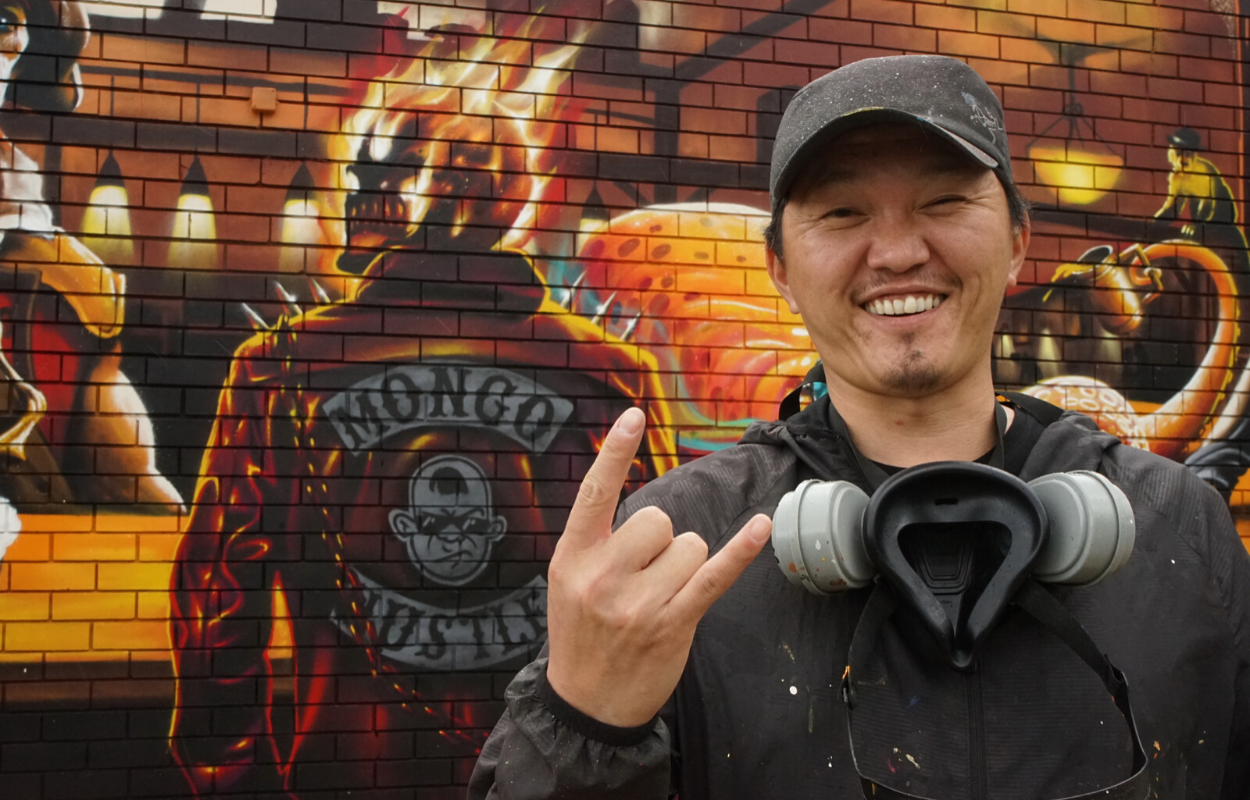 Heesco is putting rural communities on the map!

Sometimes you come across a story that just feels… right. The elements of the tale fit so well together. Right people, right place, right time. Although curveballs come hurtling at the project, you never really feel that they’ll knock the confidence and conviction of this creative collective. This is the story of how Yarram became covered in art.

Firstly, you need the right artist.

Khürelbaataryn Khosnaran, aka ‘Heesco’, was born in Ulaanbaatar, Mongolia. Enrolling in the Sydney College of Arts and moving to Australia as a 20-year-old, Heesco then relocated to Melbourne in 2010. The city became home for him, his wife and their two young daughters.

Yet through his large-scale artworks, Heesco has seen far more of Australia than most, especially when it comes to our rural communities. Similar to his city-based work, Heesco’s world-famous silo artworks located in Grenfell, NSW (pop. 2,573), and Weethalle, NSW (pop. 307) are both rooted in a sense of place. When Gippslandia calls, he’s in Finley, NSW, (pop. 2,519), just knocking off from another long day painting. Open the atlas — can you point to any of these towns? We dare you! Yet, here’s Heesco, putting them on the map.

With Heesco painting his way across the country, it’s not outrageous to think that he’d eventually find his way to Gippsland.

But it is a unique relationship, nearly a decade long, that led Heesco to Yarram (pop. 2,135).

Meet the next key characters in this tale: Wayne and Anne Tindall. The Tindalls moved to Yarram about three years ago and are the proprietors of the cool Bull Bar and Gallery.

Previously, while living in Windsor in the early 2010s, Anne opened a small gallery, which the couple lived above, off an unnamed laneway. The long alleyway wall was perfect for painting, and with approvals in hand, the couple invited well-known street artists to come get creative.

Heesco heeded the call, and he and Wayne became firm friends, going on to paint many Victorian skate parks together, including the Foster park.

Keen to increase the vibrancy of the Bull Bar, the Tindalls asked Heesco to paint a huge Spanish fighting bull on the inside wall of the bar.

The striking result caught the attention of local Yarram identity Eric Greenaway. Eric, being a sharp cat, saw an opportunity to collaborate with a famous, internationally-recognised street artist to paint a number of highly visible building facades in town — creating a more lively aesthetic to Yarram and a drawcard to boost tourism.

This team hatched a wonderful plan to paint 10 murals throughout the town.

Now, this project really only comes to life with the involvement of our next protagonist, the people who call Yarram home.

Heesco enthusiastically shares how the community embraced him.

“It was really cool. The school kids would come out and chat… there was a video being made of the project too.”

“People would share their interesting stories. The paintings are local content, which made the experience easier… The murals tell the historic story of Yarram, and it’s a proud community.”

East Gippsland endured the bushfires, and then Covid-19 struck, but Heesco believes the paintings provided an outlet for the town, a colourful distraction in the repetition of lockdown as barren walls disappeared and local identities and icons emerged in their place.

Heesco repeatedly shares his appreciation of the incredible hospitality he enjoyed in Yarram.

The project would have been a hell of a lot harder for him otherwise, as Heesco explains that completing murals at this scale is quite physical and the threat of burnout looms. The painting of the Coffee Palace took three to four days, and about six weeks has been devoted to the project so far. Still, Heesco says, “It’s a really great gig to land. I’m flattered. It’s such a rare opportunity.” Many other artists have been quizzing him on how such a massive project was possible.

The town’s hunch has started to pay off, as they’ve garnered broad swathes of media coverage: locally, nationally and internationally, across print, radio, TV and the Interwebs. Heesco amusingly shares that this project has pushed his profile out further than ever before, to the point that now Mongolian society is talking about him more.

Heesco reveals a project like Yarram is one of his ways of giving back to “the people who make Australia”. That he’s, “doing something for people who appreciate [the work]. Painted walls are abundant in Melbourne. Why not in small towns too? They deserve it… Young people need to see art”.

With the right people in place, a project can thrive, becoming greater than the sum of its parts. Enlarged. Amplified. Like the scale of Heesco’s paintings adorning Yarram’s buildings.