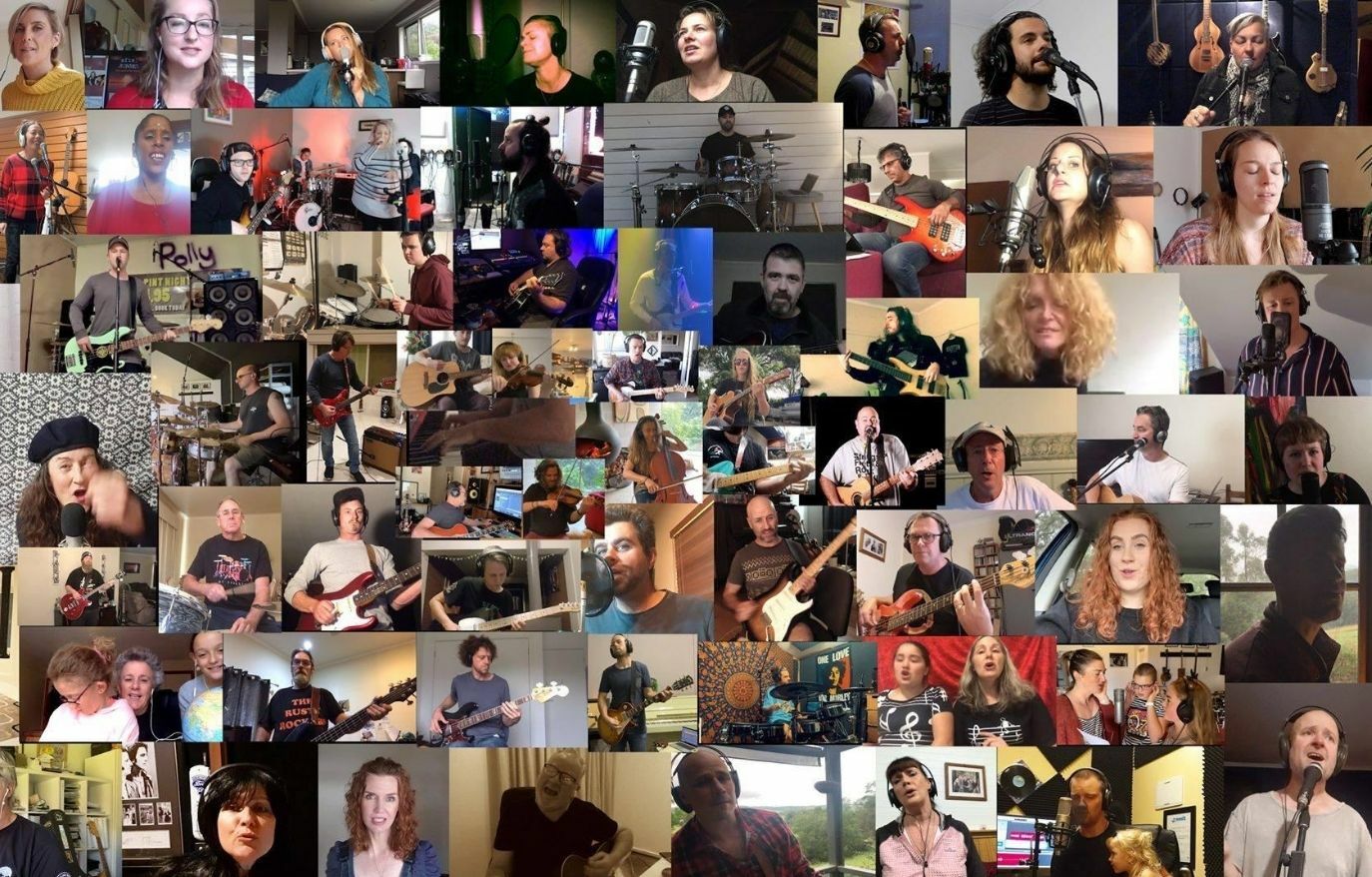 Let’s hear it for Gippsland’s Mass Online Band and their cracking collaborative musical project covering INXS’s ‘Never Tear Us Apart’ during the depths of the Covid-19 isolation period.

Imagine you and over a hundred of your musician mates covering an iconic song from one of Australia’s most beloved bands. But your new mega band will never collectively set foot in the same location during the entire recording process.

Then, with your song blowing up on YouTube, chalking up thousands of views, the band — INXS — acknowledges your heartwarming homage.

Let’s hear it for Gippsland’s Mass Online Band and their cracking collaborative musical project covering INXS’s ‘Never Tear Us Apart’ during the depths of the Covid-19 isolation period.

When project instigator Brett Glover, of Live at the Bundy and Live at Spectrum fame, suggested the concept to Gippsland’s music community, he described it beautifully as a “community quilt”, and that while the region’s musicians “are all currently segregated, we can never truly be torn apart”.

Seven years ago, the Live at the Bundy community started as a project to showcase musicians in the best sounding venue they could possibly create. Using this medium, Brett believes they “created connections and relationships that could never have been forged over social media”.

"When you give to a community, the returns are immeasurable”

“[With our] strong following, we are determined more than ever to help out when our community is in need and provide a place to celebrate.”

The Mass Online Band, forged from this community, fulfils what Brett describes as, “The need to not only be included, but accepted… when you give to a community, the returns are immeasurable”.

Let’s hear more on this uplifting project from some of the musicians who formed this talented collective.

The best bit was getting to sing through a Royer mic.

The best part was seeing the final result.

The best part was to play a piece that would contribute uniquely, [which was] done by our many musician friends. Then, of course, the pride in seeing how far and wide this [clip] was shared and appreciated, even by INXS.

It was great collaborating with so many talented locals, then how well it turned out and was received by so many people.

A highlight was getting to work on a project with my son, Keiron, who enjoys any form of drum. Then it was having it put together with so many other excellent performers.

Seeing his face when he spotted us in the video with everyone was another special moment too, for him I think that was the best part.

My band and I are from Germany and we toured through Australia in January, playing a concert in Gippsland.
[Project] initiator Brett declared me a real Gippslandian now and I really feel connected to the community, even though Gippsland is on the other side of the world!

This project satisfied many of the reasons [why] I love playing music: Contributing to the community — especially during a time of stress, fear and uncertainty; doing something for the sole reason that it might make someone smile; and, that it makes the world ‘nicer’ for a moment, rather than the pursuit of profit or political agenda.

[It was cool] collaborating with so many amazing musicians. And, selfishly, being challenged to find or create a part that would add to the whole, amongst so many clever contributions, and as it was on a song by one of the greatest bands ever!

It was an honour to be asked by Brett, and a privilege to perform with such polished Gippsland musicians.

"It was pretty cool that the clip made its way to the INXS camp.”

I loved that we had no idea who or how many musicians would be involved; whether we’d be featured or become an important part of the bigger picture; or have any idea of what it would sound like in the end — and yet, we all did it anyway!

The Gippsland music community is amazing like that. When everything else is crazy or things are dark, the community will always step up and be the light.

The best part was being amongst amazing local artists. It ended up turning into something much more than we could have imagined and brought a smile to people’s faces during this tough time.

The best thing about live music is how it brings people together and brightens up everyone’s lives!

The best experience was learning how to play with so many talented musicians whilst still being alone.
It was a great effort brought together by Brett Glover, with Brett Tippet collating the video and Andy Steward somehow stitching the audio into a version that impressed us all — even INXS!

It made me feel good again. Certainly not being able to perform in public is difficult for us all, and being unable to rehearse with our bands (Doc plays with the Rusty Rockers, the John Gibson Trio) has been psychologically asphyxiating!

Thanks again to the two Bretts and Andy.

I loved being a part of this amazing collaboration because it really proved that no matter what’s going on, music unites people and makes us all equal. What a wonderful community we are a part of.

Personally, this song is an absolute favourite. INXS was such an enormous musical influence on me and, as a vocalist, I was in awe at how Michael Hutchence engaged a crowd with his vocals and showmanship.

First of all, when Brett Glover asks me to be involved in something, I’m all in, because it’s always a success (and he makes me).

Secondly, it was amazing to be able to collaborate with my fellow Gippsland musicians, especially in a time that we were unable to be out doing what we all love.

Also, it was pretty cool that the clip made its way to the INXS camp.

If you haven’t seen the amazing video yet, please visit now: youtu.be/VCDclazXGk8

Music Direction by Brett Glover; audio mixed and engineered by Andy Stewart at The Mill (themillstudio.com.au); and video mixed and produced by Brett Tippet at Spectrum Productions (liveatspectrum.com.au).