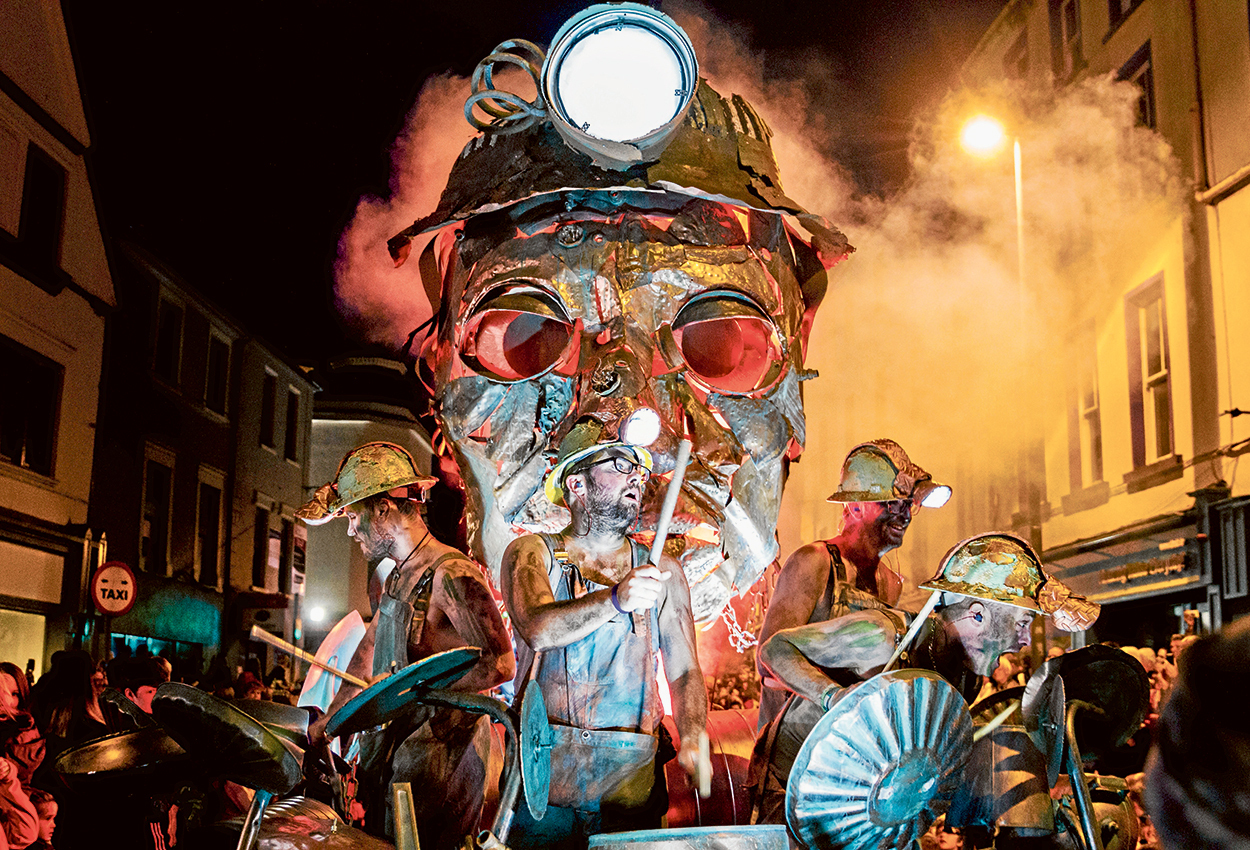 Strange music drifts through the balmy Sunday evening air. We’ve had a fantastic weekend of festivities up until now. It’s muggy, but thankfully, the rain has held off for the big event. I’m surrounded by bizarrely costumed people; fish-ladies, bird-men, frog-children and too many more creations to name. There are huge sculptural contraptions, giant floats representing all sorts of strange and wonderful creatures. It’s a sight that will ignite anyone’s imagination.

I’ve travelled over 17,500km from Traralgon to my home city of Waterford, Ireland. I’m here to perform in the closing parade of the 25th Spraoi International Street Arts Festival. And as I stand here, I think to myself, why couldn’t some kind of large-scale cultural festival like this be done in Gippsland?

‘Spraoi’, pronounced ‘spree’, is the Gaelic word for ‘fun’ or ‘play’ and the festival started out in 1993 with this in mind. Things quickly took root as people began to show support and it has become a well established and cherished event. Spraoi now takes place over an entire public holiday weekend in August that is now more commonly referred to by locals as “The Spraoi Weekend”. Waterford’s narrow medieval streets, squares, quays and historic buildings provide an atmospheric backdrop for an array of international street artists, performers and musicians, who perform all over the city for three days. The event culminates in the annual Spraoi Parade that makes its way through the city on the final night of the festival. The best part about it, because most of the staff, crew and parade performers are volunteers, the festival is free.

Over the years Spraoi has become a sort of summer Christmas in Waterford. A time when people come back from wherever they now live, be it Dublin, Europe or further afield, and use the weekend to reunite with old friends, see bands and performances or maybe even perform themselves. There are people that I only ever see over Spraoi Weekend, and of course, for me, this has become the reality too, as I’m only able to go home to Ireland once a year.

Why is any of this relevant to Gippsland or the Latrobe Valley? Well, simply, as best I can tell, Gippsland doesn’t have its own equivalent to Spraoi, and I think it should.

It comes down to pride, positivity and cultural identity.

The Latrobe Valley has more than double the population of Waterford city, although, notably, Waterford has a single central point, compared to the Latrobe Valley having its population split across a few smaller towns. Also, I’m not expecting the Latrobe Valley, or even the wider Gippsland region, to create its own street art festival, as there are many reasons why it wouldn’t necessarily work the same way as it does in Waterford. However, what would be great is to see something the people of this region can really get behind and embrace in the same way the people of Waterford get behind Spraoi festival.

A ‘Gippsland Gathering’ held in each town? Why the heck not?! What makes the festival so important in Waterford is that it creates a positive cultural identity where people are able to forget about all the crap for a second and say, ‘Hey, you know what, this place is pretty bloody great!’ If asked the question, ‘What’s the best thing about Waterford?’ many people will reply with ‘Spraoi, of course!’. And now more than ever, the Valley’s sense of community pride needs a lift.

A situation similar to the closure of Hazelwood struck Waterford too. The first thing that usually springs to most people’s minds when they think of Waterford is the world famous Waterford Crystal, that’s been manufactured in my home city since 1783. At its peak, it employed up to 4,000 people. By the late 2000’s many of those jobs had already been cut and in 2009 both manufacturing plants in Waterford were shut down with the loss of about 1,100 jobs. It was catastrophic for the city. As with Hazelwood here, everyone knew someone who worked there. The knock-on effect was a total lack of confidence in ourselves. Spraoi was there for the people and since it’s free people were able to go and enjoy themselves without having to worry about spending money they didn’t have. Since then the city and economy have recovered, and the city and festival have grown tenfold. Spraoi Festival is now partially sustained by public donations, with the rest made up of government grant funding.

Don’t get me wrong, there are lots of wonderful individual events across the Gippsland region now, but no festival that I know of takes place across Gippsland simultaneously on the same day or weekend, under the same name. Traralgon’s Summer Nights Festival, the Chinese New Year Festivities, Shakespeare on the River at Stratford and The Boolarra Folk Festival are some that spring to mind as heading down the right path.

Why not have a festival celebrating Gippsland? Across Europe, there are many other festivals doing the same. The Bavarians are proud of Oktoberfest, West Germans have Cranger Kirmes, there’s the Venetian Mardi Gras and Il Palio in Italy, La Tomatina and Feria de Cascamorras in Spain, Scotland has the Edinburgh Fringe Festival and there’s Glastonbury in Somerset, England. In fact, most of Europe has a carnival street celebration in some shape or form, and many neighbouring towns or regions compete against each other to celebrate in an ever-increasing fashion. Gippsland has a hugely diverse population, from our indigenous peoples to migrants from all over the world. Perhaps we can celebrate our diversity and mixed-cultures in our Gippsland Gathering?

Who knows what form our Gippsland Gathering may take, but I for one would welcome a reason to celebrate this wonderful region. After all, I’ve moved across from the other side of the world to live here.