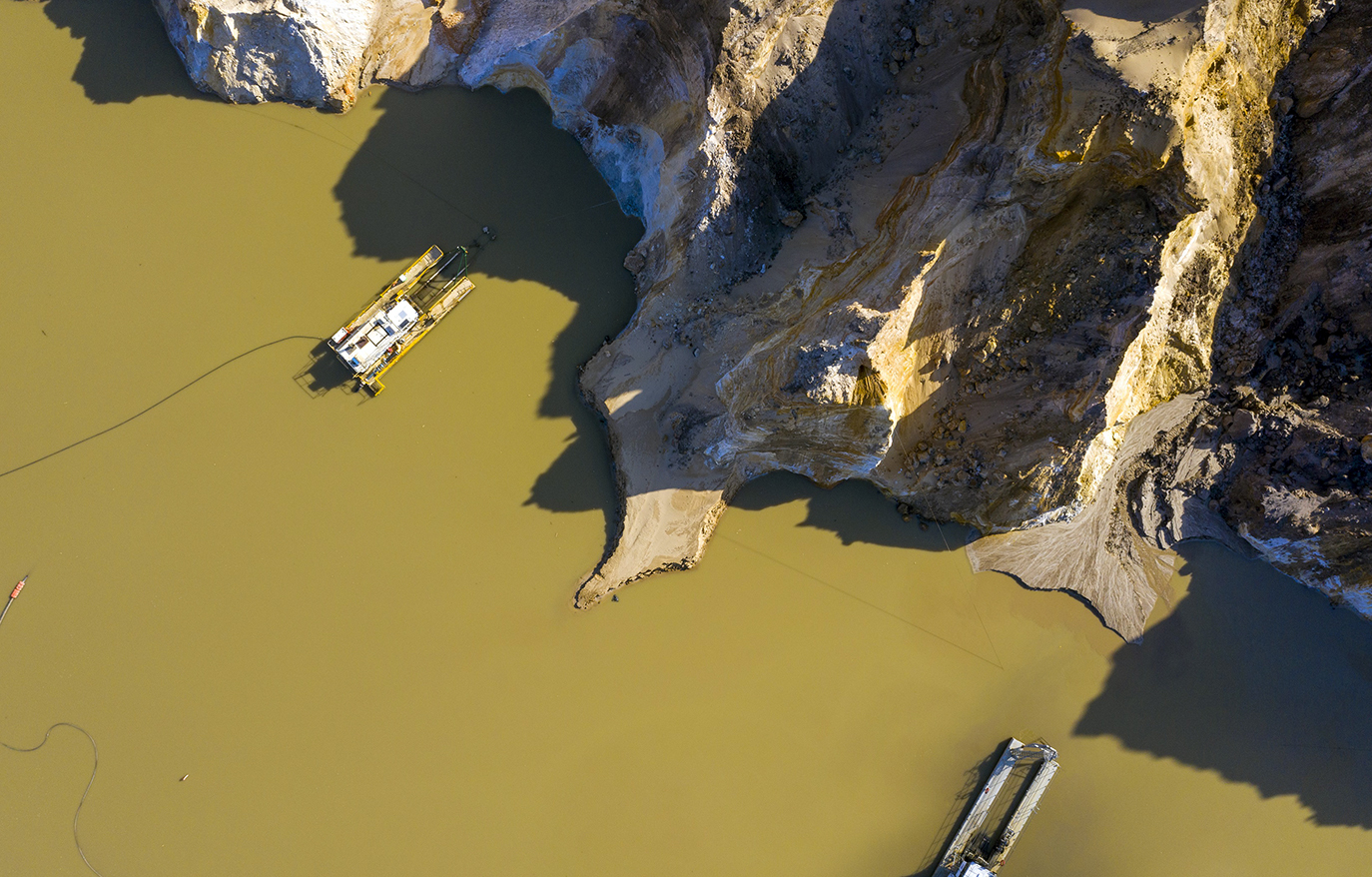 When sand is so much more.

Should Western Port’s last remnant coastal forest be torn up to supply cheap sand for Melbourne?

In August 2019, I returned to Melbourne after two years living in the United States. Pausing to contemplate our future, my partner Gerard and I spent a few months camping up through the Ikara-Flinders Ranges and Tjoritja (West MacDonnell Ranges). By chance, we saw this country at the peak of a drought in the hottest, driest year on record.

We returned to Melbourne on Christmas Day, with fires raging around the country. Growing up, summer meant time outdoors: camping, relaxing and enjoying the beach. But on this New Year’s Eve, I watched in horror as the coastal wilderness around Mallacoota was turned into a hellish inferno.

“The Melbourne of my birth had just under three million people...”

The Melbourne of my birth had a population just under three million people. Returning in my 30s, the population is approaching five million. The increase in congestion, traffic, expense, stress and general difficulty of living was palpable.

Gerard and I turned up to one rental inspection to discover the small two-bedroom house was packed with over 100 other ‘hopefuls’. Luckily, we could afford the rent. We even offered more money than what was advertised, but our application still wasn’t successful. Plan Melbourne sets out a roadmap for the population to reach eight million by 2050.

Who wants this? Is this necessary? I wonder.

The idea of moving out of Melbourne became more attractive and we moved to Inverloch in January 2020. Working remotely, we settled into the relaxed coastal lifestyle and congratulated ourselves on escaping the pressures of the city.

We were doubly grateful after the lockdown hit. My sanity was stabilised by long walks, where I found refuge in nature and the far horizons of the ocean. Bushwalking in places like the Gurdies Nature Conservation Reserve uplifted my spirits and imbued me with an invaluable sense of peace and connection.

Later, in the spring, after the regional lockdown was lifted, I was lucky enough to stand in a field surrounded by thousands of flowering grass trees near Mallacoota. Like the insects buzzing around me, I felt drunk with wonder as the glowing candlestick stalks alchemised honey-scented nectar – such sweet goodness – out of soil, air, water and sunshine. Flowering in defiance of the deadly fire that had swept the entire region earlier in the year, the grass trees seemed symbolic of hope, and the miraculous strength of nature.

Back home, a few weeks later, I opened an email and was shocked to see photos of hundreds of grass trees from the Grantville Grass Tree Forest – many standing more than two metres high and likely pre-dating European arrival – had been dug out and bagged for translocation to expand the operations of a company that supplies sand for the construction industry.

Word of the devastation spread quickly. The community rallied. Locals Laura Brearley and Terry Melvin produced a short film, The Cost of Sand to raise awareness of the need to conserve the greater Western Port Woodlands forest corridor. A planning application by Dandy Premix, another sand mining company, to double their operations received 73 notices of objection. The brand new Bass Coast Council moved swiftly to pass a motion to bring scrutiny to the sand miners, but the State Government also moved fast.

Dandy Premix is on the Extractive Industry Priority Project List and Planning Minister Richard Wynne swiftly ‘called in’ their application, taking the decision out of the hands of the local community and Council. The letter of notice referenced sand as a strategic resource for Melbourne’s construction boom.

Alarmingly, much of these woodlands has been identified since the 1990s as an Extractive Industry Interest Area. Now Victoria’s Planning Minister has his sights so firmly set on extracting the sand that lies beneath to feed a doubling of Melbourne’s population by 2050 that he recently gazetted the SERA pilot program (Strategic Extractive Resources Areas) to enable sand mining to be fast-tracked, with no community or local council notification or input. More than 3,700 people have signed a petition calling for a moratorium on new sand mines until the forest is protected.

Unfortunately, the very same Planning Minister, Richard Wynne, also has authority for developing the planning framework to preserve the natural values of the Bass Coast, which has been declared a Distinctive Area and Landscape. The Western Port Woodlands forms a substantial part of the biodiversity value of the district, which underpins our visitor economy. This seems like an untenable conflict.

As I learned more about the broader political context, I realised that those dead and dying grass trees that sat in untidy piles on the quarry edge were a distillation of the dark underbelly of Melbourne’s ‘green’ economic recovery.

In short, construction stimulus = demand for concrete = demand for sand. It’s not that sand is scarce, there are abundant deposits available on already degraded land. Table 8 in the Extractive Resources in Victoria: Demand and Supply Study 2015-2050 shows existing work authorities contain, enough for more than 500 years of supply. The question is one of values. These sand deposits under Western Port’s last remnant coastal forest close to Melbourne are deemed the lowest cost. Some might say the free market is working perfectly, but anything appears cheap when we don’t account for the cost of our environmental and cultural heritage.

If we lose the woodlands, we will only be able to tell our children stories about the powerful owls, southern brown bandicoots and rare orchids that used to inhabit Western Port. They will never get to see them, or be uplifted by walking amidst the messmate and manna gums. If public policy debate has narrowed so far as to only consider economic consequences, then how will the region retain its visitor economy if all our beautiful spaces are destroyed, and the roads are clogged with sand trucks?

By moving out of Melbourne, smugly thought I’d outrun the plan to grow the city’s population. But endless growth is omnipresent, and it’s followed me to the Bass Coast.

That’s the hidden power of this economic theory that operates outside a frame of reference that the Earth’s resources are finite. It retains no memory of what has already been built – it’s never enough. There’s also no memory of what has been destroyed – the beauty and abundance lost. And what if Melbourne does reach eight million people by 2050? Will it stop there? Or will we hit 10 or 12 million? Where does it end? Nobody ever says.

The flipside of growth is grief. These days, as I marvel at the beauty of nature, I find myself simultaneously wondering when it might be destroyed or irrevocably altered. It’s become a habit to say goodbye to places, just in case they’re gone before I return. Goodbye to the Djab Wurrung Directions Tree and Juukan Gorge. Goodbye to the Great Barrier Reef and the 2000 species at risk of extinction in Australia. Goodbye to memories of carefree summers, before they became filled with smoke and fire, dread then fear.

“But I've had enough of saying goodbye to special places."

But I’ve had enough of saying goodbye to special places. That’s why I’m working to save our Western Port Woodlands.

The solutions begin with talking about how we want to live both now and in the future. How can we live within a society that does not need constant growth, fed by resource extraction, to flourish?

I don’t ask for much. Just a future that I can look forward to with optimism, instead of facing an ever-growing pile of goodbyes.

Lauren Burns is a resident of Bass Coast, living in Inverloch. She is on the executive committee of the South Gippsland Conservation Society and has been involved with local campaigns to Save the Holden Proving Ground that has expanded into Save Western Port Woodlands, which aims to protect the last remnant forest of Western Port. This is one of the most important local environmental issues in our region.