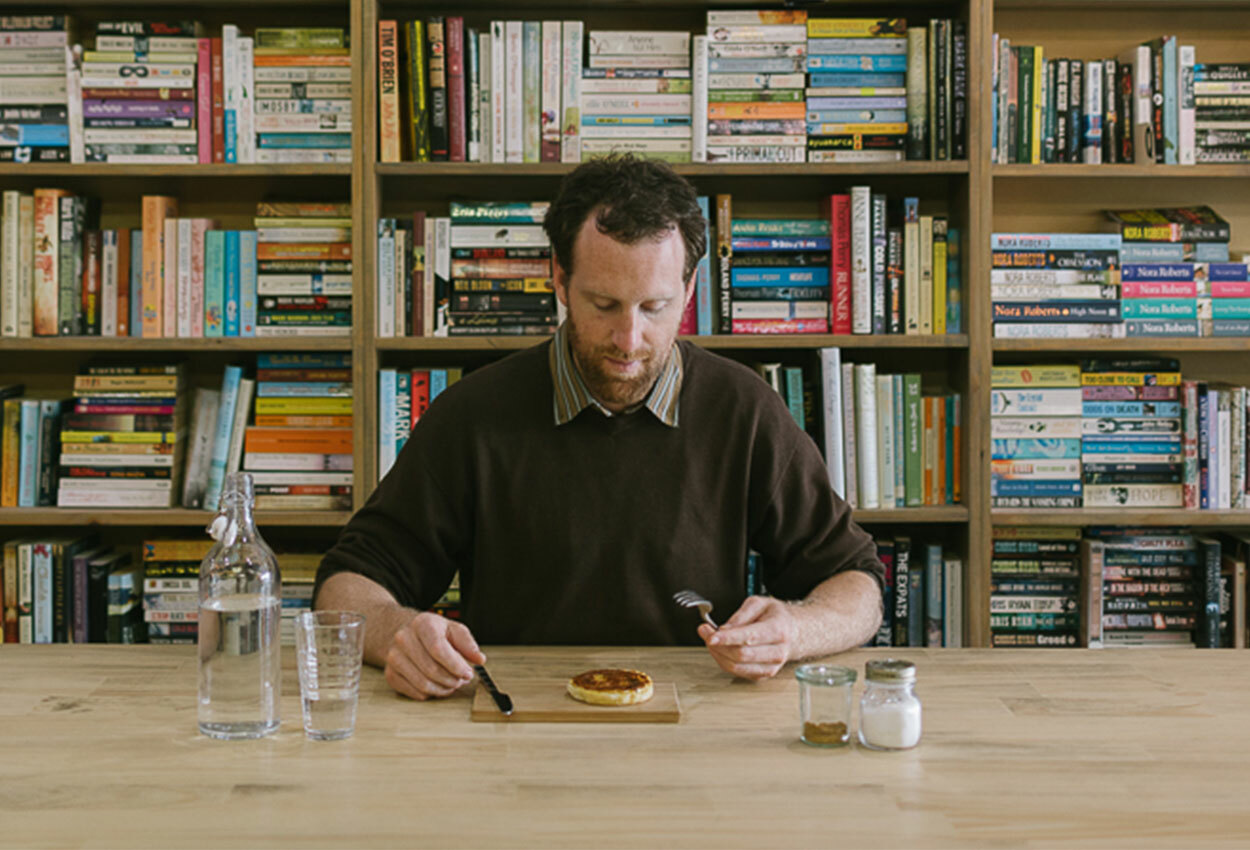 They call him Dan.

Faced with the converging crisis of climate change and economic decline, Dan Musil sought a solution different to the norm.

Dan was raised with a pretty strong social conscience. Instilled with a belief that we can, and more importantly should, make the world a better place for everyone. Since he first began studying, Dan’s been active in community organisations, immersed in the questions relating to social and environmental justice. Working in disability support, hospitality, as a musician and construction labourer also left an impression on him. His Honours project fostered dialogue and education between environmental activists, workers in the power industry and communities, and his ‘alleged’ PhD explores community economic projects, like the Earthworker Cooperative, in their efforts to help the Latrobe Valley in transition.

As Dan exclaims, “Looking at the enormously devastating impacts of climate change and seeing a world full of inequality and injustice in a system that’s failing so many – it’s powerful motivation to want to do something, anything!”

Dan is driven by a desire to move beyond simply opposing ‘bad things’ in society to being involved in creating working alternatives – ways of organising our communities and economies that better serve and prioritise people and the planet. Giving economic power back to communities and workers, not profit-focused corporate boards. This drew Dan to the sweeping, yet practical, vision of the Earthworker Cooperative Co-Founder Dave Kerin (now retired from the project), which was aimed at moving past the ‘jobs versus the environment’ debate.

Dan has patiently outlined the motivation behind the Earthworker Cooperative and the ethos that continues to guide the group’s significantly different approach to traditional business development.

Australia, and the world, is currently facing two interrelated crisis; climate change and economic decline, particularly the continued weakening of Australia’s manufacturing industry. Due to these threats, and inaction from governments and a business-as-usual approach by many corporations, the Earthworker Cooperative was formed as a creative response to address the present situation. In addressing these issues, it seeks to bring together people from diverse backgrounds – including businesses, unions, church and other faith-based groups as well as environmental activists and social justice advocates, including indigenous groups.

As Dan explains, “Earthworker is a worker-led cooperative movement based in Australia, building a network of worker owned cooperatives. Providing dignified, democratic and community-based livelihoods in sustainable industries”.

Two previous worker struggles, the historic Green Bans in the 1970s-80s, whereby construction workers in the Builders Labourers Federation (BLF) elected to ban work on socially and environmentally harmful projects, and the Bluey’s, Boots and Overalls’ campaign for adequate protective employee workwear, have been instrumental in informing the Earthworker mission.

Firstly, workplace democracy at the enterprise level is a core goal, giving employees the power to decide the nature of their work and how this work affects or supports the communities in which they operate. Secondly, the importance and power of collectivising both production and the distribution/consumption of goods are central to the Earthworker socially orientated business model, and a key vehicle for being able to steer the economy in ‘directions it might otherwise not have taken’.

Earthworker’s first endeavour, Eureka’s Future Worker’s Cooperative, is a project to manufacture high quality solar hot water systems in the Latrobe Valley. Given the Valley’s high unemployment, there’s a greater need for further training and employment opportunities. The Valley also possesses a wealth of ingenuity and creativity, as well as a great base of skills in engineering, manufacturing and metalworking. This is a venture that seeks to offer people who currently rely on coal for their local economies a tangible alternative; one that utilises the skills base in the region and can develop a trust with communities that demonstrates a transition away from fossil fuels is possible. Therefore, a solution that seeks to address elements associated to both climate change and the decline of manufacturing in Australia.

Earthworker’s initial project was an association with an independent small manufacturer of premium solar hot water tanks in Dandenong called, Everlast Hydro Systems. With a mutual commitment to Australian manufacturing, Earthworker and Everlast agreed to collaborate in order to establish the Eureka’s Future Worker’s Cooperative in Morwell.

Originally, the plan was for Eureka’s Future to operate in its own right in Morwell, manufacturing the patented Everlast tanks under licence and distributing full solar hot water systems via union and social ‘collective markets’. While the association commenced from a strong position, changes to the government solar hot water rebates structure, the continued reduction in domestic solar photovoltaic (PV) technology and the growing influx of cheaper (and frequently inferior) imports resulted in Everlast facing an increasingly difficult financial situation.

In 2014, Earthworker made a decision to try and help turn Everlast around, believing that the closure of another small factory would be detrimental, and that it could seriously affect the possibility of establishing the Eureka’s factory in Morwell.

Unfortunately, in late 2015 – early 2016, Everlast was placed into liquidation. Despite the setback, Dan asserts that Earthworker remain committed to establishing Eureka’s Future. Currently, Earthworker is refining their business plan, have recently employed two part-time staff and hope to commence operations with Eureka’s Future as soon as possible. Importantly, they managed to secure valuable manufacturing assets and intellectual property to facilitate the opportunity for skilled local workers to manufacture premium hot water technology here in Morwell.

Over the past year, Earthworker has established a petition seeking support from the State Government to assist the cooperative through its initial development stage, including via ‘social procurement’ through an order of solar hot water systems into public housing. This would support low-income households with lower energy costs, reduce pollution, upgrade public building resources and support local green manufacturing jobs in the Latrobe Valley.

Earthworker members and supporters recently completed a 100km walk from Melbourne to Morwell to foster public conversations about the future of the Latrobe Valley, call for government support for a ‘just transition’ and raise funds to help setup Eureka’s Future factory. With over $20,000 raised, it demonstrated that there’s remarkable support for the project and for the transition of the Valley.

Dan and the Earthworker Cooperative continue to work hard to ensure the ideals and goals of Eureka’s Future Worker’s Cooperative are galvanised into reality. Ever humble, Dan’s conscious of raising people’s expectations, especially for a region that has so frequently (and falsely) been promised the world. Dan’s five-year vision for the cooperative would be a burgeoning network of Earthworker worker-owned businesses, providing dignified work and a range of sustainable goods and services; from renewable energy to industrial hemp, education and social services. Making greater contributions to a more equal Gippsland – not only providing jobs, but also acting as an example of a more sustainable, fair and resilient economy.