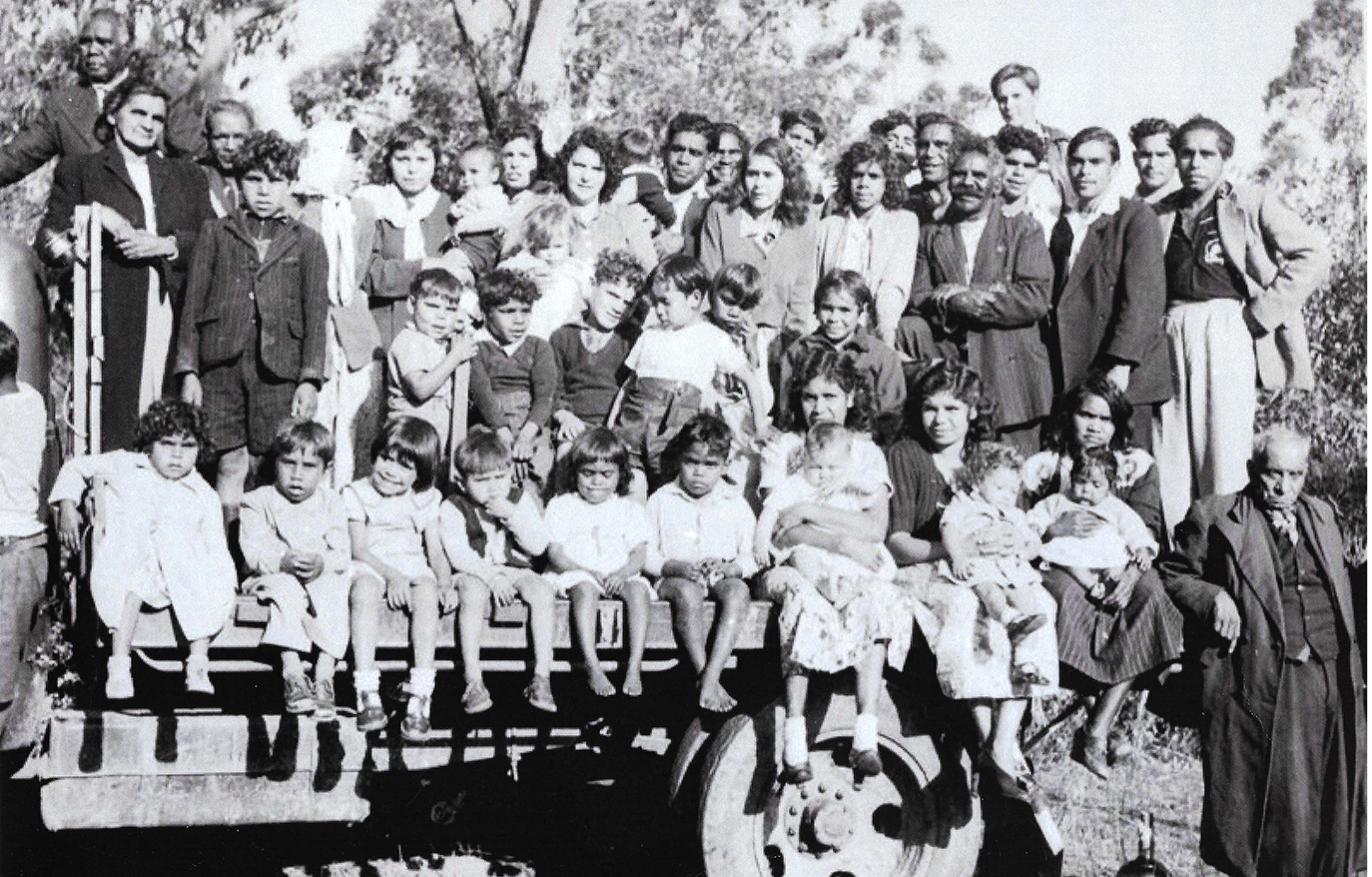 Step into the once vibrant community of Jacksons Track.

"Word got out that this was a good place."

So said Stewart Hood, son of Colin, who had been driven out of the Lake Tyers mission and began working for Daryl and Harry Tonkin on their property at Jackson’s Track, Jindivick, felling and milling timber.

The Tonkin brothers decided to help Stewart and collected his family to live on the property too.

Within two years, it became a haven for Aboriginal families, as it provided plenty of work, fresh water, wild animals and firewood. The families could become self-sufficient.

Families came from all over the state; the Victorian Government Board of Protection allowed some freedom as the families were able to manage their own affairs. For two decades, across the 1940s, 50s and 60s, up to 150 Aboriginal people lived there.

“The families were at last able to live their lives as they wished.”

There were around 50 children in the community. All the children were well looked after and never excluded from activities around the camps, which were filled with much laughter and antics. The children loved helping the men and women when they were hunting or gathering food. They loved the stories around the campfire at night and this was their education.

One day, an official-looking man came to the camps to tell the women that the children had to go to the school or the authorities would remove them from their care. A week later, the children were forced to enrol at the Labertouche Primary School, which was the closest school to walk to.

Despite the safety at Jackson’s Track, Daryl and the community could still see the effects of the Stolen Generation policy. An example was Daryl’s description of a mother standing outside her hut, across the river from where he was, leaning against the door, crying in a high-pitched sound, letting people know her heart was broken.

"There was nothing left, my heart was grieving."

In 1961, a change in government policy aimed to assimilate Aboriginal people into the white community. The Aboriginal families at Jackson’s Track would have to move into government housing in Drouin and Warragul. The authorities said that within a week a truck would come and get them.

It was either move to Drouin or be forced back to Lake Tyers.

Some Aboriginal families started to move back to their homelands. Others piled their belongings and children onto the truck. The huts were bulldozed into a huge heap, then burnt to the ground.

“There was nothing left, my heart was grieving.”

—
The above piece was derived from text prepared by Kurnai Elder Linda Mullett and Kaylene McKinnon with consultation from the Kurnai Elders Group Gippsland. 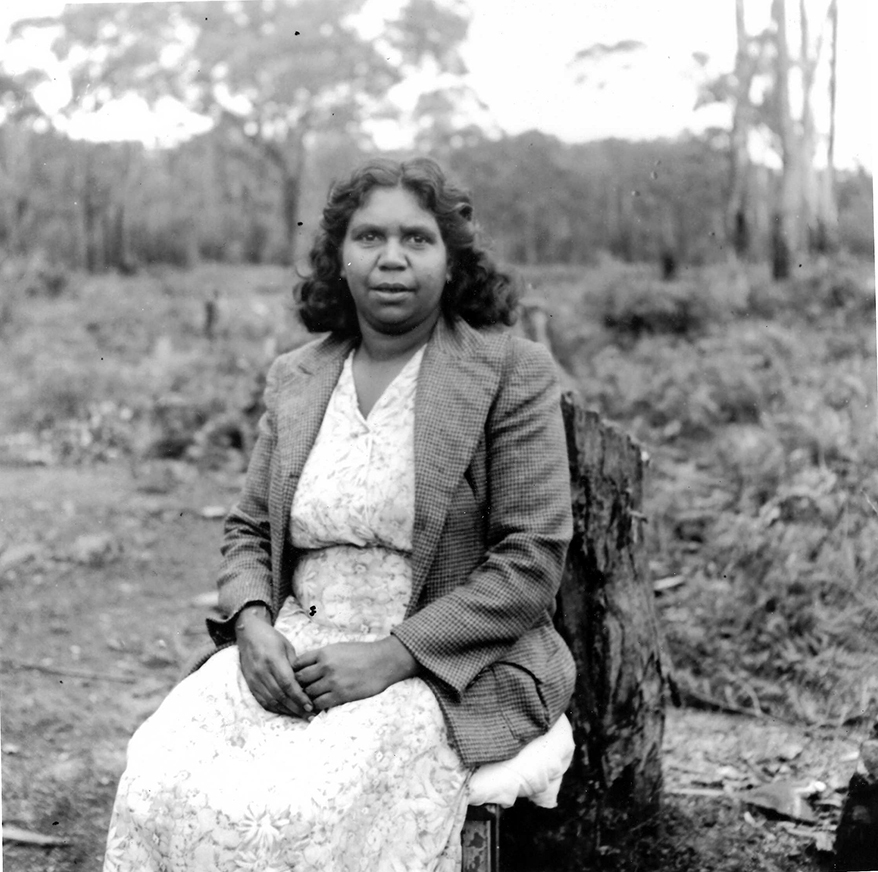 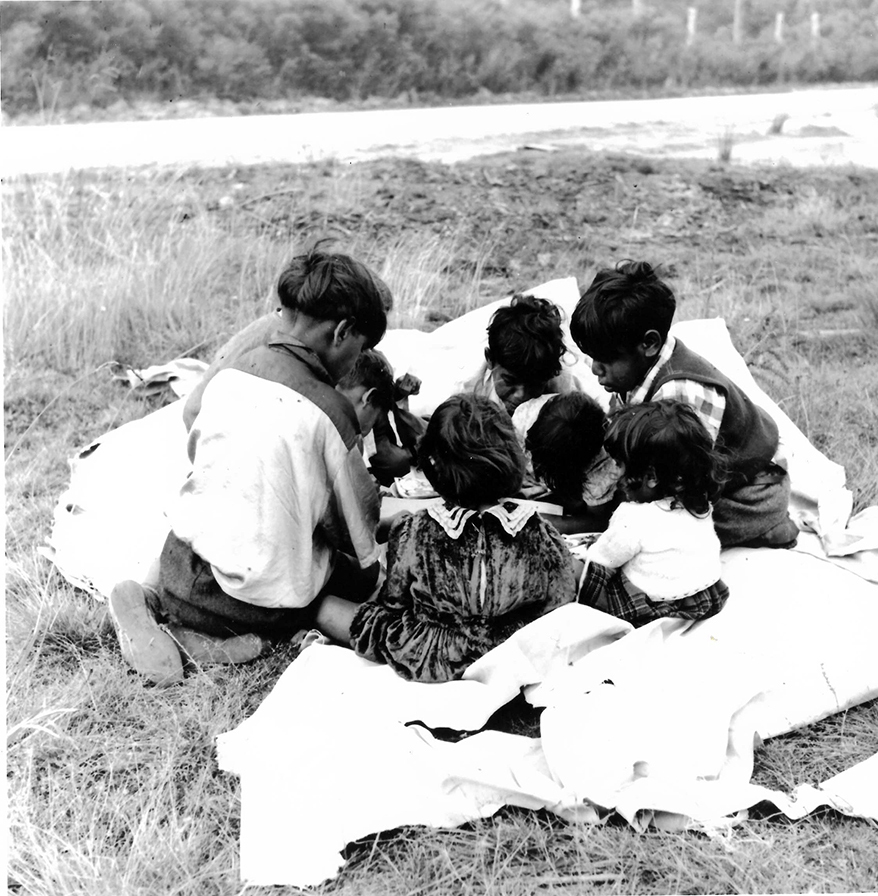 In preparing her alternative travel guide for Gippsland, Jeannie Haughton highlighted the following passage from Jackson’s Track - Memoir of a Dreamtime Place by Daryl Tonkin and Carolyn Landon.

Told through the eyes of an old man, the events are heart-wrenching.

‘Daryl,’ said my brother Harry in a more reasonable tone than Mavis, ‘it’s not natural. A white man cannot live with a native woman.’

‘How do you expect to be able to hold your head up and look people in the eye?’ My sister Mavis spat out, impatient with Harry.

‘What people do you have in mind?’ I asked.

‘Decent people!’ she shouted, spoiling for a fight that I was determined not to give her…

That stumped me. How could the happiness Euphemia and I have be against God? What God?

In the sequel, Jackson's Track Revisited: History, Remembrance and Reconciliation by Carolyn, the voices of Aboriginal people who lived at Jackson’s Track mingle with those of the white Australians who tried to 'improve' Aboriginal lives in the 1950s, the era of assimilation. Landon also investigates the nature of memory.

World Champion Boxer Lionel Rose and Daryl’s own family of Victorian badminton champions and community leaders were all raised at Jackson’s Track.

Daryl died in 2008 aged 92, and the entire property was ravaged by the 2010 bushfires. Members of Daryl’s family still live locally and have established Kurnai Nations as their business advocacy organisation. 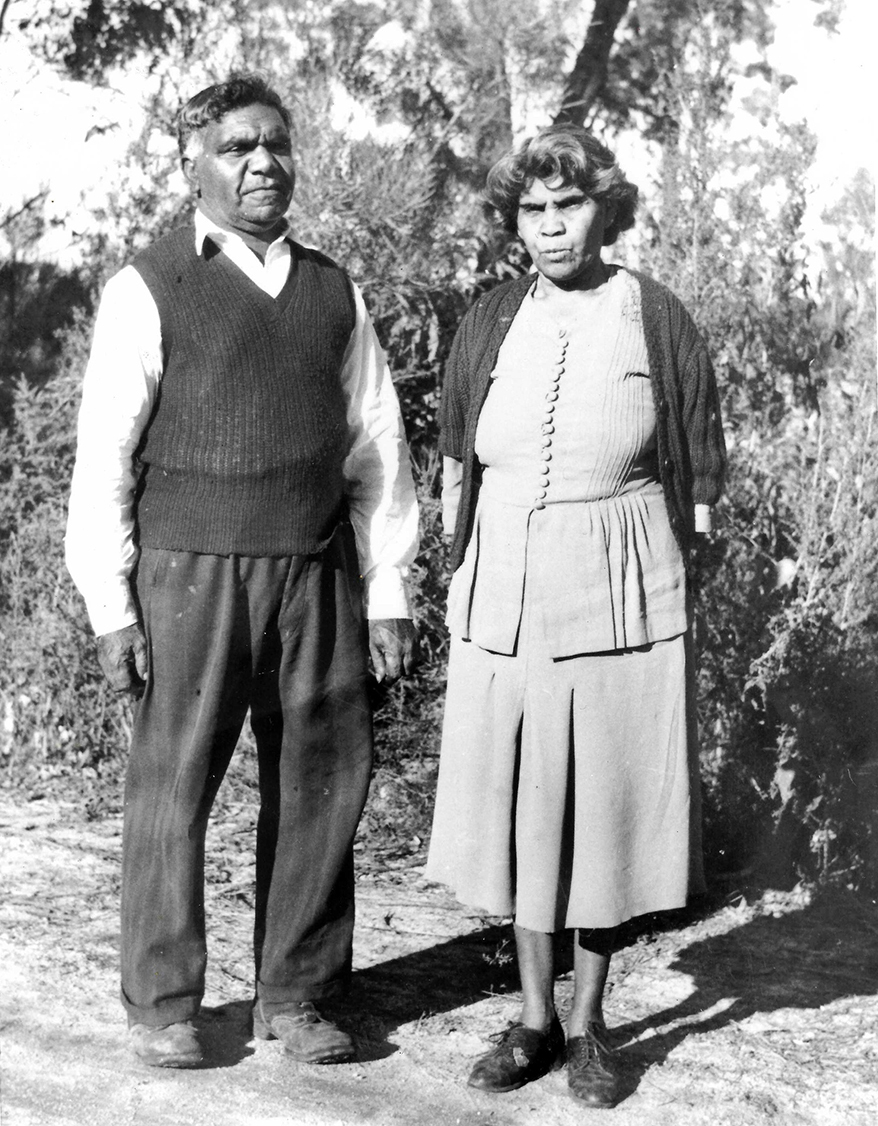 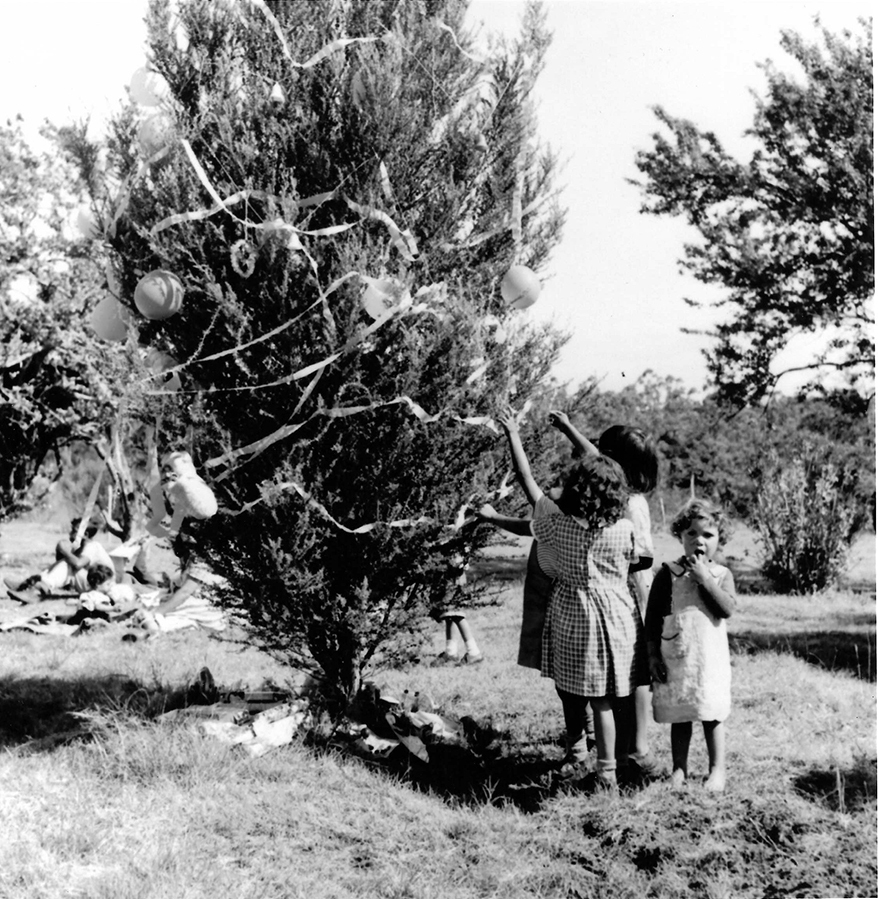 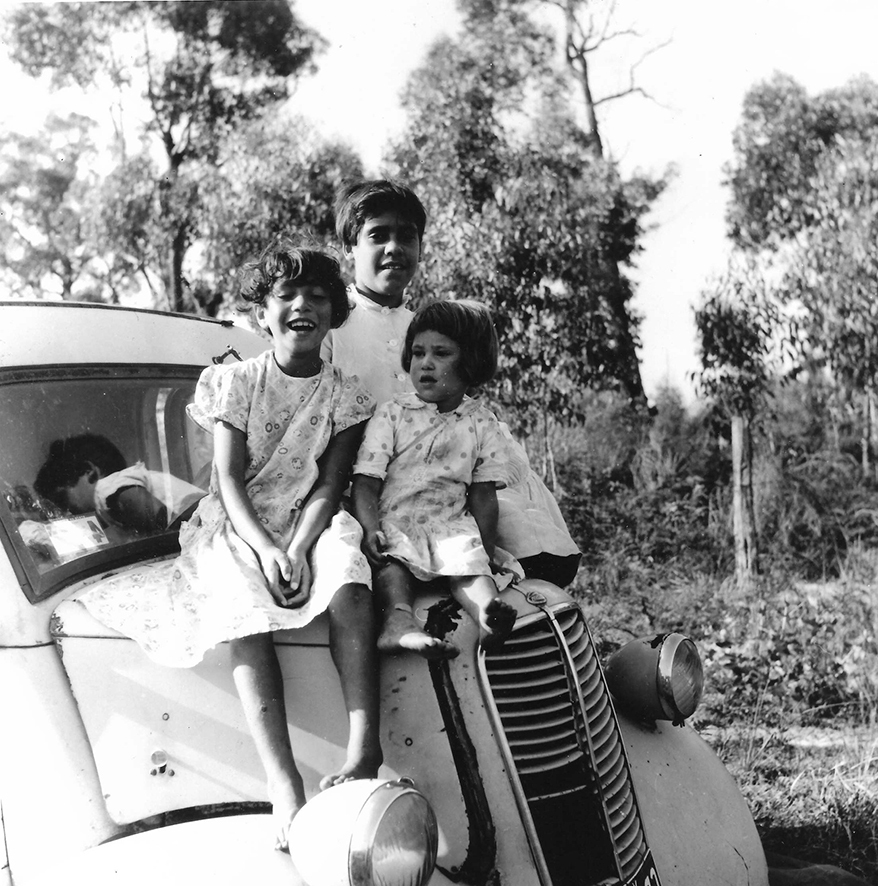 A conversation with Carolyn Landon

Gippslandia had the opportunity to speak with author Carolyn Landon on the two bestselling and award-winning books describing life on Jackson's Track.

Carolyn shared that she first started working with Daryl Tonkin in late February 1996, but that she first became involved with the Tonkin/Hood family in 1992.

In her Year 7 class at Warragul High School, Carolyn was teaching Daryl Mobourne, the son of Pauline Mullett, who is Daryl Tonkin’s daughter. Carolyn asked Pauline, the Aboriginal Liaison Officer, to come to the fortnightly library lessons and tell the kids stories about Aboriginal life.

Finally, at the end of 1995, Pauline approached Carolyn with twenty handwritten quarto-sized pages, saying that this is Daryl's book and asking if she could get it published.

Carolyn read it on the spot.

“At first Daryl was surprised I asked him about his emotional life instead of how a logging operation worked...

“My job was to listen to what he was telling me and ask questions that would deepen the story, get down to his feelings about himself and his life among the ‘blackfellas’.

“There was much laughing, but also many tears, yet no embarrassment. We came to trust each other.

“Throughout, however, Daryl was not sure how much he had a right to speak about his Aboriginal family. Although he talked freely about the men he worked with, the deep friendships he had with them, the tenderness he felt for their children and his own children, he never wanted me to meet his wife, Euphemia. He was worried about what she would think, but in the end, not long before she died she let it be known that she knew all about the book.”

In writing Memoir of a Dreamtime Place, Carolyn says she accepted Daryl’s view and worked hard to keep her own at bay. In fact, because Reconciliation debates were raging at that time, she stopped reading other related pieces to keep his voice as pure as possible.

When Carolyn began to interview people like Aunty Gina Rose, Dot Proctor, and others for Jackson's Track Revisited she found multiple layers of story and points of view occasionally contradicting Daryl’s version: “I had to figure that out and decide for myself how to respond to the varying stories”.

Carolyn explains that in researching the second book she also learnt that “the strength and pride of the Kurnai people was extraordinary to me”.

“Daryl rarely spoke about the pride, the knowledge, the courage of the Kurnai to stand up for their group. He loved the people on the Track, but clearly knew he had no right to speak about these things… although he must have known about them. Instead, he saw the tragedy of their being pushed around by an entitled and ignorant regime which made them victims and made him a victim as well.”

Finally, Carolyn shares the very last page of Daryl’s story, which was initially presented to her in his handwriting. Matter-of-factly, Daryl had written:

“A group of Christians who were white people and who didn’t understand blackfella ways and bush living dogged the blacks trying to make them change their ways and give up the bush. They held a meeting in Drouin and decided to separate the blacks from each other and the only way to do that was to move them away from the bush and make them live in separate towns. They had nothing to do in the town so they drowned their sorrows in drink which affect[ed] their health and they died one after another…”

Then without a comma or a semicolon, he added…

Those were the last words of his story, no further explanation.