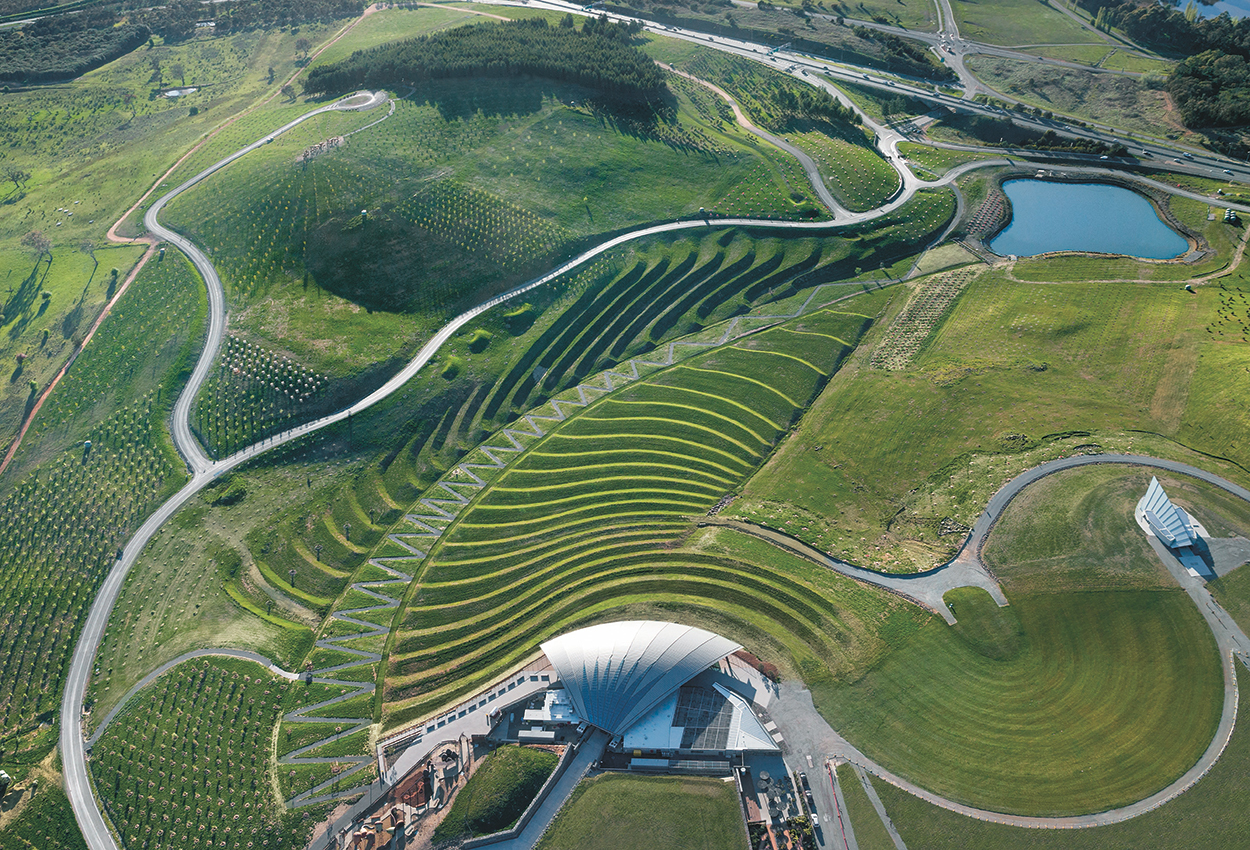 A Director at T.C.L, Perry Lethlean has a talent for designing beautiful, engaging and immersive landscapes.

With his Australian Garden (Cranbourne) and National Arboretum (Canberra) projects winning the award for ‘Landscape of the Year’ at the World Architecture Festival, 2013 and 2014 respectively, Perry Lethlean has a talent for designing beautiful, engaging and immersive landscapes that optimise the best elements of a site. Perry, the Director at the Melbourne office of T.C.L (Taylor. Cullity. Lethlean), is not only considered as one of Australia’s leading contemporary urban and landscape designers, but one of the world’s best talents. Perry has kindly opened his sketchbooks to present the initial ideas behind some of his award-winning designs.

With his father receiving a job at the Hazelwood mine, Perry moved to Morwell when he was four-years-old and lived in the region until departing for RMIT University in Melbourne. He has fond memories of Morwell. “It was a vibrant town, with lots of sport and social activities,” he said. When reflecting on the closure of Hazelwood Perry had this to add; “…the SEC, in those days, was a very powerful influence on the life and culture of the Latrobe Valley. It was extremely important and our lives centred on that relationship to Hazelwood, Yallourn and Loy Yang (power stations). I hope those really strong memories aren’t erased with the closing of the mine. In a way, I think that we should celebrate that history and not forget it”.

Perry explains, “landscape architecture is a broad discipline… there is everything from regional planning, to small-scale garden design, and each one of them is equally valid”. Perry’s mother, Pam Lethlean, is a very talented painter and she frequently took her son on excursions into the Strzelecki Ranges, where she would either photograph scenes for her artwork or paint on-site. These adventures instilled a strong connection to the environment and our Australian bush in Perry. He also believes that he’s inherited his mother’s, “…sensibilities about art, composition and arrangement of landscape”. During university, Perry's trip to Japan also left him with indelible memories as he studied. "How they arrange their gardens, their strong compositions - the artistry of landscape architecture and garden making," he said.

As is sublimely shown here, Perry still enjoys designing a lot of his projects in his sketchbooks, as he’s frequently heavily involved in the beginnings of a project. It’s in the initial stages of a design that Perry’s interested in, “What the storytelling is that might reinforce a sense of place or a narrative of culture or site that’s important. How can we enhance an area?” Perry states that he may land on a design in 20 minutes or it might take 20 days, it just depends on whether the design resonates early. From the sketchbook, the design will be developed on the computer, where Perry and his team will test the composition, form and arrangement.

When asked about the assets Gippsland has when developing our public space, Perry explains, “Gippsland is such a vast landscape. I think that we must herald its diversity, from broad lake environments to river systems, mountains both to the north and south, and there are connections through to the coast. It’s an incredibly diverse landscape”. T.C.L is involved in some aspects of the Port of Sale Precinct Redevelopment. Perry describes the process and rationale of the design, “The great asset of Sale is its waterfront – a hidden jewel. Part of the work is about fostering new connections, both view lines and physical connections, down to that waterfront so it’s a brilliant asset for the community.

Then it’s about creating spaces in which people come together, at all ages, and enjoy the natural environment. Thirdly, it should be about communicating the unique culture of this space, both indigenous culture and more recent colonial culture, in terms of the history of the site”.

Posed with the question; “Can well-designed public space promote creativity in a community,” Perry responds; “Public space can be a facilitator, but it doesn’t necessarily elicit creativity in its own right. You can create spaces that people and community can come together so that activities can be programmed in that space. If we set the spaces up for events, markets, cultural overlays, music, art, performances, etcetera…then, yeah, it can actually be a very strong advocate for creative culture”.

Finally, when pressed on which Gippsland location he’d love to work on, Perry explains his interest in waterfront design and that it’s the ‘wonderful waterfront context’ of Lakes Entrance as a site he’d love to be involved in redeveloping. Stating that "It's sort of totally unique in an Australian context and, subject to funding, there are some wonderful opportunities there to make it even better," Perry said.

An exciting prospect for the region, we’re sure you’ll agree.