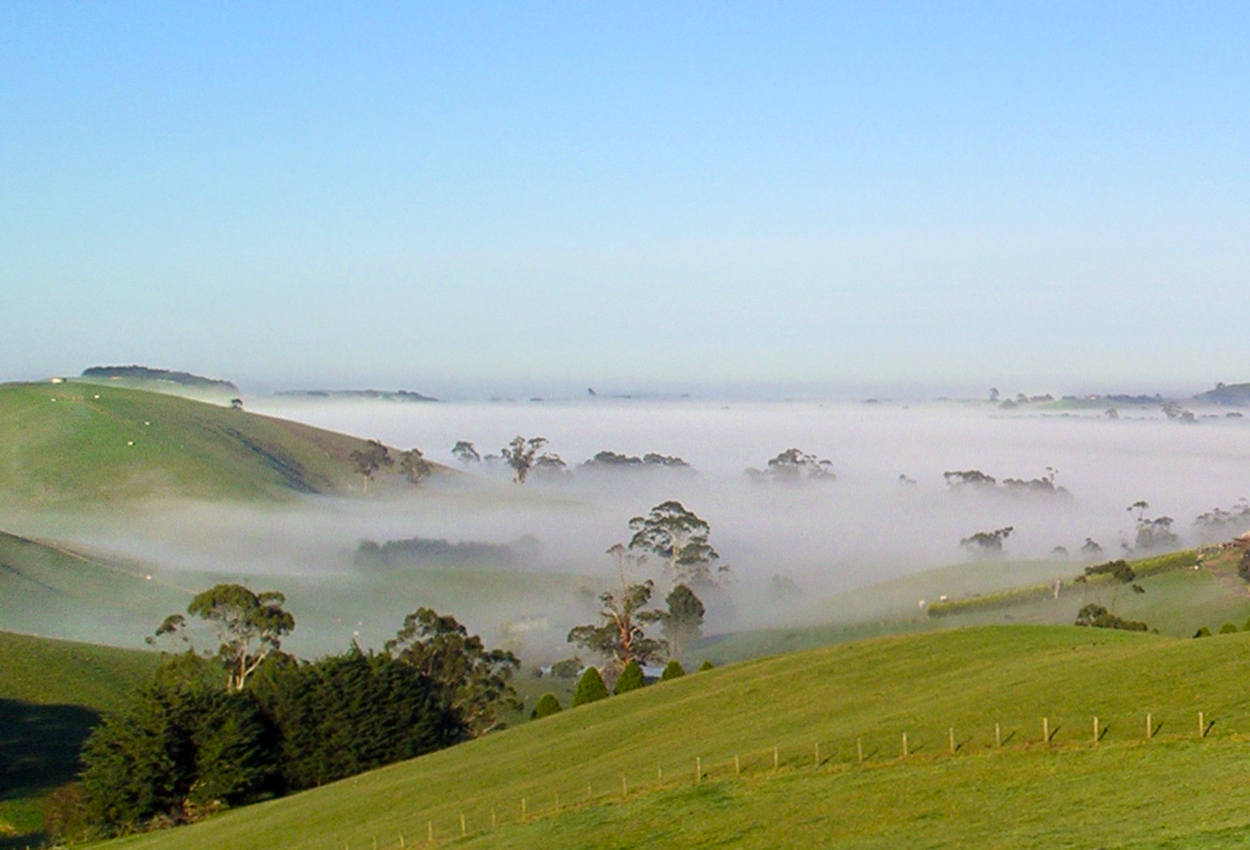 The constant calling of Korumburra.

Start along the road to Korumburra, the hills turn a shade of green you’ll see nowhere else in Victoria...

When you slow down and turn off the highway, start along the road to Korumburra, the hills turn a shade of green you’ll see nowhere else in Victoria. It’s storybook green. It’s the green you find in a child’s paint set; startling and vibrant, intended as the colour’s archetype. —

For a long time, I thought I’d imagined how green the hills were. But visiting recently I realised I hadn’t pictured them as green enough. I left Korumburra in 1978 when I was in the middle of Grade Three. The hills and their colour stayed with me, even though our new house in Terang looked out on a dry lake – an expanse that was usually covered in grass, yet it never achieved the mythical green of the Korumburra hills. Once, as I stood beside one of the six large windows in a Melbourne CBD office I was employed by in the early noughties, the members of the small team being out on various missions, I took a second to appreciate the scene. My view was the building adjacent, softened only by a hint of cloud at the skyscraper’s peak. I burst spontaneously into tears. I had no idea then what I was crying about. But when I drove towards Korumburra recently, as I was gazing at the undulations and trees, it was obvious. I hadn’t been able to breathe. And breathing’s still hard where I live now in Yarraville. One strip of houses separates us from Geelong Road’s six lanes. Not too far distant are the notorious trucks of Francis Street, and the Westgate Freeway hums a couple of punt kicks further away. Above us, when the conditions are right (or wrong), most planes on their way to Melbourne Airport cruise over our house. The elderly neighbour’s weatherboard doesn’t look like it’s been washed down in decades, though you can still see some cream paint behind the thick layers of diesel dust. Occasionally my wife or I run fingers through the thin layer of dust accumulating on our white-painted boards and say, “That stuff’s killing us.” Her friend said when she visited, “Don’t worry, it’s killing us all. The bus pours diesel fumes into our front yard every quarter of an hour.” The air’s so clean in Korumburra it cuts my lungs. And I love it. I want to run around in it the way kids do under sprinklers on hot days. And so I do. I get outside at the B&B where we’re staying and kick the footy for ages with my eight-year-old son. The lawn is lush. We tangle and bump and fall over and laugh. Then we huff and pant because of the exertion, then back inside for dinner to refuel. Of course, I want to live in the country; this much is obvious to my wife and to most people who know me. I lived in country towns, including Korumburra, up until the age of twelve when my bank manager dad landed in Geelong. Six years later, I found myself in Melbourne and, except for one year in the early ‘90s, I’ve been in the city ever since. I always thought I’d escape, but I haven’t. And when I’ve thought about getting out, I’ve always thought of Korumburra or, at least, Gippsland. When you’ve got six hometowns, it’s hard to pick one. I spent the most time in Geelong and, yes, it has a hold on me; the slower pace of the surf coast. But Korumburra’s emerald green hills are my spiritual home. It’s where a girl first kissed my lips and where I cried in the schoolyard when Gough Whitlam was dismissed as Prime Minister. On its streets, I pretended to chase UFOs around on my bike at night and, at our house in Scott Court, I hid behind curtains with my family in the lounge during an eclipse of the sun. Korumburra’s where I failed to learn to swim, where I became a cub and bowled three kids out one night; it’s the town in which I first heard Split Enz. I went to Bena’s Under 16 footy training as a petrified eight-year-old, and I was coached to play tennis on the en-tout-cas courts, so well that I was a confident nine-year-old in that Under 16 team. The town fills my fiction, especially my recent novel-in-stories, We. Are. Family. Many of the stories are set there and in other areas of a fictionalised Gippsland. I thought writing them would perhaps see the town and Gippsland’s hold on me diminish. But having recently written a new story about a larrikin youth set in a place called ‘The Burra’, and I can, instead, see many more emerging. Places get into your soul and they stay. Gippsland and Korumburra are set to stay with me my entire life. I should perhaps have known that when our family car pulled from the motel on the last night we spent in Korumburra. We never got to stay in our house on the last night before we were wrenched from our towns. I felt a deep emptiness as I looked over the motel’s red sign toward the star-filled sky. At that moment, a hit song of the period came on the radio: Rod Stewart’s “I Don’t Want to Talk About It”. Rod crooned, “I can tell by your eyes that you’ve probably been crying forever/and the stars in the sky don’t mean nothing to you, they’re a mirror.” We don’t often associate kids and the idea of broken hearts, but as Rod continued to sing his lyrics on the topic, I think that’s what happened to me. Aboriginal people have long valued how deeply humans can be connected to place. They’ve told that place can be so deeply ingrained in us that we become part of it. I do not walk the green hills and valleys of Korumburra today, but they shift in and through me, every day. — Paul’s acclaimed debut novel, We.Are.Family. (released through MidnightSun Publishing) is available through your favourite bookstore. You can read our piece on Paul from issue four here.