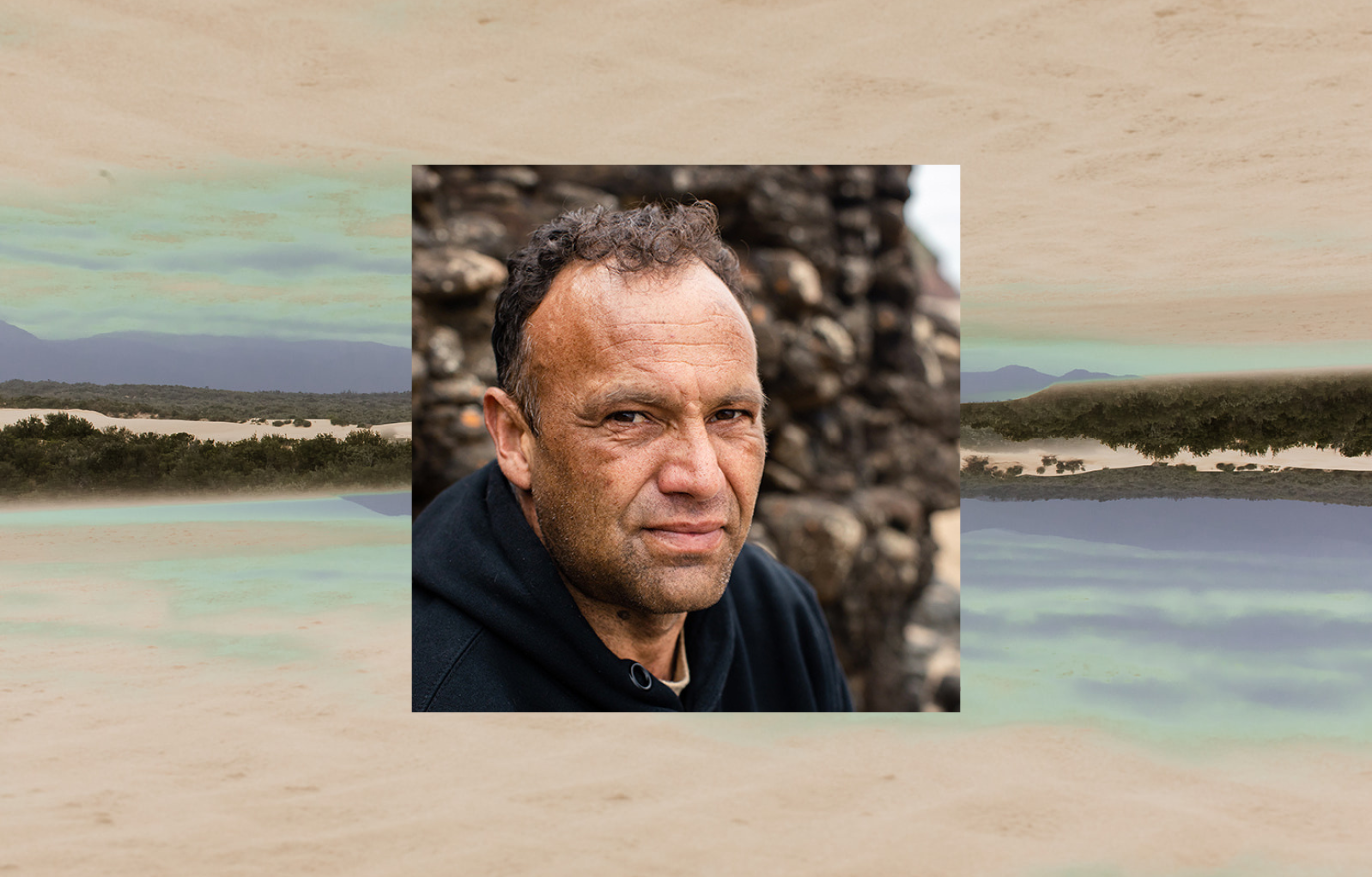 Millowl's Steve Ulula Parker on the importance of being a mentor, creating art and what fills him with pride.

My introduction to Steve Ulula Parker still makes me chuckle today, and he has probably long forgotten it.

In the early days of Gippslandia, three or four years ago now, I was presenting our newspaper’s ‘origin story’ (it features much less kryptonite than Superman) at a Regional Arts Victoria (RAV) event.

To provide a little background on myself, I’d included a picture of a cover of a bodyboarding magazine that I worked for in my 20s. It was a cool shot: a rider deep inside a rather large, yet sparkly, wave in Indonesia. On closer inspection, you’d spot a massive tree stuck in the wave that’s narrowly missing the rider.

It’s one of my favourite photos, so I’ve shown it to quite a few people.

As it flashed up on the screen that summery afternoon in Meeniyan, a sharp inhalation gave Steve away. I only just caught it, but I instantly knew that he ‘got it’. He surfs.

It was only later in the day, after he’d demonstrated some of his musical talents, artistic prowess and supported a younger First Nations artist in presenting their work to the audience, that I learned that this was Steve Parker, Steve Parker – a much-respected name in Surfing Victoria, a mentor to many and someone that shreds Millowl’s (Phillip Island) cracking waves.

It’s a privilege to present more of Steve’s story to you now.

“As soon as I got on that first wave, there was no turning back, and ever since then I've tried to get to the beach every chance I have”

Steve began surfing as a 12- or 13-year-old, when his ‘old boy’ took him and some mates to Point Leo, which is where his Dad had surfed many years before.

“As soon as I got on that first wave, there was no turning back, and ever since then I’ve tried to get to the beach every chance I have,” says Steve.

Steve remembers paddling out at Woolamai, one of Millowl’s and Victoria’s premier waves.

“The first time was pretty intimidating; not knowing the rips there and [not] understanding how to use them to your advantage. Now, it’s just natural to me”.

As a Boonwurrung, Yorta Yorta, Erub man, Steve has said, “I feel like I’m connected to the water… My people are from the Torres Strait Islands and the Yorta Yorta are river people. I’m also part of the Birrarung and all of these have water elements to their lives.”

It’s utterly fitting that Steve has two installations at Woolamai, the first beach you check for waves on Millowl and a National Surfing Reserve. The Wominjeka sign welcomes you into Woolamai and has animals that are significant to Boonwurrung Biik and Millowl: betayle (whales), bunjils (wedge-tail eagles), byidens (shearwaters) and burrunan (dolphins). The striking surfboard-shaped artwork represents the spiritual significance of the Warreenu (ocean) around the Cape, pinnacles and Pyramid Rock, and the tidal movements between the Cape and San Remo. Both pieces are made from Corten steel.

Born in Naarm (Melbourne) in 1977, Steve was adopted as a six-month-old by his parents Alison and John. Meeting his biological mother when he was 11, Steve says his “identity was always strong” from his parents, and as he grew up, “they always made sure I knew who I was and who I am”.

At the end of year 11, Steve took off to Queensland and did the first three years of his building apprenticeship before coming back to Victoria and finishing it off with Gippsland Group Training.

Once he finished, he headed for a four-week surf trip in Western Australia. He stayed 12 months, seizing an opportunity to work on Christmas Island for a month before returning to Victoria, which was ‘super rad’.

Back here, Steve was still surfing whenever he had time off and Rory Thomas, “a deadly- as mate from Sandy Point”, got Steve into surf coaching.

“When I did my coaching course, I [got to know] some other deadly brothaboys – Anthony Hume, Rangi Pito – and we had yarns with Max Wells from Surfing Victoria.

“He said that he had some opportunities for all of us to work on some Indigenous programs. So we all decided that we could help as coaches, and that’s when it all started rolling from there.

“Our programs started getting quite popular within the community, and the number of participants were majorly increasing over time. Our programs ran second-best (in numbers to AFL programs within Indigenous communities).”

Steve says that it was a blessing to be running these programs with ‘our mob’, as it took him back to his family and forged connections through the community.

“We could see the positives that our community were getting from the surf programs. From fitness, a healthy lifestyle, mentoring, leadership, coaching qualifications – and the challenges surfing gives the participants has provided tools for the challenges in life too.”

At 26, Steve was the chairman of the Victorian Indigenous Surfing Association, an organisation he founded with the help of Anthony.

In 2012, while still guiding the strongest Indigenous surfing program in the country, Steve organised the running of the Australian Indigenous Surfing Titles at Bells Beach.

“It was something I dreamt of while I was the site manager at the Rip Curl Pro at Bells for a few years. I wanted to see our best country's Indigenous surfers battle it out at Bells.

“I used a lot of the Aussie pros from Bells to get messages to our mob on the Gold Coast and in other states. It [involved] a lot of phone calls connecting to our ocean mob. Chasing a lot of old names and Indigenous surfers that I looked up to.”

After being asleep for 16 years, the event roared back to life. It was very well received and generated a lot of interest, which was a great result for Steve and the surfers as they celebrated the combination of their cultural heritage and surfing culture. Steve said, “It was such an important event and something that will provide a great platform for us to move forward [from] in the future.”

From this period, to when Steve left his role as Surfing Victoria's Indigenous Aquatics Officer a couple of years ago, to even now, if you research ‘Steve Parker’ you’ll find numerous conversations, articles or quotes relating to Steve’s mentorship ability or how many talented youngsters have thrived after being taken under Steve’s wing.

I could see it at the brief RAV event, and when I raise this with Steve, he replies, “I'm pretty stoked that you have said that, and I have impacted a few. I think [becoming a good mentor] is just about life experiences, living life to the fullest and believing in yourself and others.”

Since his time at Surfing Victoria, Steve has started working in cultural education more, landing a role at the Royal Botanical Gardens in Cranbourne. He’s also worked as an Aboriginal Support Worker at Wungarla Ngarloo Aboriginal Healing Centre in Yarram for Aboriginal men moving back into the community.

Steve shares that the pandemic has brought some challenges to these positions, but he’s navigating through this time.

Steve has been devoting more time to Millowl Dreaming; a platform founded to provide consultation, cultural walking tours and education programs, as well as explore their many music, dance and art projects.

Before concluding our conversations, I ask Steve, “Look back over your life to this point, what are you most proud of ?”

He replies, “Giving the kids I mentored the tools, power and confidence to go out and build their journeys in what they want to do.