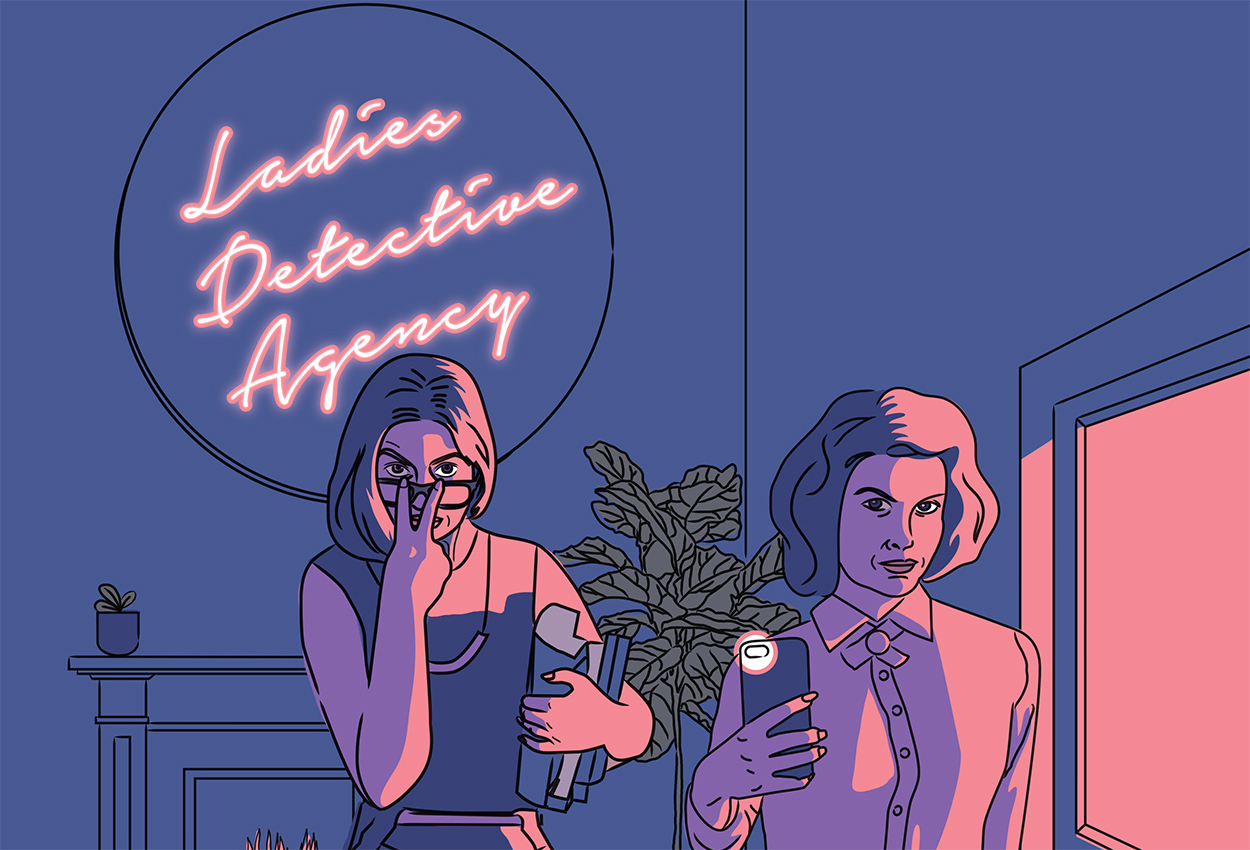 An introduction to the Bairnsdale Ladies’ Detective Agency - a pair of unrelenting, yet charming private investigators.

“Women are the ones who know what's going on,” she said quietly. “They are the ones with eyes. Have you not heard of Agatha Christie?” —Mma Precious Ramotswe, The No. 1 Ladies' Detective Agency.

What makes someone become a private investigator in their 60s? Robyn and Sally don’t fit the stereotype. They’re not burnt out ex-cops with hip flasks and bad manners. Their manners are impeccable: the finishing school variety. These PIs are ex-actresses, who hold themselves like they’re about to step onto the stage. They’re charming and elegantly dressed in floral dresses and pearls. —

“Please take a seat”, Robyn says politely, waving calmly at the comfy armchairs. Illustrator Georgia Miles and I sit down. It’s like being cast in a classic BBC series. You know the ones shown on the ABC on Sunday night. The mise-en-scène is Miss Marple chic. There’s a Persian rug on the floor and tastefully placed indoor plants. A painting on the wall is so large that viewing it is almost like looking out a window. I gaze at the framed abstract rolling hills, they’re away from everything; where life’s safe... and good. The office of the Bairnsdale Ladies’ Detective Agency is neat as a pin, yet it betrays the mysterious whiff of far-off places. Robyn and Sally sit and watch us. They’re used to listening and observing, not talking. Finally, Sally speaks, “Often people come to us who are imagining something is happening or have this feeling something is happening. A lot of being a detective is psychoanalysis. We listen with empathy, don’t make judgements and do our investigation to prove [if something is happening] one way or another. Either way, it’s a relief for our clients to find out the truth”. Robyn and Sally talk quietly and directly. “People come to us when they have nowhere else to go with their story”, Robyn says. Sally continues, “Our clients are often too afraid to tell their friends or families because they think they’ll sound crazy. Often they’ve been turned away by the police because they have no evidence. It’s listening to women and saying,‘Yes, what you’re saying — it’s okay to say it’. It’s validation that women have real concerns about their physical and mental safety and often there’s nowhere to take it. Doctors won’t listen to ‘I think I’m being stalked’. Police need more than a notion. So, who do you go to? You come to us”. The detectives start telling the story of one of their clients: a woman who wanted to prove to her daughters that her husband was tracking her every move. She came to Robyn and Sally saying, “My own children don’t believe me. They’re grown women and they say, ‘Dad’s fantastic, Mum. That’s not true he’s following you’”. This case was closed half-way through. The woman was too scared of her husband to continue. What if he found out? What would he do then? “It’s very hard”, says Sally, “walking away and letting go of some cases”. “I understand, totally, what it is to be oppressed and frightened”, says Sally. For a second her eyes flash with tears. “My second husband threatened me with a gun: a rifle. Once, when he was physically hurting me, I thought, I’m going to die now. This is it. He’s going to break my neck. So I really understand the women who come to us... their fear”. The Bairnsdale Ladies’ Detective Agency cover a wide range of cases, from finding missing persons (“Yes, we’ve found a few”, says Robyn) to forensic accountancy. The most common cases are gathering evidence of stalkers or jealous partners, and lovers keeping women under surveillance. “Often people are very frightened by the fact they think they’re being followed or watched”, says Sally. “Often, they really are [being followed or watched]”. They’re like two elegant foxes, Robyn and Sally, cunning exchanges of glances and unspoken calculations. As true ‘ladies’, these detectives wear shining pearl earrings (though they’re far from being as bright as their eyes) and their fitted floral dresses lightly brush their ankles. The softness of their classic attire disguises their strength. There’s a hard edge to Robyn and Sally too. A toughness. The way they watch Georgia and me, it’s unrelenting, and I wonder what they already know about us just from observing. They tell us stories of finding cars bugged with GPS trackers, going through rubbish, and checking for tiny patches of sawdust in homes where cameras have been screwed in. Robyn and Sally chuckle when they talk about pretending to be walking the dog to watch suspects. “A scarf is a lady detective’s best friend”, says Robyn, “You throw a scarf over your head or shoulders and you’re a different person. Once you turn a certain age, and as a female, you’re invisible anyway”. “You slouch a bit or walk differently”, says Sally, “...and phones these days; their presence really makes it easier for us. You might stand and look like you’re looking at your phone but you’re taking a photo or a recording”. Robyn and Sally are accountants in the hours that they’re not secret sleuths. “It’s a good cover for people who come for our detective services, they can say they needed to do their tax”, says Robyn. It’s their role as accountants that led to them becoming private eyes. “We often stumbled upon money that wasn’t supposed to be there and this led to us deciding to be investigators”, says Sally. “We’ve often traced money”, says Robyn, “[there were] people worried about dodgy investments or spouses sending money to overseas lovers”. In a back room, I glimpse a row of tall powder-pink filing cabinets. They stand prim and proper — elegant. Morning light sneaks in through Venetian blinds. The filing cabinets glow beautifully. Two of the drawers are open and I can see the jumbled mess of files inside, the nefarious secrets and mysteries of complex relationships and lives. There’s a lot Robyn and Sally aren’t saying. They almost start stories, then stop. They begin telling a tale about tracking money to a suspect’s lover then halt mid-sentence, mumbling something about the police. They go to answer questions, then pause and gaze into the distance for a while. Robyn and Sally are good at keeping a secret. Unspoken and unsolved mysteries undulate between them.