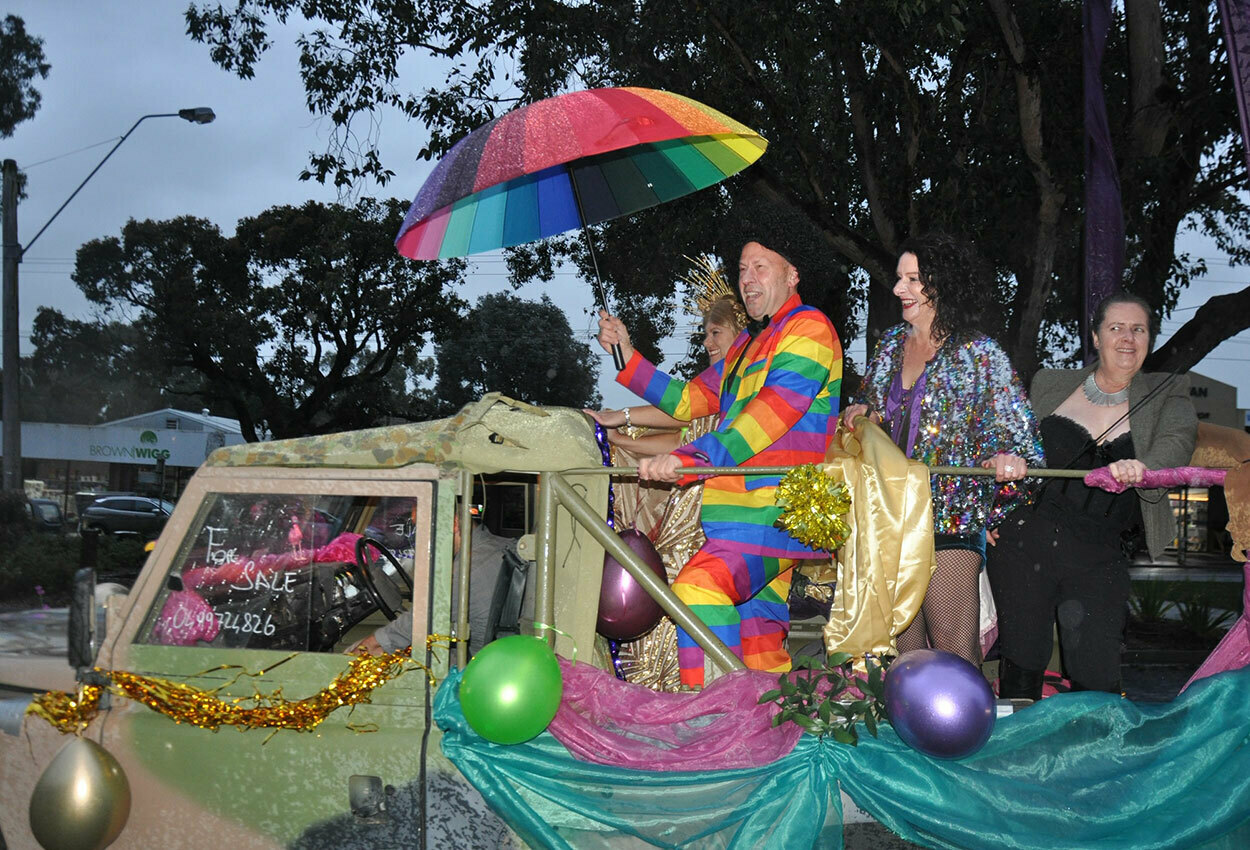 What started out as a brilliantly themed 30th in 1998, turned into a celebration of diversity for the Meeniyan community.

On a cold, rainy November day in South Gippsland, you could be forgiven for thinking that the best way to spend the coming evening would be curled up in the warmth of one’s home rather than heading out. Driving into the small town of Meeniyan, however, the sight of dozens of bright, boldly dressed people standing outside the town hall confirms that you made the right choice.
—

As the rain begins to come down hard once more, the anticipation in the crowd grows. Then, suddenly, a cheer erupts upon seeing a camo-painted vehicle that’s as flamboyantly decorated as the waiting throng. Riding in the tray of the vehicle, multiple individuals smile and wave at the crowd as they approach. One of these individuals is Marty Thomas, a local business owner and proud community member. It is his arrival that marks the official beginning of the First Annual Meeniyan Marty Gras.

Though this is the first official year of Marty Gras, the event actually traces its origins way back to 1998. This is when close friends Kym and Marty decided to celebrate their 30th birthday together, two hours away from the rolling hills of South Gippsland in the suburb of South Melbourne, with a party they dubbed ‘Kym & Marty Gras’.

Exactly 20 years later, in 2018, ‘Kim & Marty Gras’ was revived when the friends, now celebrating their 50th birthday, decided to have a second themed event in Meeniyan.

“So much fun was had last year, that we were asked to make it a yearly event!”, Marty happily explains, reflecting on last year’s birthday celebration.

And so it came to pass that on November 9, 2019, with the glorious arrival of Marty, the revellers filed into Meeniyan Town Hall to begin celebrations once more. Some were dressed for a night on the town, others in costume. Even a young Freddie Mercury was in attendance! It was clear that everyone who had turned up to the event was ready for another epic night of revelry. Once in the hall, cheers erupted again as the music was cranked up and the festivities began in earnest.

Marty Gras is more than just another big party, it’s an outlet to celebrate the diversity of the community. Hence, it was decided that the event would dedicate itself to raising money for charity. In the end, two charities were chosen to benefit:
South Coast Inclusion Network (SCIN) was chosen as the local recipient. This group helps advocate for the LGBTIQ community in the Bass Coast, South Gippsland and Baw Baw Shires. They offer inclusivity workshops and guest speaker opportunities, as well as information and support for LGBTIQ individuals and families. The money raised will go towards putting on an SCIN ‘inclusion film’ community screening.

Opportunities of Development thru Art (ODA) were chosen as the international recipient. As a cause close to Marty’s heart, this charity runs eight schools in the villages surrounding Siem Reap, Cambodia. Marty himself often does local fundraising for the group, and volunteers at least every two years or so in one of the schools. Their donation will go towards funding wages for the teachers of School Six.

The motivation of giving to those who need it most is on clear display throughout the event, from pamphlets at the entrances promoting the work of both charities, to posters on the walls.

Following opening speeches, drag queen Krystal Ring appears on stage to entertain the crowd. Strutting, as only Krystal can, she launches into a performance with her unique blend of humour, dance and song. After highlighting the charities once more, the night’s fun kicks on.

On top of the entry fee guests have paid, a raffle and silent auction are held to raise additional funds. Impressively, and perhaps a testament to the passion of the wider Meeniyan community, every local business donated a prize for the event.

The way that businesses across the community supported the event was a proud moment for Marty:

“This is an amazing town. It grabs every opportunity to do good and have fun, and I so want to thank our sponsors and local volunteers who helped us make such a great event.”

By the end of the evening, over $6,000 had been raised to be split evenly between SCIN and ODA. Adding to the night’s generous spirit, the Red Cross catered the event and themselves raised an additional $2,000.

“An event like Marty Gras showcases the diverse rural community in which we live”, enthuses Marty. “We can all join together for a night, forget about our differences and have great, no-judgement fun!”

Marty hopes that the event will become an annual staple in Meeniyan, helping to spread joy and inclusion, and support those from all walks of life for years to come.