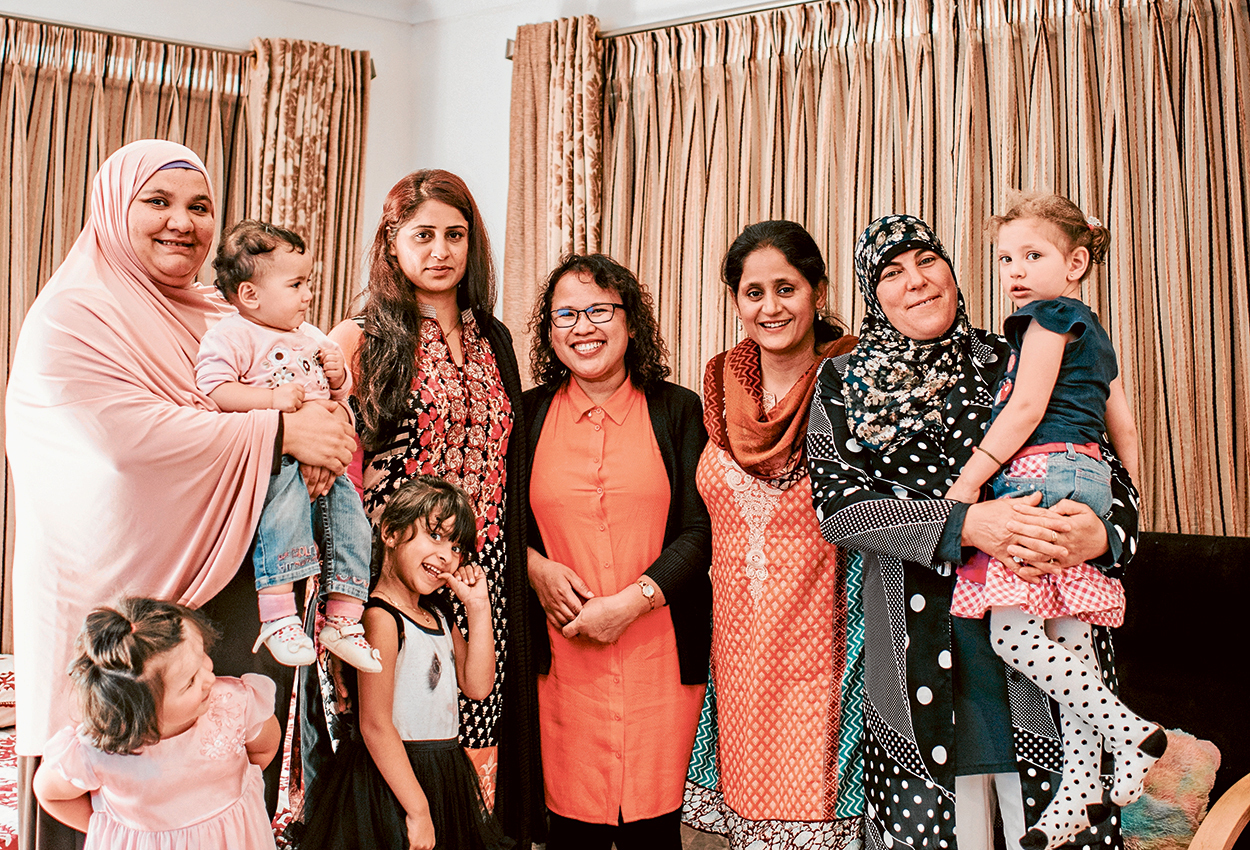 Everybody has been on a journey - a story to share. The Living Libraries project brings these stories to life.

Everybody has been on a journey. We all have a story to share. Now, imagine that you could share your story with people who are eager to listen and learn about your life. That is what Living Libraries do – they bring people and their stories to life!

In 2014 and 2015, the United Muslim Sisters of the Latrobe Valley (UMSLV) Committee Members, as well ladies from other organisations, organised a Living Library event called Understanding Journeys. The occasion provided a safe environment for women from various cultural backgrounds to share stories of their journeys. Many of the stories involved themes around migration to Australia, and they were as diverse as; a Maltese family migrating to our shores on a ship over 60 years ago to a journalist's more recent arrival. Some stories were around faith, the formation of identities and another was about reconnecting with family after being separated during the era of the Stolen Generation. The stories were very powerful and the common theme of humanity came through in them all.

One of the participants commented on how much she enjoyed the evening. It gave her opportunity to realise, in that library was a group which featured such amazing diversity, and yet at the end of the day, we are all the same. A young girl from the Muslim community attended an event with her mother and asked if we could please arrange a similar event so that the youth could present their stories on their families’ migration. Therefore, from the two Understanding Journeys proceedings, and the young girl’s request, we had our inspiration to arrange Living Library sessions for the youth. The secondary school environment was identified as the ideal environment to conduct a youth Living Library project. School is a place where all young people have the right to feel safe and feel a sense of belonging regardless of their gender, ethnicity, ability or sexuality.

Whether through mainstream or social media, young people are bombarded with oftentimes discriminatory imagery and narratives relating to culture. Young people don’t necessarily have the resources to be critical of this negative stereotyping and are vulnerable to influences both from the media and exposure to ill-informed views of family and friends. This is the perfect storm for young people to adopt their own discriminatory attitudes and behaviours that can play out in the classroom.

Our aim was to create a space where students could learn about their peers and understand them on a level that may not have been explored utilising the usual channels. Furthermore, we wanted to develop participating students as cultural ambassadors to help them take the message of respect and understanding into their social circles. We wanted to think of an innovative way of creating empathy and an improved sense of belonging in young people who may feel different and isolated.

During a Living Library session, you can have between three and five storytelling sessions (or more, time-dependent). In each session, a person (‘book’) tells their story to a group of listeners (‘readers’). At each session, readers have the opportunity to listen to a different book.

Living Library sessions can have different formats depending on whether it’s aimed at adults or youth groups. The UMSLV and the Centre for Multicultural Youth (CMY) have partnered to take this concept of Living Libraries to schools. We call it [MY] Story, which stands for Multicultural Youth Story. Delivering a project to a young audience draws on many areas of skill and expertise. To evaluate the efficacy of our project, we’ve developed ways of measuring outcomes. To clearly explain the project to the teaching staff we’ve collated a manual. To excite students, and remind them of the event, we’ve designed information flyers. From facilitating sessions to data analysis, graphic design and printing, our organisations have been able to tap into human resources. Through the support and encouragement of Kindred Spirits, we’ve had the financial resources to develop this very exciting and innovative project. So I’d say our first success was securing the funding for this project.

Our second success came from partnering with CMY and Nanoo Nanoo Arts in the training of our first generation books and our trial project. Nanoo Nanoo Arts involvement with the delivery of the project at our first two schools, and in the making of our documentary on our trial project is invaluable, and you can view the video on YouTube. The Living Library sessions show that the five session program is one of the biggest successes. When the readers acknowledge what the books have gone through, and can relate and connect with their stories, the teachers are able to see the levels of empathy, which can otherwise be a difficult concept to teach.

Our goal is to deliver the project to schools across Gippsland with those students presenting to a grade 6 class. The fourth term in all schools is busy, so we aim to deliver three projects per year. If we have about 50 students involved in the project through the collaborative work of primary and high schools, we could potentially create close to 50 cultural ambassadors per term taking the message of respect and understanding to their social circles with an impact of at least tenfold.

The process of moving to a new country is a huge step in one’s life. There are multiple factors involved for people to embark on this journey, and for choosing the area to live in. Usually, the place of residence is chosen because of job factors and people also pick the place to live in its proximity to find amenities easily. When people move there are different emotional stages they go through. As research suggests, this starts with the ‘loss’ of leaving your homeland and family, ‘joy and relief’ of successfully moving to a new place, 'transition' involves acceptance, adjustments and reorganisation. At this stage, people struggle with ‘identity crisis’.

The majority of people don’t want to come out of their comfort zone; they tend to isolate themselves in fear of losing their identity. This is where multicultural groups help them to integrate with broader communities.

Gippsland is a beautiful and scenic part of Australia, and the majority of the people are very welcoming and cooperative. As of 2016 census, Gippsland was home to 271,266 people. Of that, there were 70,706 people with at least one parent born overseas; representing 26% of the population and 53,093 residents were born outside of Australia.

Multicultural Gippsland has manifold benefits. It enriches the prevailing cultures and traditions; simultaneously it welcomes new ideas, opinions, festivals and, most importantly, new cuisine in the region. The projection of multicultural Gippsland should be where children, youth, women and men can integrate, where people can practice their faith and beliefs and celebrate their festivals freely.

Projects such as [MY] STORY, Understanding Journeys, Understanding Scarves and other social cohesion projects give the immigrants and local people the platform to talk and break barriers and maintain their culture and identity simultaneously. This is a healthy way of integrating and assimilating in their new homeland. Eventually, it enables a tolerant and respectful society. Showcasing positive stories of Gippsland and multiculturalism will exhibit a better image of the region.

An initiative of CMY and UMSLV the [MY] Story project was activated with Mrs Mustoe’s year seven English class during the course of this last term. Through a five session package, students had the opportunity to participate in developing their own narratives or personal stories, thus becoming living books. Incorporating independent presentation styles in a creative way they then became tellers of their own story to a small group of their peers in the same class. Five students then volunteered to tell their personal story to the grade six students at St Michael’s Primary School.

The interaction between the grade six student ‘listeners’ and the year seven ‘storytellers’ was extraordinary. The small group audiences scattered around the grade six rooms were extraordinarily powerful mechanisms for both tellers and listeners.

Whilst we were immensely proud of the storytellers, it was the reaction of the listeners that caused us the most excitement. The personal stories of the year seven students were met with bursts of interest from the grade six students. They listened with avid attention and respect whilst the stories were being told and then asked the most searching questions. When asked what they had liked or learned they were able to give astute and clear feedback. Some made the leap into their own lives and expressed openly to their peers how their personal stories matched those of the storytellers. We heard grade six students recalling the hurt of similar broken relationships, hardship at changing schools, familial and sibling difficulties as well as their own engagement in sporting teams and what makes them happy.

Making these connections with the story of other human beings has been one of the great aims of the [MY] Story project. The sense that all of us share common stresses, hardships and joys.

The image presented for this story comes from a Gippslandia #2 feature, Stick the melting pot on, where we were kindly invited into the homes of many multicultural groups in Gippsland to share a meal. The featuring was wonderfully shot by the talented Morgane Cazaubon of Petite Visuals.