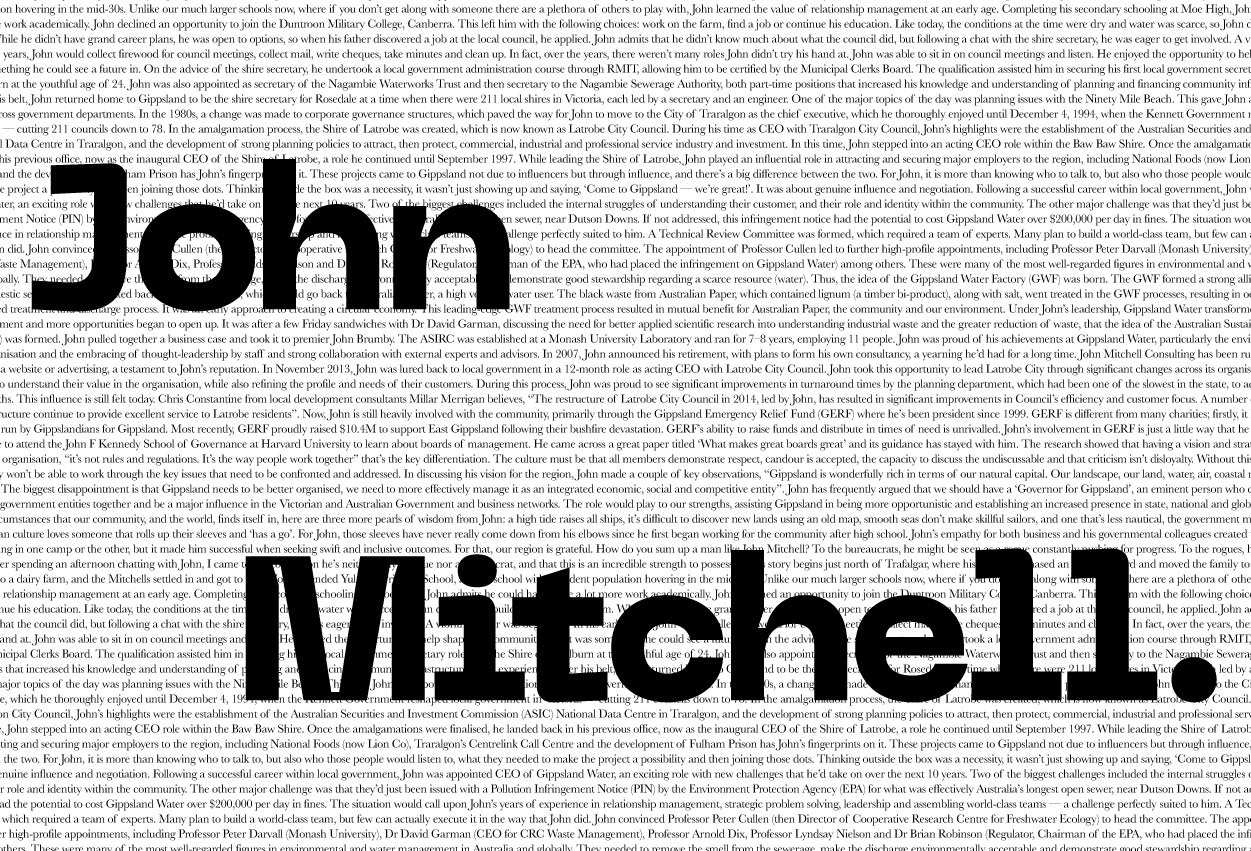 Australian culture loves someone that rolls up their sleeves and ‘has a go’. For John, those sleeves have never really come down.

How do you sum up a man like John Mitchell? To the bureaucrats, he might be seen as a rogue constantly pushing for progress. To the rogues, he may well be seen as a bureaucrat.

After spending an afternoon chatting with John, I came to the conclusion he’s neither fully a rogue nor a bureaucrat, and that this is an incredible strength to possess.

John’s story begins just north of Trafalgar, where his father purchased an apple orchard and moved the family to Gippsland. The orchard later grew into a dairy farm, and the Mitchells settled in and got to work.

John attended Yulunga Primary School, a small school with a student population hovering in the mid-30s. Unlike our much larger schools now, where if you don’t get along with someone there are a plethora of others to play with, John learned the value of relationship management at an early age.

Completing his secondary schooling at Moe High, John admits he could have done a lot more work academically. John declined an opportunity to join the Duntroon Military College, Canberra. This left him with the following choices: work on the farm, find a job or continue his education. Like today, the conditions at the time were dry and water was scarce, so John didn’t fancy building a life on the farm. While he didn’t have grand career plans, he was open to options, so when his father discovered a job at the local council, he applied.

John admits that he didn’t know much about what the council did, but following a chat with the shire secretary, he was eager to get involved. A vibrant career was beginning.

In his early years, John would collect firewood for council meetings, collect mail, write cheques, take minutes and clean up. In fact, over the years, there weren’t many roles John didn’t try his hand at.

John was able to sit in on council meetings and listen. He enjoyed the opportunity to help shape the community, and it was something he could see a future in. On the advice of the shire secretary, he undertook a local government administration course through RMIT, allowing him to be certified by the Municipal Clerks Board. The qualification assisted him in securing his first local government secretary role with the Shire of Goulburn at the youthful age of 24. John was also appointed as secretary of the Nagambie Waterworks Trust and then secretary to the Nagambie Sewerage Authority, both part-time positions that increased his knowledge and understanding of planning and financing community infrastructure.

With experience under his belt, John returned home to Gippsland to be the shire secretary for Rosedale at a time when there were 211 local shires in Victoria, each led by a secretary and an engineer. One of the major topics of the day was planning issues with the Ninety Mile Beach. This gave John an opportunity to build relationships across government departments.

In the 1980s, a change was made to corporate governance structures, which paved the way for John to move to the City of Traralgon as the chief executive, which he thoroughly enjoyed until December 4, 1994, when the Kennett Government reshaped local government in Victoria — cutting 211 councils down to 78. In the amalgamation process, the Shire of Latrobe was created, which is now known as Latrobe City Council. During his time as CEO with Traralgon City Council, John’s highlights were the establishment of the Australian Securities and Investment Commission (ASIC) National Data Centre in Traralgon, and the development of strong planning policies to attract, then protect, commercial, industrial and professional service industry and investment.

In this time, John stepped into an acting CEO role within the Baw Baw Shire. Once the amalgamations were finalised, he landed back in his previous office, now as the inaugural CEO of the Shire of Latrobe, a role he continued until September 1997.

While leading the Shire of Latrobe, John played an influential role in attracting and securing major employers to the region, including National Foods (now Lion Co), Traralgon’s Centrelink Call Centre and the development of Fulham Prison has John’s fingerprints on it.

These projects came to Gippsland not due to influencers but through influence, and there’s a big difference between the two. For John, it is more than knowing who to talk to, but also who those people would listen to, what they needed to make the project a possibility and then joining those dots. Thinking outside the box was a necessity, it wasn’t just showing up and saying, ‘Come to Gippsland — we’re great!’. It was about genuine influence and negotiation.

Following a successful career within local government, John was appointed CEO of Gippsland Water, an exciting role with new challenges that he’d take on over the next 10 years. Two of the biggest challenges included the internal struggles of understanding their customer, and their role and identity within the community.

The other major challenge was that they’d just been issued with a Pollution Infringement Notice (PIN) by the Environment Protection Agency (EPA) for what was effectively Australia’s longest open sewer, near Dutson Downs. If not addressed, this infringement notice had the potential to cost Gippsland Water over $200,000 per day in fines. The situation would call upon John’s years of experience in relationship management, strategic problem solving, leadership and assembling world-class teams — a challenge perfectly suited to him.

A Technical Review Committee was formed, which required a team of experts. Many plan to build a world-class team, but few can actually execute it in the way that John did. John convinced Professor Peter Cullen (then Director of Cooperative Research Centre for Freshwater Ecology) to head the committee.

The appointment of Professor Cullen led to further high-profile appointments, including Professor Peter Darvall (Monash University), Dr David Garman (CEO for CRC Waste Management), Professor Arnold Dix, Professor Lyndsay Nielson and Dr Brian Robinson (Regulator, Chairman of the EPA, who had placed the infringement on Gippsland Water) among others. These were many of the most well-regarded figures in environmental and water management in Australia and globally.

They needed to remove the smell from the sewerage, make the discharge environmentally acceptable and demonstrate good stewardship regarding a scarce resource (water). Thus, the idea of the Gippsland Water Factory (GWF) was born. The GWF formed a strong alliance with Australian Paper, and the domestic sewage was rejuvenated back to Grade ‘A’ water, which would go back to Australian Paper, a high volume water user. The black waste from Australian Paper, which contained lignum (a timber bi-product), along with salt, went treated in the GWF processes, resulting in odour removal and a greatly enhanced treatment and discharge process. It was an early approach to creating a circular economy. This leading-edge GWF treatment process resulted in mutual benefit for Australian Paper, the community and our environment.

Under John’s leadership, Gippsland Water transformed its approach to wastewater management and more opportunities began to open up. It was after a few Friday sandwiches with Dr David Garman, discussing the need for better applied scientific research into understanding industrial waste and the greater reduction of waste, that the idea of the Australian Sustainable Industry Research Centre (ASIRC) was formed.

John pulled together a business case and took it to premier John Brumby. The ASIRC was established at a Monash University Laboratory and ran for 7–8 years, employing 11 people.

John was proud of his achievements at Gippsland Water, particularly the environmental outcomes achieved by the organisation and the embracing of thought-leadership by staff and strong collaboration with external experts and advisors.

In 2007, John announced his retirement, with plans to form his own consultancy, a yearning he’d had for a long time. John Mitchell Consulting has been running for more than 12 years without a website or advertising, a testament to John’s reputation.

In November 2013, John was lured back to local government in a 12-month role as acting CEO with Latrobe City Council. John took this opportunity to lead Latrobe City through significant changes across its organisational culture by assisting people to understand their value in the organisation, while also refining the profile and needs of their customers. During this process, John was proud to see significant improvements in turnaround times by the planning department, which had been one of the slowest in the state, to achieve outstanding results within 12 months.

This influence is still felt today. Chris Constantine from local development consultants Millar Merrigan believes, “The restructure of Latrobe City Council in 2014, led by John, has resulted in significant improvements in Council’s efficiency and customer focus. A number of key staff appointed during this restructure continue to provide excellent service to Latrobe residents”.

Now, John is still heavily involved with the community, primarily through the Gippsland Emergency Relief Fund (GERF) where he’s been president since 1999. GERF is different from many charities; firstly, it has Gippsland at its heart, as it’s a group run by Gippslandians for Gippsland. Most recently, GERF proudly raised $10.4M to support East Gippsland following their bushfire devastation. GERF’s ability to raise funds and distribute in times of need is unrivalled. John’s involvement in GERF is just a little way that he can give back.

John had the privilege to attend the John F Kennedy School of Governance at Harvard University to learn about boards of management. He came across a great paper titled ‘What makes great boards great’ and its guidance has stayed with him. The research showed that having a vision and strategy is important, but for Boards, and any organisation, “it’s not rules and regulations. It’s the way people work together” that’s the key differentiation. The culture must be that all members demonstrate respect, candour is accepted, the capacity to discuss the undiscussable and that criticism isn’t disloyalty. Without this approach, an organisation most probably won’t be able to work through the key issues that need to be confronted and addressed.

In discussing his vision for the region, John made a couple of key observations, “Gippsland is wonderfully rich in terms of our natural capital. Our landscape, our land, water, air, coastal regions... we’re beautifully located. The biggest disappointment is that Gippsland needs to be better organised, we need to more effectively manage it as an integrated economic, social and competitive entity”.

John has frequently argued that we should have a ‘Governor for Gippsland’, an eminent person who can act with authority and bring all local government entities together and be a major influence in the Victorian and Australian Government and business networks. The role would play to our strengths, assisting Gippsland in being more opportunistic and establishing an increased presence in state, national and global markets.

Given the extraordinary circumstances that our community, and the world, finds itself in, here are three more pearls of wisdom from John: a high tide raises all ships, it’s difficult to discover new lands using an old map, smooth seas don’t make skillful sailors, and one that’s less nautical, the government must run at the speed of business.

Australian culture loves someone that rolls up their sleeves and ‘has a go’. For John, those sleeves have never really come down from his elbows since he first began working for the community after high school. John’s empathy for both business and his governmental colleagues created the perspective of a rogue, never fully sitting in one camp or the other, but it made him successful when seeking swift and inclusive outcomes. For that, our region is grateful.