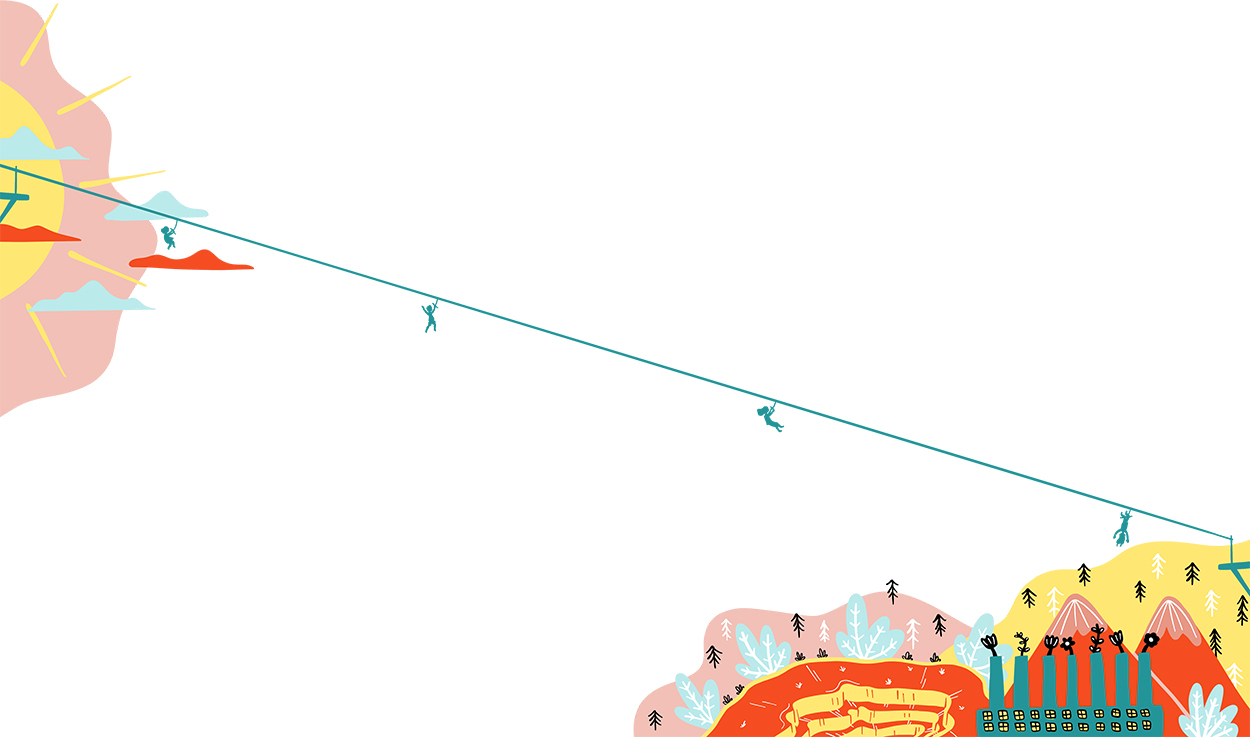 Can a zip line in rural Wales inspire rejuvenation in the Latrobe Valley?

When a large industry closes, the impact can be cataclysmic. Jobs disappear, families leave the area and wages drop. Towns can feel forgotten.

But the spark of an idea can change everything. —

An adrenaline-packed tourist attraction in my native North Wales is living proof that big thinking can change the fortunes of an area. Zip World is home to Velocity 2, the fastest zip line in the world, and the longest in Europe. By transforming a disused quarry in a deprived area of North Wales, the Zip World team have rejuvenated the area with local employment, a steady stream of thrillseekers and a business that’s continuing to grow.

Earlier this year I had the pleasure of watching my 70-year-young mother flying down the wire of Velocity 2. It was her birthday present, which she talked herself into after watching my husband zip down the wire unscathed the previous year. We took the entire family to watch because that’s the kind of paradoxical venue Zip World has created: a family-friendly, adrenaline junkie’s dream. The quarry is spectacular. From the minute you arrive your jaw drops in awe. Your ears tune in to the metallic ssshhhhh sound that fills the air as red-suited visitors fly down the zip line, and your eyes drink in the vast quarry with its sparkling turquoise water and backdrop of the vast Snowdonia mountain range. Welcome to Zip World.

And where is this spine-tinglingly good venue located?

In a small Welsh village called Bethesda in North West Wales, 160 kms east of Manchester (UK). Bethesda was built around the slate quarrying industry that dominated the economy of North West Wales in the 1900s. By the 1960s and 1970s the quarries had mostly closed leaving vast, empty craters cut into the ground. As a former Gippsland resident, I naturally drew parallels between the disappearance of such an important industry and the closure of Hazelwood in the Latrobe Valley. While the Latrobe Valley electricity industry employed a workforce of nearly 8,500 at its peak [1], the Welsh slate quarries once had a staggering 17,000 employees [2], producing half a million tons of slate to send worldwide. While living in Australia, I knew of people who lost their jobs at Hazelwood; I worked there myself for a few weeks and saw the scale of the site with my own eyes. Following the closure, I heard the talk of towns dying and I wondered whether Bethesda’s residents had had the same conversations decades earlier.

It was the majestic landscape of the largest quarry, Penrhyn Quarry, that caught ex-Royal Marine commando Sean Taylor’s eye. It was on a day out to watch a local rugby game that the entrepreneur glanced up at the Penrhyn quarry site and commented to his friends what a great venue it would be for a zip line. Motivated by a few beers, they wholeheartedly agreed, and so Sean went to talk to the owners of the quarry to propose his idea. They laughed at his suggestion but Sean persevered and in 2013, with the support of his two business partners, Zip World opened.

The idea was to build something unique: the fastest zip line in the world with speeds of over 160 km. It was a bold idea, and one of which the founders surely asked, excuse the pun, ‘will it take off’? But it didn’t just take off, it flew. Since opening, Zip World has opened two further sites attracting one million visitors [3]. And they don’t just come for the day; over 83% of visitors stay in the area overnight and most say they’ll return within the year, and with an average spend of between £250–500 per visitor, the more the merrier. The attraction of Zip World is perhaps most clearly shown in the time people are willing to travel. Most visitors travel two hours and 45 minutes each way to get their adrenaline rush, the equivalent of travelling from Morwell to Geelong.

While the statistics alone look great, it’s Zip World’s passion for the local area that defines them. The three Zip World sites employ 93% of their team from the local area and offer a wage that is substantially higher than the national average, a welcome boon for any town in rural Wales. In addition, Zip World locally source maintenance, catering, building work and materials for the attractions. And luckily for North Wales, the company continues to grow. From an initial team of nine people, Zip World now employs over 450 people and looks set to expand further. The results of this have been outstanding; a 2016 Economic Impact Assessment was undertaken by North Wales Tourism estimated that Zip World has contributed over £251,000,000 ($451,600,000 AUD) to the North Wales economy.

It was this overwhelming success that led to the opening of two further sites in North Wales. The Fforest

adventures (the double ‘f’ is a Welsh letter) offers an alpine coaster through the woods, treetop nets and

Europe’s highest giant swing. I recently experienced the Fforest Coaster with my family and you couldn’t wipe the grin off our faces. A must-do if you’re ever in Wales (I recommend coming in summer!). The final site is the Cavern adventures in Blaenau Ffestiniog, including the world’s only subterranean trampoline playground, Bounce Below.

While I don’t believe one company can, or should, be responsible for improving the socio-economic success of an area, there is little doubt the financial and emotional impact of one man’s vision has lifted a deprived area of North Wales. Each Zip World idea seems huge, insane almost. But maybe that’s the secret. People crave unique adventures and if a site is for the taking, why not dream big? From what I’ve seen, if you build it, they will come.