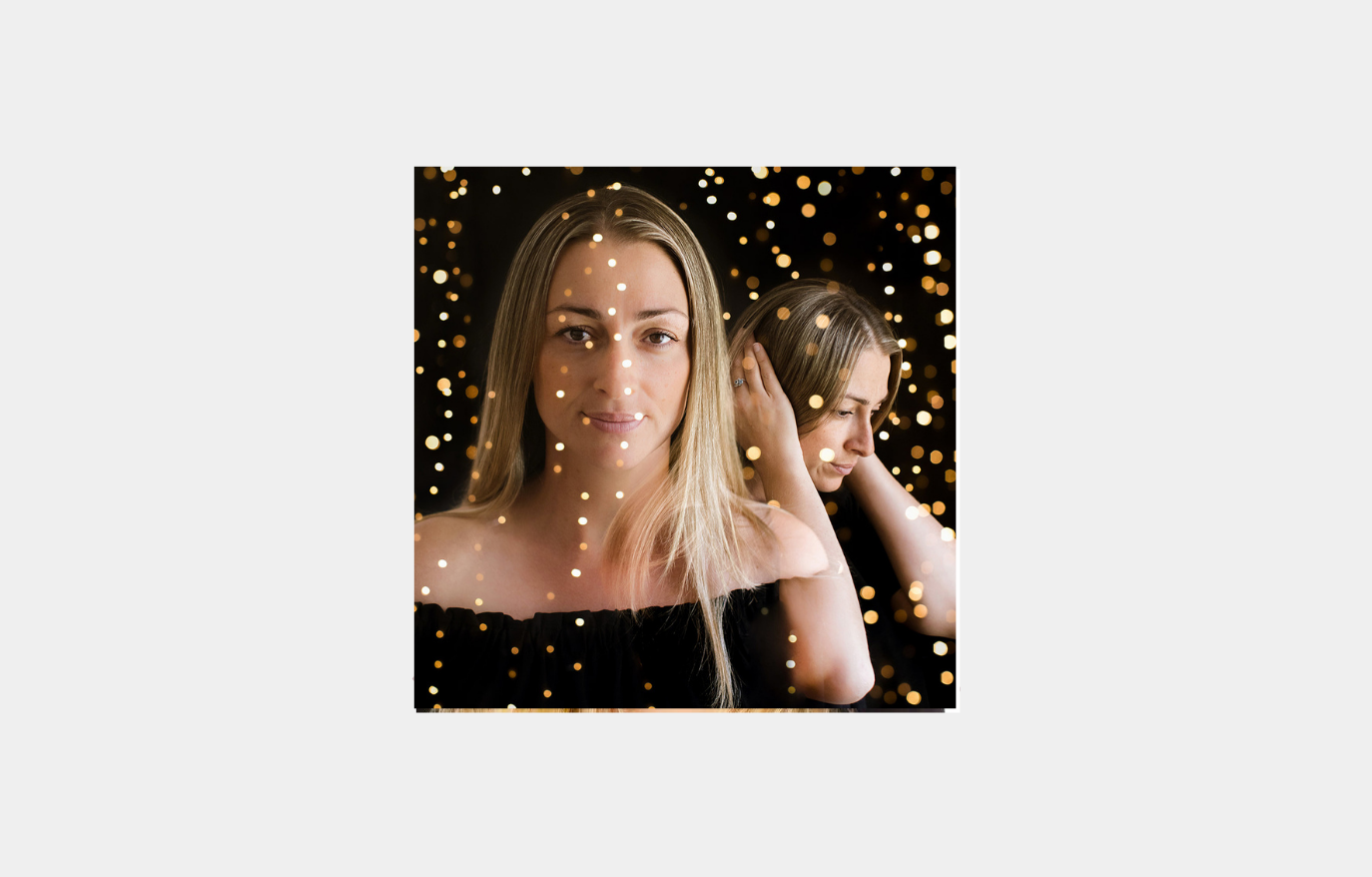 “I wish I had gotten a hearing aid earlier, my life would have been so much better." - Courtney Baker.

Courtney Baker and I are children of the 80s, but we grew up in different towns. Knowing her now, I’d like to think that if we’d been at school together, we would have been friends.

However, I can’t be so arrogant as to assume that I wouldn’t have laughed at her for her hearing loss along with other classmates. When we were at school, hearing loss wasn’t talked about, unless being on a class visit to the local aged care facility and being told to ‘speak up’. I was aware of schoolmates with physical injuries or visible disabilities, but not something invisible like a hearing loss or mental illness.

Today, it feels as though it was an era of ‘if we can see something, we can try to understand it’, but if it’s invisible, it’s ignored or seen as a weakness. The latter was very much the experience for Courtney throughout her school years.

Courtney was 18 months old when her mother became suspicious of her hearing. An assessment discovered that Courtney was completely deaf in her left ear and had 40 per cent hearing in her right ear.

“Before I went to school I didn’t have much awareness of my hearing loss. I knew I couldn’t hear as well as everyone else, but because at home things were adapted and changed to suit me, I knew no different.”

It wasn’t until Courtney started primary school that she started to feel different as children became aware of her hearing loss.

“I found it hard to hear in the classroom and missed out on a lot of instruction. Grade 2 was when the other kids were aware, and it was when I started to get picked on. That’s when things changed a bit for me.

“I remember one time in the classroom the teacher asked a question and I piped up and answered the wrong thing. The whole class laughed and the teacher said, ‘That’s just not what we’re talking about, Courtney!’. I rarely put my hand up after that.”

As Courtney was a diligent student, spoke well and consistently presented solid work, her educators assumed that she was coping well. That wasn’t the case at all. There weren’t learning aids or plans to support living with a hearing loss, so no special assistance was received.

Day-to-day life could feel turbulent without any consistency in the environments she was in. Courtney was ostracised and experienced constant troubles with friendships.

“I’d have a friend for a little while. Then they didn’t want to be seen as ‘uncool’ by hanging around with me, so they’d go off with the popular group and I was alone again. The cycle repeated every year.”

It changed in high school, as two really good friends provided Courtney with clarifications when needed. But given her experience in primary school, Courtney still hadn’t acknowledged her hearing loss – keeping it hidden. She refused to wear hearing aids or glasses because of the bullying, only telling her close friends.

“I didn’t want my teachers to know. Nobody knew. I didn’t get picked on in high school, but I really relied on my friends. Those early years had a massive impact on how I felt about myself. I had a very low self-esteem and low self-worth. It was just a part of me that I didn’t accept or acknowledge at all.”

In adulthood, these experiences led to her being regularly fatigued and a real perfectionist wanting to prove to everyone that she could do anything exceptionally well.

“I always went to the best places for employment, I always got the best jobs, I was always overachieving in a way. I just wanted to prove to everyone that I could do it.”

Being told by others that you are not enough is defeating. If this is about something you can’t change about yourself, it can be even deeply impactful, exhausting and lonely. For Courtney, her sense of self-acceptance didn’t start until she was 34, when she decided to get her first hearing aid (the previous one she’d had in Grade 5 remained in its original box in her bedroom). At the time, Courtney was being stalked by a former partner, which left her living in fear in her own home.

“For about a year I was petrified as soon as the sun went down. I was just worried for my safety. One day it dawned on me, ‘what can I do to help myself ? Maybe I need a hearing aid.’”

Having a hearing aid that suited her hearing loss was life-changing and was the initial step to founding her business, Flluskë.

Founded in 2016, Flluskë was born out of Courtney turning to creativity as a coping mechanism to deal with a very negative experience of workplace discrimination. Just after finding her voice in advocating for her hearing loss, the discrimination sent her into a spiral again of hating her hearing loss, hating herself and feeling like a failure. She began making earrings for herself and used her love of colour and art to positively impact the way she felt.

“I wanted to make my ears look better and prettier or whatever, so maybe I’d start liking them again.”

Receiving positive feedback from family and friends, she started making them for others; after she made a Facebook page, the orders started to come in.

Courtney was contacted by a client who shared the story of her deaf mother wearing earrings for the first time after she gifted her a pair of Flluskë earrings. The client had not noticed that her mother never wore earrings, but after she shared Courtney’s story it gave her mother more confidence.

Having a hearing aid that suited her hearing loss was life-changing and was the initial step to founding her business, Flluskë.

Realising her earrings were having an impact was powerful and spurred Courtney to continue growing Flluskë, going full-time on the company in 2018. Her earrings have now been sent to 14 countries, including 10 states in the US.

Courtney is always trying to create styles of her earrings for people to enjoy, and they’ve become a point of constant advocacy, initiating important conversations around hearing loss.

Social media and the ability to connect with people globally has been “a game-changer” for Courtney, far from the disconnection she felt in her early years with no other deaf people to talk with.

Courtney may not quite be at the point of feeling ‘pride’, but she is happy with who she is and continuing her journey of self-acceptance. She has shifted from skin-coloured hearing aids and hiding them with her hair to letting them be seen. She not only speaks up for what she needs but also advocates for others: “It’s been quite a journey.”

During the pandemic, most of us were challenged with daily mask-wearing. For people like Courtney who rely on lip-reading, it triggered incredible anxiety. When interviewing a hard of hearing (HoH) friend, it became apparent to them how simple tasks would become a nightmare.

After seeing a post by Dan Andrews regarding mask exemptions for people HoH, she was inspired to let others know. Further brainstorming led to the creation of advocacy posters with a QR code linking people to the Government guidelines.

“Businesses really got on board and happily displayed the posters and it really created a lot of awareness around here. It kind of snowballed.

“I don’t have a deaf accent and I don’t use sign language so my hearing loss is an invisible disability.”

With a small percentage of people knowing and using Auslan, the majority of people HoH rely on lip-reading to hear and facial expressions to follow communication. “I want to inspire them (people HoH) to start on their own healing or self-acceptance journey and start feeling confident to advocate for themselves. But speaking up can come with its own challenges of facing criticism and triggering previous stressors.”

Finding ways to advocate and connect whilst still protecting herself is a focus for Courtney moving forward.

“When I got a proper hearing aid that was compatible with my hearing loss, I got into my car after it was fitted and peeled a banana. That first peel I was like ‘OMG! What is that noise?!’ It sounded wet, but so strange.”

“Rain used to always have just one sound, but now I can hear individual raindrops. I can hear leaves moving in the trees. I can hear birds singing outside. There are all these sounds!”

When Courtney first heard her son talking with the new hearing aid, realising what his voice really sounded like was incredibly emotional. Over the next few weeks, Courtney started a process of learning sounds and associating them with what they are.

“I wish I had gotten a hearing aid earlier, my life would have been so much better.”

“I love hearing the water trickle over rocks in the river when I’m camping. I also love hearing magpies singing.”

Courtney’s most surprising sound was hearing her own footsteps. And her most nauseating sound is people chewing!

Courtney has provided some tips on how we as a community can be more supportive:
- When meeting people, ask them where they would like to meet. Let people choose where they sit at the table.

- Remember that hearing aids don’t provide perfect hearing. Even if someone is using a hearing aid, the environment can still create hearing difficulties. (“I’m still a person with a hearing loss even with my hearing aid in.”)

- Focus on people’s strengths and abilities.

- Ask them what you can do. There are different kinds of hearing loss so people’s needs will vary.