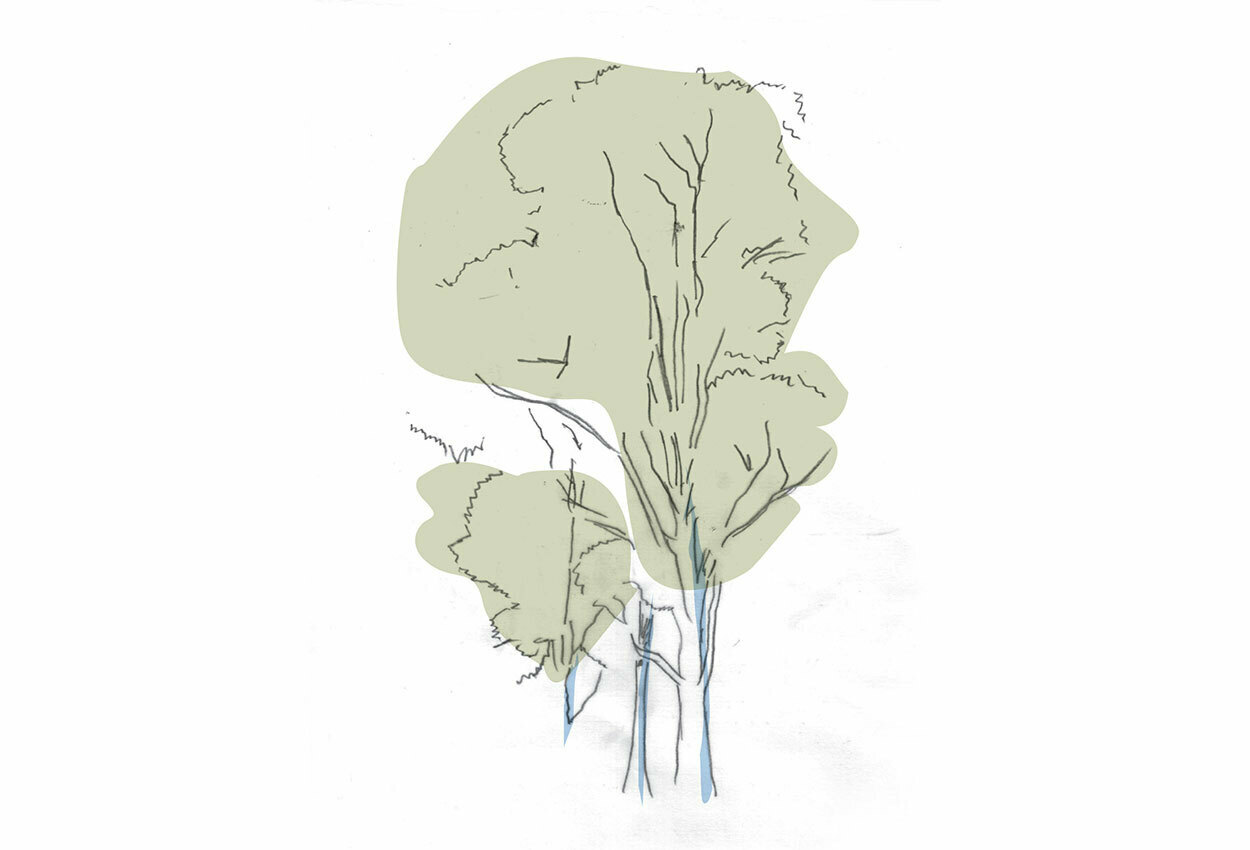 Cathy and Leon Trembath purchased the magical Madalya Estates, nestled in the Strzelecki Ranges, in 1976 with a goal of creating a place for ‘old bones’.

Former Melbourne firefighter Leon Trembath purchased the magical Madalya Estates, nestled in the Strzelecki Ranges, in 1976 with a goal of creating a place for ‘old bones’.
—

The land became a riverside holiday camp for his young family for many years. During that time, an industrious Leon collected a huge array building bits and bobs from various wrecking yards across Melbourne that he saved for the development of his future home on the site.

Upon his retirement, Leon built the home in Madalya over a period of a year with the help of a few friends. On Melbourne Cup Day, 1991, Leon moved into the almost-completed house on a full-time basis.

Leon’s wife, Cathy, was born in the US and worked as a social worker and community developer for many years there. Born nature lovers, Cathy and Leon met online at the close of 2000 and began a very long-distance relationship. In August 2004, Cathy migrated to Australia to live with Leon on this extraordinary property.

The couple’s deep connection with their land is revealed in the following short tale.

Cathy and Leon collected some gum seeds during her first visit to Australia. No, seed collecting isn’t your normal tourist activity, but it was definitely a way to learn about the man she was getting to know. Leon had sown the seeds in propagation trays before Cathy’s next visit. During that visit, the pair picked out the seedlings and planted them in tubes to further their growth.

Shortly after that visit, Cathy was diagnosed with Stage 3 breast cancer. Leon came to the US for her surgery and then supported her throughout the next five months of chemotherapy and radiation treatments via daily online communication. Immediately after completing all her treatments, Cathy returned to Australia, and the pair planted three of the young trees at the river by the entrance to Madalya. They hoped Cathy would see them grow.

The gums became known as Cathy’s ‘health trees’ and the couple have been lucky to see them grow into large, beautiful trees.

Learning of the very special relationship the Trembaths have with Madalya, we are grateful that Cathy and Leon were open to share more of their journey on living with the land.

Gippslandia: Can you please describe your property? What attracted you to the site?

Cathy: The property is 85 acres of healthy, regenerating temperate rainforest in the Strzelecki Ranges, along the Jack River, and includes three waterfalls and swimming holes. Damp and Wet Forest ecological vegetation classes make the property a beautiful, diverse habitat with abundant wildlife. There are almost one hundred species of bird, including lyrebirds.

Over the years, especially during his holiday trips with family, Leon had been looking for a property for his retirement. His cousins, who were from Port Albert, had purchased several titles in the Strzeleckis, which they combined to create Madalya Estates, a collection of about fourteen 50–85 acre properties. The family connection proved to be momentous.

Our home has been built strongly with the philosophy of the three ‘Rs’ —reduce, reuse and recycle. It is a rustic home built mostly with reused materials, passive or active solar design, with a wood combustion stove servicing a hydronic floor and domestic water system. It’s electrically powered by a micro-hydro system and solar panels with a solar tube hot water system.

We have 25,000 gallons (nearly 95,000 litres) of rainwater storage for our domestic water. As well as an additional 32,000 gallons (over 120,000 litres) of ‘firefighting water’, the two storages can be combined if needed and a sprinkler system surrounds the house and workshop. We also have 5 m2 cellar/bunker for last resort bushfire emergencies.

What has the transformation on your property involved?

It has taken over 46 years, with huge ongoing efforts to remove weeds and plant native trees and bushes throughout. The Jack River, which forms one boundary of the property, was originally surrounded by blackberries so thick in some areas that you could only hear the river and not see it. Today, there are stands of manna and mountain grey gums, which were grown from seeds we collected in the area, sowed and then planted with the help of the Landcare group.

The garden has been created and developed since 1991, using river soil, extensive composting and mulching. None of these are terribly difficult processes, but they require a commitment to physical labour and loving care on a regular basis. Our garden soil is now a gorgeous texture and every year we add manure collected from our neighbours’ property. Seagrass from the Port Albert foreshore is most often used as mulch (with permits from DELWP for collection).

Was there a specific catalyst to go off the grid and regenerate your land, or was it always the plan or your passion?

Leon had always been interested in native plants and environmental concerns. In the 60s, he wrote a column on native plants for the Dandenong Journal, well before the topic was popular.

As part of his passion, the home in the bush was always planned to be off-grid and having the waterfall enabled the option for using a micro-hydro system, which provides energy 24/7, unlike the solar panels of the day. The micro-hydro system required a bit of research as they were quite unique. Our home turbine became a model for others and many people have visited over the years. The cover story of the magazine, Soft Technology #55 (1996) (the forerunner to Renew), was on our hydro system. We were often asked, “Are you related to the Trembath that has the micro-hydro?”

What have you learnt about your land over the years that you’ve spent working, living and regenerating it?

It will take a considerable amount of time for the habitat to come back to a healthy rainforest, and climate change may be having an added negative effect as well.

We try to be very conscious of our world, our use of resources, the weather and our community, both human and non-human alike. While some might call it ‘work’ to keep up a property like this, with the investment in the native habitat, for us it’s a privilege and a pleasure! We have also put a Trust for Nature covenant on the property so that it’ll remain bushland.

What rewards has your chosen lifestyle has brought you?

Every day, as we walk around the property, we have the rewards of listening to the birds, seeing beautiful growth in a huge variety of plants, and just experiencing joy in being able to take a deep breath and delight in the surrounds.

It is an incredible stress reliever to be connected to the natural world around us. It has also been a joy to discover the existence of different plant species. Each winter, towards the beginning of spring, we have the joy of watching the orchids re-emerge near the river. There’s a wealth of fungi to be found, with an unusual fungus — Cordyceps gunnii (vegetable caterpillar) — that emerges in the autumn.

Is there wildlife that has returned to the area that has surprised you?

There have been two sightings of goanna and several sightings of the southern barred bandicoot. Over one hundred bird species have been identified, along with wombats, wallabies, possums, snakes, kangaroos, koalas (occasionally), echidnas, antechinus, platypus, burrowing crayfish, rakali, and some we haven’t spotted yet, but we know they’re there. The lyrebird population is healthy and growing, with several family groups here now. We are very aware that this land is shared by all these species and we try to be a part of the shared status.

Is living off the grid tough? Do you have any advice for others that may wish to do this too?

It used to be very tough, as there weren’t a lot of techies in the area to help with our system. That’s changed over the last five-to-eight years. However, you still need to be aware of how your systems work as you’re your own Minister for Energy, the Minister for Roads, and the Minister for Water and Environment. Now, with the Internet, research and finding assistance is also much easier than when the house was originally built.

You have to be prepared to deal with the variations and gifts of nature, be resilient enough to take setbacks and have an acceptance of projects being washed or blown away. A love of nature can provide the resilience to bounce back after nature shows you who is in charge! One hundred millilitres of rain in a day can be absolutely devastating. But you know that the sun will shine and you’ll again be living the dream.

Have there been any books, films or people that have guided/informed your way of living on the property?

Initially, we used the resources of the Alternative Technology Association (ATA) as they were the best and only resource for many years. They’re still an excellent resource for anyone thinking of living off-grid, with workshops and assistance for ‘beginners’ as well as experienced dreamers!

Living the Good Life by Helen and Scott Nearing (1954) was an inspiration. A major learning from this book was to make sure that you take time for activities that you personally enjoy and are not connected to your property. The tasks and work will be there tomorrow and every day to follow.

Not all Gippslanders will be able to live in such an environment. Are there steps that everyone can take to be more connected to the land?

Visit the land, spend time at the Prom or the many other beautiful natural places that exist in Gippsland. Learn to appreciate what is around you and be conscious of your resource use, as that impacts all of the environment, whether you live in the bush or in town. Consciousness is the most important message we try to impart to any visitors, and we have had many hundreds of visitors.

Finally, is there a poem or a work of art that best encapsulates the life you enjoy on your land?

Leon loves the works of Henry Lawson, who writes about the realities of living in the bush, revealing both the joys and hardships. The first poem that I ever learned was Trees by Joyce Kilmer, which begins with:

I think that I shall never see
A poem lovely as a tree.

—
In the days after our interview with this inspiring couple, Cathy shared the following news:

It is with great sadness that we have decided to sell our property. While we have the support of a fantastic community in Madalya, there are some regular tasks here that are just beyond our capabilities at our age. For instance, getting down to the river and walking across slippery rocks used to be easy, but ‘old bones’ don’t have the balance or strength that they once had.

We are looking for new owners who will love and care for the place, and will find the same immense pleasure in living here.