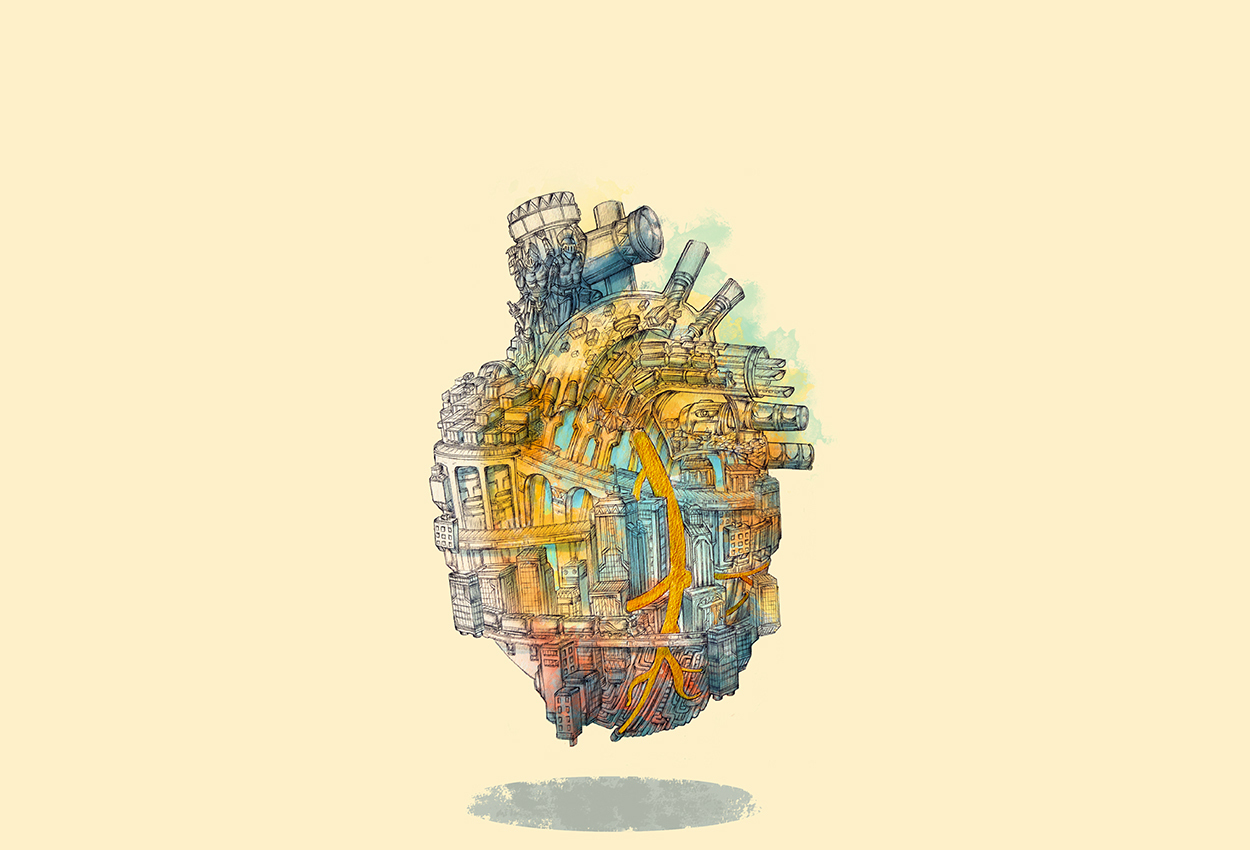 Marc-o-matic aka Marco Ryan is set to take you on a wild journey through his interactive and animated works.

Buckle up. Multidisciplinary illustrator, Marc-o-matic aka Marco Ryan, is set to take you on a wild journey through his interactive and animated works. Firstly, whip out your phone (the smart one, not the dumb cordless one with its base in the kitchen), and download Marco’s app, Moving Marvels (available on both Android and iOS). With the app running, hover it above his illustrations and watch these pages miraculously spring to life. Pretty freakin’ cool, huh?! Welcome to a brave new world of artful, interactive, storytelling and creativity.
—

Are you ready to delve further into the mind of Marc-o-matic?
Here’s a brief glossary to ensure we’re all in the same reality:
Virtual Reality (VR) is a computer-generated scenario that simulates a realistic experience.
Augmented Reality (AR) is the integration of digital information with the user's environment in real time.
Mixed Reality (MR) is a form of augmented reality that is somewhere between VR and AR. MR augments the real world with virtual objects that aim to look as if they are really placed within that world.
Immersive technology blurs the line between the physical world and digital or simulated world, thereby creating a sense of immersion.

Marco, can you please provide us with some details on growing up in Gippsland?
I’m from Traralgon and grew up in a multicultural Irish/Filipino family, so my childhood was a little different than most kids’. I enjoyed being surrounded by that fusion of cultures. On my Mum’s side we had a very vibrant Filipino community in the Valley, where celebrations were commonplace no matter the occasion, and on my Dad’s side… well, we just ate potatoes and complained about the weather.

I was more of an inquisitive kid than sporty. I’d spend a lot of my free time building stuff, crafting and tinkering with machines. I really enjoyed that. Dad was a mechanical engineer at the power station. After school, we’d hang out with him in the workshop building things like go-karts, motors, robots, trebuchets, catapults, crossbows, etc. I think a lot of those childhood moments have been largely influential in my illustrative style today. 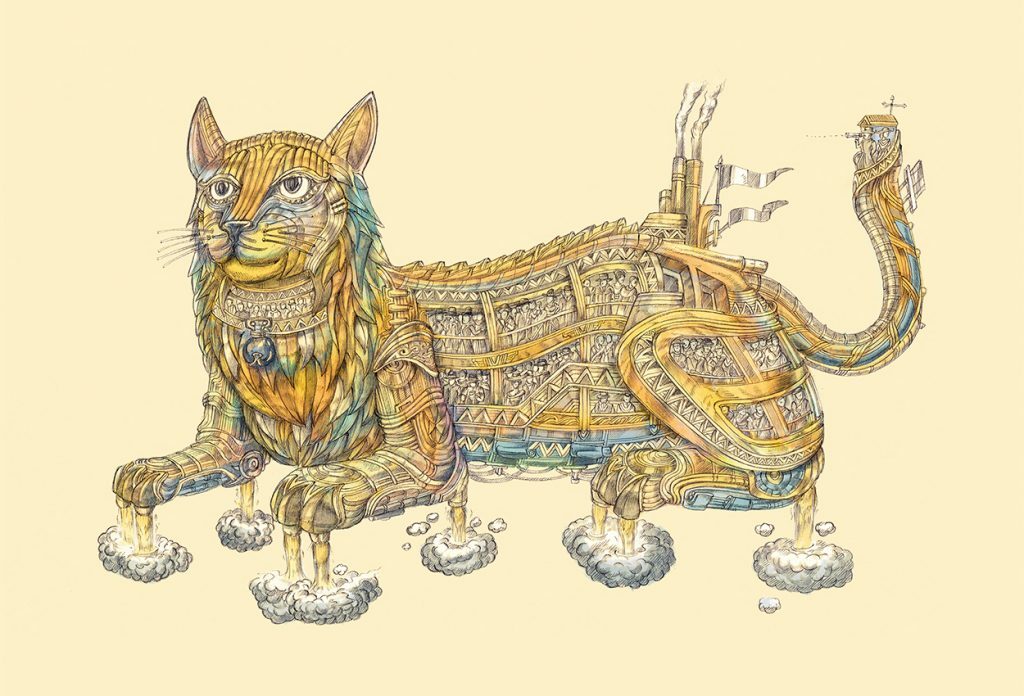 How or when did you begin to discover your artistic talents? What led you to illustration?
I don’t think we realise our creative potential until we see how people around us react to what we’ve created. As a kid, I’d draw at every opportunity. At home, in class, on private property walls, on Mum’s expensive furniture... If it was a flat surface, I guarantee there’d be scribbles on it.

I think it was the early recognition and attention from teachers and peers that made me realise I could make a future out of it.

I’d have to thank all those hours watching cartoons and playing video games for leading me to illustration. I was captivated by stories and curious about the processes behind them. Those sources fueled my imagination and inspired me to create my own stories or worlds one day.

Did you have any great teachers or programs that encouraged your creativity?
I was inspired by artists and storytellers, like children’s book creator Shaun Tan for his beautiful art style, illustrator Martin Handford for his intricately detailed Where’s Wally scenes, director Tim Burton for his bizarre characters and stories, and animator Terry Gilliam for his obscene cut-out animations from Monty Python (I don’t recommend or endorse Monty Python for kids—I was often left unsupervised).

I owe a great deal to one of my favourite art teachers who saw the potential in my work early in high school. She put the spotlight on me in our local community, which led to opportunities to showcase my work and even sell my creations at a very early age. I began to take my creativity more seriously, realising I could actually make something out of it. If you’re out there, thanks, Ms Taylor! 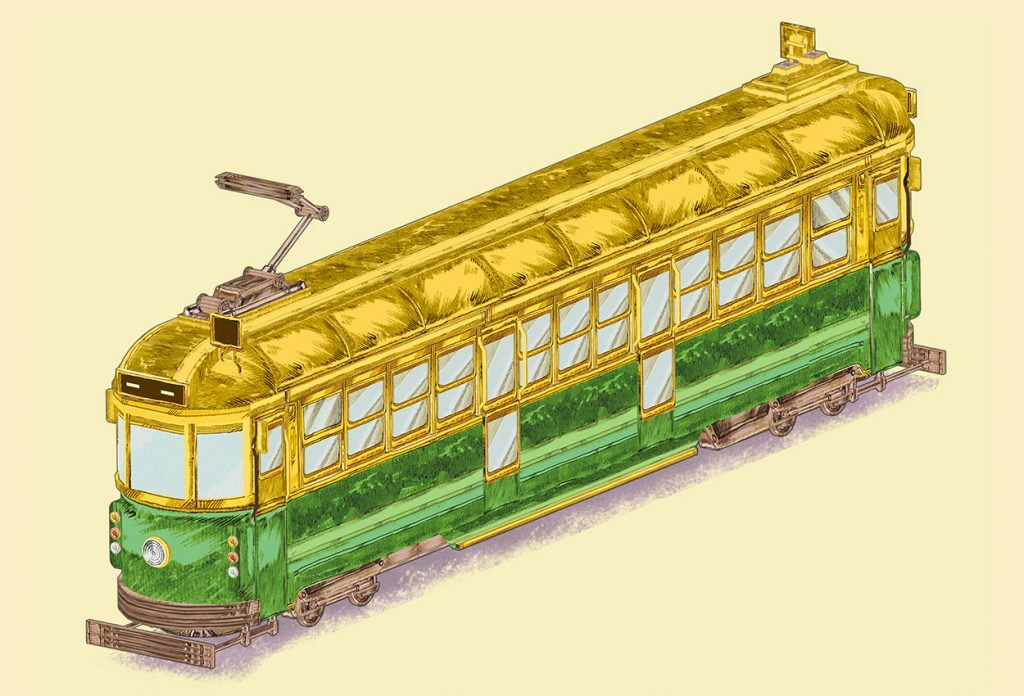 What was the catalyst that led you to explore AR/VR/MR? Was there something that you felt wasn’t being fulfilled with traditional illustration?
About two years ago I received a scholarship to travel to San Francisco’s Annual Game Developers Conference (GDC). It’s a week-long event where thousands of attendees from various creative industries showcase the latest developments in video games and associated technology. Being surrounded by amazing VR and AR projects created by independent studios was a pivotal point in my career. GDC gave me a chance to network with some of the big names in the industry.

From there I received support from Oculus to kickstart my very first VR narrative, Before the Junk Age, that became a solo project. I progressed to working with AR and eventually created my own augmented art collection, Moving Marvels.

I still love working with traditional mediums and good ol’ pen on paper. I think it’s even more fulfilling when you get to preserve that raw texture and aesthetic in the digital realm. Illustrating digitally doesn’t quite feel the same. 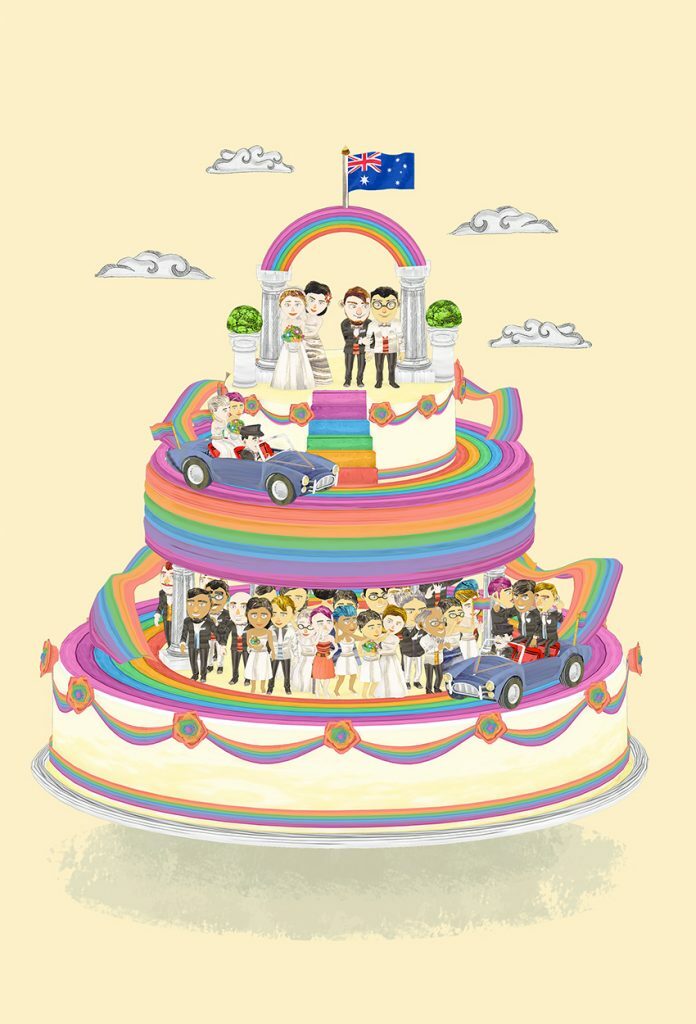 How difficult was experimenting with AR in your art creation?
For those that aren’t familiar with 2D/3D animation, game engine pipelines and programming, the learning curve may be a bit steep. There’s a lot of information to absorb. My early experimental processes were long and tedious, but through trial and error, I eventually streamlined my techniques and reduced the number of steps to just 305 processes.

You’ve mentioned that you’ve developed your own application. What is it and how did you create it?
AR technology has been around for a few years, but it hasn’t been applied as much in the artistic space. Using a video game engine I’m able to construct my augmented artworks, as well as develop their functionality to make them come alive. I built my own mobile application for Android and iOS devices called Moving Marvels.

I have to be in two different mindsets, one of an artist and the other as a programmer. Aside from thinking about how to create and execute the fun visual stuff, I have to be constantly aware of technical limitations with existing mobile hardware to avoid problems with performance or crashes. Researching technical specifications of existing mobile devices can help you plan ahead and determine how far you can push your augmented artwork. 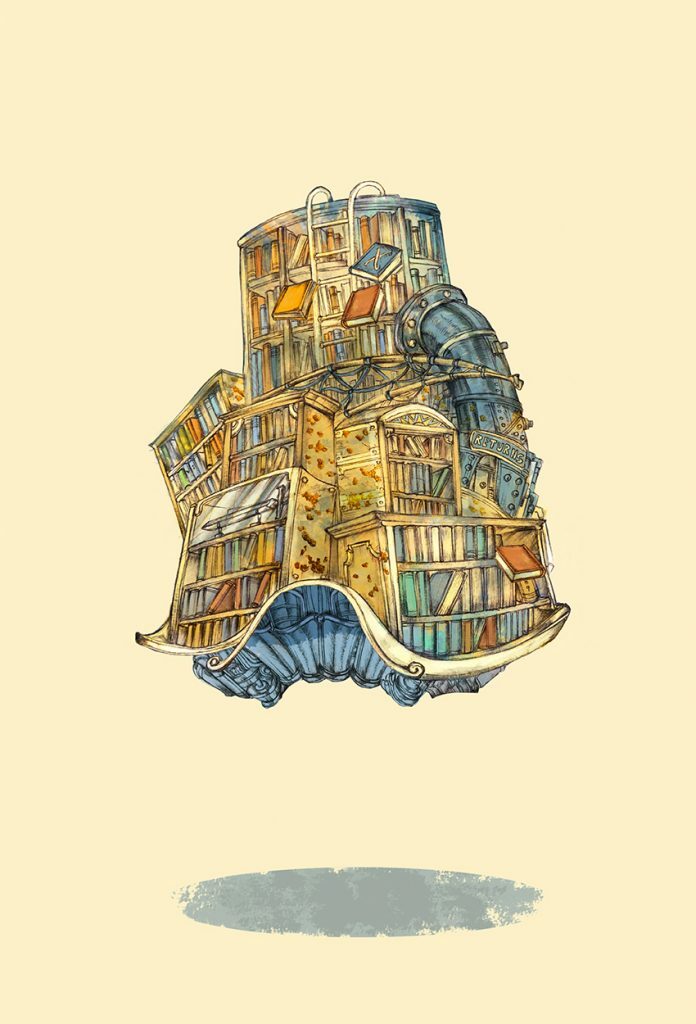 What could be done in Gippsland to better promote creativity and artistic careers?
Having industry speakers come to talk to schools would be a great foundation for young aspiring creatives. This enlightens students on the practicalities of what they need to enter these fields upon graduating high school. Local artist and tech meetups would be a great opportunity for enthusiasts to chat, collaborate and demonstrate their creations — inspiring a culture of creativity in the region.

The arts are almost always on the bleeding edge of new technologies and boundaries. Where do you believe these digital arts will progress to? Where would you like push to the art you’re creating?
Like any emerging technology, the dissemination of knowledge behind how the tech works eventually find its way into mainstream society. Techniques behind photography, film and animation, for example, have become widely commonplace and accessible. Similarly, immersive art practices will inevitably become consumed in the commercial space.

The evolving sophistication of immersive technology, and AR and VR content, will become a seamless part of our everyday lives. Right now most AR/VR content can be viewable via your phone, but the emergence of augmented eyewear will make streaming AR/VR content into our reality as easy as watching YouTube videos.

I want to create art that’s not just augmented, but also highly interactive. A fusion of art and gameplay; allowing audiences to explore the works from numerous angles and interact within them. I’m currently transitioning my augmented art and techniques into children’s book storytelling; working to create a blend of traditional storytelling and immersive technologies, so kids can interact and solve puzzles within the art in order to progress through a story. 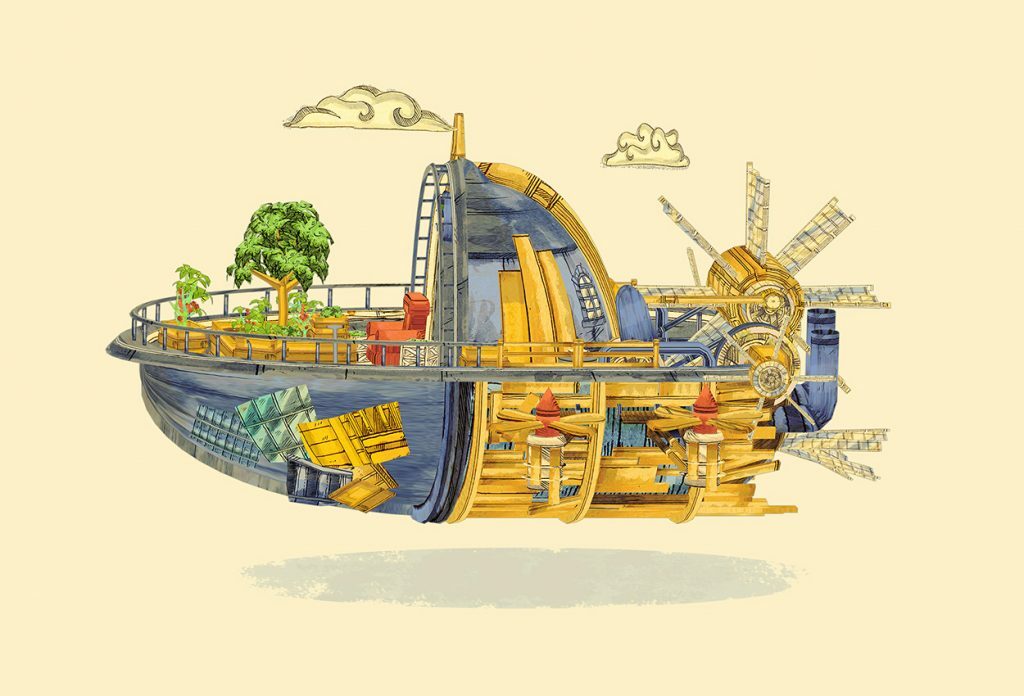 What have been your proudest accomplishments in your career so far?
Having no prior knowledge or experience in the field, I think making the leap into exploring immersive tech was a huge feat. As a one-person team, I produced my very first VR animated film, Before the Junk Age, which was featured at the ACMI (Australian Centre of the Moving Image) in Melbourne. After that, I worked on one of the world’s first AR art picture books, Prosthetic Reality, and since then I’ve been showcasing my own AR art and storytelling collection, Moving Marvels, in Victoria and San Francisco.

These projects have opened up several opportunities and provided me with a platform to consult and pass on my knowledge to companies and educational institutions who are looking to explore AR and VR.

Please provide some words of advice to others that may wish to pursue an interest in digital arts?
Stay curious and open to learning new skills. Understanding disciplines outside your own interests that can potentially complement your current skill set allow you to expand on how you execute ideas. We live in an age where learning how to do something is just a Google away. So, stop watching cat videos and start learning, Barbara! Jeez!

What are your artistic goals in the future?
I’m like a leaf in the wind, in a blender, with no ‘off’ button... My creative career has always been a little turbulent. That’s my fault. I get bored easily if what I’m doing gets repetitive.

As immersive technologies offer artists multiple opportunities to express stories and ideas in new and innovative ways, it’s an area I’d like to continue to work in. Over the years I’ve been expanding on my own fictional story world called the Junk Age, which is essentially a reflection of the future state of the world—where endless mountains of junk engulf the world and animals are remembered merely as myths and legends. It’s something I hope to share with a global audience as VR animated films, AR artworks and picture books, to interactively educate people on the current socio-economic and environmental issues that we’re facing.

—
You can keep an eye on Marco’s innovations at marcomatic.com and @marcomatic on Instagram. 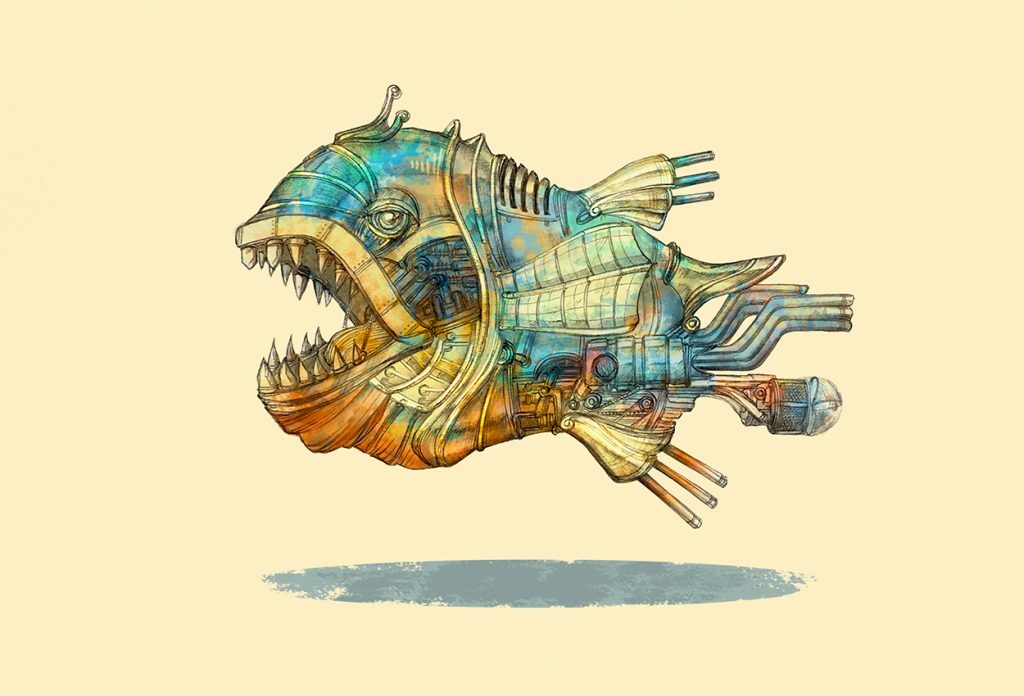