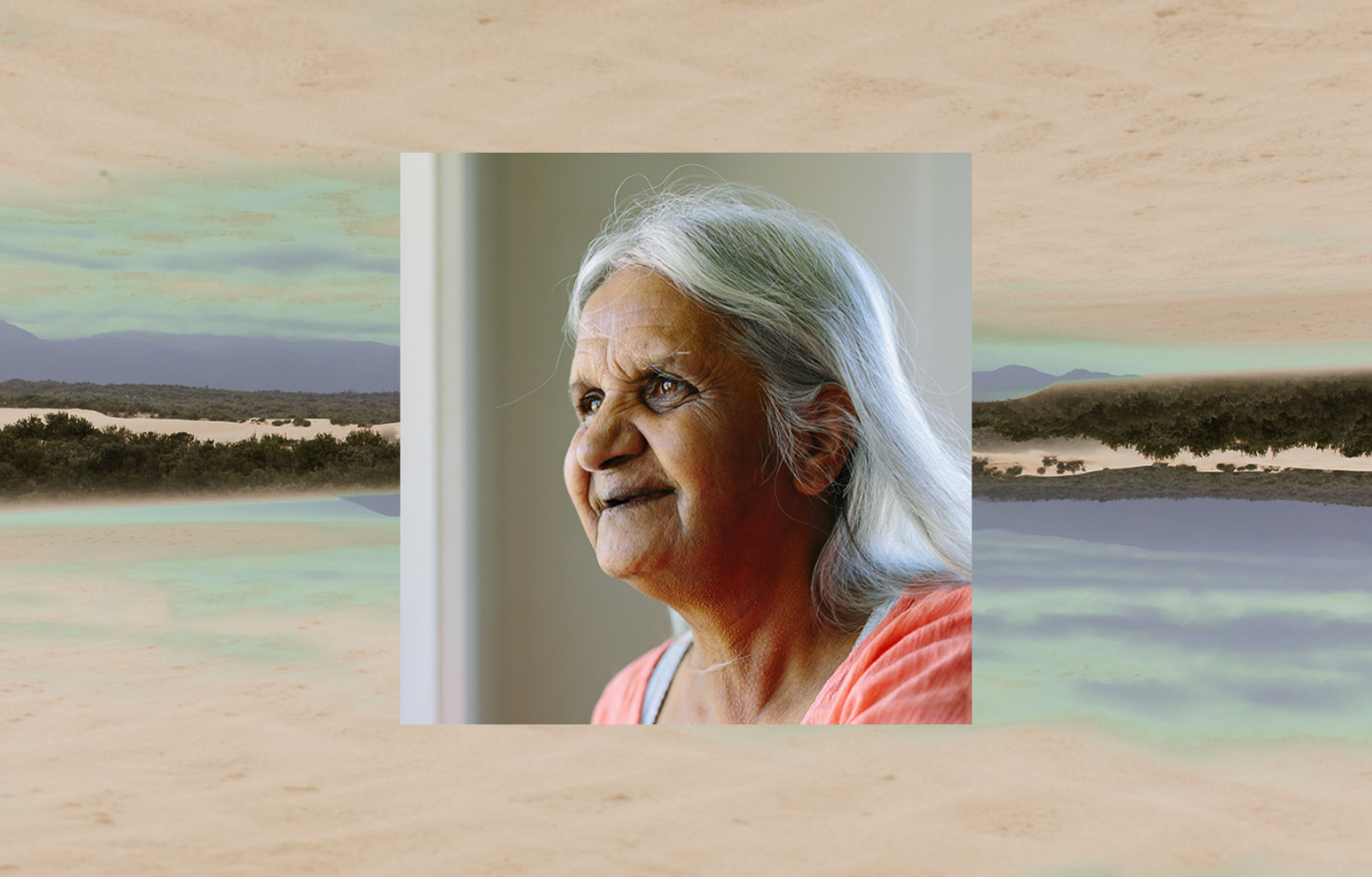 A busy grandmother and resident of secluded Lake Tyers, Amy Hood can be difficult to reach. Her poetry however is part of herself she would love to share with the world. With a pen and paper by her bed at all times, Amy records moments of family, history and culture, inspiration often striking at 3am.

“I get up, write the time down and the date. I know it’s silly, but I do the time. To let me know what time I started and how long it’s going to take me to finish it,” Amy explains.

“I’ve never published any of my work but I’d like to. When I read it to the kids, I explain it to them, what it’s all about. Then they’ll remember and can look back over the years and say ‘Yeah, that’s what happened”.

Amy grew up in Bruthen but has spent the last thirty years in Lake Tyers. It is Krauatungalung Country and highly significant to Kurnai Traditional Owners.

Amy recalls many stories from the area that her grandfather, who she calls Pop, used to tell. She had a special bond with him and remembers taking a great interest in what he had to say when she was a child.

“He was born and hunted on the land around here,” Amy says. “There are few people that sit down and talk with their grandparents, but I took the time to stay with him and listen to his stories. I came from the man himself.

“Pop showed me places where he used to camp and hunt and everything.

“Just listening to his words, I put some of them together, the stories that he’d tell and it worked out right.

“We lost our culture at Nowa Now, at the school there. We had to sing God Save the Queen. But otherwise, I’m getting back into it.”

Amy’s Pop taught her native tongue and she says she would love to use the language in her poetry, if only she knew how to spell it. A grandmother and now a great-grandmother herself, she ensures that she passes what culture has been preserved down the line. Referring to the words in her featured poem – being together for united we stand – Amy says her family still gathers like the old days when mobs sat around the campfire, having a yarn and a laugh.

“Even my brother’s and sister’s grandchildren, they all come with me,” Amy says. “I just say coming? They go where? I go walkabout!

“I take pots, tucker, water… I take them all out to camp, and while they’re doing their own thing, playing, fishing and swimming, I start to cook and have all the tucker ready for them.

“My grandsons are starting to get into making boomerangs and spears and all that now. We set up the my my’s now and put the baby under there for a feed and sleep. I’ve done that with all the kids that come out here. I don’t let them sleep on a mattress. I let them sleep on the hard ground, so they can feel Mother Earth.”

Amy began recording moments like these when she was aged in her twenties. Her daughter’s traumatic birth first sparked that creative part of her.

“I nearly lost her,” Amy explains. “She was born with two holes in her heart. But now she’s blessed me with four grandchildren and a great-grandson. Writing is a way to express what I’m feeling. If I feel something I write it down on paper. I shared my poem when I first wrote it, that one about my daughter. Writing is a healing process for me. I love it.”

Amy’s featured poem, We are proud, goes beyond family. It is a reference to one of the largest ever marches staged in Sydney. On January 26 1988, the bicentenary of the First Fleet’s arrival in Australia, more than 40,000 supporters gathered to raise awareness of Indigenous issues. It instigated public debate about the way we celebrate our Indigenous and white history.

“We drove a bus up: my Mum and Dad, my daughter [and] my cousin, helped drive,” Amy says. “It was quite the journey. We made friends along the way. I remember we got up there at five-thirty in the morning and slept under the stars at La Perouse.

“It was too deadly: seeing a lot of people come together for the one thing, our rights.”

Amy feels society has come a long way since that march but says further understanding of Aboriginal culture and customs among authorities is important to keep moving forward.

“We have different colour people but we’ve all got the same-coloured blood,” Amy says. “Me and this white lady, we just run amuck. We show how people should act. It doesn’t matter what colour we are. We’d just sit down and laugh and laugh and laugh, and they told us to be quiet because we were in bingo playing!

“I’ve got a lot of white friends. My white friend, she was my best friend, but now she’s passed. Now, her kids are looking to me. They don’t walk past me; they toot the horn if they see me. They come up and give me a kiss and a cuddle to see how I’m doing.

Amy is well-known from Lake Tyers to Warragul and is highly regarded among Kurnai Elders, who nominated her for Gippslandia’s feature. She has strong connections to Lake Tyers with both her parents buried there and she finds solace in the area’s natural environment, often writing on picturesque Ninety Mile Beach.

“I’m a big fan of the beach. I love to sit down, stay there and don’t move. Out under the stars. That’s how good it is,” Amy laughs. “That’s where I do most of my writing.”

We are proud by Amy Hood

We are proud of our colour and our race, no
one can take our hearts and our place,

for this is our land, and we don't want second
hand, being together for united we stand,
coming together across far and away, looking
around and having our say,

for this is our fight, and we know what is right,
because we have everything set in our sights,
like we love our people,
and we love our culture,
we love our ways and we think of our future,
and we miss the days
sitting around the fire site,
talking and laughing that is all so tight,

now in our hearts, and in our minds,
we know we can't turn back the hands of time,
and our people before us
showed how they survived
hunting, working, and staying alive,
like collecting the fruit that grows on our trees,
and chasing the kangaroos that still is our feed