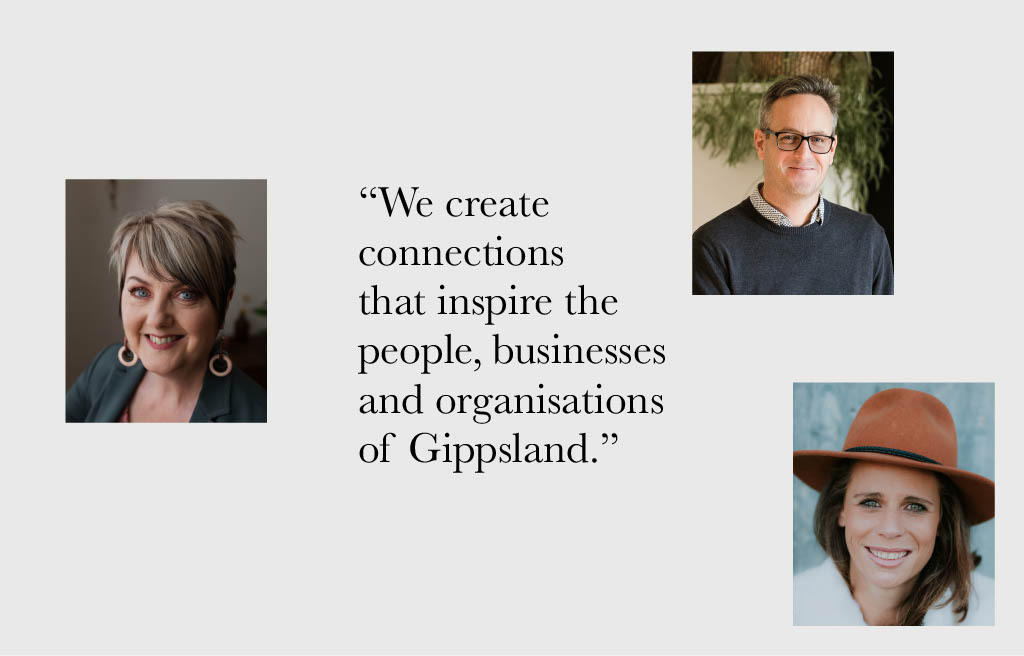 Gippslandia's Ambassadors have given us so much small-town love, they're creating community.

Eighteen issues in and this one is all about small towns. I’m not sure how we define a ‘small town’, but having grown up in Morwell, I’ve always felt the small-town love Gippsland has to offer.

That small town love manifested itself in so many ways. Back then, it was the local cop and footy coach giving us a free taxi service in the divisional, the mate with the Austar gold card, the free Maccas from your friends working for Ronald, and the kind neighbours who looked out for your elderly grandparents.

I spent a short amount of time in Melbourne. Like many, I moved there under the guise of ‘chasing opportunity’ that I never realised was right in front of me. Lo and behold, my first weekend back home and I met my now wife, but that’s another story for another column.

I raise this small-town love with you because in my short time living in Melbourne’s north, I didn’t get the ‘hello’ or the head nod from strangers in their yard. It very much felt that it was everyone for themselves. In my first week home, I had to give way to a cow on the way to work and would lose my entire lunch breaks after bumping into old friends down the street. To me, this defines small towns.

Now, I’m immersed in business, at many levels, and I’ve come to realise this same small-town love exists in our business community. Sure we’ve got ‘buy local’ or ‘support local’ campaigns that run to varying levels of effectiveness, but that’s not what I’m talking about. It’s the business support, people giving their time and assistance to help others (sometimes even competitors) to grow and flourish.

You’ll have seen that we recently announced three Gippslandia Ambassadors. The criteria for us was simple: they’d thrown their support behind us and were genuinely involved within the community.

Maree McPherson, Sallie Jones and Ryan Leslie have given us so much small-town love — their time, their networks, their expertise and guidance. It hasn’t been done for personal gain, but for communal gain. They believe in what we’re doing and they back us. It’s not Gippslandia they’re backing specifically, it’s the community. Maree has brought a wealth of expertise through the region via her webinars and board positions, Sallie has been a rock for her farming community and Ryan has given plenty to his local junior footy club.

“What they’re doing is creating community."

What they’re doing is creating community, which then increases liveability, and eventually impacts the price of your dwelling (that formula wouldn’t have gone far in my high school days). So next time you see them, shout them a drink and say thanks.

They’re not alone, having been involved in sport for my whole life, I could fill this space with names like Jeff and Carmel Gniel, Brian Maxwell, Col Scammell and Jenny Foat — all people who have donated hours over many decades for communal gain and the growth of people in the community. They’re inspiring.

With them, we share a common purpose in creating growth and community, and we’re doing that by showing what’s possible: the best of what, who and where in the region.

As we declare in Gippslandia’s purpose statement:

“We create connections that inspire the people, businesses and organisations of Gippsland."

“We create connections that inspire the people, businesses and organisations of Gippsland."

We’ve spent the last 18 months building towards a sustainable business model and in that time the world has been crumbling around all of us. It takes its toll.

As we look to the future, we’re faced with decisions. Rolling back to just creating the publication is a viable option, thanks to our fantastic partners, but is it enough? We’ve grown to love the projects and initiatives we’ve run for the community, the strategic conversations we’ve been involved with and the events we’ve attended and supported. Anything less feels like a failure.

Whilst we’d love to take our endless ideas and grow the brand further and subsequently the social capital of our region, at this point we’re under-resourced to do anything more than create a publication.

So here we are — maybe what you’re currently holding will become a limited edition? Maybe it’ll change shape or form? There’s a lot of talent in the Gippslandia team and the community and I strongly believe that if we can invent what we have now, we can reinvent what we need for the future.

After all, we started from the bottom now we here... I mean, we’ve done a heck of a lot with nothing. Imagine the impact we could make with a dedicated team working to grow our community by showing what’s possible and the best of what, who and where we are.

To wrap up, I hope 2021 is good for you all. Take a moment to reflect back on the ambassadors I mentioned. You won’t be surprised to know that as the going got tough in 2020, they chose to do even more for their communities. They’re an inspiration — they’re Gippslandian.

-
If there is something in particular that you wish to know or discuss, please get in touch and I’ll either address it here in a future column or via email at md@gippslandia.com.au.