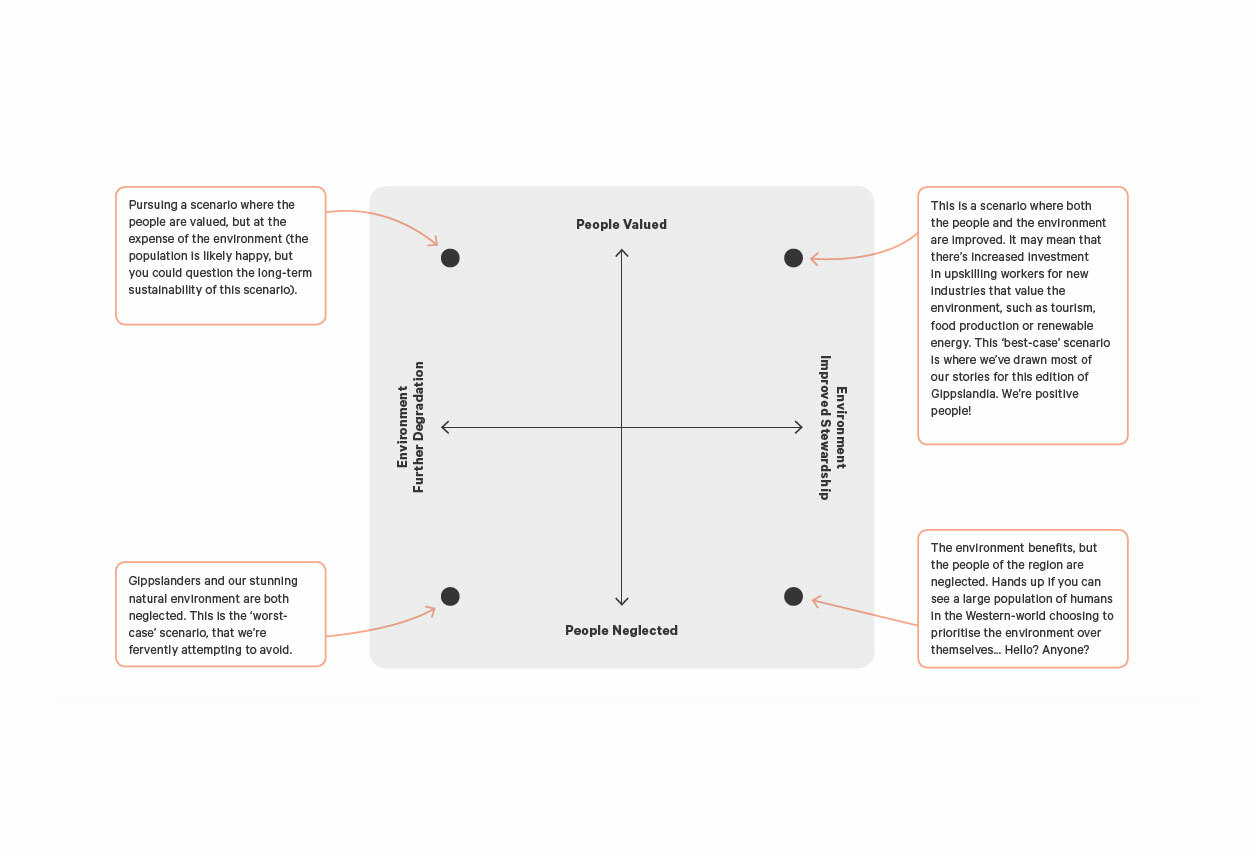 In Gippslandia #6, we present startups, new starts or restarts that support the ‘best-case’ for our region.

Startups are still pretty hot right now. Maybe the ‘cool’ edge has come off them a bit, now that Bitcoin, Ethereum and the other cryptocurrencies (not to mention CryptoKitties – check it) have commandeered the media’s ‘hype-train’. Next stop... another tech bubble?
—

Bitcoin and startups echo the description realtor Peter Clarke provided in Gippslandia #5, regarding the local ‘legends’ that have seemingly made remarkable profits by flipping houses bought on marginal initial investments. It’s as though every other champ is making millions from bitcoin or multi-millions for the sale of their ‘simple’ startup. You’re left standing there, hands belligerently on hips, asking, ‘Why not me?’.

As you’ll read in a future piece, LaunchVic differentiates a small business from a startup by defining the latter as, ‘a business with high impact potential that uses innovation and/or addresses scalable markets’. Well, does that make Gippslandia a startup? We certainly discuss the potential of scale. Why couldn’t a ‘Gippslandia-equivalent’ be produced in other regional areas? I’d freaking love to get the team together for a brainstorming session on what to name a new newspaper based in Wagga Wagga! But LaunchVic’s requirement of having ‘high impact potential’, that’s a bit tougher to fulfil. As lofty as our dreams are, I’d be more than ecstatic if Gippslandia could just provide a tiny contribution to the growing gang of passionate people that are undertaking projects, businesses and community programs that are improving our region. I believe this motley crew of ‘do-ers’ can reach a critical mass that achieves a positive change in Gippsland.

Similarly to other startups, we’re trying to achieve a solid product off minimal resources. It’s a project of passion. Thankfully, we don’t have the Winklevoss twins, but we’ll still have our failures - which is why we have currently got our inaugural Reader’s Survey online, so you can assist us in improving Gippslandia (it’d be amazing if you had time to fill it out, thank you). But, rather amusingly, the Gippslandia startup isn’t based on new technology. Quite the opposite. Newspapers have been kicking around since Antwerpian Johann Carolus printed the Relation in 1605. Ever since I received my introduction to independent publishing a decade ago, I’ve constantly heard the calls that, ‘Print is dead!’. The Internet was supposed to dance on the grave of magazine, books and newspapers. Yet, independent publishing is enjoying a halcyon period.

Hmm... kinda reminds you of a region that we reference quite a lot ‘round here…

Many studious and wise folk predicted the demise of print publications, and there are plenty of negative outlooks on Facebook, and elsewhere, regarding Gippsland too. Now, I’m not a fortune-teller, soothsayer or even a sangoma that can chat to the ancestors or read fall of the bones. But I recently read about some scenario planning methods that were developed with complex systems theory in Frans Cronje’s newest book. In (very) loosely applying his method, I feel that the two most substantial influences on developing a dynamic Gippsland are the people and our environment. When creating an independent publishing venture, I think that quality needs to come to the forefront. We understand that people love storytelling, and have done so since shortly after we decided standing erect was a rad posture. Therefore, engaging storytelling can ensure the relevancy of print, just as it’s leading to an abundance of glorious podcasts. In Gippsland, we should focus on nurturing quality humans and responsible stewardship of our environment. That’s why, I’ll create my scenario plot with valuing people on the y-axis and the environment on the x-axis, as described in the following diagram.

Admittedly, I’d likely be better at maths if Xav hadn’t spent so much time writing a little game on my graphics calculator in high school, but I believe you’ll see that we’ve created four scenarios in our four plot quadrants. Let’s explore them in a clockwise motion: 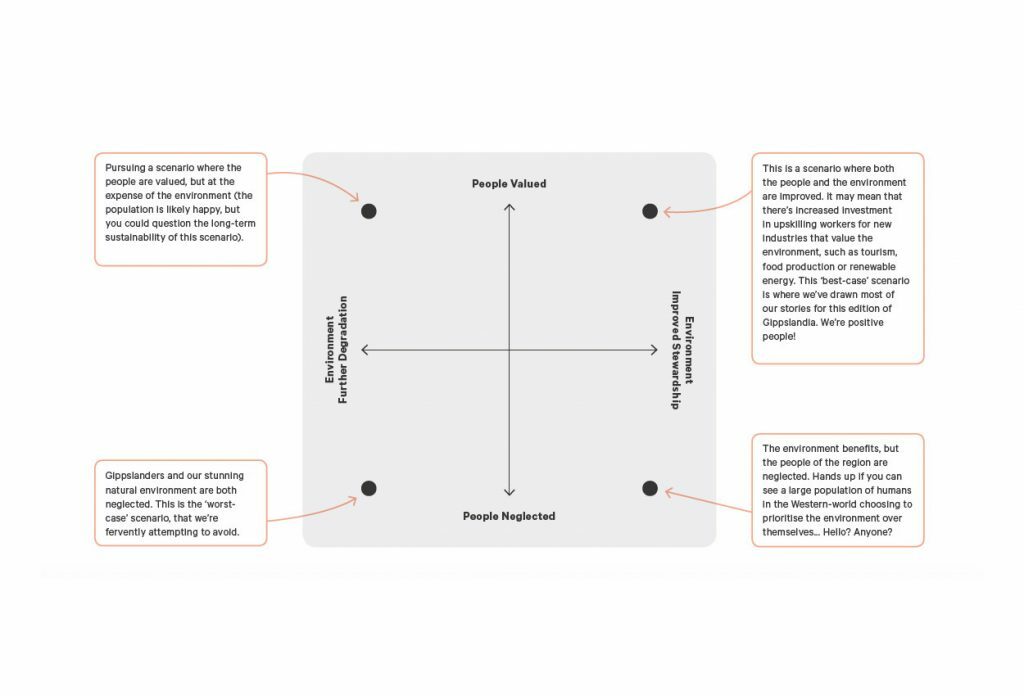 In Gippslandia #6, we present The Grants Hub, a tech startup that’s benefitting community organisations; a collection of women that are simultaneously juggling the challenges of small business and parenthood; people that are adamant that Gippsland’s a world-class dining destination; a selection of varied folk that are loving their move to our region due to the welcoming people and the great outdoors; we check-in on a familiar theme park given a new lease on life and we learn about exciting new projects from our industrious brethren. They’re all startups, new starts or restarts that support the ‘best-case’ scenario all the way, baby!

Systems thinking relies on holistic thinking of a problem; that a single change in the system can affect the outcome of the entire system. For instance, it can relate to the idea that a butterfly flapping its wings in Portugal can lead to the President of the United States of America being sued by an adult-film actress, resulting in his resignation. More promisingly, the new project that you start-up today, can make our region way cooler tomorrow.