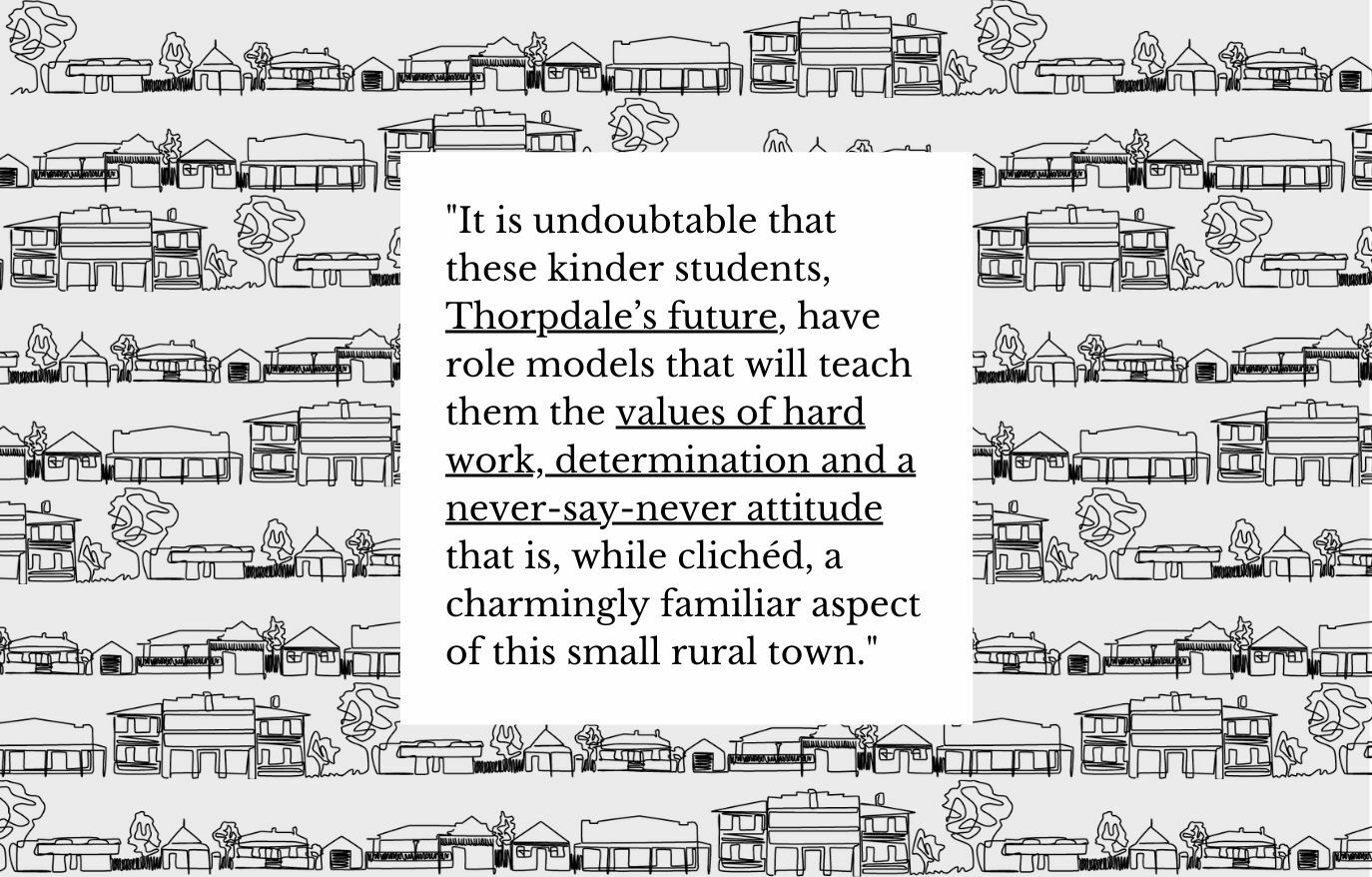 Whatever it takes, that's the spirit of the small town of Thorpdale.

In late 2019, thanks to the Baw Baw Shire’s Placemaking Program, the people of Thorpdale were able to allocate grant money to a project of their choice. They chose to assign a portion of the grant to upgrading the transformer at the football oval, strengthening the lights for night games and training. This is an apt metaphor for the Thorpdale of recent years: when simply keeping the lights on would have been enough, its residents added more.

In 2021, post-COVID, the success and impressive size of the town’s revived biennial Potato Festival has become an ironic Achilles’ Heel. The iconic event, which showcases what the town is best known for, the appropriately humble potato, has been cancelled.

Many were clamouring for the Festival’s revival, but this mountain must have just been too tall to climb, which is a rarity. Because if there’s any town that can keep tradition alive and not let important institutions fall by the wayside, it’s this one.

Take Thorpdale’s lone pub. In 2017, the Traveller’s Rest Hotel was gutted in a fire that tragically claimed the life of stalwart publican John Bantock. Built in 1937, the pub had to find new owners and undergo major works in order to restore the building to operational status.

“Thorpdale is a town where neighbours fight for each other."

The renowned pub still bears the hallmarks of its old-school pedigree: classic brown brick façade, retro lettering above the door. But now, with a fresh lick of paint and a newly constructed beer garden, the born-again venue stands as a visual reminder of the community’s tenacity.

Thorpdale is a town where neighbours fight for each other. Last year, when the post office was set to be vacated and buyers were not initially forthcoming, saviours were located just a few doors down.

It was the owners of the award-winning bakery who boldly took on the prospect of amalgamating the post office with their own business. They utilised their extra space by moving the mailboxes to the back of the bakery, before installing a counter inside with all the fittings of a regular post office.

But Thorpdale’s post office is anything but regular. Now, you can assuage the despair brought on by the bills you’ve just received with the purchase of a meat pie in one fell swoop.

A similar plan was hatched when the governing YMCA decided to close Thorpdale’s kindergarten. When questions arose surrounding the safety of the town hall that houses the program and funds for potential repairs didn’t exist, it was decided that the children who attended the Thorpdale kinder would have to relocate to nearby Trafalgar.

Led by the kinder’s parent’s committee, in conjunction with the town hall committee, the community scrambled to keep their beloved kinder alive. They had one goal: if the kinder couldn’t operate in the hall, then it would still be located somewhere in town. Several possibilities were considered and deemed unsuitable for the demands required of the kinder program before the primary school principal, Grant Nicholas, intervened with a familiar option.

“I stepped in and said that we at the primary school would love for the kinder to move [here] temporarily,” he says over the phone.

He explains that a move to the primary school was all okayed initially, but was eventually nixed somewhere within the Department of Education. It didn’t matter though, as late last year, after more meetings and continued community insistence in the safety of the hall and the importance of the kinder to the beleaguered town, the YMCA decided to “somewhat randomly go back to using the hall.”

“[The decision] was a surprise … but the right decision was made short-term. It’s what the community want. They don’t want to lose the kinder at all,” he says, before stressing that the town still needs “a place with long-term sustainability, which the hall [may not] have in the eyes of the powers-that-be.”

“Does it really take a village?” I hear someone ask. You bet it does.

That’s why Mr. Nicholas is still working to get the kinder on-site at the school, although the process is proving to be “very slow.”

“The Department’s view is that it will only happen if the area is a growth corridor, which Thorpdale is not.”

This is undeniably true, as the school generally has fewer than 60 students attend each year. Nevertheless, the embattled principal thanked everyone who showed support for the proposal and signed the petition to save the kinder. Particular thanks were reserved for the leading members of the parent’s and town hall committees who put in the back-to-the-wall hard work that has become ubiquitous with Thorpdale in recent times.

It is undoubtable that these kinder students, Thorpdale’s future, have role models that will teach them the values of hard work, determination and a never-say-never attitude that is, while clichéd, a charmingly familiar aspect of this small rural town.

“Does it really take a village?” I hear someone ask. You bet it does.