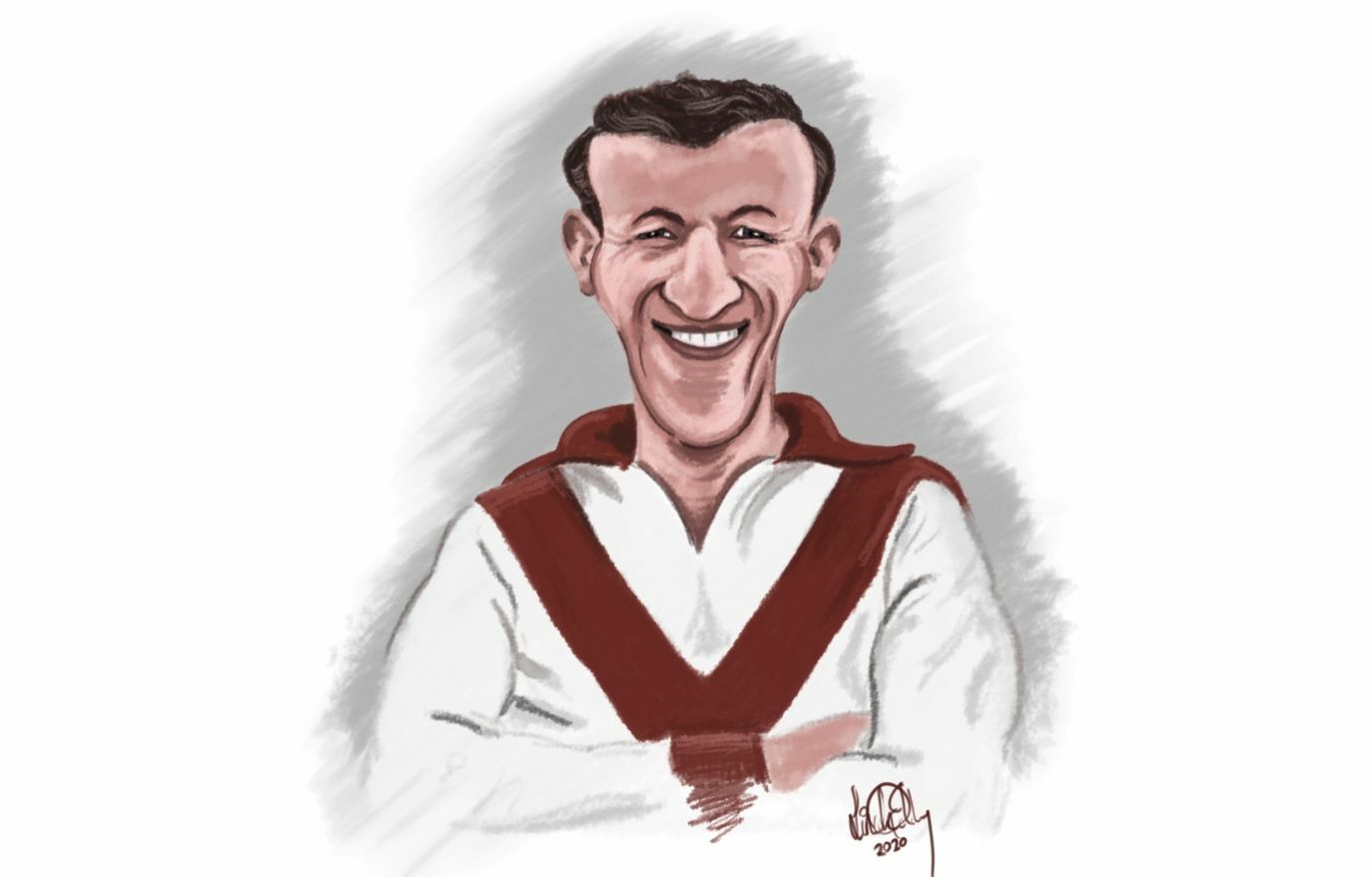 The title of ‘legend’ can be tossed around too loosely at times, although few could argue the late great Kevin Hogan is not befitting of this moniker.

After spending more than 50 years involved in Gippsland sport, Kevin Hogan was laid to rest last November at the age of 85.

Over one thousand mourners congregated at St Patrick’s Cathedral, Sale, to pay their respects, before making their way to the wake, which was fittingly held at Sale Football-Netball Club, a place Kevin called a ‘second home’.

Journalist Liam Durkin was fortunate enough to have an extensive chat with Kevin about his brilliant career just three months before his passing.

Anyone who has played or been involved in sport in the Sale area during the past half-century would have heard the name Kevin Hogan. After all, it would be hard not to, as he has spent virtually his entire working life covering, commentating and taking photos of local sport since he arrived in Sale in the early 1960s, after his playing days in the VFL with South Melbourne finished.

His enthusiasm, dedication and sense of recall have elevated him to living legend status, and until very recently, the 84-year-old could still be found bright and early, camera in hand, at any number of sporting occasions involving local teams.

Coming from a family of eight and hailing from Violet Town in the state’s north-east, Kevin’s passion for sport was evident from an early age, as he went to extreme lengths just to play a game of football.

“I used to throw my bike in with the mailman on a Friday night and go up and stay with a mate,” he said. “On the Saturday we would play, then I’d ride from Benalla to Violet Town, which is like Rosedale to Sale, on the Sunday morning after the game.”

One could only imagine the thrill Kevin must have felt when he had his first brush with football royalty, which came when he was part of a schoolboys team that played in Tasmania during the 1940s. The representative team Kevin was a part of were invited to watch a training session conducted by the great Roy Cazaly, something Kevin said he would never forget.

“We went to their training and Roy Cazaly had hurdles out on the ground and at the end of the hurdles he had a bloke with a ball on a fishing line,” he said.

“The players would be jumping these hurdles and the bloke with the ball would be flicking it up in the air and the last bloke had to catch it as he went over.

“People said that Cazaly’s coaching was years ahead of everyone else, all the ideas he had.”

As Kevin’s talent as a footballer was noticed, a number of VFL club representatives travelled from Melbourne to meet the young rover.

“I had North Melbourne come and see me,” he said.

“Collingwood also chased my brother Frank, who was two years younger, and wanted us to go there for cricket and footy.”

Despite the offers, Kevin said there was only really one club that he was ever going to play for, with his family’s connection to South Melbourne stemming back generations.

“My grandfather lived three blocks from the South ground, just around the road from a bakery where a lot of the imports from South Melbourne were working,” he said.

“He followed them for years and years and he’d tell stories of all the old champions.

“I listened to the ‘45 grand final on the radio between South and Carlton, ‘The Bloodbath’, then went down to watch a few games South played in ‘52 and ‘53.”

Kevin made his debut for South Melbourne in 1954 and would go on to play more than 50 games up until 1960. Playing in the same team as future Brownlow medallists Ron Clegg, Fred Goldsmith and Bob Skilton, Kevin said it was surreal to be playing alongside players he had idolised growing up.

“It was a dream come true because I was playing with and against guys I had photos of in my scrapbooks, and here I was on the field with them,’ he said.

South Melbourne’s fortunes never reached any great heights during Kevin’s time, with the Bloods finishing in the bottom third of what was then a 12-team competition in every season from 1954 to 1960.

“They just had an aura of invincibility about them.”

“Melbourne (Demons) played in every grand final in the time I was in the VFL,” Kevin said.

“They just had an aura of invincibility about them.”

In his time at South Melbourne, Kevin also had the good fortune of rubbing shoulders with two of the greatest Australian sportsmen of all time, in former VFL footballer and test cricketer of the 1930s Laurie Nash, and world champion billiards player Walter Lindrum. The outspoken Nash, who, when asked who was the greatest footballer he had ever seen, replied, “I see him in the mirror every morning when I shave”, may well have justified this claim when he kicked 18 goals in a state game for Victoria.

Kevin’s time in the VFL also coincided with the career of Essendon’s legendary full forward John Coleman, whom Kevin rates as one of the best players he has ever seen. Unfortunately for

Kevin, he was denied the opportunity to play against Coleman, something he said was “one of the great disappointments”.

“I’d watched him in finals and he was just sensational, and I was looking forward to getting on the same ground as him three weeks before we played, but down he went and buggered his knee,” Kevin said.

“The way he used to fly for marks, the crowds would literally move from end to end just to watch him.”

As Kevin explained, football in the 1950s offered a stark contrast to today’s multimillion-dollar industry, with only one coach managing the team from the boundary line, one umpire controlling the on-field action, and players all working full-time.

“The VFL in those days was more like country footy is now… they say about the game being fast now, but it was still fast enough then because they were all pretty good athletes,” he said.

“The main difference is we only trained two nights a week, and now they’re fully paid professionals who are there every day.”

Kevin said things were a lot more laidback off the field as well.

“You got friendly with a lot of opposition teams because after every game both teams all went back together to the host team’s social club, the umpires and all.”

Although, Kevin said, “It’s fair to say fans in those days were more tribal.”

He recalled a game involving some more-than-passionate Collingwood supporters.

“In a match in 1954 they needed to beat us to get in the finals and we ended up winning,” he said.

“After the game the officials said to us ‘just watch yourself coming off the ground because here come the women’, and they had their umbrellas and they were bloody whacking us!”

The connection to South Melbourne since the club’s relocation to Sydney has remained strong, with Kevin still answering the odd call from supporters.

“Every now and again someone sends me a footy card and I’ve got to sign it and send it back to them, you get them from all over the place,” he said.

“I was there when Sydney won the premiership in 2005 and to see so many people wearing red and white bawling their eyes out was amazing.”

Once his time in the ‘big smoke’ came to an end, Kevin made the life-changing move to Sale in 1961, a place he has called home ever since.

“In my first year at Sale I was cleaned up against Bairnsdale and had a spleen taken out and was in the hospital for 10 days.

“A group of schoolkids at 545 all wrote letters to me, those kids would now be about 60!

“It was the end of an era at Sale, they’d won the premiership in ‘54, ‘55, ‘57 and ‘59, then I came in ‘61 and all those players [that had played in premierships] had gradually disappeared. After I finished playing (due to mounting injuries) I coached juniors for 15 years and was still on the committee. I’ve been involved with the club every year since I’ve been here.

“A lot of work was put into junior sides and those players went onto play in Sale premiership sides in the ‘70s.”

Throughout his time, Kevin also played with some of the greats of Gippsland League football. “Bob Mason in the ruck for Sale, he won two league best-and-fairests. Melbourne chased him and chased him but he was just happy playing in the country,” he said.

“The standard in Latrobe Valley football has always been very good.”

As well as football, Kevin was also an accomplished cricketer, and helped reform the Sale Cricket Club.

“The standard in Latrobe Valley football has always been very good.”

One of the many highlights of his cricketing career came when he played against the touring Indian test team, which came to play at the old Yallourn Oval in the 1960s.

“We were going to play on the turf at Yallourn, which was a lovely ground, but the whole area got flooded,” he said.

“The Indian boys walking around saw the ground alongside it, which was malthoid (synthetic), and said ‘if you can find us some soft shoes, we’ll play you on that’.

“So within half an hour they had all the shoes they wanted.”

Moving into the world of sports media, Kevin has since dabbled in print, radio and photography, although he said his maiden radio performance left him a little worse for wear. “The first program I ever did I turned off all the gear after and said ‘that was shithouse!’”

Since this slight hiccup, he has become a familiar voice on ABC Gippsland, and until recently, listeners would be introduced by voice over every Thursday morning to ‘the one and only Kevin Hogan’, for a half-hour chat about all things happening in local sport. Despite his work on the airwaves, Kevin said his preferred medium was print, and his work as the Gippsland Times sports photographer for more than 50 years has seen him take an estimated 100,000 photos in his time.

“In 1965, David Tulloch, who was then the editor of the Gippsland Times, came up to see me and asked me to start writing on the footy,” he said.

“Then the following year, they didn’t have anyone doing sports photography and David said, ‘We’ve got a camera here, you can be the photographer if you can get a lens for it’, so that’s how it all started.

“The first shots I did were a Sale versus Yallourn game at the Sale Oval in 1966.

His contribution to sport, particularly at Sale Football-Netball Club where he, and his two sons are life members, was formally recognised with the naming of the Kevin Hogan Netball Facility in 2013. Kevin has been a mainstay in netball circles since the sport became a part of the football club in the late 1990s.

“The netball involvement has been one of the best things I’ve done,” he said.

“The families are magnificent, there’s people at Sale that we would never have seen if it wasn’t for netball.” Kevin said it was fulfilling to know that his work on the sporting landscape was appreciated by many, and hoped community clubs would be able to continue to provide places for people to play, compete and socialise.

“Now there’s four football teams, six netball teams, and one day they counted up there were about 80 volunteers.

“It’s been a great journey.”