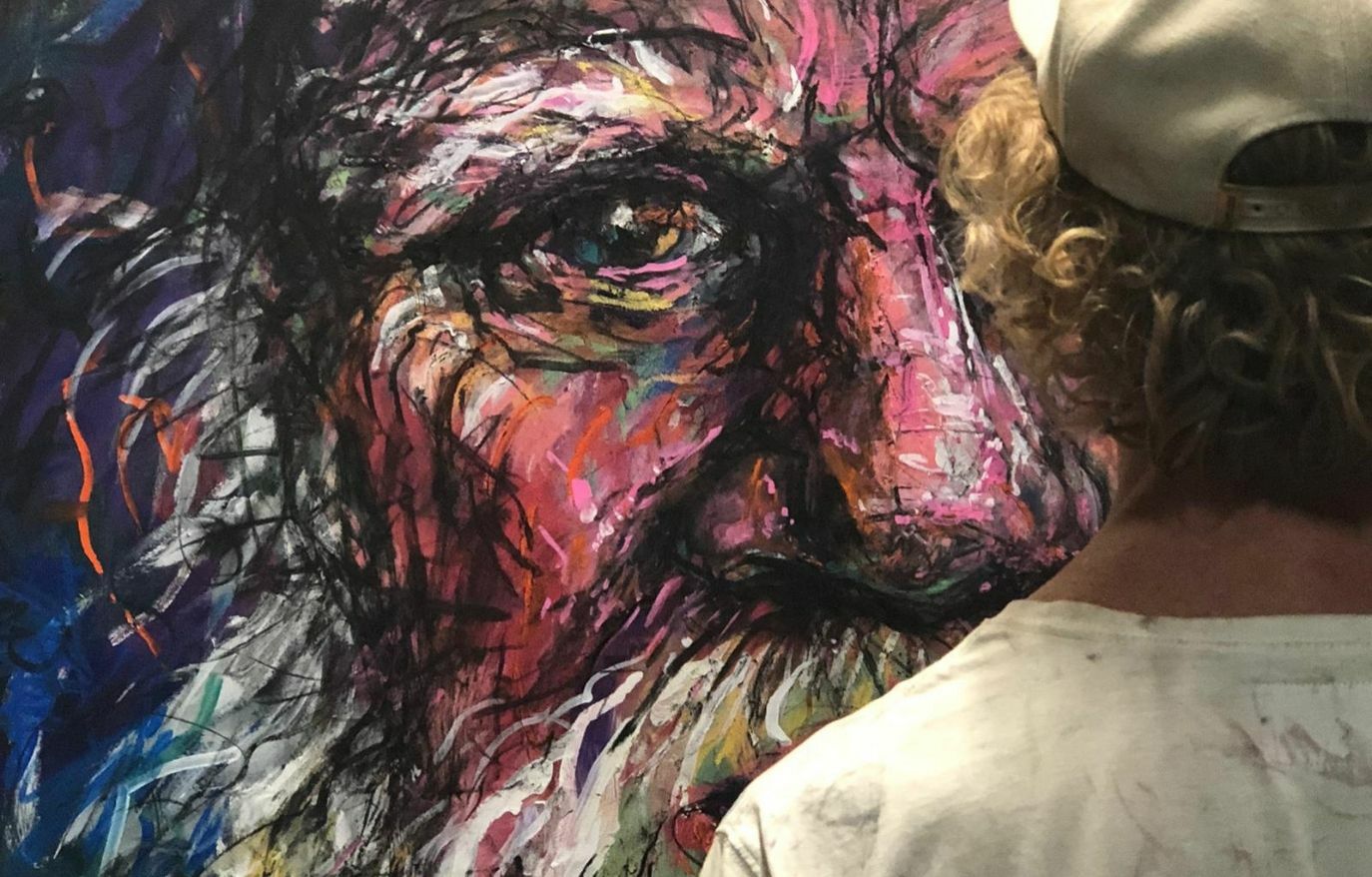 Craig Ruddy's shortlisted portrait of Uncle Bruce Pascoe is a moving portrayal of a man beloved by many in Gippsland and Australia-wide.

Getting to chat to an Archibald Winner is an opportunity that you’re not often provided.

When this publication got rolling, we thought, ‘maybe we could score a lil’ extra chicken salt and a sly bonus dimmie’ and that would be the grand sum of doors opened by being involved with Gippslandia.

Having the pleasure to correspond with 2020 Archibald Prize Finalist and the 2004 Winner, Craig Ruddy and his partner Roberto Meza, has been thoroughly enlightening, enjoyable and largely unexpected. After all, Craig won the Archibald with one of the more controversial works in the art prize’s history, Two Worlds, a beautiful portrait of traditional dancer and actor David Gulpilil. Many famous artists can’t seem to pick up the phone when a community publication calls, but in what is a solid testament to Craig and Roberto, they were generous with their time and honest in their responses.

Craig’s shortlisted portrait of Uncle Bruce Pascoe is a moving portrayal of a man beloved by many in Gippsland and Australia-wide. As you’ll read below, it captures Uncle Bruce at a particularly vulnerable time and serves as a striking reminder of the profound power of a painting.

Craig, when did you decide that Bruce should be your subject for the Archibald, or was it a slowly growing feeling as you read Dark Emu?

My decision was more of a slow burner. I’d initially seen a few interviews with Bruce, which I found extremely inspiring, even prior to reading Dark Emu. Then the aftermath of the devastating summer bushfires, and the fact that I was regenerating my own property, made Bruce’s pointers in Dark Emu even more pertinent. It was a culmination of a few different things for me personally, and for the nation, that cemented my yearning to bring his knowledge and voice further into the limelight.

Was Bruce receptive to the idea of having his portrait painted? What preparatory work did you undertake?

I received an immediate and excellent response from Bruce. He actually had a poster of Two Worlds displayed in his Gippsland home. The fact that Bruce already admired my work and was honoured for me to paint him was such an encouraging start to this journey.

In preparation for painting his portrait, I watched several other TV discussions with Bruce, started reading Dark Emu again and studied many photographs of him to become acquainted with his mannerisms and the things that are said in the silence between speaking. This, for me, is how portraiture can really come alive.

How was the experience of studying Bruce on his farm? How much time did you spend with him? How many sketches/studies did you prepare before embarking on the final painting?

I met with Bruce on his East Gippsland property just before the Covid-19 lockdown. I was there for a couple of days and had two sittings with him. Initially, we did some sketches at the house and then down by the river with the dogs, where I commenced some preliminary studies and took photos and videos of him in his element, while he told me heartbreaking stories of the recent fires that had swept through the property.

My initial concept involved photographing Bruce in the waterhole on his property and using a mirror and black coffee [to create the work]. However, in the hotel room after our first sitting, I started producing a range of colour studies. I continued these the next day at Bruce’s home. This was never the intention, but when the art is flowing I try not to get in the way of it. 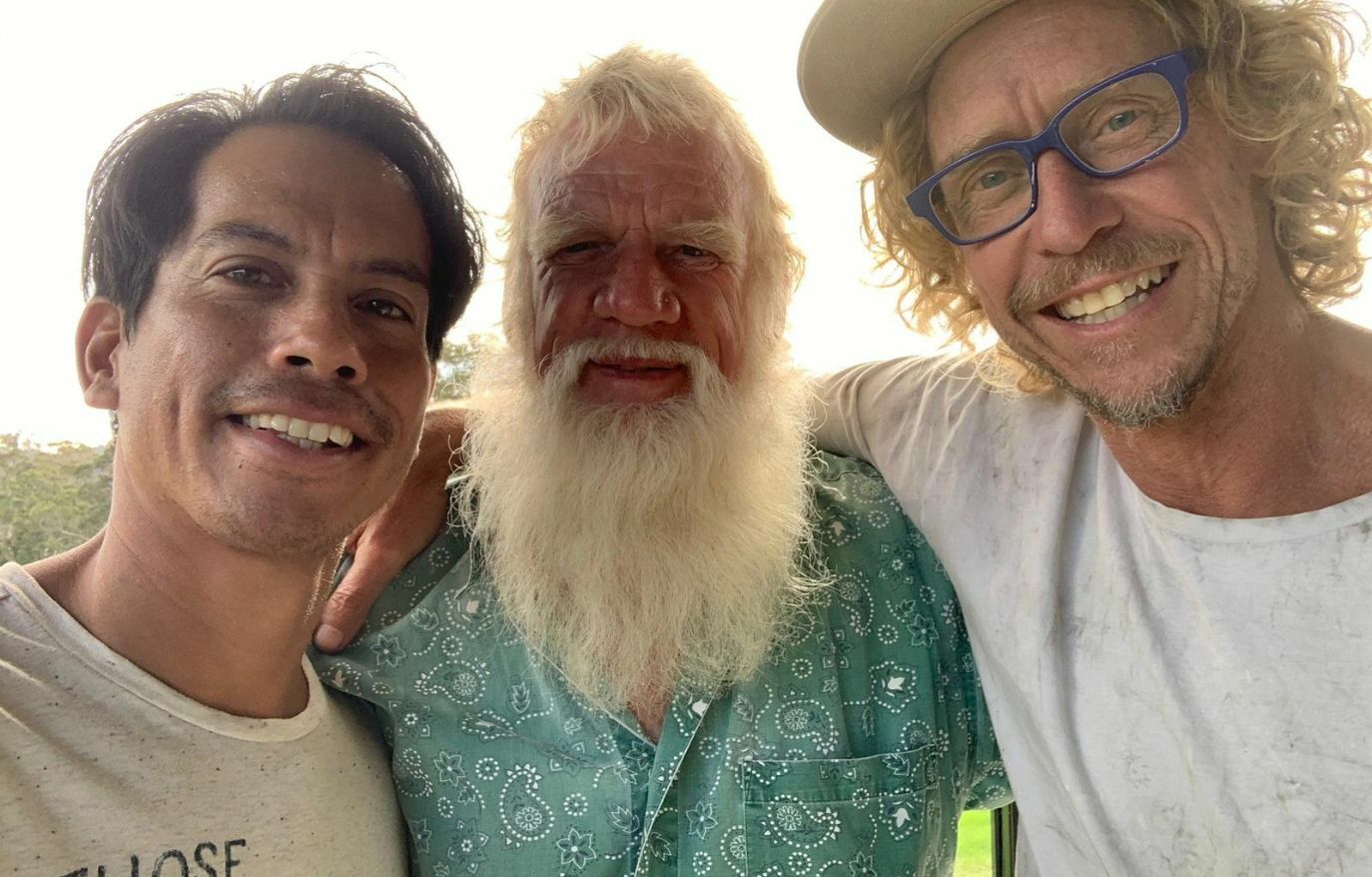 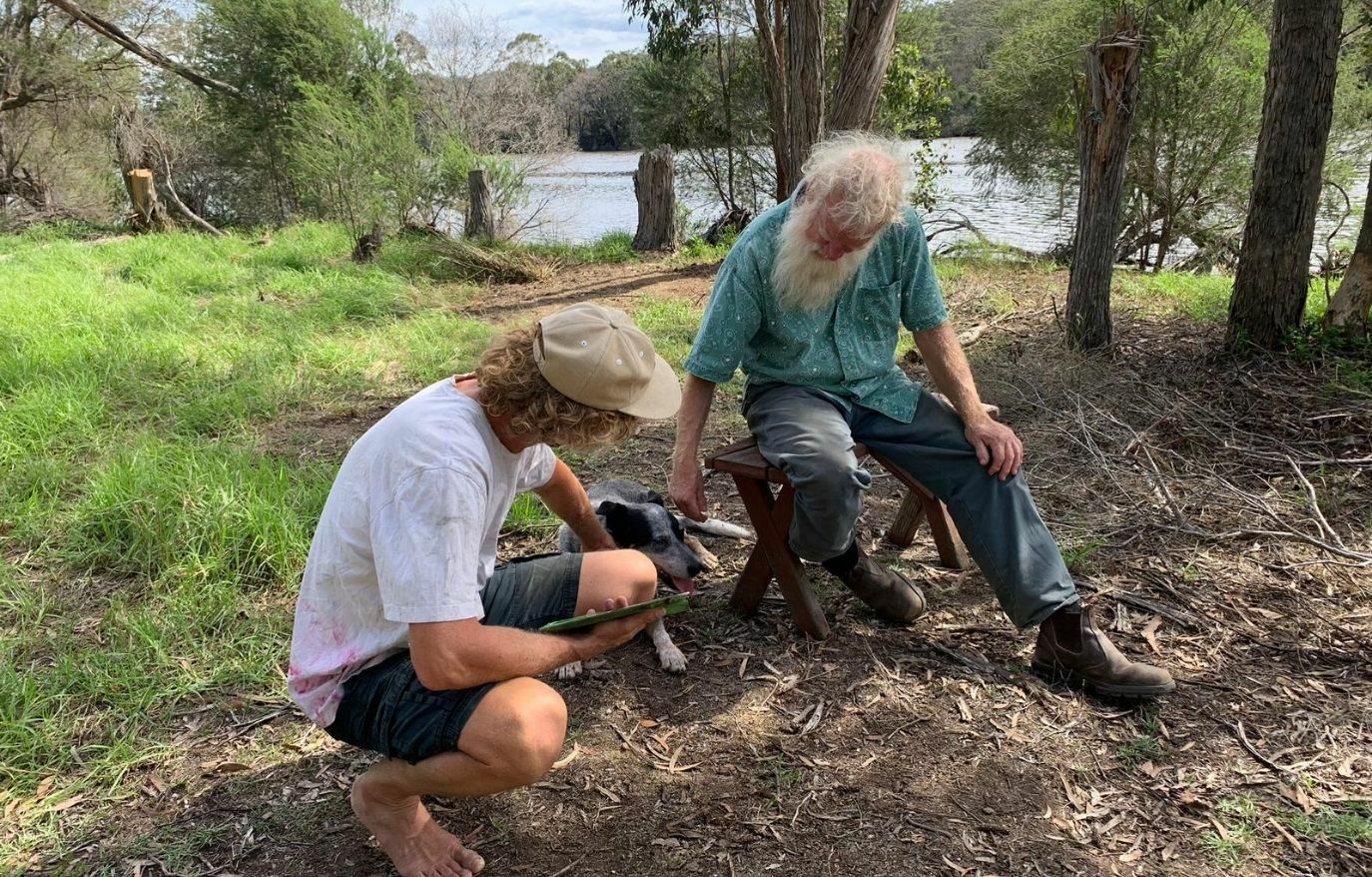 We imagine portraiture can be a deeply personal experience for both parties. What aspects of Bruce did you feel needed to be represented through your piece?

Portraiture is definitely a unique experience for the subject as they are encouraged to be still and fully present with themselves, whilst being intently observed by another person — which is quite rare in our fast-paced daily lives. The trust that the subject places in the artist to view them in such a vulnerable state also comes with great responsibility. It’s such a delicate and beautiful dance.

After reading Bruce’s book and listening to his eloquent speeches, I had a preconception of him as an educated and open-minded academic, dedicated to sharing the untold truth of Australia’s history and First People. All of this was accurate, but it was his resilience, gentility and empathy that I was called to represent. Our shared humanity was one of the greatest messages that I wanted to communicate through the work. Before me stood a man who’d suffered such loss, after the bushfires ravaged his property, took the life of his close friend and neighbour, and instigated the removal of sacred ‘mother trees’ which he and a small group had been fighting for years to protect. Yet Bruce presented as an unapologetically raw and authentic soul — a rare trait that is so important, especially for today’s men, to be exposed to.

How much time did the final portrait take and what materials did you use?

About 20 days, right up until the deadline! The portrait is mixed media on canvas. I used a combination of acrylic paint, oil paint and oil stick in hyperreal colours to signify the diverse undertones, cultures and knowledge systems in this country and pulled them all together with threads of charcoal derived from the ancient wisdom and spirit of the fire. Finally, I completed the work using varnish.

What has been Bruce’s response to your portrait?

Without my knowledge, my partner sent him a sneaky photo of the work in its earlier stages, and I think he was a bit nervous to say the least! However, as it reached completion Bruce was really excited and very proud that it made the cut amongst the finalists.

There is a lot of pink in the skin tones of your portrait of Bruce. Given the controversy surrounding Bruce’s Aboriginality, maybe even as you were planning this work, was this a conscious choice or did you just paint what your eyes saw?

The controversy flared up just after we locked in the date to meet, so it was at the front of my mind. I always follow my intuition and I wanted to paint what my eyes saw and express exactly what I felt in his presence. Pink kept coming to the forefront with all the studies. Although it does represent his dominant skin tone, I think that it was more a reflection of his gentle, sensitive and vulnerable nature that was overtly present at the time of our meeting, given the loss and trauma he’d experienced after the fires and over external players trying to dictate his identity for him.

Can you provide any insights into your next project?

I’m currently finalising the studies that were created when I met with Bruce and in the lead-up to the major work. I’ll be exhibiting them in Murwillumbah in conjunction with the Archibald touring exhibition that will be visiting the Tweed Regional Gallery in February 2021. Bruce will be flying up to stay with me for a few days and we’ll both be talking at the Tweed Regional Gallery Sunday Sessions. 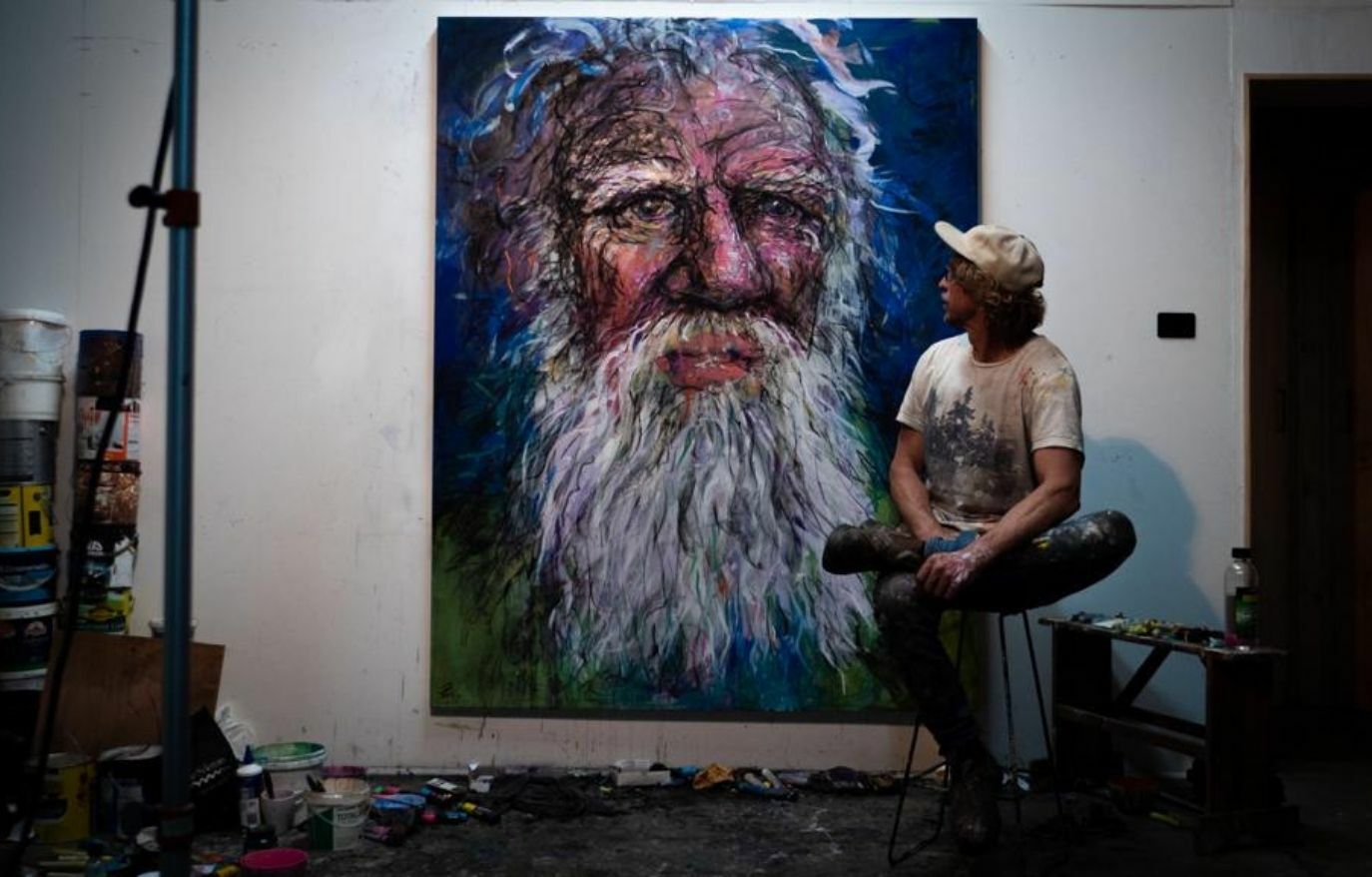 As we go to print, the Gippsland Art Gallery has announced that it has been named by the Art Gallery of NSW as the sole Victorian host venue for the 2021 Archibald Prize Regional Tour. The Gallery will host the prestigious prize for portraiture, celebrating its centenary year, from October 8 to November 21, 2021.