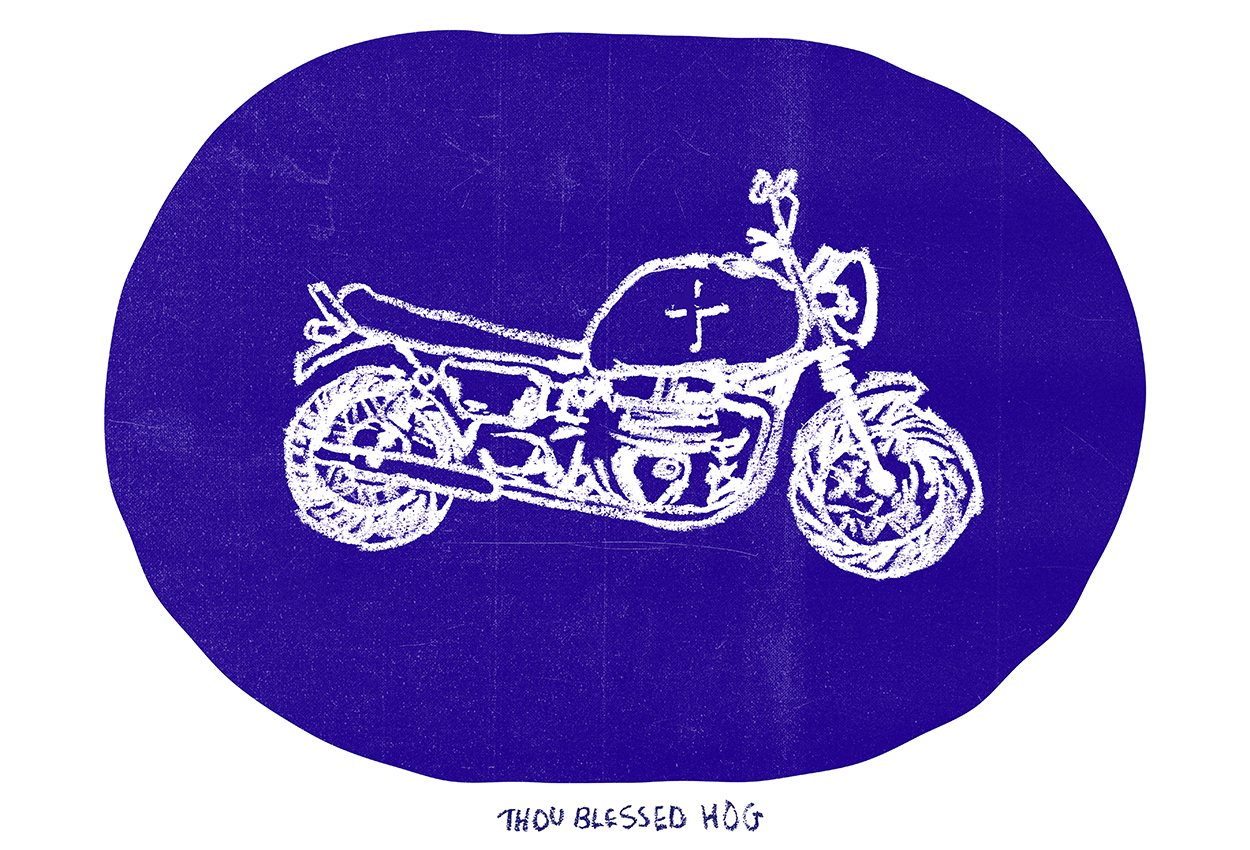 The idea struck Marcel Widmer before he fell asleep, ‘Why don’t I bring the ‘Blessing of the Bikes’ to Australia?’.

The idea struck Marcel Widmer just before he fell asleep, ‘Why don’t I bring the ‘Blessing of the Bikes’ to Australia?’. A mere two months later, Marcel and his wife, Sabine, were welcoming almost 1,000 motorcycles to Mirboo North — a dramatic increase on the 150 bikes they’d initially anticipated.
—

Swiss-born Marcel and Sabine, who originally hails from Germany, always hoped to connect their passions with a business venture, and it was through their motorcycle-themed cafe, Inline4Cafe opened in the charming village of Mirboo North that they were finally able to achieve this. After four years of trade, Inline4Cafe closed its doors on 31st of December, 2017, and is now getting an oil change and fine-tuning to be re-opened with all cylinders firing in a location closer to Phillip Island.

Marcel had first experienced a ‘blessing’ on the Simplon Pass, a 2,000 m high mountain pass between the Pennine Alps and the Lepontine Alps in Switzerland. After launching Inline4Cafe, the Widmer’s were spinning the tyres on a concept that could attract more people to their corner of South Gippsland. As Marcel explains, “No one knew about this little town. I needed ideas to put the name of this town out to the world, with the hope of a lot of riders coming and seeing our coffee shop.

The passion for bikes runs deep. Coming from a ‘motorcycle family’, Marcel was on a bike for the first time as a five-year-old and hasn’t been without one in the 45 years since; “I’d feel naked without a motorcycle. It’s part of my life”. Sabine caught the ‘bug’ after opening the cafe and she now rides a Yamaha MT07, while Marcel tears around on a Honda CBR1000RR Sp, which he professes is his ‘dream bike’.

The ‘Blessing Of The Bikes’ is a celebration of camaraderie shared in the motorcycle community. An integral component of the ceremony is dedicated to the riders paying their respects to those that have fallen over the past year. The riders take the stage to tell their story about the person they’ve lost to the motorcycle brethren that are gathered with them. Marcel and Sabine believe that this is the most important part of the ‘Blessing’ as it helps the riders overcome their loss.

Given that this is one of Australia’s largest motorbike events, it’s also an incredible opportunity to check out thousands of beautifully maintained motorcycles as they line the streets of the new venue, San Remo.

The Widmer’s were overwhelmed with support when they first suggested shifting the ‘Blessing’ to San Remo, “From the footy club, to schools and local businesses, just about everyone put their hands up to help make this a great event”, exclaims Marcel. Not only were the local community groups on board, but the San Remo District Tourism & Business Association and Bass Coast Shire were a strong force behind the event’s success. Marcel continues, “I don’t think you could ask for a better Shire. They love motorcycles, like us, and know, from years of experience, that the motorcycle community is a very well behaved crowd”.

Welcoming all these riders to the region benefits the local accommodation venues, businesses, sports clubs, schools and restaurants, as one of the event’s policies is to hire outside food traders, to keep all the money spent on food in the town. Marcel believes that, “Motorcycle riders are very loyal. If you look after them, they’ll come back during the year and will spend more money”.

Marcel loves the fact that the event has brought riders together, even after they’ve lost contact for many years. He also enjoys, “See father’s roll up with their kids on the back of their bikes. As well as all types of riders and ages coming together for the same reason. Feeling the strong brotherhood.”

The ‘Blessing Of The Bikes’ is another terrific example of ‘new’ Gippslanders introducing cool traditions from their homeland to our region, then having them heartily embraced by the locals and the benefits flowing throughout the community.

Circle the 20th of October in your calendar now if you’d like to be part of one of the biggest motorcycle gatherings in Australia and experience what the motorcycle brotherhood is all about it.