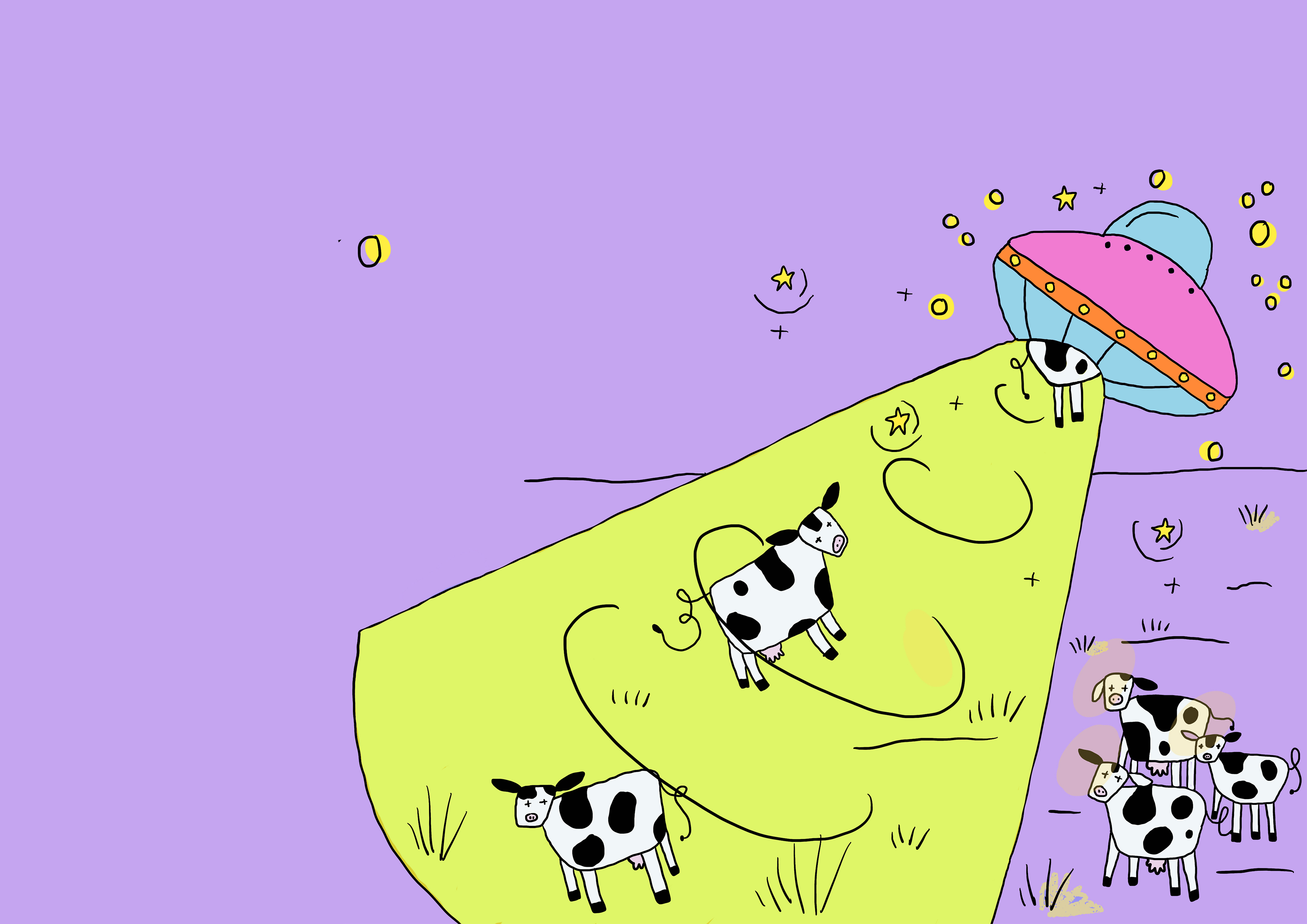 Whether you are open-minded or skeptical, the mystery surrounding if aliens have ever visited our planet abducts our imaginations.

“Then I saw this thing, about 10 to 15 feet high with a row of lights, like portholes…”

This is what Rosedale farm worker George Blackwell said to the Gippsland Times newspaper when the UFO sighting made front-page news on October 1, 1980.

Picture one of those Central Gippsland early ams, where the sky is bigger than the plains. The cows are going mental, mooing and kicking up their heels. They’ve got that panicked roll-back of the eyes. It’s enough of a racket to wake up George. Enough of a racket to get him out of bed and onto his motorbike. What the hell is going on out there?

Whirring, lights in the dark, a disc-shaped vehicle... then a flash. A blast. George is knocked to the ground.

“So there was physical evidence afterwards,” says Tegan Dawson. Tegan lives in Newborough, and has a podcast called Haunted Hills, which is uncovering Gippsland mysteries. Tegan has studied the Rosedale UFO case and says, “it turns out a lady nearby saw similar lights the same night”.

Evidence still exists. The owner of the White Acres cattle property is photographed alongside George Blackwell on the cover of the Gippsland Times. He’s pointing to a large circular burn mark in his paddock.

Also, a water tank the UFO hovered above was contorted and empty the next day. Several witnesses verify this.

This Rosedale UFO experience has stayed in global UFO collective-knowledge as one of the most compelling and hard-to-dismiss cases… Of All Time! It’s ranked in the Top Ten UFO cases on the Mysterious Universe website and is featured on the popular American podcast website How Stuff Works.

Wherever you slide on the spectrum between open-minded and skeptical, the mystery surrounding whether aliens have ever visited our planet abducts our imaginations.

Because, what if? Could it be? The circular nature of our agnostic logic system means you can’t ever entirely rule anything out for sure.

So a year later, near Briagolong this time, what could potentially be the same UFO is spotted. Water goes missing again and identical burn marks are found in a paddock.

It turns out Gippsland is quite the popular destination for UFOs. Hey, if they do exist, at least we know they have good taste. A website called UFO Hunters maps sightings from across the world. According to this website, there’ve been numerous sightings in Sale, Maffra, Stratford and Lakes Entrance in the last few years alone, with the most recent Gippsland UFO experience mapped in January this year from Kalimna.

Tegan says there are many unexplained cases of UFO sightings. “I can’t tell you these stories exactly, because they’re not my stories to tell, but people have told me they’ve seen lights behaving strangely,” and she begins naming towns from across Gippsland.

Your next Gippslander is more passionate about four-wheel driving than aliens. But Warragul’s Marcus Hiam experienced more than a bumpy road when he camped out at Wonnangatta. “About 25 of us were sitting ‘round the campfire at night talking and watching satellites go over. Have you ever done that? Just watch the sky?

“We couldn’t believe it. We went ‘Yeah right. Did we really see that?’ We still talk about it. We were camping down the road from Harry Smith’s hut. He was one of the people who found the bodies in the unsolved Wonnangatta murders (1918). I’m pretty open to something being out there. By definition, a UFO is an ‘unidentified flying object’ and this was hard to explain. The behaviour of this thing was just bizarre.”

Dr David Waldron is a senior lecturer in history at Federation University. David has a personal and professional passion for the folklore of Gippsland. He’s written about the Gippsland Panther and has researched patterns of UFO sightings throughout history, specifically how they reflect culture and technology at the time.

“There’s a long history of UFO sightings in Gippsland, and throughout the world. In the 1890s we called them Mystery Airships, [and then] during World War Two, we started calling them Foo Fighters. They became ‘flying saucers’ after the Roswell Incident (1947) and now they’re UFOs.”

Dr Waldron says, “Every day thousands of people see objects in the sky. Some take them as symbols of divine intervention, some as an astronomical phenomenon. Others will go and create a new religious movement. In one sense, how people interpret these experiences is perhaps more interesting than what they may objectively represent”.

Tegan says she spends a lot of time watching the sky. “I keep looking, I just haven’t seen it yet. I believe people believe they’ve seen these things and why am I not lucky enough to have seen myself?!”

So what do you reckon? George Blackwell, who was caught up in the middle of the Rosedale mystery in 1980, ended up being run out of town. He couldn’t handle the taunts anymore. You can imagine the kinds of things people would say, right?

But, do you believe?