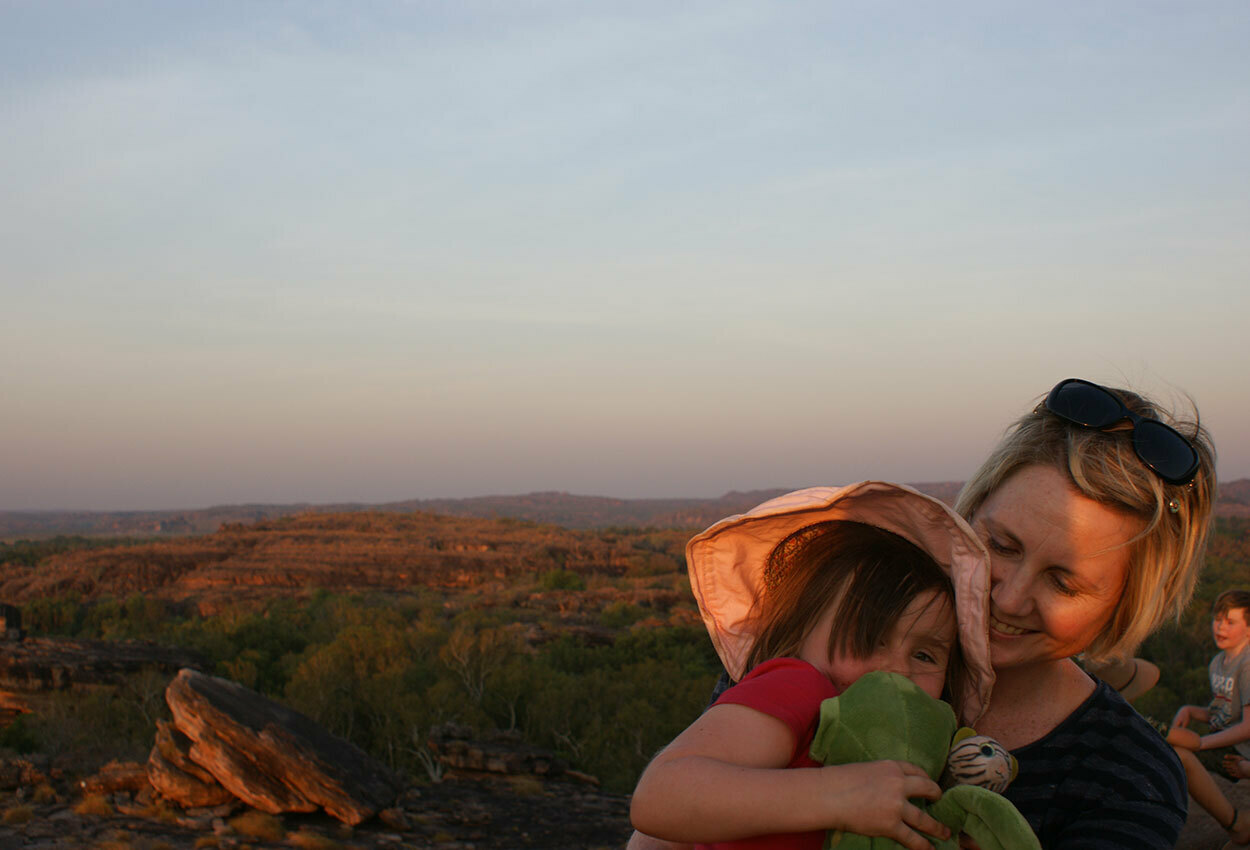 The Misadventures of the Travelling Quirkus.

A tale worth sharing of the everyday interactions between five personalities living in the confines of a caravan.

When author Karen Casey and her family set off on an outback road trip, she never expected it would become a story worthy of a book. But the trials faced by this Gippsland family, and the everyday interactions between five personalities living in the confines of a caravan, quickly made it a tale worth sharing.
—

The following is an excerpt from The Misadventures of the Travelling Quirkus. Karen’s husband is known as ‘The Ideas Man’.

The Ideas Man is holding up his hand, fingers spread.

He is excited. And he is begging. The Ideas Man had casually swung off the road beside the first mammoth river in Kakadu National Park. I thought it was a toilet stop, but it soon became apparent this was a premeditated plan to fish for barramundi without the kids. The rod was already rigged up with a large, expensive lure bought in Melbourne long before our trip started.

The kids and I were cool with it. We were all absorbed in books or tech time and… The Ideas Man is back at the car. I look past him for the rod as he climbs silently back in.

He shakes his head. He did go. He cast. Now the well-travelled lure is gone.

‘First cast,” he says. He still can’t believe it. I try to cover my snort-laugh.

The Ideas Man explains how the line snagged on the end of the rod and snapped off, lure and all, landing in the middle of the river.

“It’s as if I just said ‘bless thy river’ and threw the thing in. Bless you! Have this! There you go!”

The Ideas Man is still muttering about the blessing of the river several hours later. We are at Cahills Crossing now, on the border of Arnhem Land. He can see fish stirring up water near the bank, but so can the crocodiles. There are more than 10,000 crocodiles in this park. That’s a tenth of all the crocodiles in the Northern Territory in this one little nook.

Crocodiles have always made me nervous. The first time The Ideas Man and I travelled into croc territory I trawled the Internet, books and documentaries trying to establish if crocodiles considered humans to be food or whether they attacked because they mistook us for cattle. I’m not sure what comfort I thought I would get from my research. The information dispelled every myth that previously reassured me. Do saltwater crocodiles inhabit the inland fresh waters of the lagoons and waterfalls we’re visiting, for instance? Yes. Yes, they do. Given their name I assumed saltwater crocodiles lived only in salt water. But these prehistoric killers have been found more than 200 km from the coast in freshwater estuaries. And, here’s the clincher—they can get up waterfalls! They may be prehistoric, but they’re not stupid. They can find their way around vertical obstacles and lug their massive, predatory bodies to pools upstream.

At Cahills Crossing, The Ideas Man thankfully heeds the warning signs and instead watches the influx of crocodiles as the tide rises. But fishing is still on his mind. The next morning the car takes a suspicious detour upstream.

He has a pre-rigged rod in hand again. He pauses only to throw me another five-minute hand signal and to ask a ranger if there are barramundi about.

“Too many,” the ranger says. “The crocs can’t even eat them all. You want to catch barra, you need to sing to the river. See the fish. Watch the tide, watch the water.”

The Ideas Man is excited. He embraces the spiritual advice and scampers away, inspired by the promise of excess barramundi. But here he is back at the car again. I look at his rod and notice the lure missing.

“You’re kidding. Really?” There is no hiding the snort-laugh this time.

The Ideas Man doesn’t answer at first. He quietly puts his rod away and gets back behind the wheel, staring at his hands in disbelief.

“I sang to the river. I pictured the fish chasing the lure!”

A few casts and the lure was inhaled by a tree. The Ideas Man is shaking his head. He is looking at his hands as if they’ve deceived him.

“I don’t understand. I sang to the river. I pictured it.”

I can’t take it anymore. I’m laughing out loud now. I need him to stop looking like a bully took his lollipop. I find a potential solution in the brochure racks at the information office of the caravan park. I leave the potential solution casually lying around on the driver’s seat of the car. An hour or so later I hear The Ideas Man talking to himself.

He found it. Happy dance. The Ideas Man goes to the office under the guise of inquiring about waterfalls. He returns with news there is a spot left on the fishing boat today. Three hours with a local guide, rods and lures provided.

At last, The Ideas Man reigns. He returns from the fishing charter with a decent size barramundi and a smile to match. One would think the catch would buy a few hours calm. A little chit chat about the ‘experience’. But it turns out the experience has only sparked more enthusiasm. The following day The Ideas Man makes an unexpected turn as we leave camp. There is a billabong just down the road. The kids and I watch as he clambers along a tree trunk that hangs over the water. I miss everything thereafter as he returns a minute later with another lure missing. This time I am far too busy pointing at him and laughing to ask where the lure went.

—
The Misadventures of the Travelling Quirkus is available online and in the following Gippsland stores: Need2Read, Warragul; Variety Bookroom, Moe; Atrium Bookshop/Newspower, Morwell. You can also ask your local store to order it in using their IngramSpark account.