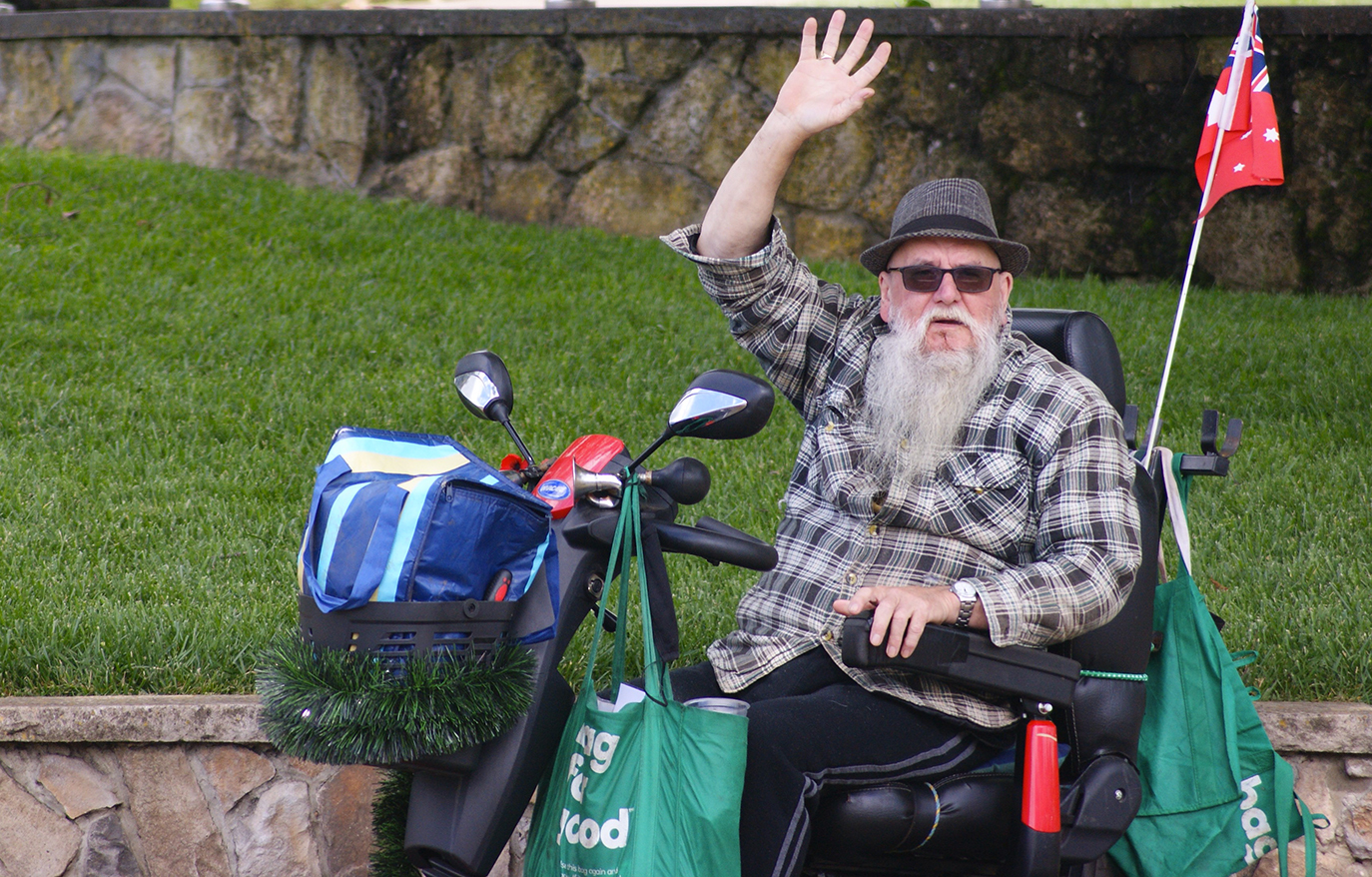 The Hart of Hope Street.

Gary Hart has been turning up on Hope Street, rousing hurrahs and cheerful toots: inspiring kindness in others without realising.

Gary Hart fishes about in a shopping bag, one of many slung over the handles of his mobility scooter. He produces a spiral-bound notebook with his name handwritten in rainbow block lettering on the cover. The notebook is tattered. The colours in ‘Gary’ have bled and faded, as if the book has been pulled out repeatedly in the rain. This is a cherished notebook: a gift littered with photos and messages of love.

It is proof that Gary’s message is making an impact.

"I sort of thought ‘wow, isn’t that great: I brought that man joy'."

Suffering terminal brain tumours and with difficulty speaking and walking, Gary has something simple to offer during a difficult time around the world: joy.

Parked appropriately at the Hope Street roundabout in busy Drouin, West Gippsland, Gary has his arm in the air, up high so he is seen, and he waves to passing cars. Come Christmas, Gary will do this in a Santa suit. He’ll string tinsel over his scooter and call it Rudolph for a while. Given he sports a wispy, white beard, children have always called him Santa anyway.

“In the beginning they would think ‘what is this creep up to?’,” Gary, 62, said, flicking his hand in the air to show me how it used to be. “There was a guy here who used to wave back real quick, just like that. Now, it’s a big wave and I sort of thought ‘wow, isn’t that great: I brought that man joy.’”

Gary has been turning up on Hope Street for years, rousing hurrahs and cheerful toots: inspiring kindness in others without realising. While I talk to Gary in Memorial Park, he fields handshakes and 'hey-Garys' from people who know him or know of him and strangers who just want to thank him for making them smile. If you stop to talk to Gary, he’ll likely call you sweetheart but he’ll ask if that’s okay. Shake his hand and you might get a gentleman’s kiss on the back of yours: a thank you for taking the time to stop and talk.

For this, Gary has attracted a following of people who throw parties in his honour and who rally together, fresh out of the 2020 lockdown, to make sure he has a new Santa suit by Christmas. When the community got wind that Gary needed to move house, a call went out on social media to help him shift. And if he hasn’t been seen for a while, because sometimes Gary needs to rest, the community social pages run hot with people asking where he is and if he’s okay.

“The very first time I met Gary he was dressed up as Father Christmas,” said Drouin local Brodie Smythe. “He and I took it slow to learn how to understand one another. I am on the autism spectrum, so it wasn’t always easy to communicate effectively due to how I spoke. We’d talk about all kinds of things: the weather, cars, he’d listen to me ramble about technology. Gary, on his good days, when he was more able-bodied, actually taught me how to drive.”

Another man approaches our picnic table now, introducing himself as Brett Robert. Brett gifted Gary the Australian flag that flaps like a tail on the back of his scooter. Gary recognises Brett but in his usual way, he pulls out his laminated A4 posters, which explain that he has tumours affecting his speech, assuring people he isn’t drunk. Brett already has one but Gary gives it to him anyway.

“It’s an updated one,” Gary said, and I can see this is true: there is an extended version of the poem a local woman wrote for him on this one. Gary waves a finger at the poster. He’s going to say his usual thing, the thing we all expect, the thing that will still give us a laugh. “Daryl Kerrigan from The Castle used to say that anything special goes straight to the pool room. That don’t need a pool room, you can put that on your fridge.”

“He’s just a beautiful spirit to have in the community,” Brett lets me know before he moves on.

Gary was diagnosed with multiple brain tumours when he was around thirty-five years old. It is hard for him to remember precisely because the condition has taken its toll. He is an optimist, mostly, but Gary makes no claim to have escaped the mental impact of his diagnosis. No one could. A mechanic and father of two at the time, Gary lost his energy first, then his ability to work. He is estranged from his family. More than once, doctors told him he would soon die.

“The neurologist said, ‘You have even more black shadows over your brain so you better start preparing’,” Gary says of the news his condition was terminal. “I said, ‘What? Am I going on a holiday?’”

Gary shrugs. That was almost three years ago now.

“As they say, shit happens. This is just another stepping stone in my journey. Back when I was (first) diagnosed, I was living a good life. I was able to come home and see my girls. As a mechanic, I had lots and lots of jobs: heavy vehicles, and transportation.

“After that (diagnosis) I was slowing down heaps. I couldn’t walk. I had trouble talking. I adapted with solitude.”

For a time, perhaps still now, Gary was embarrassed about his speech, feeling the need to explain himself if people would listen.

“I’ll be talking to people and I can see their face,” he said. “They’re thinking ‘what did he just bloody say?’ I can hear it clearly but people can’t. They think ‘this guy is pissed’. Before I had my scooter I had a walking stick. I would get up and I would stagger all over the joint. If people don’t know, they assume the worst.”

Gary is proud to say he doesn’t drink or smoke at all, though he confesses to being a bit of a rebel as a kid. Born in Beaumaris, he spent his early childhood on the opposite side of Melbourne in Thornton. In a school of fifty students, he was one of the cheeky kids, the distracted boy sitting by the window, staring out.

“We got an old water tank and we used to roll it around the school ground,” Gary says. “Not very wise. Also, we built a cubby in the firewood room. If it had collapsed, we would have been killed! But we were country kids. Indestructible. I remember catching the junket to school – it was just like a bus – we would throw stones at the horse so we could get home quickly, but on the way to school we didn’t mind going slow. The old horse remembered everything and would go over all the bumps in the road. I’m sure he had a smile on his face.”

As a teenager, Gary left Thornton, returning to his original bayside haunt to learn his trade at Aspendale Technical School. They were rough years, he says. Lots of fights. After working for a time in Braeside, his country upbringing enticed him back to the rural lifestyle in Drouin, where he has been since 1990 or thereabouts.

Gary reaches for that notebook again, flicking through the pages.

Our lives are all the better for having met you, reads one message.

Thank you for bringing a smile to all those who cross your path, another says.

Thank you for giving our dog Scarlett a treat even though she growled at you.

He finds the photo he was looking for. The photo is of him in Drouin Civic Park, surrounded by people: families, motorcyclists, police. A schoolboy too, so inspired by Gary’s story, by the way he just keeps turning up, that he learnt a whole new set of skills to build a wall hanging almost as big as he is. It says Open your heart and wave.

Gary taps a finger over this photo.

“Because everyone is in it?” I ask.

“Yes. I sort of think everybody is getting behind me. They all know. Their understanding of me is fantastic. Waving to the community is giving me so much joy. I would be most happy to give people hope. When all odds are against you, you are able to make people smile. I’ll just keep on keeping on.”

To enjoy more of Karen's writing - including her memoir, The Misadventures of the Travelling Quirkus - and learn of the farming charity her children’s
books support, please visit karencaseyauthor.com.