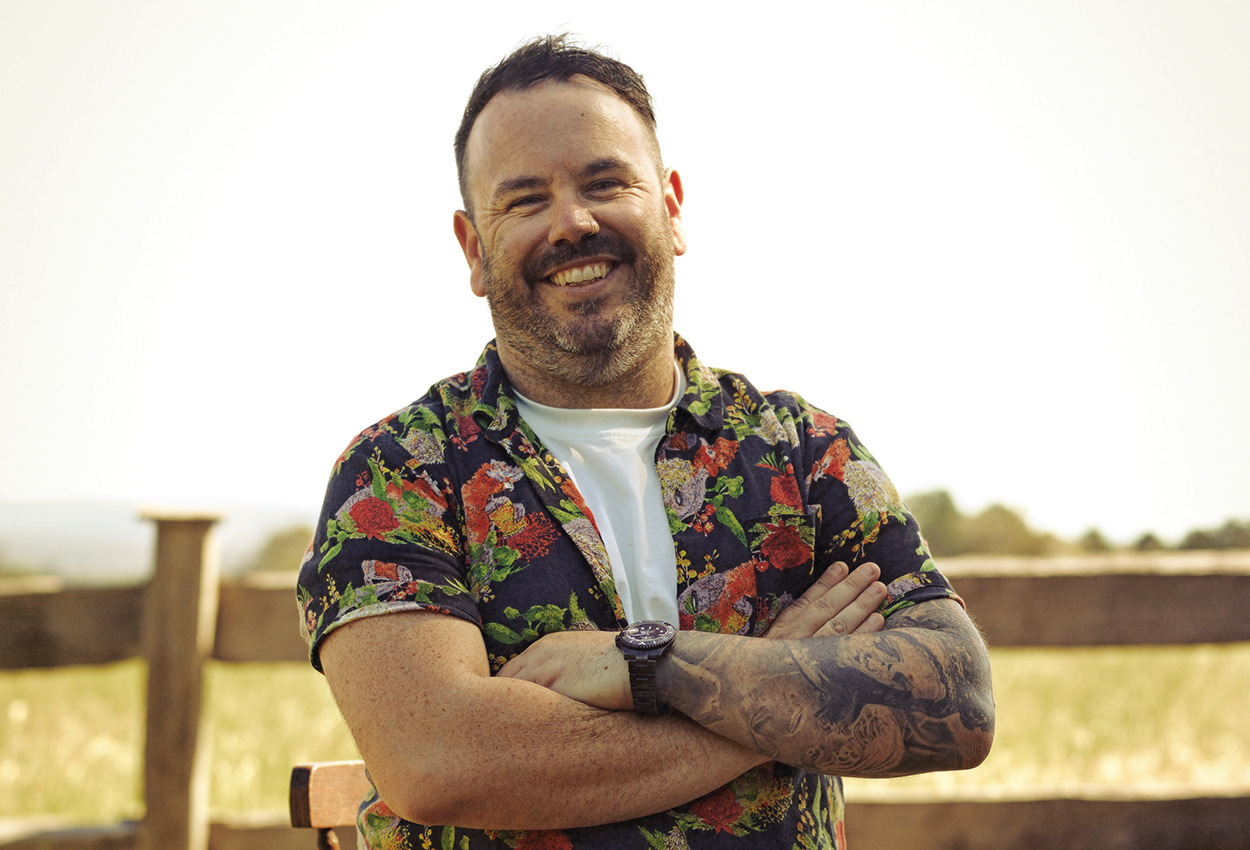 The escape from hellʼs kitchen.

Dave Stewart's love for food began with his Grandmother. Here he opens up about the rollercoaster of living.

My love for food began with my Grandmother. My grandparents, Ian and Barbara Cain, were living on a farm out the back of Yinnar. As a youngster, I’d be playing in the vegetable patches and orchards, planting seeds with my Grandfather and watching them grow - constantly learning about the landscape and seasonality. I couldn’t understand it at the time, but it was already moulding my career as a chef - creating a focus to keep my food as sustainable as possible while using local produce where I could. This is before it was a trend.
—

My Grandmother taught me how to respect produce for what it is, and to think about how we utilise produce to the best of its ability. “Mother Nature is the true artist…”, is a quote attributed to English chef, Marco Pierre White. I remember my Grandmother saying this too. I’ve never forgotten it. It sums up my philosophy in the kitchen, and to pay respect to my Grandmother, and the role she played in my life, I have her name on all of my jackets. She is my hero, and when I’m cooking it is all for her.

After leaving school in 1999, I headed to Melbourne and began my professional cheffing journey. I landed a job in St Kilda, at a place called, ‘No.1 Fitzroy Street’ with the help of my brother, James. It was owned by Chris Lucas of the Lucas Group at the time and featured fine dining upstairs. From there I headed to ‘Circa’ for a short stint to work for chef Michael Lambie. I then worked at Hilton On The Park, that was run by Swiss-Italian chef Stefano Veralio and German chef Frank Burger. This was a big learning curve for me, as previously I’d always cooked for relatively small numbers, say 100 or so covers. At Hilton On The Park, I moved into massive numbers – in excess of 500 people and they had to be prepared to a fairly high standard. It was at this point that I began losing my passion a little and headed to South Bank to work around the Arts Centre.

I formed a great relationship with Nick Frangoulis, one of Victoria’s best seafood distributors, and Chris Moraitis, who were opening a restaurant called ‘Tender Trap’. I ran that group for nearly 10 years and had some great opportunities. I was able to team up with some producers; many of who were from Gippsland and were producing great cheese, beef, seafood and more. I really wore my origins on my sleeve; pushing Gippsland produce as much as I possibly could. I can’t even begin to list the Gippsland wines and winemakers we supported. It was an amazing part of my career, that at such a young age I was running the kitchen. I devoted myself to that kitchen, giving it absolutely everything, to the point where I had no more to give. So we parted ways.

I took 12 months off cooking altogether. I was totally burnt out. This brought on some pretty dark days; feeling lost after giving up something I loved so much. I was was numb, had a lot of anxiety and took a lot of drugs in a spiral of self-destruction.

I took on some new projects - big ones too – including ‘The Vincent’, one of Albert Park grandest historic hotels, which was undergoing a full ground-up restoration. But I was working with a group that had a such an opposite view of what I believe in. This working relationship was always going to end, and this made me not only lose passion, but it literally broke me as a person. My whole world was like living in a jail. It was a fucking hell. It made me question people and the purpose of life. I’ve never felt so alone. It was the love from my family; notably my brother, James, and his business partner, Bjorn, who helped me through this time.

They were starting a new business and I worked with them for a short period. They taught me about life again and gave me confidence. Afterwards, I teamed up with my best mate Cameron Wilson and his sister Jane. I was so focused and on a mission to do what I really wanted in the kitchen. I wanted to create a place for the people - without the bullshit. It’d be fun and really fucking good. Like coming to visit me at my own house. It’s a café with restaurant service for real people, who care about our industry, and we nailed it with the ‘Ascot Food Store’.

It’s a place where I can present everything I’ve learned in my career. I have nothing to lose. Opening the café was the happiest time of my life. I get to work with a lot of great producers from Gippsland again. While working with Ben Evans from Saint David Dairy, who are sourcing Gippsland milk, we became pretty close and started working on butter, crème fraiche, yoghurt - you name it. I was ringing him every day, discussing what we could do next. We’ve developed some great products that are used in some of the best restaurants in the world.

I remember when Heston (Blumenthal) ate at the Food Store – he loved the dairy products; from the milk through to the yoghurt. He said he had to use it, and I was like, ‘Fuck this is Gippsland and Heston wants to use it!’. It was an amazing feeling to see someone like him, a true gentleman, represent us. These moments remind me of home, and this was the challenge I needed – showcasing Gippsland’s products in a restaurant I’m proud of.

This brings a strong sense of responsibility, something that I learnt working with Nick. I’m still very driven, even as a more mature chef. I’m learning how to be a businessman, which also has its downfalls, sacrifices and resulted in a marriage breakdown. Yet now, I have all of my friends by my side. People like Shane Delia, Raymond Capaldi, Robert Mckay, William Johnstone, Cameron and Jane Wilson. It’s these friends, my family and, most importantly, my staff who now helped me through hard times. I’ve also been fortunate to have an adopted sister, Jane, who has been there for me every day – making me accountable. She held it together, helped me grow and kept the business pushing forward, as she understands me and how I work.

As the result of a three and a half year battle, we’ve recently received a liquor licence, and have also welcomed new owners, Shaun Hampson and Megan Gale, as Cameron’s moved onto a different direction. This is exciting, and we’re planning a renovation and a new life for the Ascot Food Store.

Gippsland has a very special place in my heart. It always will. It’s home, in more ways than just a location. It’s by far the best representation of what Victoria offers and the high quality produce available in the region is more diverse than another area. I couldn’t be more proud of where I’m from and how I grew up. I just wish I could show my Grandmother, Barbara Cain.