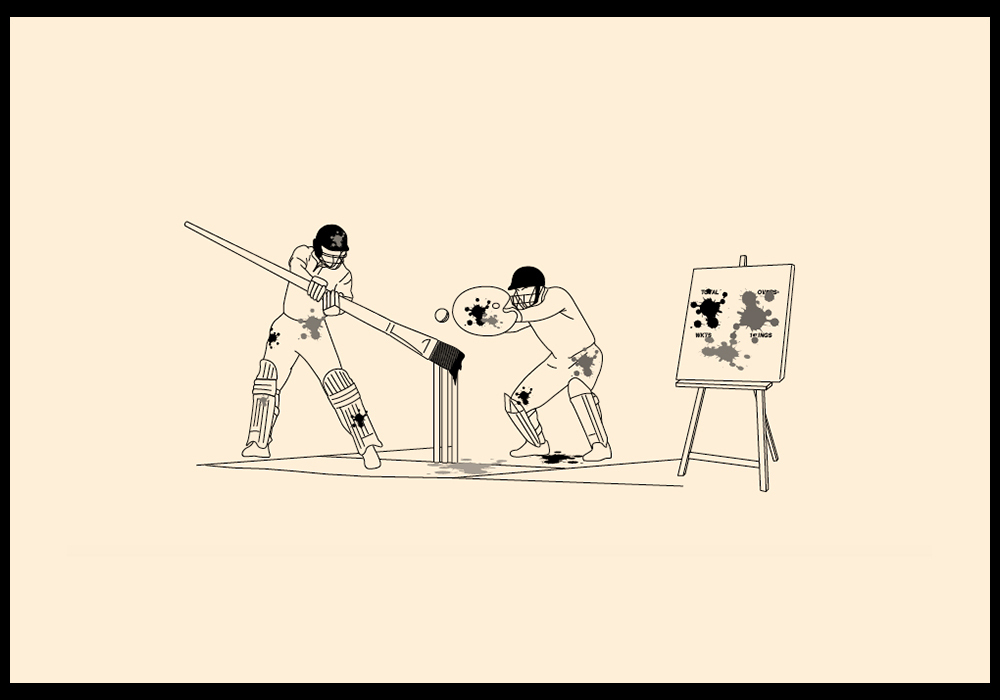 The words of artist David Shields ring true for every one of us who have tried our hand at everything sports.

“I picked up cricket and basketball, before trying my hand at tennis, volleyball, netball, indoor soccer, touch rugby, baseball and then golf. Safe to say I love sport.” The words of Gippsland-based artist David Shields ring true for every one of us who have willingly tried our hand at everything sports – we love it. —

While our neck of the woods features incredible sporting talents, this isn’t one of those stories. David has tried his hand at just about every sporting pastime, but by his own account, he’s never really excelled at any of them. For David suiting up wasn’t about being great; it was about getting the best out of himself, the little memorable moments that happen along the way; the contest, the challenges and the camaraderie that all comes with team sport. It wasn’t about medals and glory, rather it was about continually experiencing the feeling you have when you knock one right out of the middle with your cricket bat, winning the contested footy or, David’s favourite, flushing a drive down the fairway. Yup, immortality for his sporting exploits wasn’t a feat David ever reached whilst playing, yet by following his passion he’s managed to adorn the honour walls of sporting clubs all over our countryside. It’s his passion for art, combined with his passion for sport that’s earning him praise. Trading a bat for a brush has become the highlight of David’s sporting career. He may not have been the first player picked for the footy team year after year, but David was always the odds-on favourite to win his Nan’s art competition against his six cousins! David’s love and passion for art started at a young age, being naturally drawn to creative pursuits. Gratefully, his teachers identified his talent and encouraged him to pursue it. Once high school was finished, David spent three years at Monash University studying a Bachelor of Visual Art or, as he puts it, “Enjoying life, painting and drinking coffee with mates. I didn’t produce anything great, but what I learned was fundamental in becoming the artist I am today”. His passion at school, his study at university and a little bit of fun gave David the confidence to know that he’d found his niche. Then there was a stroke of luck. As a 22-year-old playing cricket at Churchill, David decided that for a bit of fun he’d do a fictional sketch depicting the sides’ A, B and C Grade premiership celebrations. With himself and his mates drawn ‘front and centre’, Grubby Harvey behind the bar and Crocka Williams singing songs, it was just a muck-around project, yet it has become one that 18 years later still sits over the bar enticing lots of people to point, talk, laugh and reminisce. David recalls, “This artwork, or more importantly the ongoing interest from people in the piece, was the starting point of my passion to combine sport and art. People say the artwork reminds them of those old ‘Australian Sporting Heroes’ prints that sit dustily on barroom walls. Except now it’s a C-grader with a batting average of 7.4 runs (e.g. Scott Guerin) that has taken the place of the great Don Bradman, ‘The Goat’ is now ‘The Shark’, Mick Debono is Mick Doohan and Bluey Flanigan is the mighty Big Red Pharlap. Capturing local people and ‘immortalising’ them in oil is part of the reason why I love to create art for our local sporting clubs. Not only do I have the opportunity to capture the local personalities, but give them and their clubs a stronger sense of history, culture and, most importantly of all, fun!” The worlds of sport and art rarely come together. This is quite surprising for David, as what he gets from art directly relates to why he played sport; the challenges, the sense of place, peace and focus it brings when you’re competing, along with the joy you feel by being part of a team – one that enjoys sharing tales, more testing moments and laughter. As he moves from club to club David believes he gets to, 'look at the raw beauty of the games we play with fresh eyes and see the positivity that sporting clubs bring to our communities'. You wouldn’t just turn up on the day of the game and run out to play at your best, likewise, nor does David expect to just walk into the studio and paint an incredible piece. David draws great fulfilment and inspiration from spending time with his subjects; hearing about them, seeing their club, noting the intricate details and nuances that make them the legends of their local sporting ground. Asking David about his favourite project to date, his eyes light up. Earlier this year he was commissioned to capture 50 of Yarram’s most iconic club legends in a two-metre-long oil painting. Given just five weeks to deliver the ambitious project, David poured through the old newspaper clippings and images - given to him by the president - and formed a list of quirks, stories and inside jokes that you’d expect from a proud country club. The 50 people, from many different generations, came to life when the premiership cups, TAB tickets, empty Carlton cans and bag of cash were all strategically placed throughout the painting. Yarram President, Anthony Rodaughan, believes David nailed it, “The artwork was an absolute feature of our anniversary celebrations. We knew we wanted something unique to bring to the event and something that could be an on-going reference to our club’s history. David really understood what we were after, and due to the money donated back to the club from the sale of prints of the picture, the cost of the original artwork is almost covered”. With over 50 paintings finished, David is excited about the direction his art is taking and the combining of his two passions, “It’s a great feeling. I’m so thankful for the amazing support I’ve received from the community and I feel the journey is just beginning”. — If you want to see more of David’s art, you can follow him at davidshieldsart.com and on Facebook at davidshieldsart77.