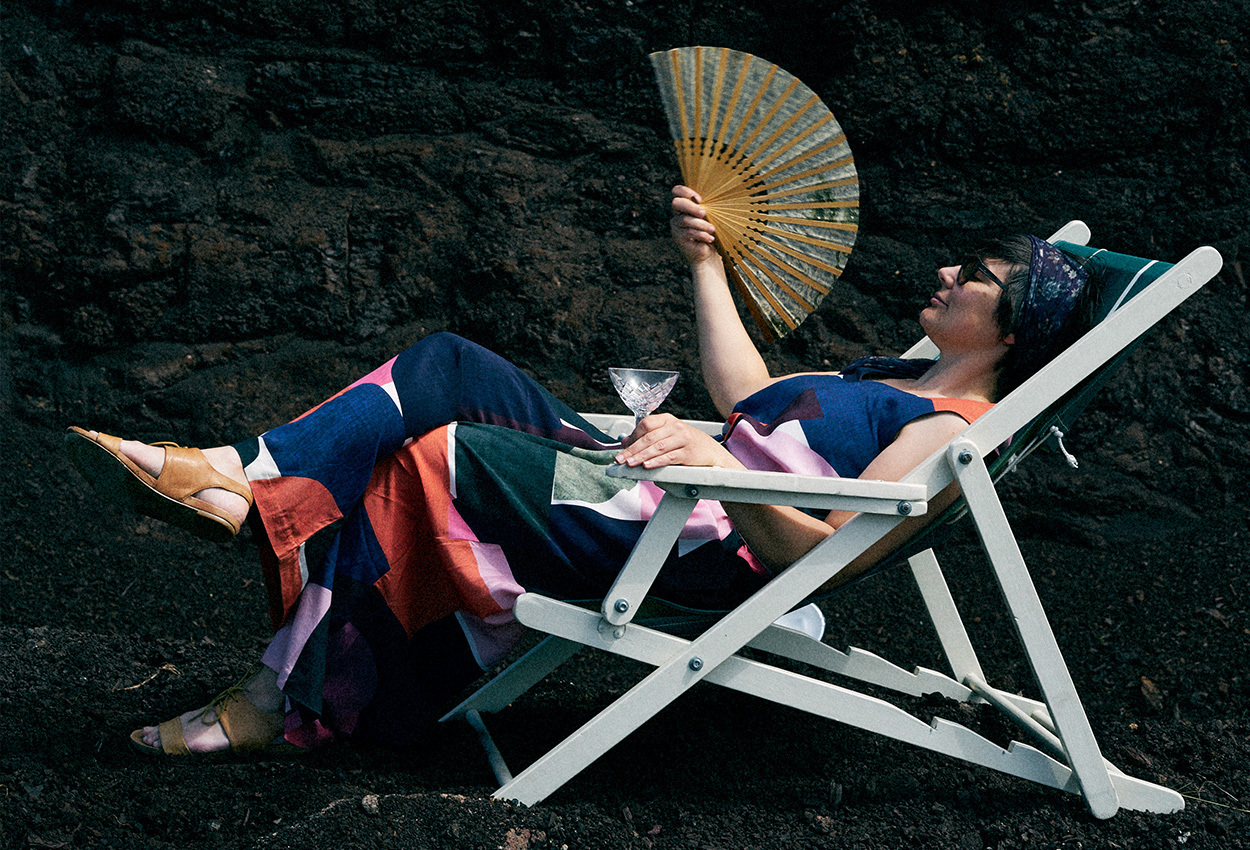 The Art of Rehabilitation.

The Coal Hole. A pile of dirt or a cool arts project?

As I bob in my unicorn floatie on a lake at the bottom of a coal mine, I couldn’t help but wonder how the hell did a crazy art project get me and my gang of femo artists here…
—

Behind me, to the right, is a giant power station that’s puffing those ominous white fluffy clouds into the sky; these have become symbols of everything that is killing our planet. To my left, an old powerline stands half submerged, along with the history of the river that flowed backwards as it fell into the mine. To my side, shrubs and trees had almost fought their way to the top of the sheer coalface, trying to reclaim the space, only to be suddenly wiped clean by fire and then transformed into a giant checkerboard, the white squares formed by clay capping applied like gauze on a third-degree burn.

It could be mistaken as just giant piles of dirt, if it didn’t have the predisposition to spontaneously combust. For all the talk of a ginormous Garden of Eden park rehabilitation strategy, it’s strange to think we already have it right here, right now and it’s kinda awesome, until the calming silence is sliced open by the cracking and shifting of the mine walls, heaving under their own weight. Random rocks break free all of sudden and tumble to the mine floor below.

Long white pipes poke out of the coalface, like the legs of a half-buried prehistoric spider, water gushing out of them, pooling and then trickling past acid pools, before, I guess, eventually flowing into the lake I’m bobbing in. In front of me is a beautiful rolling hill, bright green and covered in daisies, where two miners pretend to fish. Rhonda Hastie, the technician from the Mine Rehabilitation Commission, lounges in her grandma’s vintage 1930s deckchair, Esther Lloyd and Bec Vandyk are snapping photos and Grace Ware livestreams the whole thing.

Everyone is in hi-vis. How did we get here? What is this crazy ass art project? And, will any of it really matter in the end?

I started Coal Hole with artists Mark Hooper, Esther Lloyd and Grace Ware. We wanted to make art about the mine rehabilitation and to create awesome employment opportunities for young artists who could play a part in trying to solve problems surrounding mine rehabilitation. In June, 2019, Coal Hole became a concept for a radical community engagement strategy, one that could cut through the fear of using so much water in a drying climate, or the trauma caused by the 2014 mine fires. It was a project on the facts and basic mechanics of mine rehabilitation that would be accessible to the whole community, not just scientists and engineers. We wanted to be paid as we developed art that aims to empower the community — to have a stronger base to advocate and negotiate for a ‘just transition’.

Over the last five months, we have employed local artists to facilitate art-based workshops and events to explore the critical elements in the mine rehabilitation, all the while questioning whether filling the three coal holes with 3000 billion litres of water (the equivalent volume of 5.5 Sydney Harbours) over our lifetime is really the best deal, or are the mine companies just wanting to get out as quickly and as cheaply as possible?

Our contract with the commission ends in December and we are now trying to find more finances to rehabilitate the community, not just the holes. We’re hoping the mines can allocate additional budget for a continuing project.

Large-scale public art has been a critical element to mine rehabilitation in Germany, which is what our model is based off. Artists in the Valley have the skills and space to build their own ambitious works, creating employment opportunities that otherwise would not exist. Regional artists and creative types are commonly unemployed or underemployed, which can lead to or exacerbate other issues, such as higher instances of drug or alcohol dependency. But with resources and upskilling, we can take advantage of making art on an already global platform, reframe our story and lay more foundations for a booming tourism industry in Gippsland.

Did Coal Hole work? I know the numbers stack up well, as we pretty much had part-time employment for six months to explore, learn, create and communicate. Only artists who really cared about the community were invested, but every month more and more artists came out of the woodwork. One by one we had conversations about mine rehabilitation and about the mediums to apply when exploring different concepts. Even though there was money potentially available for artists, the fact that the project was too political meant that lots of local artists didn’t want to get involved. I didn’t understand this at the start, but I do now. Sometimes, it’s just super bloody nice to make work about whatever you want.

I have to say, we started this project having a stance against a pit lake, but it became clear two months into the project that people in higher positions had a preference for this solution. Fatigue hit us as we ran two creative workshops per week and prepared our third event, so we had to decide a point of focus for the Coal Hole project. Rather then trying to find alternative solutions, we decided to accept that as the solution and then try to understand the implications in more detail. Still, we were completely torn on whether we should be publicising or protesting the pit lake solution.

Now, at the end of the project, we can say that what got us through was trust. Trust that what the scientists and engineers were saying is true, knowing that it would be very hard to check their calculations without going back to uni. Trust that Rae (Mackay), the Mine Rehabilitation Commissioner, and his team had given us as much access and transparency as they could. Trust that the community will find the strength to hope again. Trust that the local council will use this opportunity to move to a new identity. Finally, we must trust that the next generation can solve this problem even better than we can now, and not hate us for giving it to them.

Via Cole Hole, we have explored:

The power of voice and narrative through zine making;

The unseen effects of growing up next to the power stations through experimental sounds;

An opportunity to give that rehabilitated land back to the Gunaikurnai traditional landowners by learning how to weld and create a recycled metal kangaroo sculpture;

Mine construction and collapse through model making;