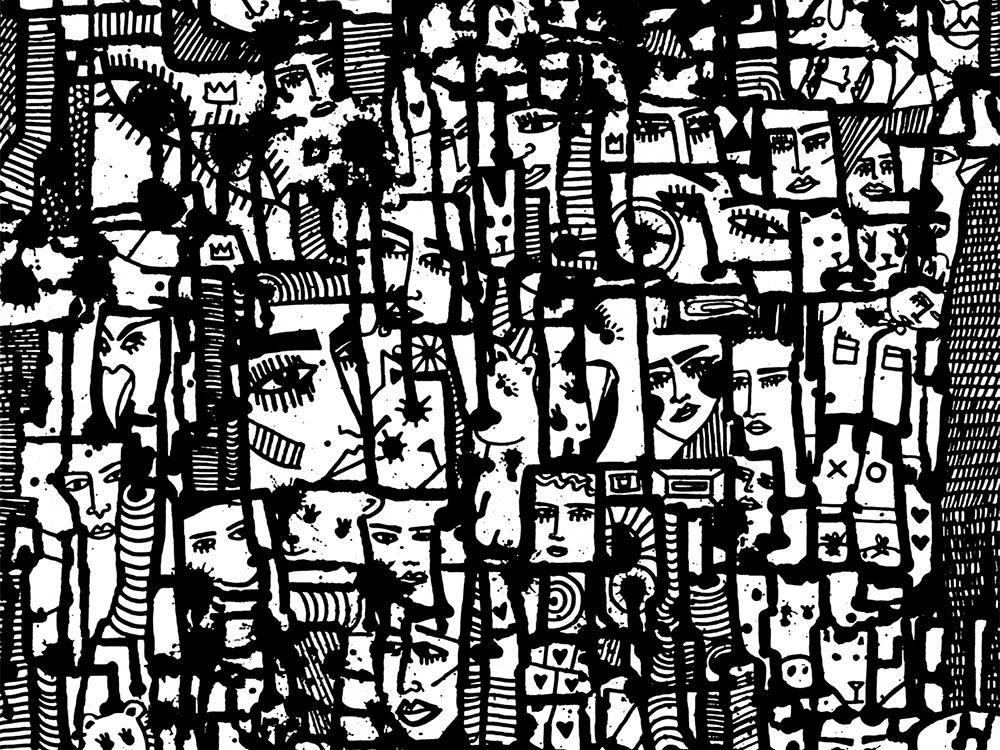 The art of healing.

Artist and art therapist, Lewis Beilharz shares his journey on exploring the world, rediscovering his backyard and holding a solo art show in New York.

Does creativity course through your veins, but you feel you’re round peg in society’s square hole? Artist and art therapist, Lewis Beilharz shares his journey on exploring the world, rediscovering his backyard and holding a solo art show in New York.
—

I grew up in Trafalgar and come from a migrant family. My Dad’s parents were German, and my Father grew up in Palestine. They immigrated to Newborough after World War Two to work at the power plant. My Mum’s mother was the daughter of a coal miner from Wonthaggi and her father, an Irish immigrant, was a policeman in Morwell. My family has a property in the hills of Traf, where my childhood was spent playing in the bush and surrounding farms from sunrise to sunset. The diverse family background and life in our isolated haven let my imagination flourish.

From primary school through to early high school, I discovered the limitations of being a creative, artistic person living in a small town. If you weren’t a member of the local sports team, there weren’t many other options to engage with the community. Therefore, a strong sense of a non-belonging extended into some teenage rebellion, skipping school and eventually some run-ins with the police for petty crime.

Gratefully, my strong family got me back on track, sending me to a different school with the opportunity to utilise my creative skills. Finishing high school, I still struggled to maximise my potential, as I was too busy “fitting in”. A month after my 18th birthday I was accepted into Fine Arts at Swinburne University and moved to Melbourne.

Life in Melbourne was an amazing time, surrounded by other creatives, artists and weirdos. I made new social circles and really discovered who I was as a proud gay man. After graduating Art School I had a bit of an artistic burnout and moved to London, which makes Melbourne feel like a small town. The culture, art and people in Europe expanded my horizons further.

Working in hotels and dancing at bars I saved for a trip to New York. A dear friend offered her apartment for a month in Lower East Side, Manhattan. This single month in NYC, by myself, changed my life. The people I met, the galleries, the atmosphere – I’d never felt so included. I’d finally found my own tribe. I fitted it.

With my bank account depleted I flew back to London. Continually jumping from job-to-job was getting rough, I was barely making art and, at 26-years-old was having somewhat of a quarter-life crisis. My Mum had been doing some ‘detective work’ to inspire me back to Australia. She found an art therapy course at Melbourne’s Phoenix Institute – I was heading home. I was completely broke, jetlagged and sleeping in my childhood room. I wanted to return to New York, but I needed the skills and visa.

My second-year placement for art therapy was in a non-for-profit school in Gippsland for teenagers facing a multitude of challenges. Initially apprehensive, we found common ground through art and I realised that creative practice gave these young people the opportunity to shine, where traditional schooling may have left them behind.

Art therapy is a non-biased experience that is personalised to individual’s situation, regardless of age, education or socioeconomic status. The creative process of making art can improve a person’s physical, mental and emotional well-being. You don’t need to be talented or an artist. There is no right or wrong. It’s about giving it a go and having the person trust their creative process. Expressing one’s self artistically can help people to resolve issues, as well as develop and manage their behaviours and feelings, reduce stress, and improve self-esteem and awareness.

A week after graduating I landed a full-time art therapy position in the Latrobe Valley. I was based in a refuge working one-on-one with young people aged between 12 and 25 who were experiencing homelessness. Quickly, I became immersed in the community and found myself working for, and with, a multitude of non-for-profits groups, including Berry Street, Quantum Support Services Inc. and the Centre for Multicultural Youth. My role became extended from the one-on-one sessions to running group workshops, exhibitions and speaking at different high schools. I’ve been happy to experience that our next generation of young people I have worked with are open to different forms of creativity.

These experiences in the community where I grew up was as life changing as my travels abroad. It’s humbling to witness the challenges that the Latrobe region experiences through poverty and unemployment. I could see myself in some of these youth – many who did not know their place in society.

The vision of my art program was to help inspire young people and I witnessed the transformative revelations of these young people as they created art, built confidence and began to see a potential for their future. I was amazed to see how much Gippsland has evolved beyond the place I wanted to escape from as a young man. This was highlighted by the opportunity to run an exhibition with the Centre for Multicultural Youth for Melbourne’s White Night Festival. Our festival piece demonstrated a collective vision to celebrate our diverse community that was inclusive of everyone.

Eventually, I was granted a J1 visa to move to the USA. The hard work had paid off and I could recommence my dream of living in NYC. The limitations of the visa allowed me to work in the hospitality and retail industries, but I found a position in a high-end boutique selling suits and dressing celebrities. My art became part of a group show in the Lower East Side, and in 2015 I had my first international solo show in Manhattan, which was a dream come true.

—
“The creative process of making art can improve a person’s physical, mental and emotional well-being.”
—

I’m enjoying a life where I can be based in Gippsland running art programs, as well travelling between Melbourne, NYC and Los Angeles, to exhibit art and develop my career. A recent highlight was meetings
with the President of Sean Combs (Puff Daddy)’s Enterprises, who are interested in my youth outreach art programs and getting published as a featured artist in an NYC publication, BLEU. As an artist, I’m
pretty lucky as at 32, I’m still relatively young. The current collection of art that I’m excited to share with you will form part of my third solo show.

The path to this point has had multiple obstacles, and I’ve faced many rejections, yet my unrelenting determination to live my vision has remained. I will always be grateful to grow up where I did in Gippsland – a beautiful and diverse region that’s made me the man I am today. 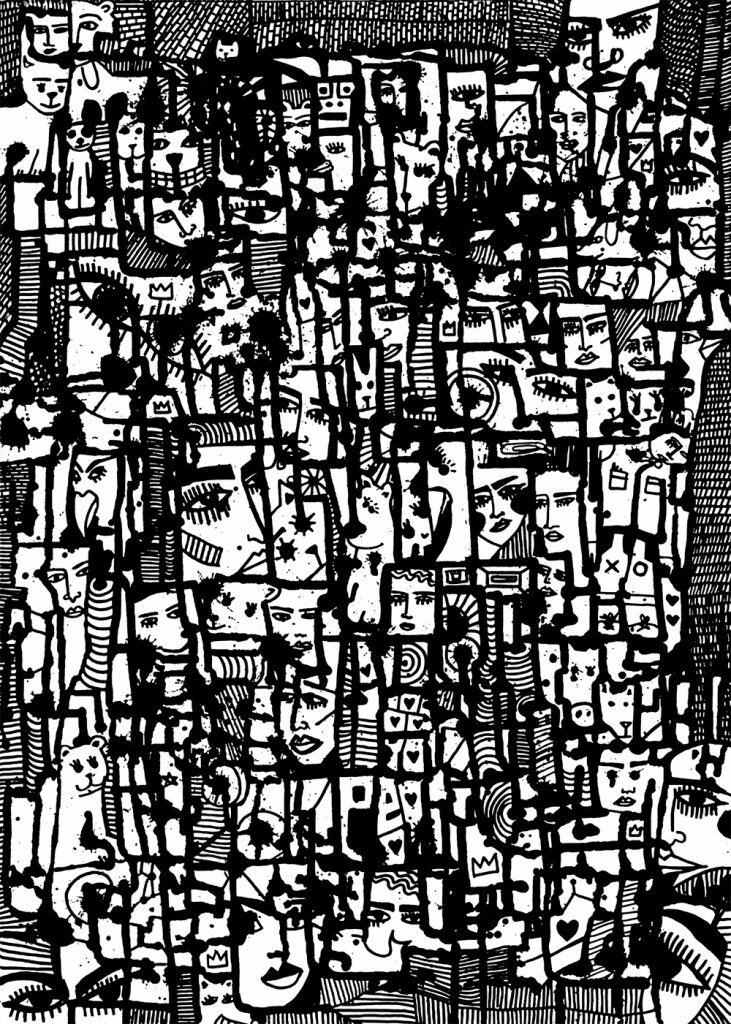