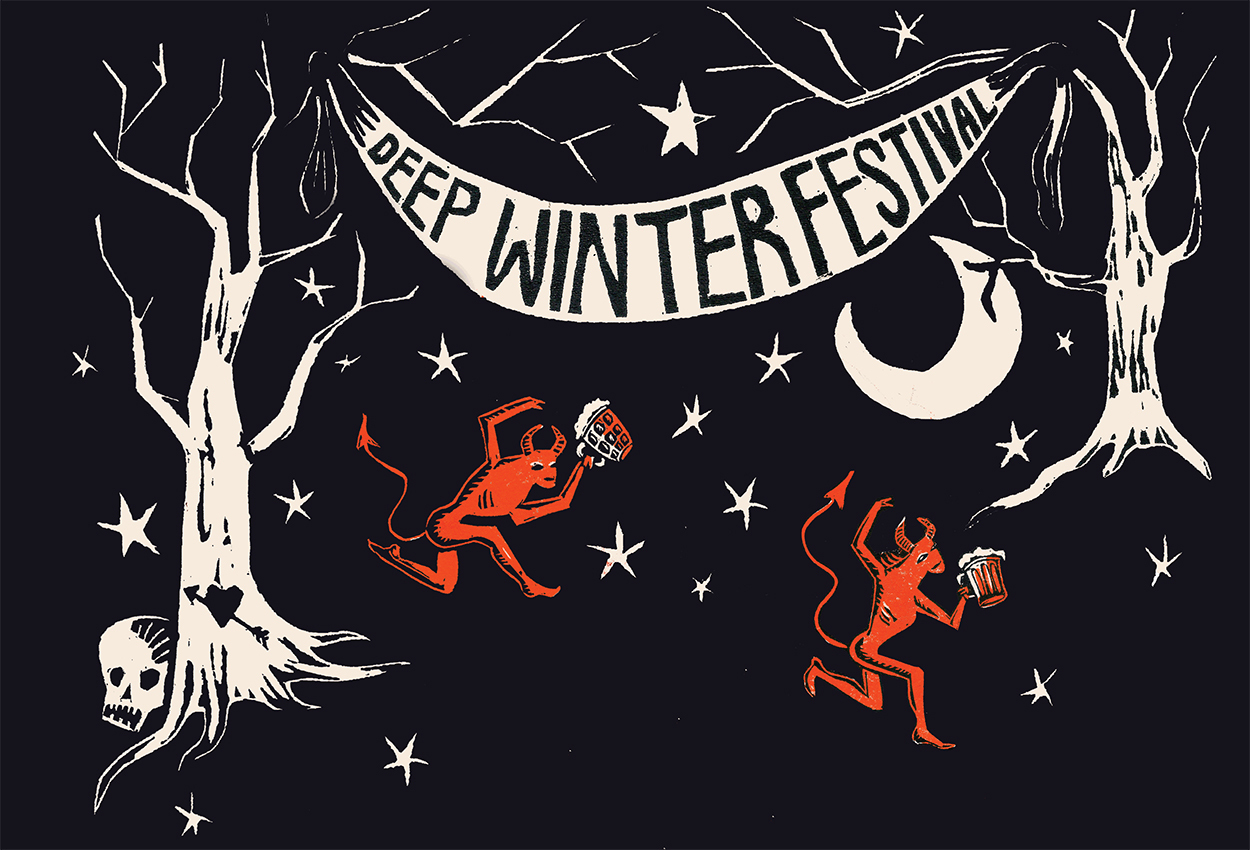 The Snowy River won’t be the only thing flowing through the East Gippy town of Orbost this winter, thanks to Sailors Grave.

The Snowy River won’t be the only thing flowing through the frequently sleepy East Gippy town of Orbost this winter. The guys at Sailors Grave Brewing will have the beer taps running and the doors to the old Orbost Butter Factory open for their inaugural Deep Winter Festival. This celebration of winter, the traditions of old, and, most importantly, beer, are set to draw amber fluid enthusiasts, those that dig hearty seasonal food in their bellies and jovial folk that enjoy fun to the Snowy River region this June.

Any Orbost local will be familiar that the town is home to the Sailors Grave Brewery. It’s hard to miss their revitalisation of the old butter factory. Completely befitting the dark winter feel the upcoming festival, this ageing slice of history, built in 1893, overlooks the paddocks on the edge of town and summons a juxtaposition of eerie old-world charm and some post-apocalyptic vibes. And while the local graffiti adorning the outside walls of the factory acts as a subtle reminder of quieter times, it is anything but quiet today, thanks to Chris and Gab Moore resurrecting the building and leading it back to a life of productivity.

Since establishing themselves inside the historic industrial building in 2016, the brewery has only been open to the public on limited occasions. With the husband and wife duo also juggling three kids, all under the age of eight, it has been some time since the last Sailors Grave shindig. Gab says that holding the festival was a long-standing idea, but one that had to be put on ice while she was pregnant. 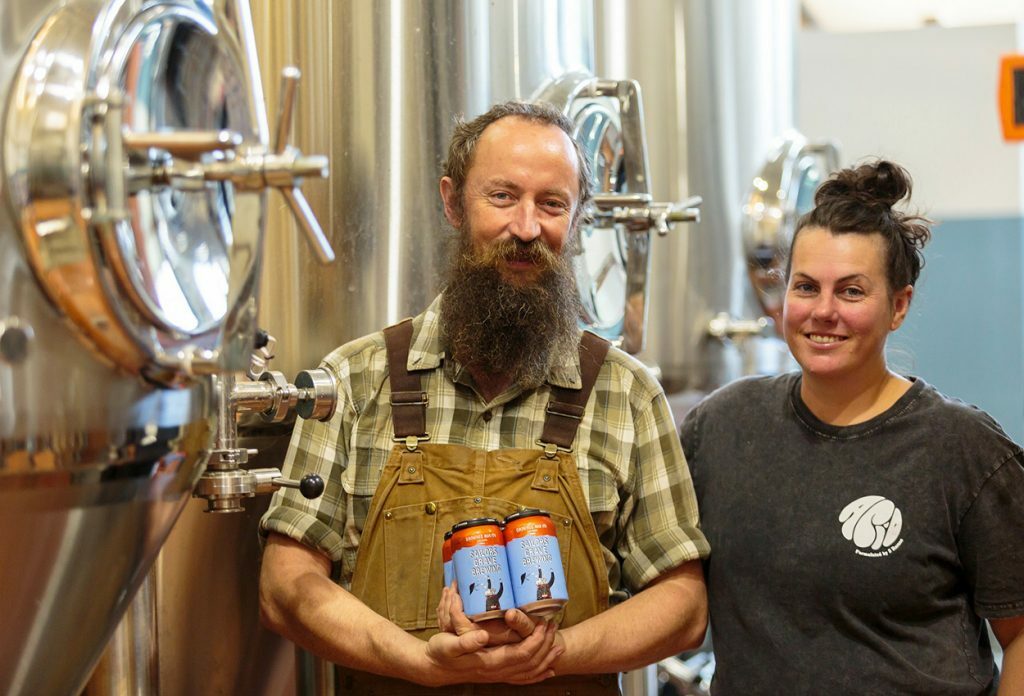 Gab grew up in East Gippsland and admits that she never thought she’d be back here, but after selling their restaurant/bar in Sydney, the couple returned home to her parents to take stock and be closer to family while raising their children: Orio, Hazel and Solomon, who is now six months old.

The brewery concept was born after their return to the country, and in 2014 they bundled-up their two kids and took off on a three-month beer adventure of America. The trip gave them a wealth of insight, inspiration and helped establish their brewery dreams.

It is evident that the American craft brewing industry is still a constant source of inspiration for the couple, as Gab says, “I’d like to see us going in the direction of Jester King or Fonta Flora”. Both breweries are heavily focused on nurturing a connection with their agricultural surroundings and the use of seasonally foraged local ingredients. The couple is passionate about the connection to place and it forms a key foundation of Sailors Grave beers, all of which showcase a vast array of local produce that the family frequently forages themselves, including seaweed, coastal saltbush, carrot seed, blueberries, sea figs and salt from the ocean. 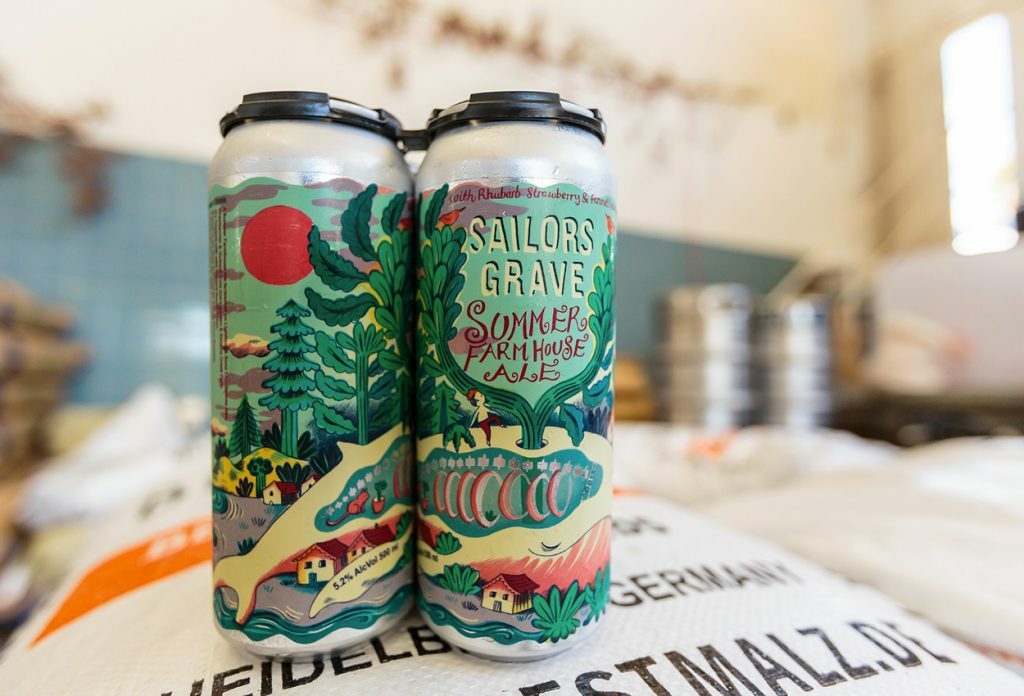 Gab says, “We could have set up closer to Melbourne or Sydney, which would have made logistics less of a nightmare. But it’s our rural location that makes us who we are”.

For beer lovers, the Deep Winter Festival is an opportunity to actually taste Gippsland in a liquid form. From the branding to the ingredients, each brew reflects the plentiful bounty of produce that surrounds them.

Their future plans for the brewery will continue to foster this connection to the land. The couple hopes to move the brewery to their coastal family farm at Point Ricardo. Fittingly, the couple met studying landscape architecture and their enthusiasm for creating green spaces is reflected in their dreams of planting orchards and drinkable botanical gardens on the grounds of their future brewery.

The Deep Winter Festival, happening the last weekend of June, further strengthens their philosophies on providence. Not only is it an excellent opportunity to get your lips over a pint of Sailors Grave, but you’ll be able to sample local produce prepared by some of the best restaurants in the region. Hands up if you’re already salivating?!

Gab reiterates that the festival, “…is to showcase our beer and the whole area to those further afield. We live in the most amazing place and we hope that people will get out and explore —see what East Gippsland has to offer”.

With extensive forest, coastal walks and the alpine region just next door, there’s plenty to fall in love with.

The opening evening, aptly named the 'Long Dark Night', forms a collaboration with the local restaurant, The Long Paddock, who will be serving a degustation dinner on the long table, with dishes paired with Sailors Grave Seasonal Farmhouse Ales. This is bound to be an imaginative culinary trip through the four seasons. For example, the spring ale was made from wild weeds and bergamot, and the summer drop features strawberry, rhubarb, fennel pollen and chardonnay lees.

Great food, conversation, entertainment and education will continue all weekend, with Chris and 3 Ravens Head Brewer, Brendan O’Sullivan, running a brewing workshop on Sunday to satisfy your inner ‘beer nerd’. Interested in honing some old-world skills? The Fermentary, fermenting gurus from Daylesford, is hosting a workshop on making kombucha, water kefir, jun tea and mead.

On Saturday the brewery taps will be flowing with drops as dark as the night sky. Two of the available beers are collaborations: one with 3 Ravens and the other with Warragul restaurant Hogget Kitchen, which features flavours of foraged mushrooms and pine needles. Aware that beer is best accompanied with great music, the other Sailors Grave, a Novacastrian Celtic punkabilly band, will ensure the dancefloor is packed with merry jigging.

To close this three-day barrel of fun-times is a solid, Sunday sesh at the brewery—that’s free! There’ll be beer tasting paddles, more live music and Trevor Perkins’ famous charcuterie skills will be served up for your sampling.

For their inaugural festival, Sailors Grave Brewery is ensuring the depths of Orbost’s winter are no longer cold and lonely. Forget the VB and drive a little longer through the forests of East Gippsland—you won’t regret it!

—
Vist Sailors Grave website, sailorsgravebrewing.com, to get your mitts on some tickets to the Deep Winter Festival. 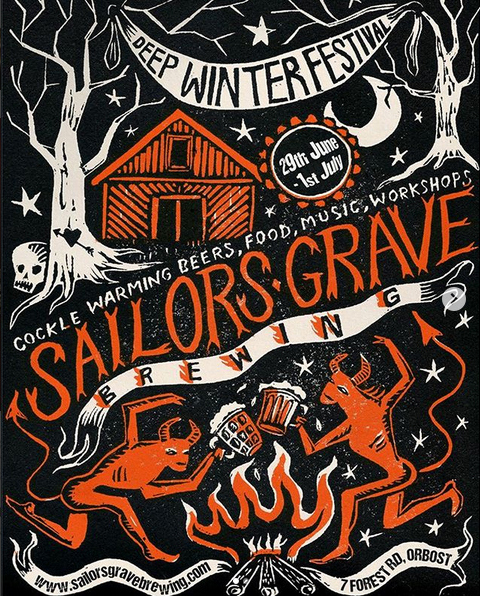