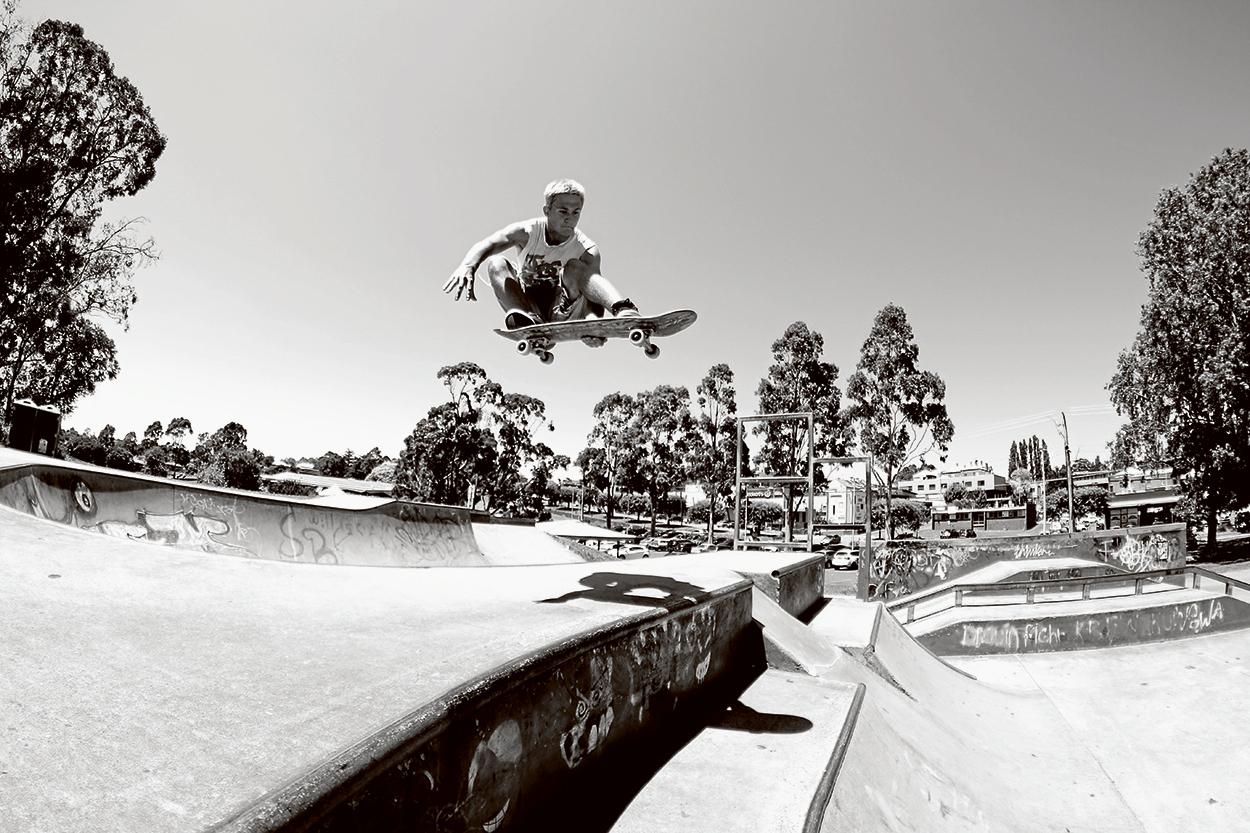 I’ve been told countless times by people, both young and old, that, ‘Skateboarding saved my life’.

“I’ve been told countless times by people, both young and old, that, ‘Skateboarding saved my life’. They mean it. It’s an earnest and heartfelt declaration of gratitude”, explains Craig Brown, a partner in Lanbrohini, a skateboard company started by three guys from Churchill, that now sponsors several skaters throughout the Gippsland region.
—

Craig continues, “Skateboarding is more than just a pastime – it’s a community. It has its own language and rules, just like any other community, and it’s surprisingly inclusive. Quickly search on YouTube and you’ll find parent-filmed examples of (at-first-scary-looking) teenagers helping a first-time skater. I’ve frequently seen, and been on the receiving end of, a casual welcome from the local skaters when visiting a park in another town”.

“Anti-social behaviour tends to be misappropriated at skate parks. Tell me one reason a skateboarder would want broken bottles at the bottom of a bowl or strewn around an obstacle. From what I’ve seen, skaters tend to be the native custodians of these environments; cleaning rather than damaging them. Most negative behaviour comes from non-skaters, largely due to the fact that skate parks are located away from the community in a misguided attempt to distance ourselves from these anti-social elements.”

This belief of ‘anti-social behaviour’ is articulated in a report undertaken by the Youth Affairs Council of Victoria: “...the perception of young people in public places, especially those congregating in groups, is usually that they are up to no good....as young people are often perceived as ‘troublemakers’ their use of public space is increasingly regulated”.

Yet a steady release of research publications focused on the social dynamics occurring at our skate parks continues to reinforce the observations of senior skaters, such as Craig. As the following 2014 Western Australian Urban Studies paper details: “Concerns about undesirable social behaviour often underlie opposition to skate parks or provision for skaters in cities and suburbs. However, actual evidence supporting these assertions is scant, and in this study, pro-social behaviours were far more commonly observed than anti-social behaviour. Considered skate park location and planning, and engagement of young people in their design can minimise many perceived problems. More broadly, the visible presence of skate parks and other youth amenities in our neighbourhoods’, towns and cities, powerfully signals to young people that they too are welcome and a part of local place identity”.

Craig continues, “Skateboarding is truly a multi-generational activity. Family men of 40-years or more mix with teenagers and children, and discuss techniques and equipment, offer advice and support. I’ve seen men in their forties tentatively listening to a 19-year-old describe how to perform a particularly complex manoeuvre.

“Skating is inherently dangerous. That’s actually one of its greatest assets. It’s a battle of the mind. You can do it alone, or in a group, and you decide when it’s going to happen. It’s via these aspects that skateboarding creates a niche for people who don’t ‘fit’ traditional team sports. Whether it’s the break from a not-so-great home life or a moment of catharsis from the pressures of work - each new trick presents a challenge or goal. Something to strive for. Something to be achieved.”

With work rapidly progressing on the refurbishment of the Sale skate park, as part of the Port of Sale Precinct Redevelopment Project, we got in touch with Jeremy and Vicki Kasper, passionate advocates of youth activities and owners of Kurb Skateboard Shop. “...10 years the Council (Wellington Shire) built what is now the bowl section of the park while leaving the original section of metal ramps intact. It was obvious to me that it’d only be a matter of time before the park would need repair...so I began writing letters...outlining how important the skate park is as a community asset, how it assists youth development and outlining that many of the park’s users (approximately 60%) don’t actually participate in other sports, skating is their main outlet and this portion of the community needs to be represented”.

Jeremy, one of the lucky folk able to construct their lifestyle around skating, continues, “After lots of pestering of Council and a petition with hundreds of signatures in support of the park, I got a call asking if I’d be a representative on the Redevelopment Steering Group Committee”.

Jeremy continued discussions with other park users, including BMX riders and the rare “bearded scooter dudes” and was stoked to have most of their recommendations implemented. He states, “I feel very privileged to be involved with a project on a community level, but as a skater, this park is epic...It’s going to be the best and biggest park outside the metro area and I cannot wait to get my board and skate at my local...I guess it will be a success because Council came to the community and said: ‘Hey, we’re going to fix your skate park. What would you like to see?’ They delivered to the community. A big ‘thank you’ to the Council. They really did work with us”.

Happily, we can report that skate community support is extending throughout Gippsland. For example, Mayor of Baw Baw Shire Councillor Joe Gauci was quick to offer the following: “At Baw Baw Shire we have a big focus on creating vibrant, healthy and inclusive communities that support the growth and development of our municipality. As a Council, we recognise the importance of providing a range of recreation opportunities for all members of our community, and skate and BMX facilities are a big part of that...Our continued investment into recreation facilities has seen the development of a concept plan for a new skatepark in Yarragon along with recent improvement works at the Warragul and Neerim South facilities. Further works identified through the strategy have been embedded into Council’s 10-year capital works plan…”

Continually fostering the inclusion of our communities’ youth should be imperative for us all, and skate parks are a great way to maintain these efforts. The results can be surprising, yet extremely fruitful. Take Ben Hermans, a skater from near Bairnsdale as an example. Ben began building skate parks at home in the bush with his Dad. Now he’s built community skate parks in India, Nepal, Ethiopia, Palestine and will be shortly heading to Burma to build a facility for Yangon’s youth with Make Life Skate Life. These are positive projects that may just save other youngsters lives or at the very least, be a hell of a lot of fun!