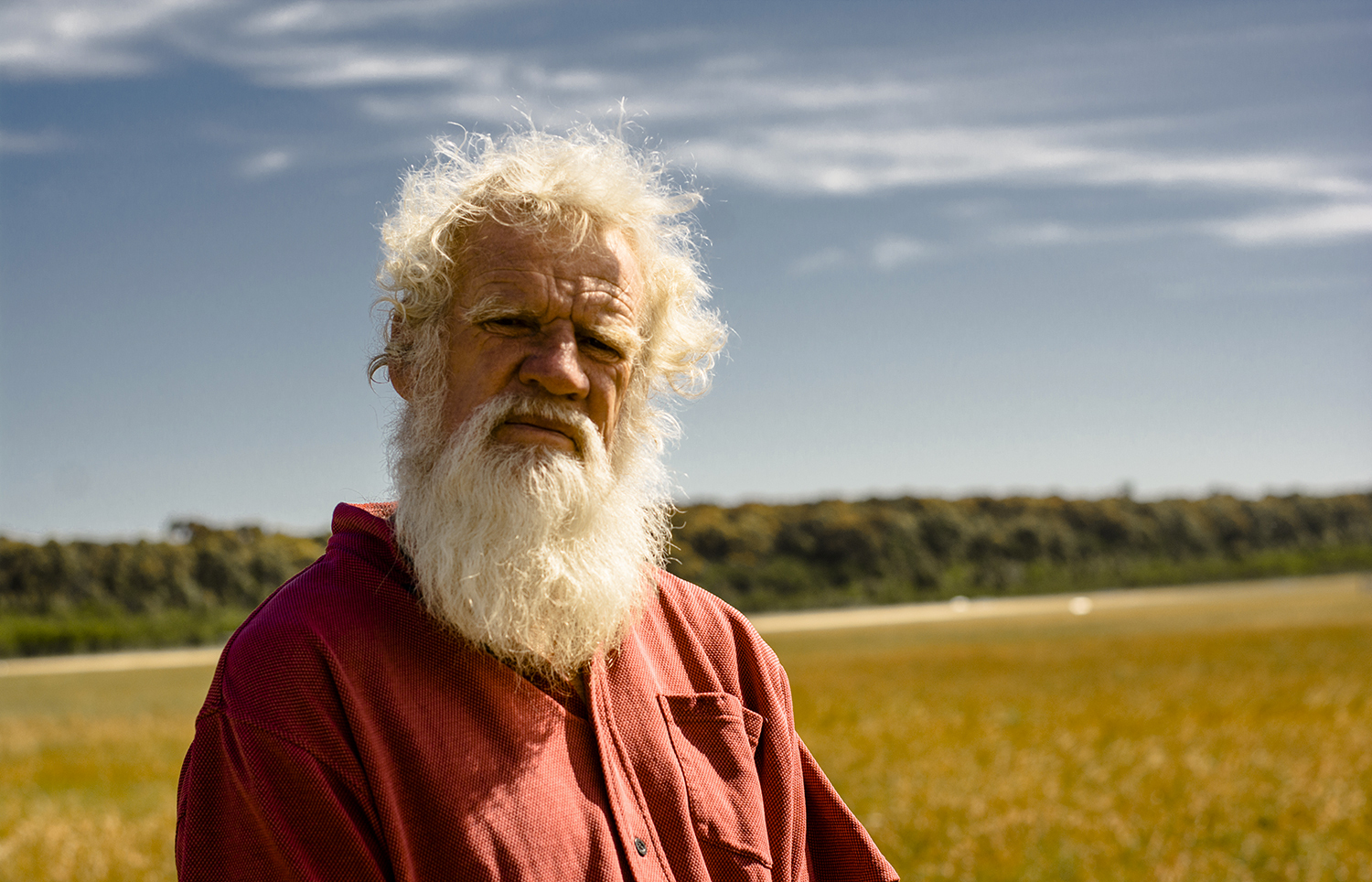 If you only read one article, make it this one about Bruce Pascoe’s seeds of change.

Bruce Pascoe’s life work is so much less about where we’ve gone wrong, but where we can go right.

ABC’s 2013 documentary series First Footprints initially introduced me to the tracks at Willandra Lakes, western New South Wales. For the uninitiated, they are 124 footprints that have been preserved in mud for 19,000 to 23,000 years and form the largest collection of Pleistocene human footprints in the world.

The most impressive track in terms of speed is T8…"the estimated height of the person who made the tracks is 1.94 m (~ 6.4 ft)...Pace length increases from 1.8 to 1.92 m over 11 m, indicating acceleration,
and speed is estimated at ~ 20 km/hr. (Webb, S. et al., Pleistocene human footprints from the Willandra Lakes, southeastern Australia, Journal of Human Evolution, 2005)

The above maximum speed was increased to 37.3 km/hr in a subsequent study, Webb, S., Journal of Human Evolution, 2007. To put this in context, approximately 20,000 years ago, a 6’4 Aboriginal man, living around the typically dry Mallee country, was able to achieve a speed in line with the 44km/hr Usain Bolt reached during his 100m World Record run at the World Championships in 2009.
And this ancient man was running barefoot, in mud.

I remember learning this incredible information and thinking, “How?!” It was obvious that if supposedly opportunistic hunter-gathers only dined on Witchetty grubs and the odd kangaroo they would then struggle to reach such seemingly modern day feats. Yet, the documentary didn’t really digress further, other than suggesting that the Aborigines must have been able to optimise their diet. This is where East Gippslander, Bruce Pascoe enters the frame:

Many Australians are curious about Aborigines; some, like Andrew Bolt, are alarmed, and some with solid Christo-socialist credentials get agitated at my kitchen table and lean their arms upon it and implore, at a closer, more insistent distance: houses, crops, agriculture, sewing? I’ve gone too far; I’ve exaggerated in my desire to defend the race. They understand defending the beleaguered, many do it on a professional basis, but they like to think that, true to their professions of law, welfare or education, they never go outside the realm of fact.
(Andrew Bolt’s Disappointment, Bruce Pascoe, Griffith REVIEW, Edition 36: What is Australia For?)

Now, it’s rare that the Bolts, Andrew and Usain, and an Indigenous Australian author would come together in any way. However, that’s exactly where I found myself as I delved into the writings of the eloquent and enlightened Pascoe, a Bunurong man that could potentially address my questions on Indigenous Australia’s pre-colonisation diet.

You see, Bruce’s most recent award-winning novel, Dark Emu, Black Seeds: Agriculture or Accident? explores revealing details that have seemingly been in front of us the whole time. As Bruce commented, ‘I met early resistance to the idea that Aboriginal Australians were involved in agriculture, so I searched the explorers’ journals because Australians love a good explorer and those journals were full of reference to agriculture’.

One such reference is a passage in the journal of Charles Sturt, who remarks on encountering a village in the desert where they were offered their choice of a new house, roast duck and cakes baked from the grains the Aboriginal people have been harvesting.

For many Australian’s, the concept of Aboriginal agriculture is an eye-opener, yet since the book’s 2014 release by Magabala Books, it has garnered numerous awards including Book of the Year at the NSW Premier’s Literary Awards. Coupled with Bill Gammage’s equally award-winning work, The Biggest on Earth: How Aborigines Made Australia published in 2011, there’s potentially gathering momentum in finally conducting further research into pre-colonial Australia. Bruce has expressed surprise at the lack of backlash he’s met regarding the information he presents in Dark Emu. Nevertheless, the fundraising campaign for his Gurundgi Munjie initiative for research into Aboriginal agriculture (launched on crowd-funding platform, Pozible), received over 130% of the requested funding.

When asked about the reasons for Gurundgi Munjie’s fundraising success, Bruce offers, ‘some of the domesticated plants of Aboriginal Australia seem ripe for development, and as they are gluten free and perennial they have enormous environmental advantages. They sequester carbon, don’t need irrigation, fertiliser or herbicide or pesticide. They are adapted to Australian conditions. Why have we refused to countenance them?’

Gippslandia photographer, Rachel Mousey was with Bruce and his team as they harvested their very first crop of indigenous kangaroo grass near Mallacoota. As she recounts:

Under a blazing sun, the rusty red husks of the native kangaroo grass are being harvested for the first time in over 150 years. It’s a small, yet significant, project that could change our thinking on food production in this country forever. As I walk through the knee-high grass, Bruce stoops down and gently snaps off a seed head, he examines it in his hands, looks at me and says, ‘It’s good for this country. It’s from this country.

The way Bruce talks I can’t help but imagine how this land would’ve been like before colonisation. Bruce has the capacity to take us back in order for us to go forward. Today I feel like I am witnessing a movement that’ll begin our journey.

Peter Wlodarczyk, also known as The Grass Man, takes a handful of tussocks and inspects them thoughtfully. After a few, seemingly long moments, he looks up, ‘Yep, good to go’. After hearing those four words a celebratory feeling fills the air – the seeds are good for making flour.

Over the next few days Bruce, his family, the community and the volunteers who’ve travelled from near and far, continue on with the harvest. They progress the harvesting techniques and then bake a delicious loaf of kangaroo grass flour bread. I don’t think history can overlook this harvest. There is a change in the air.

Amazingly, Aboriginal people may have been baking bread from indigenous grains up to 36,000 years ago, 19,000 years before the Egyptians. This information would re-write history books, but Bruce points out that his research and the continued progress of Gurundgi Munjie can have a more significant influence closer to home.

‘I hope Aboriginal people can establish farm-based enterprises based on our traditional plants. Australia will adopt these plants, I am sure, but I hope they remember who domesticated them and allow this knowledge to inform their understanding of Australian history and the hurt and insult land removal has caused Aboriginal Australia. A lot would change for Aboriginal people if their view of history was accepted rather than scorned.’

Even with an additional 27 books and the celebrated Australian Short Stories magazine (ceased in 1998) already in circulation, it seems as though this 70-year-old former teacher, farmer, fisherman, lecturer, Aboriginal language researcher and archaeological site worker has plenty left to say.

Before leaving Bruce, we asked a simple final question, ‘why do you write?’

‘I write because I can’t stop,’ he replied, ‘The stories I’ve seen, and have been told, prey on my mind and won’t let me go. There’s a huge need for Australia to learn the real story of the country, rather than just about brave bullockies and drovers’ wives.’

Here’s hoping that all Australians have the ability and wisdom to reap what Bruce Pascoe sows.

To see more of Rachel’s work, please visit rachelmounsey.com.au, follow @rachel_mounsey_ on Instagram and take a look at this previous piece for Gippslandia, Here for the birds.