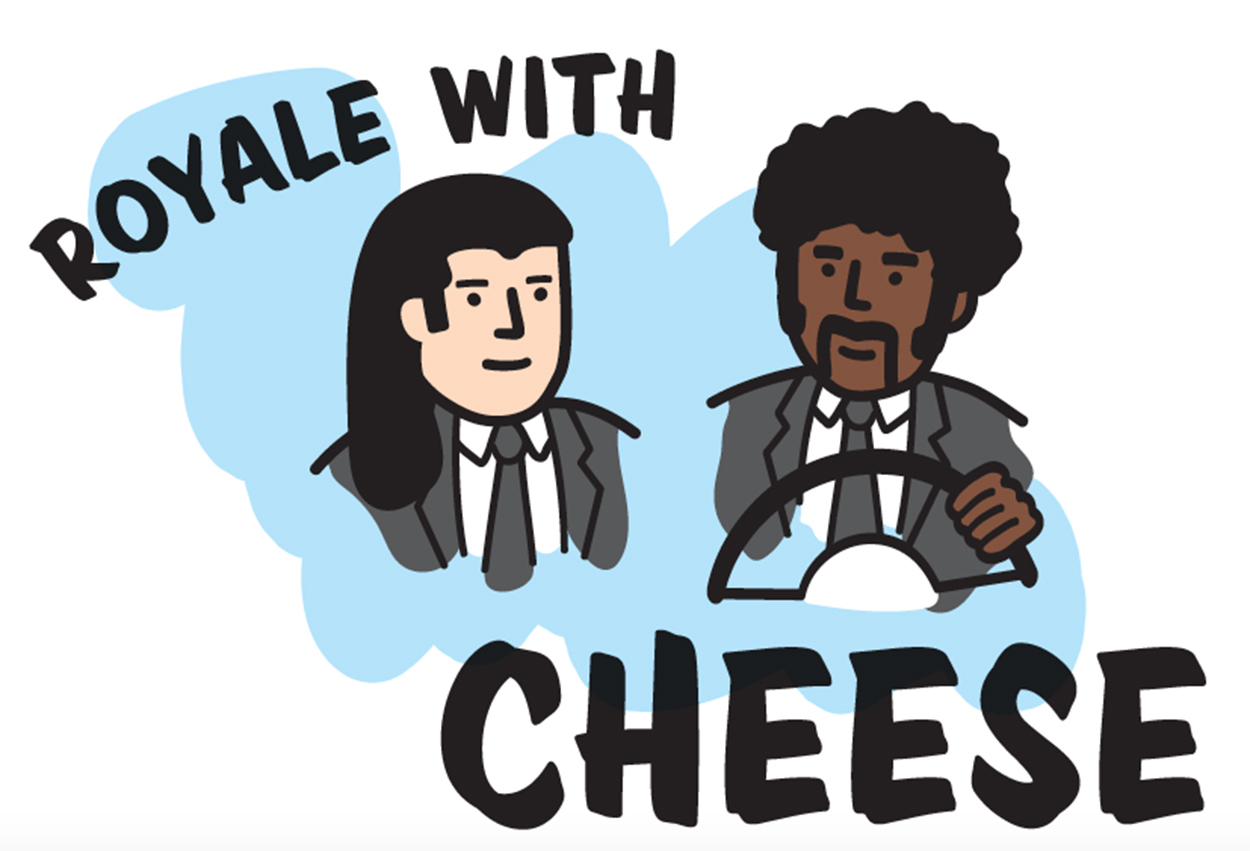 Vincent: You know what the funniest thing about Europe is?

Vincent: Alright, when you go into a movie theatre in Amsterdam, you can buy beer. And I don't mean in a paper cup either. They give you a glass of beer. And in Paris, you can buy beer at McDonald's. And you know what they call a Quarter Pounder with Cheese in Paris?

Jules: They don't call it a Quarter Pounder with Cheese?

Vincent: No, they got the metric system there; they wouldn't know what the fuck a Quarter Pounder is.

Jules: What'd they call it?

Vincent: They call it Royale with Cheese.

Jules: Royale with Cheese? What'd they call a Big Mac?

Vincent: Big Mac's a Big Mac, but they call it Le Big Mac.

Pulp Fiction is one of my favourite films, and I believe Quentin Tarantino is a genius director. He draws you into his movies with the attention to detail in his scripts. For me, it was either going to be the Royale with Cheese or a Kahuna Burger that was going to go on the menu at Ascot Food Store. For me, pineapple has no business being on a burger, so it was a no-brainer really.

As a chef, and due to travelling a lot, I’ve always been excited by the simple things. A simple thing executed well is so important to me. Chefs can overlook the simplest things and I believe our egos can influence what we cook; people start cooking with their ego and less with their heart.

My approach has always been about entertaining and pleasing people. You still want to get a reaction and have that ‘wow’ factor, but it has to come from the heart. This can be achieved quite simply by making the perfect burger, doughnut or even fried chicken. These types of foods make people happy, which is why we chefs do what we do. When I come up with new meal ideas I try to strip them back to the central element of each component and then examine the best way to create each part.

As I was travelling through the States, I realised that they’re the fucking gurus at perfecting the simple things in cooking. I remember visiting April Bloomfield’s restaurant, Salvation Burger (which is now closed, but check out The Spotted Pig), and it was the real deal. She would bake her own buns, break down her own beef, hand grind the mince—it was fucking mind-blowing! Eating a big burger patty that’s cooked to medium rare… it’s the perfection of this approach that makes me excited. My style of food culture is to pursue excellence, yet make accessible.

When I was developing the Royale with Cheese… for me, it was about simply creating the perfect burger.

Starting with the bun, this is the vessel that carries this baby, so very I’m careful in selecting the type of bun. I went with milk bread, a Japanese style of bread, which is very similar to brioche, but without the sweetness (I find the sweet buns a little too much). This technique originated in Hokkaido, Japan, and involves heating the milk with the flour to create the perfect texture. If you read my previous column you’d know that I work with Saint David’s, who source their cow juice from a farm in Drouin.

Moving to the patty. I always use Gippsland Natural Beef and select a combination of minced chuck and sirloin steaks with 30% fat. I find this is the best possible blend.

I chose Maffra Cheese Company’s Red Leicester for our cheese, as I love its buttery flavour and its great colour looks incredible.

Mac sauce is an insane mix of tomato ketchup, a little bit of American mustard and some finely chopped pickled cucumbers folded through it. This shit is like crack. I would bathe in it.

Finally, the lettuce. Now, this is a personal thing. I’m a texture kind of guy, so I always go for the classic iceberg, but if you’re into butter lettuce… hey, I won’t judge. That works too. Just remember to keep it simple.

That’s it—the Royale with Cheese. Created with more of Gippsland’s finest ingredients, yet worthy of two of film’s most famous burger connoisseurs, Vincent and Jules.

—
As Dave implores, when you’re entertaining, you need to channel your inner ‘Tarantino’ and nail all the levels of detail, even with seemingly simple ingredients. Enter Kiah Hillier of Hunter & Gatherer.

For entertaining with Gippsland’s food, Kiah’s a Tarantino equivalent. Her grazing tables and platters are prepared with such an eye for detail that they’re as much art as they are a mouthwatering feast. As a champion for our local produce, Hunter & Gatherer source from suppliers including Maffra Cheese Company, Tarago River Cheese Company, Artisan’s Table and more.

Kiah believes that, “The secret to a good grazing table is respecting the providence of food, selecting what’s in season and produce that complements each other. Foods like pomegranates, figs and persimmons will make the spread as eye-catching as it is appetising!”.

Keep your local video store alive and hire out Django, Kill Bill or head old school with Jackie Brown or Reservoir Dogs, and holler at your crew to come over and have them healthily grazing all night, after serving your pièce de résistance, the Royale with Cheese.