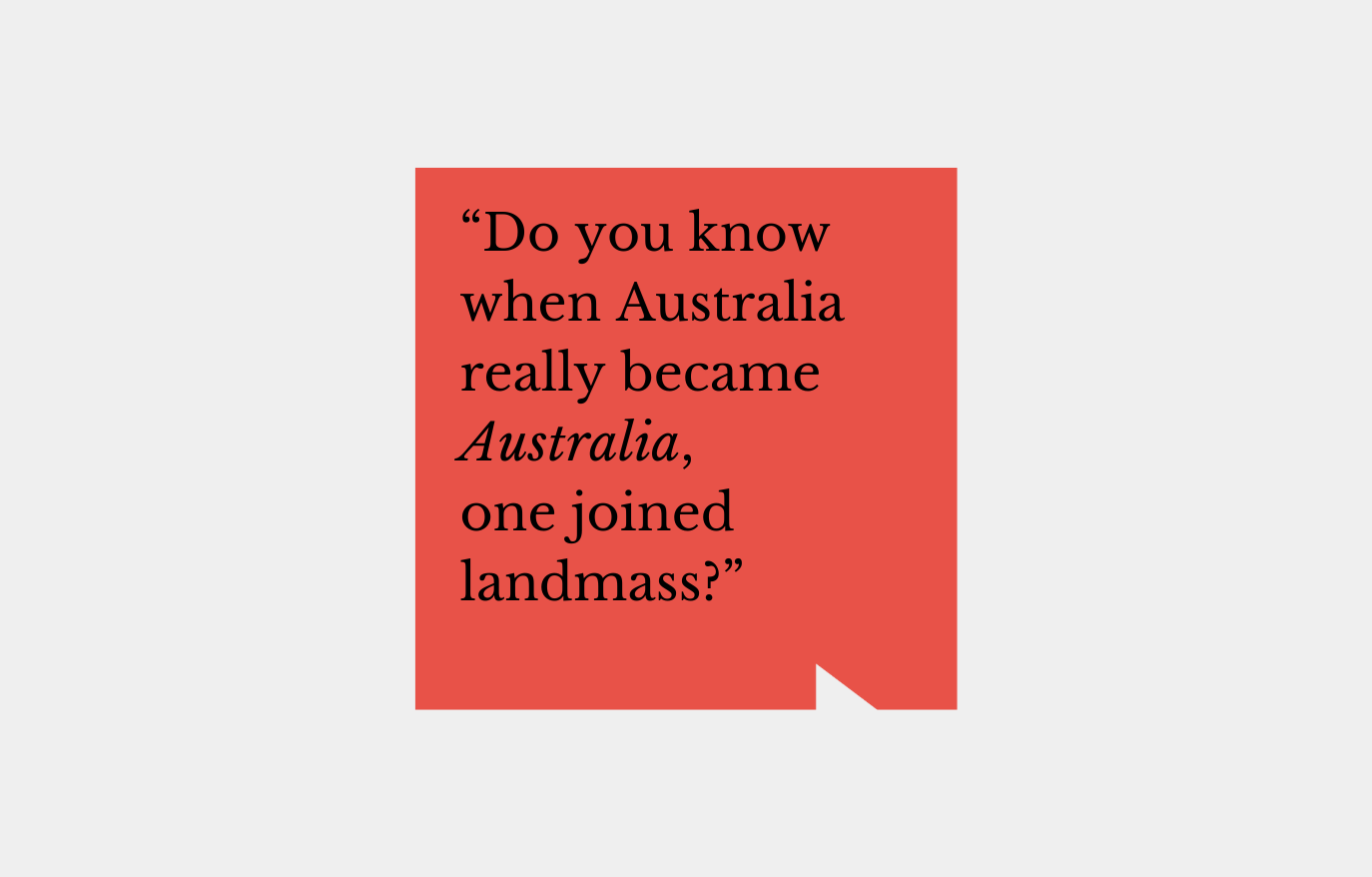 Let's journey through time to learn the processes that have shaped our region.

Did you know that Australia really only became Australia, one joined landmass, 55 million years ago?

But, some grains of sand found in Western Australia are the world’s oldest known material at 4,373 million years old, nearly as ancient as Earth itself. We understand that the earth moves under our feet, but we barely ever feel it – except for the rare crockery-chinking tremor. And, it’s difficult to appreciate how events in the distant past still reverberate throughout the region today.

Our coal industry is likely the most obvious example of an ancient occurrence that’s still having an immense impact on our communities today. It was around 40–13 million years ago (mya) that the brown coals of the Gippsland Basin were deposited in peat mega-swamps: swamps quite unlike anything in the world today.

With coal as our initial seam to unpick the past, we journeyed through time to learn the processes that have shaped our region into what we enjoy today.

Don the SCUBA gear, as a marine trough – the Tasman Geosyncline – covered most of southeastern Australia, including almost all of Victoria. Vast sedimentary rock layers were being laid down in this period.

Earth movements have destroyed much of the trough in the Gippsland region. Uplift, faulting and folding have raised land levels well above sea level. Volcanic activity, heating and pressure produced much metamorphic rock.

The Eastern Highlands (Great Dividing Range) are mainly folded Ordovician sediments. Erosion of these has exposed granitic and metamorphic rocks that were formed within the Earth’s crust. These are more resistant to erosion, so they are less dissected than the ‘softer’ sediments.

There is substantial volcanic activity producing lava flows and ash deposits, which can now be seen in the Snowy River region and north of Nowa Nowa.

It was during this period that the major batholith that forms Wilsons Promontory developed. A batholith is a type of igneous rock that occurs when magma rises into the Earth's crust, but does not erupt onto the surface.

This was part of the Lachlan Orogen that developed on the Pacific Ocean edge of the supercontinent Gondwanaland during the Palaeozoic Era. Granitic plutons intruded into the Ordovician sandstones, which form the basement rock of the region. The granite mass extends to northeastern Tasmania, and a land bridge connected Tasmania to the mainland. The higher peaks of Wilsons Prom are residual granitic masses, now flanked by lowlands of alluvial, aeolian and marine sediments.

(In case you didn’t know, alluvium is a deposit of loose clay, silt, and sand left by flowing water in a river valley or delta; and, aeolian transport is when a material is shifted by the wind.)

From the late Palaeozoic Era to the late Mesozoic Era – c. 65 million years ago – this region was relatively stable. During this time, prolonged erosion of the landform led to the development of a low relief landscape over much of the hinterland of the Gippsland Lakes.

Australia began to separate from Antarctica, and east-west rifts developed across southern Victoria. In the south, a shallow depression developed along fault lines. This was the beginning of the Gippsland Basin.

Australia has moved north to its present position at the rate your fingernails grow. Since Captain Cook was here, Australia has moved another 20 metres north. Now, look out at the Southern Ocean and imagine how far Antarctica is from us - it gives you a better appreciation of the time scales involved here.

As you’ll read in the People Department, Tom Rich and Pat Vickers-Rich have been involved in the discovery and research of fossils near Inverloch from about 125 mya.

Our neighbourhood was still very active, as faulting and volcanic activity persisted. Lava flows infilled some valleys. Displaced freshwater streams began to cut into the less resistant sediments on either side of the lava flows. For instance, the Buchan and Timbarra Rivers are twin streams located either side of a relatively flat-topped basalt ridge. The Snowy River was probably diverted to the east by basaltic lava flows.

It was now that the present-day drainage pattern began to form.

Periodic tectonic uplift during the Paleogene Period rejuvenated streams in the highland regions leading to accelerated erosion and dissection of the highlands. The eroded material was dispersed and deposited in the Gippsland Basin. Marine sedimentation also occurred.

It was during this time the coal deposits of the Latrobe Valley were laid down. There are three coal layers interspersed with layers of non-marine sands and clays.

The Latrobe Valley has an estimated measured resource of close to 65 billion tonnes, which equals 25 per cent of the world's known brown coal reserves. Brown coal seams in the Valley are up to 100 metres thick with multiple seams often giving a nearly continuous thickness of up to 230 metres. That’s thicc!

Land uplift led to sea retreat and an increase in alluvial deposition due to stream rejuvenation.

Since those actions, earth movement and sea-level fluctuations have produced the current landforms of the Gippsland Plains region. Former shorelines can be seen where there are clear breaks in slope. Dune fields cover large areas of the coastal plains: for example, between Stratford and Bairnsdale.

River valleys were inundated during periods of higher sea levels and were infilled with sediments: e.g. the Snowy River, Orbost to Marlo.

During periods of lower sea levels, streams flowed out onto the bed of the emerged Bass Strait and sediment produced by the rejuvenated streams was deposited.

Subsequent sea-level rise led to the inundation of the southern section of the Gippsland lowlands. These flooded areas were progressively enclosed by sandy barriers built up from sediments moved onshore by marine action – hello to the Gippsland Lakes. Now, the rivers flowed into the lake system and tended to build silt jetty deltas as their sediment was deposited in the low energy environment – take a look at the Mitchell River silt jetties.

The oldest sandy barrier today exists only as remnants at Raymond Island and the Banksia Peninsula.

The last Ice Age (100,000–25,000 years ago) lowered sea levels by approximately 120 metres and Tasmania again connected to the mainland.

After a glacial period occurring between (100,000-25,000); the lowest sea level (lowered by approximately 120 metres) happened during the Last Glacial Maximum (22,000-18,000 years ago). Conversely, the maximum marine transgression – when the sea level rises relative to the land – occurred 7,000 years ago and the modern shoreline formed during this time.

Gippsland’s first peoples, the GunaiKurnai, are believed to have been living in the region from approximately 40,000 years ago.

The warmer post-glacial period melted ice sheets and raised sea levels. The land bridge was submerged again, and the Bass Strait was formed. At Wilsons Prom, the higher granitic masses became islands as the sea level rose. They were later interlinked by an accumulation of sediments of mainly marine and aeolian origin.

With the Holocene marine transgression (from about 15,000 years ago) the youngest barrier of the Gippsland Lakes system was formed enclosing the whole lake system – the Ninety-Mile Beach barrier system being the largest active barrier island system in Australia.