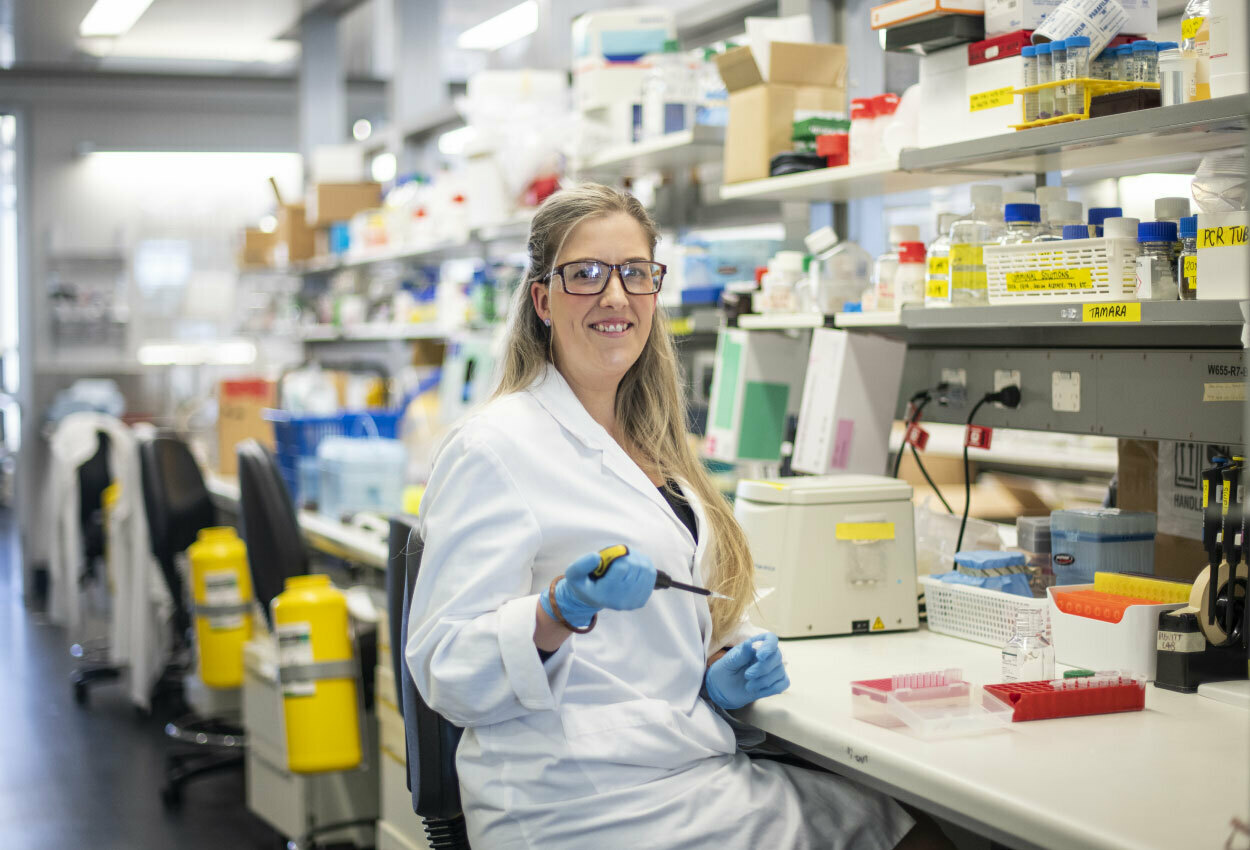 Gippslandia board meetings never fail to be enlightening. As we waited for our latest forum to kick-off, we stumbled across the ‘Macfarlane Burnet Room’ in the Latrobe City Service Centre and Library. Ordinarily, a council plaque wouldn’t pique our interest, but a reference to the Walter and Eliza Hall Institute (WEHI) grabbed our attention.

Recently, we had conducted the following interview with WEHI research assistant, Tamara Beck, who grew up in Stradbroke, a small farming community in between Sale and Yarram. Now, since learning about Sir Frank Macfarlane Burnet’s (‘Mac’) work pioneering research on bacteriophages and viruses at WEHI through the 1940s, 50s and 60s, we couldn’t help but chuckle at the coincidence of Gippsland having such a remarkable connection with the respected research facility — Mac and Tamara aren’t the only locals with links to WEHI either.

Tamara shares her route to the lab, educates us on epigenetics, and outlines some of the challenges she faces as she strives for new knowledge.

Gippslandia: Can you please describe your pathway to your current position?

Tamara: I attended Sale College where, thanks to an enthusiastic biology teacher, I became interested in science. I completed my undergraduate degree at La Trobe University, Bundoora, and majored in Zoology and Genetics.

I moved to Brisbane to do an honours year at QUT (Queensland University of Technology), studying the genetics of freshwater crayfish in the rivers of Papua New Guinea, to better understand how new species are made.

Upon completing my degree, I returned to Melbourne and became employed as a Research Assistant in the Molecular Medicine Division at WEHI, while also continuing post-graduate studies at the University of Melbourne. At the time I wasn’t planning on being a research assistant for so long, but I fell in love with the role, and for the last 12 years I’ve been privileged enough to work with some of the most driven and inspiring scientists in the field.

Through your time in high school and undergrad studies, how were your interests in science promoted and encouraged?

In the 90s there was a biotechnology boom, and I remember that really infiltrating my world, both through the media and in the classroom.

It was an exciting time: the world was arguing about cloning, the Human Genome Project was nearly complete, GMO (genetically modified organism) foods were on the horizon, and all that energy just catalysed and maintained my love for science.

Also, I had a high school biology teacher who shared the same passion for genetics, and he encouraged me to study science at a tertiary level.

My love of science continued to be supported and driven by energetic and enthusiastic lecturers at university, in addition to the passionate and like-minded peer group that I surrounded myself with.

Can you please describe the work of the team you’re involved with at WEHI?

I work with a team of very talented epigeneticists under the leadership of Professor Marnie Blewitt. We study how genes can be turned on or off by proteins called epigenetic modifiers.

Epigenetics is the study of heritable changes above and beyond that of the DNA sequence. It is often best described as studying the punctuation marks in a piece of writing: epigenetic marks are the additional formatting in the genome that allows your cells to understand, read and make sense of all the information. These marks tell cells when to activate or silence certain genes, or even when to shut down entire chromosomes so that the right genes can be expressed in the right places at the right time. When a gene is being expressed, it is making protein and it is these proteins that do all the work in a cell.

Our lab is trying to better understand this process and the role that epigenetic modifiers play in development and disease.

If we can better understand how genes are turned on and off via epigenetic mechanisms, we can exploit this information for therapeutic means. One example of this, and something that we are passionately working on, is the epigenetic regulator SMCHD1 and its involvement in the muscle wastage disease FSHD2. FSHD2 is a type of muscular dystrophy that leads to muscle weakness in the face, shoulders and arms of those affected. It most commonly presents in teenagers and young adults and although not fatal, it is a debilitating and progressive disease with no current targeted treatment.

In people with FSHD2, the gene SMCHD1 is faulty and it carries a mutation that stops it from switching off a gene that produces a toxic protein. This toxic protein then builds up and destroys the surrounding muscle tissues.

We are in the process of screening for drugs that will restore SMCHD1 activity in these individuals to treat or even prevent the disease.

There are many other diseases we are currently working on with hopes of taking the same approach of exploiting the epigenetic system to reinstate normal gene expression levels.

What are some of the pressures you face and what do you find rewarding about the work?

The laboratory experiments often have a high failure rate and you need to have the ability to bounce back and try again every day. Learning that a failed experiment is not a reflection of your scientific skills can be a big hurdle. There is always something to be learnt when experiments do not work, but it can be hard to remember that at the time, especially when we are waiting on the results for a publication or grant submission.

What the relentlessness means, however, is that the highs of getting a result and completing an experiment are incredible and they can sustain you through many more months of experimental battles at the bench.

The most challenging aspect for me is the rapid rate in which the science and technology we use in the laboratory changes. Nothing stays the same; there are very few techniques that I learnt in my early years that are still useful today. Methods of cloning, sequencing, isolating or visualising DNA and proteins change constantly, and it can be hard to keep up, especially when taking maternity leave or working part-time.

The dynamic nature of the job is challenging, but also rewarding. I’m always learning, I’m never standing still, and I never know what I’m going to be doing next!