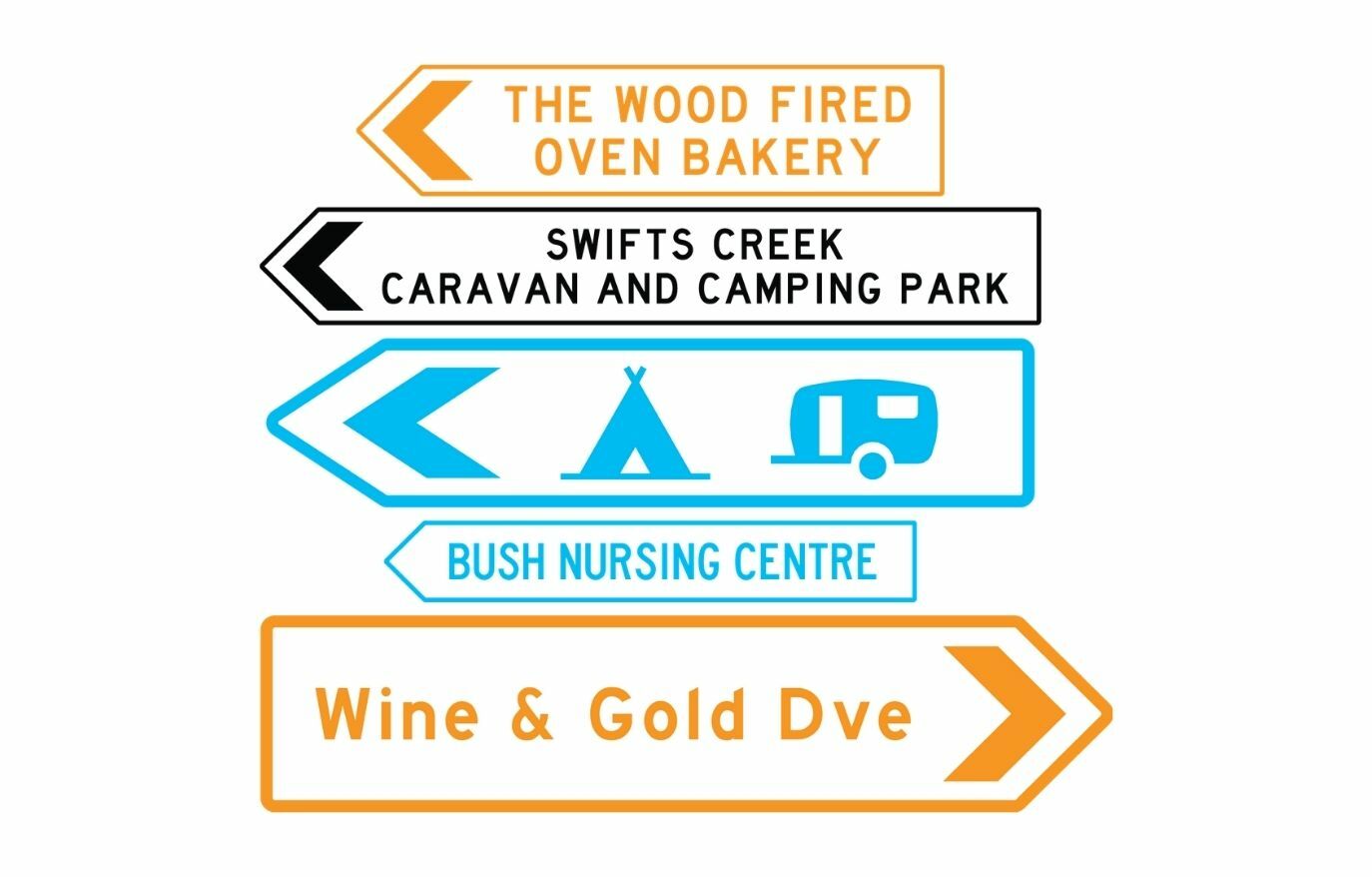 Spend time with Ray ‘Gags’ Gallagher and you’ll soon understand the importance of clubs to small towns, and the value of passionate people to the on-going survival of small clubs.

“I was born at the Omeo District Hospital and am just passing through Swifts Creek on the way to Ensay Cemetery,” chuckles Ray ‘Gags’ Gallagher.

Swifts Creek, with a population just shy of 300, sits at the confluence of the Tambo River and its namesake creek — reputedly named after a gold prospector who called the area home during the gold rush of the mid-1800s.

You’ll hear Gags call it ‘The Creek’ with a larrikin’s level of endearment that makes you want to head up there, with or without a paddle.

With the gold gone, the primary industries in the town today are timber, farming, education, the Bush Nurses Centre and the Department of Environment, Land, Water and Planning branch. It’s not surprising that Gags has been involved in more than one.

“You’ll hear Gags call it ‘The Creek’ with a larrikin’s level of endearment that makes you want to head up there, with or without a paddle."

“Dad’s family had a history of farming. He worked hard as a shearer and gradually obtained enough land to have a viable farm. The main source of income was from wool, but he also had crossbred sheep for their fat lambs and some cattle.

“I enjoyed helping on the farm, but when Dad passed away a bit of the fun went out of farming, so we downsized and got out of the wool part of the business.”

All of Gags’ schooling was completed in Swifts Creek and he attended what was then known as the Gippsland Institute of Advanced Education (GIAE) in Churchill. Although three hours away, Churchill was still close enough for Gags to return home for summer tennis matches and footy in the winter.

Gags highlights two formative events for his future career that happened while studying teaching at GIAE.

“I was very fortunate to have a lecturer: Al Box. Although he didn’t take me for many units, the way he conducted his lessons and his attitude to the education process had a big impact.

“In my last year of studies, three students from GIAE joined nine students from Frankston to head to Vancouver for a three-week teaching round and a three-week tour of the West Coast of America. Teaching in a low socio-economic area of Vancouver, where students came from many different cultural backgrounds, certainly opened the eyes of a young man from Swifts Creek, as did a lot of the things I saw on the West Coast.”

It was a Friday in 1983, and Gags was working in the cookhouse at the Cann River fires when he was told that he had best head home as he’d be starting as a teacher on Monday. His own prep teacher was still teaching at Swifts Creek; she’d now be his first principal.

Most of Gags’ 37 years teaching have been in Swifts Creek. He and his wife Kathleen’s four beloved daughters — Emma, Sarah, Meg and Josephine — have completed their schooling there too. Well, we hope not to jinx Josephine, who’s finishing year 12 there now. Remarkably, the girls were the fifth generation of Gallaghers at the school, as they had a relative who attended the first day of Swifts Creek Primary in 1874.

Although well aware of Gags’ love for footy, it was The Country Footy Prez podcast series by Lang Lang’s Chris ‘Brewy’ Brew that really brought Gags’ commitment to sport to the fore (and we recommend you search for this excellent series on grassroots football in Victoria). Gags shared that he first donned a jersey as a seven-year-old in the Under 16s side, made his seniors football debut at 14 and went on to play for the next 40 years, hanging up the boots at 53.

At the risk of sparking up some healthy banter in the Tambo Valley, we asked Gags for a couple of the best rivalries over the years:

“When I was younger the clashes with Ensay were always quite willing. One particular year, when they had a number of talented teachers playing, we were lucky enough to beat them by two points at Buchan (first semi-final). Some wag made a sign that read ‘Swifts Creek whopped Ensay’ for the teachers from Ensay to read Monday morning. It wasn’t really appreciated.

“Some wag made a sign that read ‘Swifts Creek whopped Ensay’ for the teachers from Ensay to read Monday morning. It wasn’t really appreciated."

“During the late 80s Swifts Creek and Bruthen both had good sides and quickly built up a rivalry at that time. Now, Swifts Creek and Omeo enjoy beating each other. Ex-Omeo President David Pooley has been quoted as saying, ‘I don’t care if we only win three games for the year, as long as they are the three games when we play Swifts Creek’. David Pooley is a good bloke, but obviously a poor judge of footy teams.”

Not to diminish his on-field exploits, but Gags is a long-time volunteer with both the Swifts Creek club and the local league, and is currently in his eighth year as President of the Omeo District Football and Netball League. In The Country Footy Prez, you gain a clear insight into Gags’ passion for the welfare of the clubs (“It took the heart out of Benambra when footy left”), as well as the players, as his voice crackles slightly when talking of a young lad with serious health issues. Spend time with Gags and you’ll soon understand the importance of clubs to small towns, and the value of passionate people to the ongoing survival of small clubs.

“Many of the clubs in our league rely on players travelling to the area to assist their teams. A number of them simply wouldn’t exist without them. As with many small towns, young people have to leave to pursue further studies and careers.

“These days there are limited opportunities in the timber industry. Many government services, such as the SEC and Telecom, have long since gone from the area. Banks, real estate agents and the like have mostly disappeared. In addition, farms have got bigger and are less labour-orientated.

“For a small town, we do have good facilities, including a well-maintained 25-metre pool, a highly rated nine-hole golf course, the lawn bowls club and a Bush Nurse Centre that provides excellent healthcare.”

Gags adds that the Internet has enabled a small number of people to operate successful businesses from Swifts Creek, but that as we all become more reliant on technology for education, work and recreation, conductivity speeds and reliability are more important than ever.

“Josephine is doing two subjects by distance education this year and, as such, had a meeting scheduled with her teacher to discuss issues that she had with her work, but, despite the best efforts of the school, contact couldn’t be established or maintained. Thus 50 minutes of the very limited time she is allocated couldn’t be utilised. Recently, the High Country was without a web or mobile connection as someone had dug up a cable that they should have. The powers-that-be are keen for things such as NAPLAN (National Assessment Program – Literacy and Numeracy) to be done online. I’m tipping this will not give our students an advantage over their city counterparts.”

Gags doesn’t seem inclined to dwell on the negatives, but instead returns to the upsides of life in The Creek and what could be done to improve the prosperity of the town. After all, it’s the local families, both pioneer families and new arrivals, and others that are stewards of their region. Each generation contributes to the community.

“It’s the local families, both pioneer families and new arrivals, and others that are stewards of their region. Each generation contributes to the community."

“The local government appears to be taking interest in Swifts Creek at present — more than I can ever remember... Their thinking on community assets that aren’t on Shire land, such as our great little swimming pool and the rec reserve, over recent years has been much more supportive of the hardworking volunteers trying to keep these venues up to standard. The Shire also employs a small team that does a great job keeping the area’s towns looking ‘schmicko’.

“The closing of many timber mills in the area certainly has knocked towns around. For decades the forestry industry and the mills, particularly the Ezards, worked together to manage the bush well. Everything was planned around what I think was an eighty-year cycle and there were always vast areas of healthy, vibrant bush at all stages of development.

“It’s been replaced largely by a ‘lock-it-up’ mentality. Whilst this can sound good, it leads to the bush becoming overgrown. Next thing there’s an out-of-control bushfire that destroys the trees, kills thousands of animals and endangers us all [Gags is a CFA member — Ed.]. This is an example of policies made by people who aren’t directly affected by them, or to appease people who aren’t affected by the decisions — this can have unfortunate and unforeseen outcomes.”

Gags adds a sentiment shared by many in the region and one that reiterates his passion for the community’s future.

“As our population continues to be more centralised in cities, the country electorates are getting larger so there are less politicians representing country people in our parliaments. Even though, in my opinion, we have excellent politicians representing us at both federal and state level, it is hard work getting city-centric politicians and bureaucrats to fully understand the issues we face. Particularly when they don’t take the trouble to come and find out what is going on.”

In penning these profiles, one aim is to gain more insight on the subject through the limited time you have together. You note how fondly he speaks of his daughters and the shift in tone when highlighting political shortcomings, but there was one tale that spoke volumes: in 50 years of football, Gags’ most treasured moment was presenting premiership medallions to his fellow teammates.