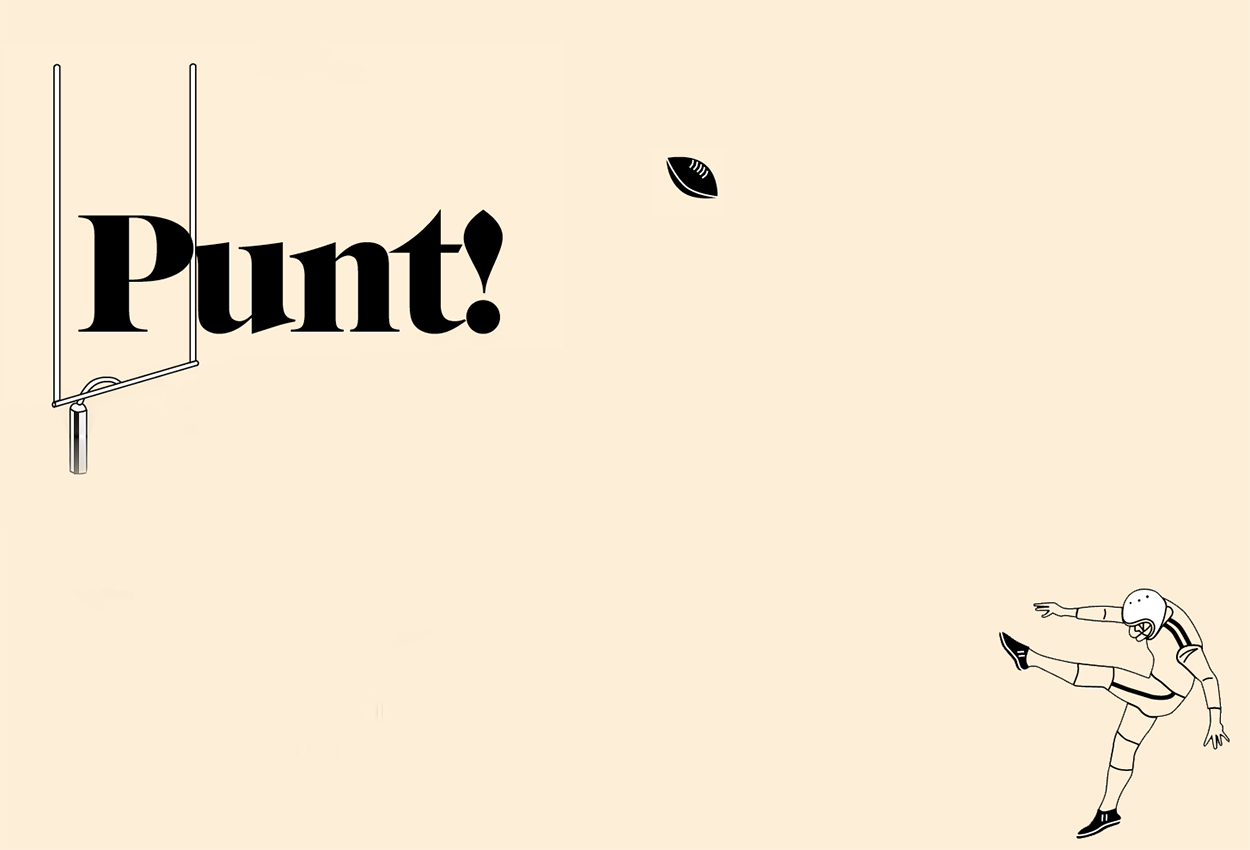 Right before his first college game, Tom Hutton talks about making the big move to the US for football.

Billy Madison was 27 years old when he famously went, “…back to school, to prove to Daddy that he’s not a fool”. This famous, fictional mature-aged student was fun-loving, up for a challenge and definitely the life of the party. Tom Hutton isn’t the son of a billionaire (that we know of ), but as a 29-year-old he’s returning to school. Just like Billy, he’s chasing his dream, with the support of a beautiful woman by his side, his wife Kelsey.
—

The joys of technology, where the distance between Oklahoma, USA and Gippsland is now only the width of a keyboard, allowing me to catch-up with my old friend and premiership teammate over a few texts and emails. Tom’s enjoying the final exams after his first year at Oklahoma State University where he’s a freshman after receiving an athletic scholarship with their college football side. Tom’s a punter. This doesn’t mean he’s throwing down bets constantly, but rather that he receives the ball directly from the scrimmage and then punts (kicks) the football to the opposing team to limit any field position advantage.

That’s a pretty big deal (even if punters aren’t, but don’t tell them that). The average attendance at home is more than 56,000 people, while several of the away games boast average (yes, average!) crowds of over 100,000 people. That’s more than an AFL Grand Final!

In my mind, how does a guy living in Newborough, working at Australian Paper and playing football for Yallourn Yallourn North not only figure out that he can kick an American football, but also impress a college thousands of miles away so much with his abilities that they offer him a scholarship?

To put my curiosity at ease, I chatted with Tom and asked him all the tough questions.

Tom, when did you decide you wanted to become a professional punter in the NFL?

The NFL wasn’t initially at the forefront of my mind. I’d heard about a great opportunity that exists for (predominantly) Aussie Rules players. I contacted Nathan Chapman, who runs Prokick Australia, to find out more.

Learning that I was academically eligible, I then knuckled down and trained to make sure I was competent in punting the ball, as it’s a fairly different technique to our normal Aussie Rules punts. Then I was lucky enough that Oklahoma State University saw some of my YouTube footage. They got in contact, and I was offered a scholarship a few weeks later.

What were you doing at the time you made your decision?

I was actually working at Australian Paper and was feeling quite unfulfilled with what I was doing in life. My position was really secure and I was earning a good wage, but it wasn’t a job that was challenging me. I wasn’t doing anything productive with my time off. I felt like I was really just going through the motions day-to-day.

I love my Aussie Rules footy, but even that was becoming more of a tradition to play every year, rather than something I was really driven to do. I began to look for new challenges and that’s when I came across Prokick through a post on social media.

Tell us about the sacrifices required, from the moment it became a possibility, to the offer, to moving overseas and how exciting/daunting/scary that may have been.

The first tryout session was in mid-December 2017. The day was about 38 degrees and I was actually going to ditch it because I couldn’t be bothered driving to Melbourne and training in the heat. But when I told that to my wife, Kelsey, she reminded me that ‘I can’t be bothered’ is one of my typical excuses that got me in this position of dissatisfaction in the first place.

So I went. After the session, Nathan and John Smith of Prokick Australia made it clear to me that I had the potential to gain a scholarship. I went home and talked it through with Kels, and she was super supportive straight away and told me to go for it.

For the next 13 months, before I moved to the States, I’d drive to Melbourne up to three times a week for training, including a 6:30 am session every Sunday.

The actual moving part probably didn’t really hit me until I got on the plane. We had been so busy organising our fast-tracked wedding, packing up the house, getting people to rent our house, obtaining our visas etc. that I hadn’t really had time to sit and get nervous until it was too late.

A low number of college players make the NFL, but typically Aussies have fared well in the punting game. How do you rate your chances?

Yeah, it’s really tough. The NFL is not a priority for me at all right now. My football priority is to first win the starting spot on my team and go from there. I’m realistic, it‘s a long shot for anyone to make the NFL, so I’m putting more emphasis on getting on my degree and ensuring that I come out of my four years of college with something to show for it.

Tell us about college life: what’s it like to be back studying again, so many years after finishing school? What are you studying?

I’m really enjoying it. Sometimes it can be tough to balance everything, but we get great support from our coaches, academic advisors and tutors. This made it a fairly seamless transition back into studying.

I’ve just completed my first semester. I began studying Sports and Coaching Science, but I have changed my major to Construction Project Management. I’ve been a carpenter and worked in construction for about 10 years, so I’ve already got experience and interest there.

What does the average week look like from a study/training perspective?

Our training varies depending on the time of the season, but we’re involved in some sort of football training for 11 months of the year. Winter workouts are probably the equivalent of November pre-season training in an Aussie Rules context.

During winter, my days commonly consisted of a gruelling 90-or-so minute gym workout at 6:30 am, and then I’d go to my classes for the day. At around two or three o’clock we’d go to our indoor training field and do our running for the day. We’d do this four days a week, with only Wednesdays off. We will also have team meetings, position meetings, review game film, etc. It can get pretty full-on with some long days.

Are you the old man on campus?

[Laughs] You already know the answer to that! There are some older students, but I’m definitely the oldest student-athlete. I’m actually older than a lot of my coaches, which is pretty funny! At 29 I’ll be one of the oldest ever freshmen in Division 1 Football. I’m fairly young at heart though.

What are some of the notable differences in American or college sport to here?

The fans are fanatical. Not that Aussies aren’t, but it’s not uncommon for a college football game to have 100,000 people attend, plus another 100,000 tailgating in the parking lot.

Our stadium holds about 57,000 people and it’s full for every game. We had an open training session and there were 15,000 fans there. It’s crazy. Everywhere you look in town something is painted with our OSU orange, everything is ‘Cowboy’ this and ‘OSU’ that. Americans take it to a whole other level.

As a self-assessment, where do think you’re at?

The team is about to go on holidays, but I’m staying to take an extra class and do more work on my punting.

Statistically, I’m punting at a fairly high level, but I’m not satisfied with where I’m at. Honestly, I hopefully never will be.

How bizarre is your current situation for you?

It was crazy at first, but once I got over here I really sank into a sense of normality about it. The people are all very accommodating and really make Kels and I feel at home. I’d never even touched an American football 18 months ago, and now I’m living on the other side of the world because of it.
—
Having known Tom for several years, I know that he’s got immense talent and can achieve incredible things when he sets his mind to it. Tom was a vital member of Morwell’s back-to-back premierships in 2013–14 in the Gippsland League, made the Team of the Year in 2014, won League Best and Fairest in Mid-Gippsland in 2015, and was named Interleague Captain and Team of the Year in Mid-Gippsland in 2012,15,16 and 17. It feels like Tom’s story is just beginning.

Yet Tom isn’t the only Gippslandian we’ve had in a college football program. Recently, Maffra superstar Hayden Burgiel had a go, Dane Roy plays for the University of Houston and currently Jordy Sandy of Traralgon, who went through Prokick with Tom, is on a scholarship too. Who will become the first Gippslandian to play in the NFL?

Time will tell, but it’s worth a punt.