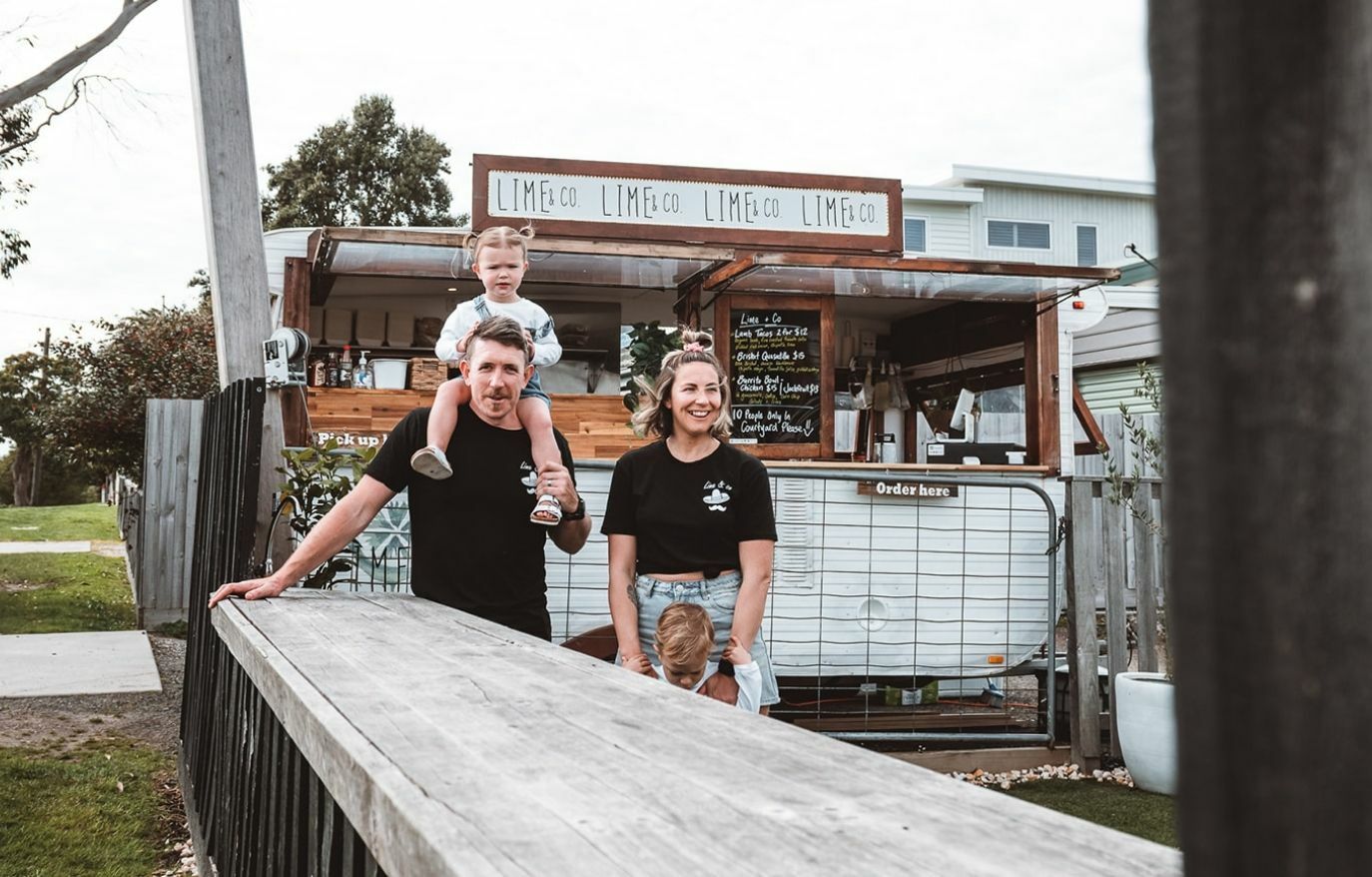 The phrase ‘family business’ is literal for the Toomey family as they serve holidaymakers and locals alike from their repurposed caravan in Inverloch.

It has been said that our senses of smell and taste are the closest link to the evocation of memories. Bypassing the thalamus and heading straight to the olfactory bulb, these senses can be responsible for triggering a vivid memory or a wave of uncontrolled emotion. Or so I have read…

I think we can all agree that our nostalgia of childhood may be at its strongest when it comes to the sensory customs of summer. For instance, the smell of sunscreen or the feel of salty skin after a day spent by the ocean. And so many childhood memories are entangled with the rituals of what we ate during our sweltering summers.

There will be, I am certain, a generation of holiday makers on Gippsland’s south-west coast whose summers spent by the beach will be framed by the licking of chipotle mayo from their fingers, devouring paprika spiced meats and inhaling spoonfuls of guacamole from colourful ohana bowls thanks to Lime & Co.

Marcus and Nikya Toomey of Lime & Co have been the purveyors of Mexican cuisine in Inverloch and surrounds for almost three years now, serving holidaymakers and locals alike from their family-operated, repurposed caravan.

The phrase ‘family business’ is literal — Nikya might take your order and Marcus might prepare it. Would you like some cutlery? Sure, their kids Coen and Willow might (endearingly) hand that down to you from the van’s pass.

Inverloch is characterised by her perfectly contrasting inlet and surf beaches, curved walking tracks and a town centre just a stone’s throw from the water’s edge. The town has a growing population, as an increasing number of sea changers seek out coastal real estate with proximity to Melbourne, where the beaches are unspoiled and the summer tourist influx is still manageable.

Having grown up in South Gippsland, it was a love of the ocean that lured Nikya and then fiancé Marcus back to Inverloch. Fittingly, the couple found each other in hospitality while working by the water at Perth’s Breakwater restaurant. “It all happened very quickly for us”, Marcus explains. The pair headed back toward Melbourne after a marriage proposal and then on to Inverloch shortly after discovering they were expecting their first child. Having an existing family network in South Gippsland “was a big influence on moving here”.

“I needed to be by the coast,” Marcus explains. “We’re outdoor people.”

“any chance to sit at the beach, walk our dog, exercise and just play outside in the sun — we will do it”

It has been a prominent fixture for them and a part of daily life. In the rare moments when work commitments are not dominating, you’re likely to find them by the water.

“We usually start our day with coffee and a run, and then an adventure with our two gorgeous children.” In fact, “any chance to sit at the beach, walk our dog, exercise and just play outside in the sun — we will do it”.

The salty, sandy life might have been the initial drawcard for coastal Gippsland, but it is the support and friendships found in the local community that truly create a sense of place for this family. 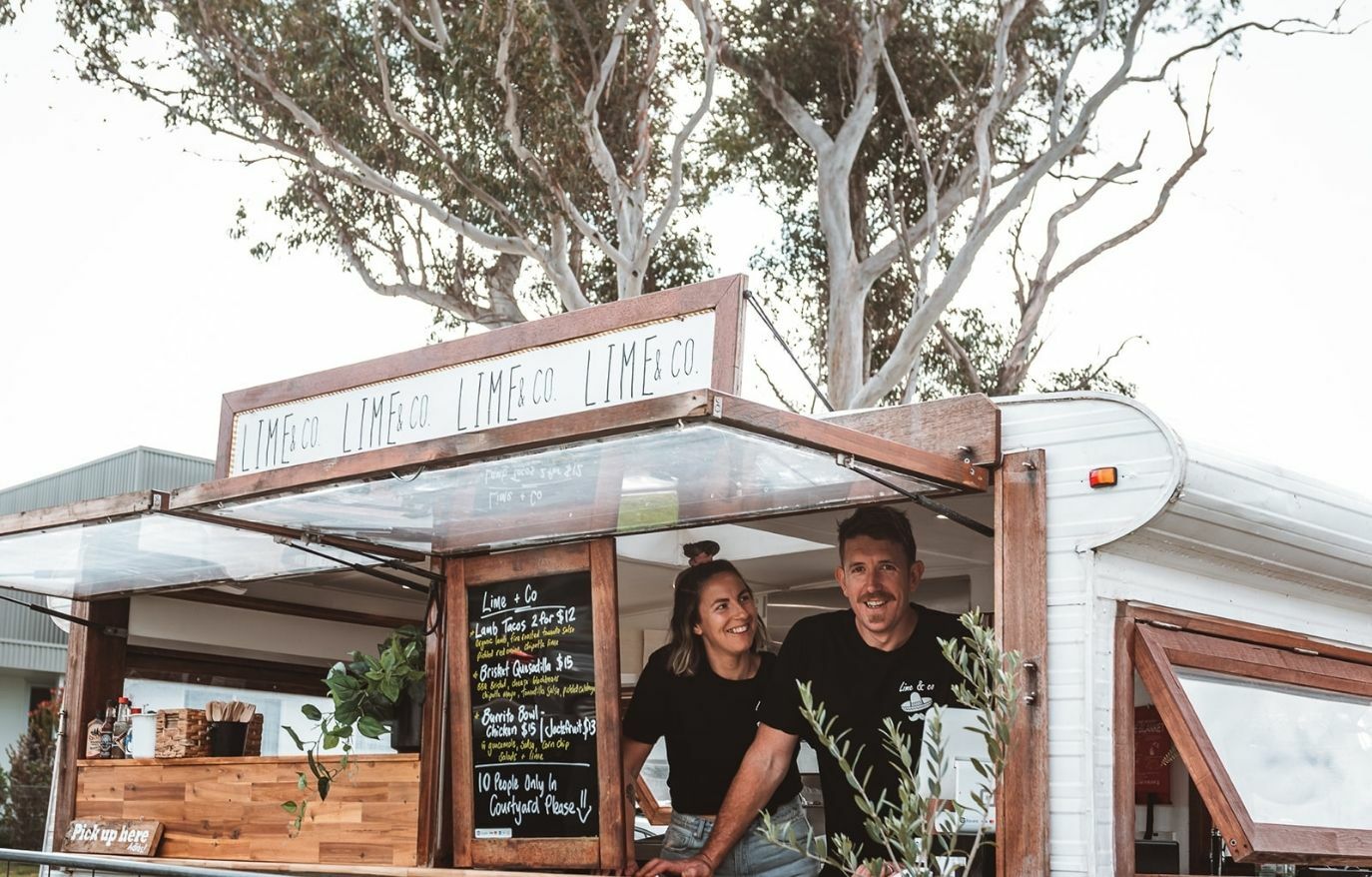 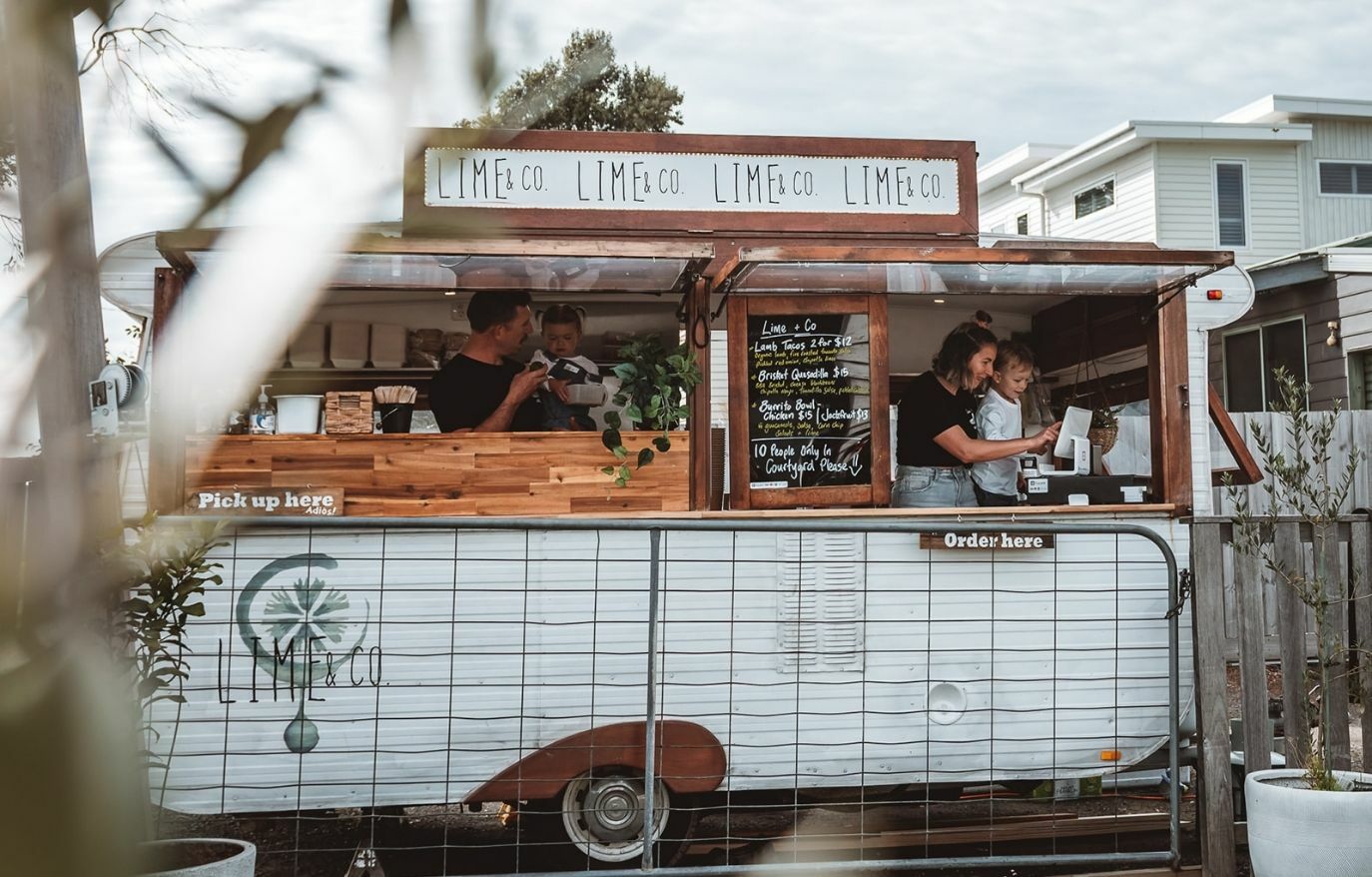 “We love the local spirit… raising children in a community was something we are both extremely passionate about,” shares Nikya. It was important to Marcus and Nikya that their children were raised in a close-knit town and Inverloch has proved perfect for this.

“Since having kids we’ve made some beautiful, lifelong friendships down here,” continues Nikya.

After settling here, the pair identified a gap in the market for a catering-style food truck business in the area. When first launching Lime & Co they were overwhelmed by the support of the town.

“The support we’ve received from other local businesses for Lime & Co has been unreal,” says Nikya, and they were inundated with demand for their locally sourced Mexican menu at their Inverloch Farmers Markets debut in 2018.

Cooking under a flimsy gazebo on a BBQ, they struggled to keep up with the queues. “We got smashed and were blown away with the response,” chuckles Marcus. A demand that is ongoing, not only for the Lime & Co menu but also for the new ventures entering the scene (bicycle-delivered sourdough, anyone?).

Now it is other similarly small business entrepreneurs that are being embraced by Marcus and Nikya, who want to see more people have a crack, just like they have. “No matter what you go for,” Marcus explains, “the locals will jump on board”. There is a passion and perseverance played down by the Toomeys that I feel contributes to the success of Lime & Co, but there does seem to be a collective community goal in Inverloch to inject vibrancy into the town. 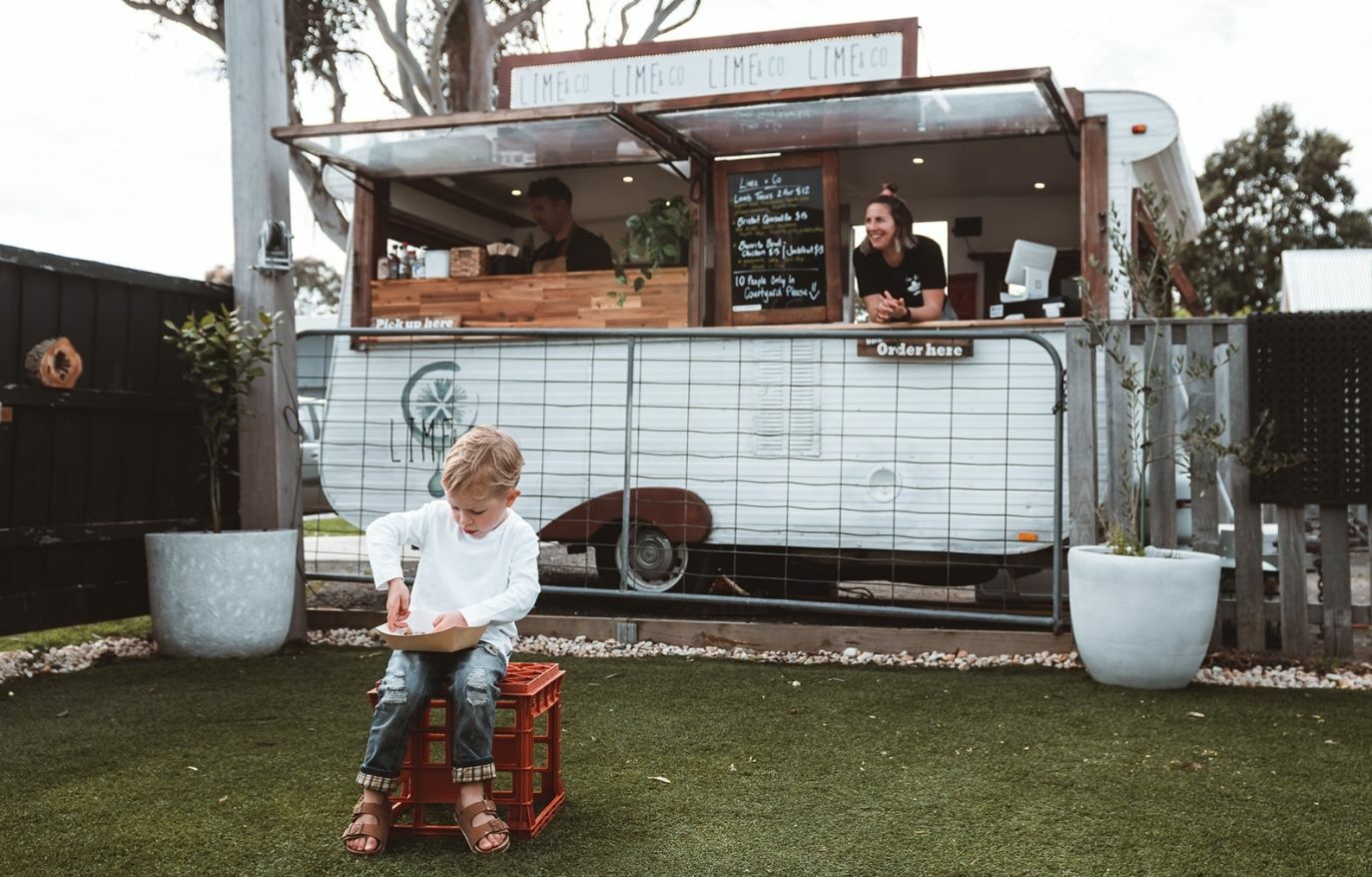 Marcus and Nikya have adapted heroically to the trials of 2020. With the success of delivered ‘Lime & Co @Home Meals’ already in motion, they were able to maintain an existing customer base.

“We were lucky to have started our @Home Meals concept last winter, so we continued these during the Covid-19 restrictions, and they became our main income”.

The pair also introduced a range of pre-prepared, calorie counted meals for the health conscious that tied in with their Eight-Week Challenge, “which are very popular and something we are looking into extending in the future” says Marcus.

In addition, The Local, a beloved Inverloch café, generously opened their courtyard space to house the Lime & Co caravan, enabling them to trade throughout the toughest of lockdown restrictions.

This arrangement works well for the caffeine lovers, says Nikya. “We are coffee fanatics” and when it comes to coffee in Inverloch, “the Local is a must”.

In such difficult times for the Victorian hospitality and tourism industry, it is the creative, collaborative and proactive responses demonstrated here that have kept the flicker alight in Gippsland.

Behind the scenes for the Toomey family is possibly one of the most exciting undertakings for the business: the opening of a Mexican cantina in town. The bricks and mortar restaurant, found in the A’Beckett St Arcade, will serve takeaway Mexican-style street food, with the option for dine-in as soon as Victorian restrictions allow.

“We are thrilled with our design and our menu,” Marcus enthuses. “Get excited!”

“We are coffee fanatics” and when it comes to coffee in Inverloch, “the Local is a must”

This vivacious family are eager to get this restaurant up and running. “We can’t wait to showcase what our region has to offer and keep all the tourists and locals happy with our tasty goodness.” Although the Toomeys are planting their feet on the ground with the cantina, the caravan will still play an important role in maintaining the flexible aspect of business that Gippsland has come to love.

Due to open in time for summer, these memory makers are set for another season of ritual and placemaking for those lucky enough to find themselves in this part of the world.