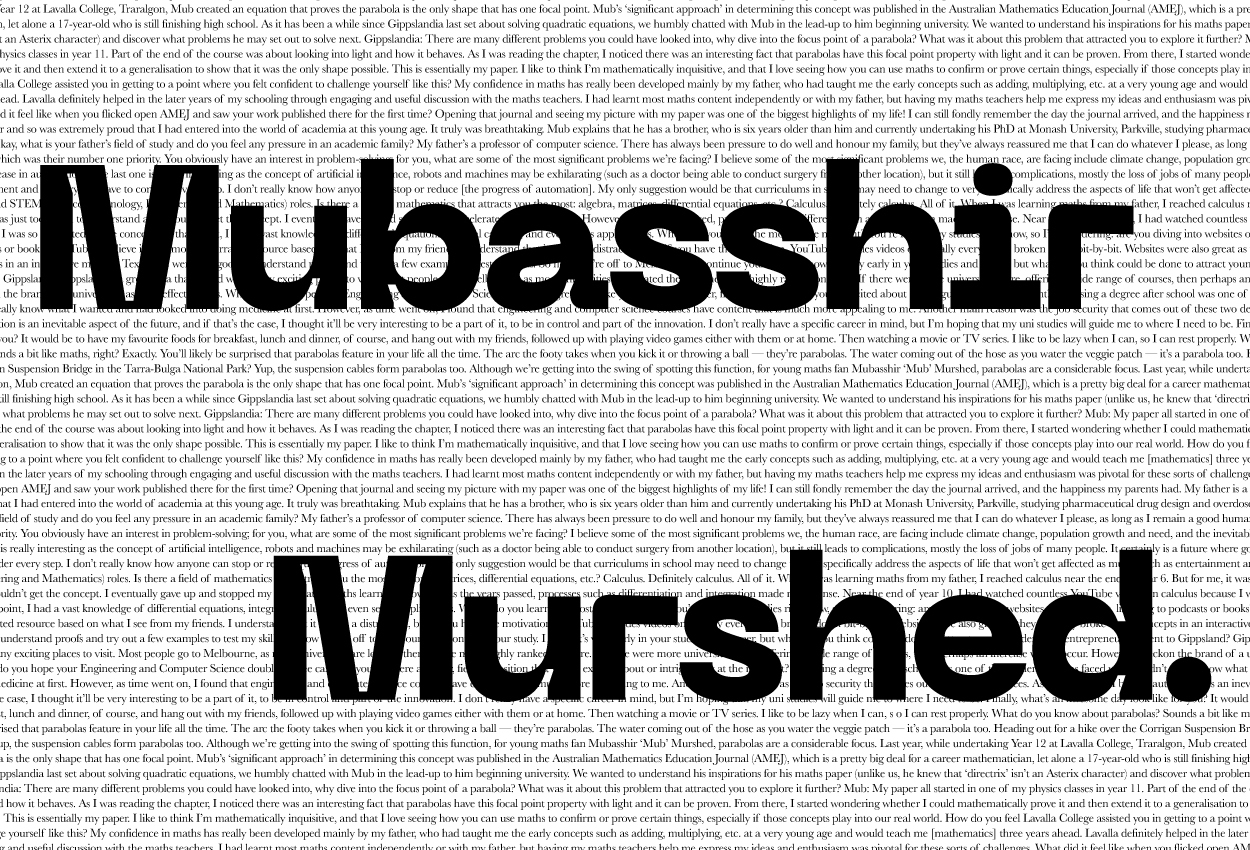 What do you know about parabolas? Sounds a bit like maths, right? Exactly. You’ll likely be surprised that parabolas feature in your life all the time. The arc the footy takes when you kick it or throwing a ball — they’re parabolas. The water coming out of the hose as you water the veggie patch — it’s a parabola too. Heading out for a hike over the Corrigan Suspension Bridge in the Tarra-Bulga National Park? Yup, the suspension cables form parabolas too. Although we’re getting into the swing of spotting this function, for young maths fan Mubasshir ‘Mub’ Murshed, parabolas are a considerable focus.

Last year, while undertaking Year 12 at Lavalla College, Traralgon, Mub created an equation that proves the parabola is the only shape that has one focal point. Mub’s ‘significant approach’ in determining this concept was published in the Australian Mathematics Education Journal (AMEJ), which is a pretty big deal for a career mathematician, let alone a 17-year-old who is still finishing high school.

As it has been a while since Gippslandia last set about solving quadratic equations, we humbly chatted with Mub in the lead-up to him beginning university. We wanted to understand his inspirations for his maths paper (unlike us, he knew that ‘directrix’ isn’t an Asterix character) and discover what problems he may set out to solve next.

Gippslandia: There are many different problems you could have looked into, why dive into the focus point of a parabola? What was it about this problem that attracted you to explore it further?

Mub: My paper all started in one of my physics classes in year 11. Part of the end of the course was about looking into light and how it behaves. As I was reading the chapter, I noticed there was an interesting fact that parabolas have this focal point property with light and it can be proven. From there, I started wondering whether I could mathematically prove it and then extend it to a generalisation to show that it was the only shape possible. This is essentially my paper.

I like to think I’m mathematically inquisitive, and that I love seeing how you can use maths to confirm or prove certain things, especially if those concepts play into our real world.

How do you feel Lavalla College assisted you in getting to a point where you felt confident to challenge yourself like this?

My confidence in maths has really been developed mainly by my father, who had taught me the early concepts such as adding, multiplying, etc. at a very young age and would teach me [mathematics] three years ahead.

Lavalla definitely helped in the later years of my schooling through engaging and useful discussion with the maths teachers. I had learnt most maths content independently or with my father, but having my maths teachers help me express my ideas and enthusiasm was pivotal for these sorts of challenges.

What did it feel like when you flicked open AMEJ and saw your work published there for the first time?

Opening that journal and seeing my picture with my paper was one of the biggest highlights of my life!

I can still fondly remember the day the journal arrived, and the happiness my parents had. My father is a professor and so was extremely proud that I had entered into the world of academia at this young age. It truly was breathtaking.

Mub explains that he has a brother, who is six years older than him and currently undertaking his PhD at Monash University, Parkville, studying pharmaceutical drug design and overdose.

Cool. Okay, what is your father’s field of study and do you feel any pressure in an academic family?

My father’s a professor of computer science. There has always been pressure to do well and honour my family, but they’ve always reassured me that I can do whatever I please, as long as I remain a good human being, which was their number one priority

You obviously have an interest in problem-solving; for you, what are some of the most significant problems we’re facing?

I believe some of the most significant problems we, the human race, are facing include climate change, population growth and need, and the inevitable increase in automation. The last one is really interesting as the concept of artificial intelligence, robots and machines may be exhilarating (such as a doctor being able to conduct surgery from another location), but it still leads to complications, mostly the loss of jobs of many people.

It certainly is a future where government and industry will have to consider every step.

I don’t really know how anyone can stop or reduce [the progress of automation]. My only suggestion would be that curriculums in school may need to change to very specifically address the aspects of life that won’t get affected as much, such as entertainment and STEM (Science, Technology, Engineering and Mathematics) roles.

Is there a field of mathematics that attracts you the most: algebra, matrices, differential equations, etc.?

Calculus. Definitely calculus. All of it. When I was learning maths from my father, I reached calculus near the end of year 6. But for me, it was just too tough to understand and I couldn’t get the concept. I eventually gave up and stopped my accelerated maths learning.

However, as the years passed, processes such as differentiation and integration made more sense. Near the end of year 10, I had watched countless YouTube videos on calculus because I was so fascinated by the concept. At that point, I had a vast knowledge of differential equations, integral calculus, and even series applications.

Where do you learn the most at the moment? You’re not in any studies right now, so I’m wondering: are you diving into websites out of interest, listening to podcasts or books?

YouTube. I believe it’s the most underrated resource based on what I see from my friends. I understand that it can be a distraction, but if you have the motivation, YouTube provides videos on literally every topic, broken down bit-by-bit. Websites were also great as they critically broke down concepts in an interactive manner. Textbooks were also good to understand proofs and try out a few examples to test my skills.

So now you’re off to Melbourne to continue your study. I know it’s very early in your studies and career, but what do you think could be done to attract young academic or entrepreneurial talent to Gippsland?

Gippsland is a great area that’s filled with many exciting places to visit. Most people go to Melbourne, as most universities are located there or the more highly ranked ones are. If there were more universities here, offering a wide range of courses, then perhaps an increase would occur. However, I reckon the brand of a university has a big effect on this.

Where do you hope your Engineering and Computer Science double degree can take you? Is there a career, field or position that you’re excited about or intrigued by at the moment?

Choosing a degree after school was one of the challenges I was faced with. I didn’t really know what I wanted and had looked into doing medicine at first. However, as time went on, I found that engineering and computer science courses have content that is much more appealing to me. Another main reason was the job security that comes out of these two degrees. As I pointed out, I believe automation is an inevitable aspect of the future, and if that’s the case, I thought it’ll be very interesting to be a part of it, to be in control and part of the innovation. I don’t really have a specific career in mind, but I’m hoping that my uni studies will guide me to where I need to be.

Finally, what’s an awesome day look like for you?

It would be to have my favourite foods for breakfast, lunch and dinner, of course, and hang out with my friends, followed up with playing video games either with them or at home. Then watching a movie or TV series. I like to be lazy when I can, so I can rest properly.