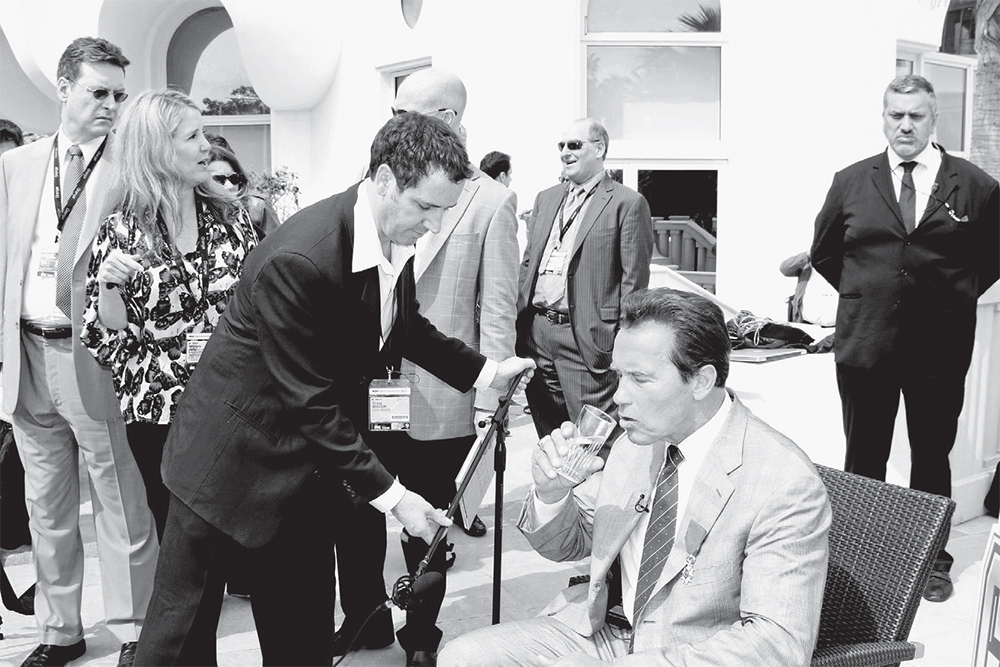 Craig Mason would be the last person to say his motivation has been to make a difference for those most in need. Even the idea of being put on very small pedestal doesn’t sit well with the man. Yet by volunteering and working in some of the world’s poorest nations, often in active war zones, and then creating local economic opportunities as those countries embark on their post-war rebuilding effort has definitely made a difference for all involved.

Craig Mason would be the last person to say his motivation has been to make a difference for those most in
need. Even the idea of being put on very small pedestal doesn’t sit well with the man. Yet by volunteering and working in some of the world’s poorest nations, often in active war zones, and then creating local economic opportunities as those countries embark on their post-war rebuilding effort has definitely made a difference for all involved.

It’s hard to imagine it’s sheer coincidence, but then Craig’s story is as much about entrepreneurialism as it is altruism. It’s a journey that’s turned the process of seeking varied experiences of the human condition and building creative and business opportunities from his experiences, into an art form.

It turns out it’s possible to volunteer for Mother Theresa for a year, deliver aid behind enemy lines in mid-winter Balkan nations, and build your own creative communications agency (that includes interviewing some of the world’s best-known actors, filmmakers and CEOs, creating music videos, and most recently, stunning tourism campaigns reproduced by Lonely Planet and National Geographic) by being both altruistic and an entrepreneur. Not bad for a boy from Morwell – unless we consider that maybe Morwell, both then and now, is just the right sort of place to grow into anything, adaptable to anywhere.

Born in Yallourn, and growing up in Church Street, Morwell. Craig, now 47, remembers happy years with his parents and two brothers, attending Collins Street Primary School and Morwell High School. After finishing high school in 1987, Craig applied, on ‘a whim’, to be a Rotary Exchange Student, which saw him packing up his bags and heading off to Finland. The process had begun.

Fast-forward 10 transformative years and a vast set of demanding, rich and sometimes life-threatening experiences had unfolded – the forthcoming tales on delivering global aid in the turbulent 1990s ripe for a
fascinating memoir.

After backpacking through Europe, including entering Soviet Russia just before the USSR collapsed, Craig returned to Australia to study history and political science at La Trobe University. Upon graduating, a fundraising stint in Coolgardie driving 80-tonne mining trucks followed, which was undertaken while living with an Aboriginal family and volunteering in the local Aboriginal school.

Next a one-way ticket to India led to what Craig describes as his most transformative year. Living in Calcutta, in incredibly basic conditions, while volunteering in one of Mother Theresa’s hospices, serving the poorest of the poor.

When his visa extension was rejected, Craig moved to Vienna, volunteering in the Traiskirchen refugee camp, where he first met families from Bosnia-Herzegovina fleeing the third Balkans War. After six months, and wanting to do more, Craig jumped on a train to Zagreb and saw his Coolgardie mining truck experience put to use. Craig spent the mid-winter partnering with a German guy, he describes as crazy, driving a multi-coloured bus into mountain regions the UN wouldn’t go; delivering food and aid while dodging bullets, grenades and crazed warlords. Maybe the German wasn’t the only crazy guy driving the truck…

As the war entered a new phase, and feeling his nine lives might be starting to be used up, Craig returned to Australia intending to settle down. However, six weeks later World Vision called, seeking assistance with the emerging humanitarian crisis in Rwanda and Congo. This led to seven months in a response team with diminishing security and team member kidnappings – to the point that a Congolese warlord put a price on Craig’s head ($2000 – a bit disappointing!).

He was evacuated and sent to Northern Azerbaijan to distribute food to displaced persons from the Nagorno-Karabakh conflict. In the summer of 1995, Craig was flown in when Srebrenica fell to Serb armed forces resulting in the massacre of 8000 men and boys, and more than 30,000 refugees fleeing to the small town of Tuzla, Bosnia and Herzegovina.

Based in Bosnia, Craig set up his own Non-Government Organisation (NGO) with a Norwegian colleague, which grew quickly to having 25 staff and significant funding from organisations such as the European Union and the United Nations. After a few years, Craig worried they were now part of the problem – enabling long-term dependence on external funds within communities that desperately needed to rebuild their own economic capability to be sustainable long-term.

The NGO was gradually transitioned over to others and Craig headed to France for a break, complete his MBA and plan what to do next. Formulating a transition from the frontline, volunteering in the service of others, to businessman and entrepreneur.

The drive to return to Bosnia and do something beneficial, from scratch, was strong. Thus, Novagenus was born: a creative communications company based in Bosnia, telling stories in film and online about people, places, and the human experience. Ironically, Craig founded new business in a Balkan coal-mining city, its landscape dominated by a large power plant. A subconscious connection with his past? Craig concedes he felt at home seeing the tall chimney stacks and cooling towers.

So why create a creative company based in an industrial city recovering from a devastating war? Craig is a believer in human potential – he saw something in the city’s young people that made him want to place a bet. When Craig first left Australia, Morwell seemed far removed from the rest of the world. Today, technology allows you to live anywhere, including country towns; if you’re creative, smart and willing to work hard, you can bring the world to you. Craig sees parallels with Gippsland and the opportunities to start afresh.

In Bosnia, his company has partnered with the Sarajevo Film Festival, a festival that started in a small basement during the war and has become one of the largest and most important film festivals in Eastern Europe. For Craig, the success of the Sarajevo Film Festival is a lesson that great things can be built from scratch, no matter your location or your starting point.

Working with a talented team of young people, Novagenus has created chart-topping music video, assisted regional governments in developing a stunning tourism campaigns, and interviewed many of the world’s biggest stars.

So what is it like interviewing stars such as Angelina Jolie, Robert De Niro, Morgan Freeman and Arnold
Schwarzenegger? Craig tries not to be over-awed. They’re just people, albeit, successful and talented ones. For Craig, the success of an interview often depends on how constrained the actor is by their Public Relations people. He’s found some of the biggest stars the most natural and cites Angelina Jolie, whom he has interviewed twice, as one of the most interesting. Craig tries not to be too scripted, asking questions that he’s interested in and most importantly listening to the answers. He maintains focus on the guest, removing himself from the interview process. Film-makers are Craig’s favourite subjects to interview – their intelligence, creativity and diverse skillset make for fascinating conversations

After many interesting projects, and Novagenus’ on-going success, Craig and his family recently moved permanently to France to settle their young children into school and transition into a new professional phase. True to form, Craig’s following his nose as he works out what will be next. The skills and perspective gained in issuing war relief and post-war recovery, followed by creating and growing Novagenus, suggest a third phase filled with promise. He has a sense of wanting to go back to his earlier years, focusing on contemporary issues that matter to him. Recently spending time at Syrian refugee camps in the Middle East tells means there are more stories to come. Even with his impressive skill set, Craig’s always learning.

Craig is fascinated by the role the Internet and social media are playing in our lives. It holds the potential to both inform us and spread misinformation. How do we harness the positive potential of technology and yet deal with the disruptive and sometimes overwhelming negative side effects?

The transition Craig is reflecting on and working through a continent away, provides parallel insight for his former hometown. He observes, as many do, the phenomenal pace of technological change, the impact on industry and of climate change, and the economic transformation these both imply, particularly for Australia. When he reflects on the future for his children, he’s aware that the jobs of today may not exist tomorrow. So what advice does he give to his children as they develop? His intuition tells him that skills in designing and building things – whether they be physical, electronic or creative – will endure regardless of changing applications. Gippsland has those skills, the challenge is to keep them and grow them further, with a global perspective.

Technology will continue its rapid development, whether we like it or not. We are faced with the choice of looking forward or being left behind. Today, via technology, it’s possible to have the world come to Gippsland, but Craig suggests a global curiosity is essential to make that work, with travel the best way to learn and find the opportunities workable for Gippsland.

You get the feeling while current family life may see an end to Craig forging checkpoint papers in active war zones, the experiences will be ever as rich. The “Brain Flash and Smart Ideas Man”, as his 17-year-old friends described him as in 1986 (courtesy MHS magazine short story, Corridor Affair), will turn to deeper storytelling to connect us across the mountains and oceans, which will be a benefit for all of us.