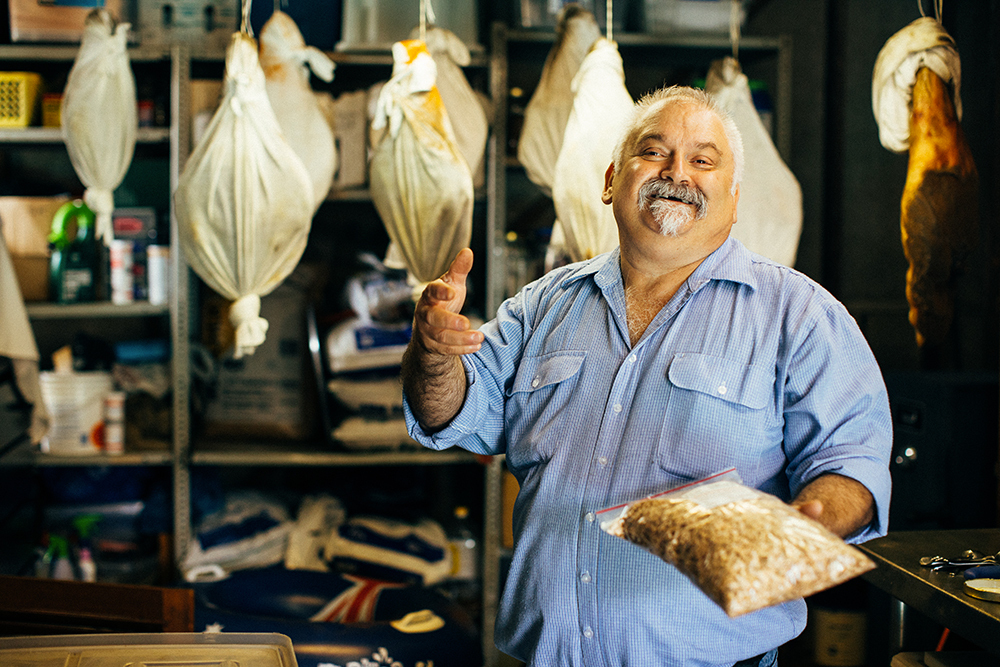 Me and meat, and meeting Tony Teresi.

Tony's passion for curing meat goes beyond producing something edible. His skills in charcuterie are a gift that’s bringing joy to many others, that also adds purpose to his own life.

A brief apology to our vegetarian readers, as I take a moment to I indulge myself on glorious meat.
—

Over the years, I’ve come to understand that a well-made prosciutto is less a specialised Italian delicacy that requires the precise curation of dried ham, than a preview, of sorts, into the divine. While some of the world’s most progressive thinkers, such as the late Apple CEO Steve Jobs, the Beatles, and comedian Bill Hicks (to name a few), insist on the transcendental powers of consuming ‘magic mushrooms’ as a device enlighten one’s mind, when I’m searching for inter-dimensional awareness, I prefer to get my kicks with an ingredient that’s a little more socially acceptable, a tad less hallucinogenic, yet I believe, still mind-altering, if properly prepared. Ahhh, the power of prosciutto.

To elaborate further, take the wise words of a globally recognised authority on the matter, Homer Simpson, and discussion with his daughter, Lisa Simpson:

Homer: “Does that mean you’re not going to eat any pork?”

“Dad!!! All those meats come from the same animal!”

Anyone wanting to deny the validity of Homer’s questioning proclamation, mustn’t have eaten proper prosciutto. Let me describe the experience. Lay a paper-thin slice of fresh and delicately cut Prosciutto di Parma across your palate, then allow the expertly salted meat and lard slowly melt and dissolve into your now-eager taste buds. The result, an altogether salty yet milky, buttery yet chewy, taste explosion of the senses. For a moment, time stops, and it’s just you and the prosciutto. You may go blind temporarily as your entire sensory attention focuses on your mouth. Plus, it’s completely legal. I implore you, try it once before you die. How people can develop an addiction to cigarettes while prosciutto is available at their local deli, is something I’ll never ever understand.

With that off my chest, you may now understand why my attention was immediately piqued when a stout and jovial Italian man excitedly shared with me that his passion and hobby is curing Italian style meats, including among many other things, making his own prosciutto.

I’ll never forget the day I met Tony Teresi. December, 2016. Myself and the Gippslandia team were on the cusp of releasing issue one. We’d been working through consecutive nights to get the paper finished and were bracing ourselves for a final night working, with the expectation that we’d be going to print before going to bed, no matter the time.

The news that our publication was coming had started attracting some attention for us, and few
were as warm, enthusiastic and supportive as local booko’s Andrea and Mark from Reader’s Emporium in Traralgon. As publisher of a new journal, Andrea had invited me to come speak briefly at their Christmas event – a small gathering of their most cherished customers, a collective of eager readers, some authors, and general literary enthusiasts from across the region. ‘Ideas worth sharing’ is their mantra, and in Gippslandia, I felt we had many ideas worth sharing.

On my arrival, I was a little surprised and quietly thrilled, not to recognise any faces. I was greeted by my hosts and soon began chatting with the other guests. Cut forward – the word prosciutto – and suddenly I’m engrossed in a conversation with Tony Teresi. I believe the trigger was when I asked something to the effect of “So you’re here at a bookshop’s Christmas function you must be into reading – what kind of books do you read?” Tony reads books on food preservation and meat curing, and that is an understatement.

I’ll elaborate further, but if I could punctuate the point by saying that Tony is very interested in writing his own book about his ways, techniques and methods. I believe he’s more than qualified to.

Completely taken by the energy and enthusiasm of the man, I immediately knew Tony’s was a story that’d make its way to print. It dawned on me that the electricity pouring out of someone, when you allow them the opportunity to divulge their passion, is a joy I wish more people would actively seek to obtain. The enthusiastic sharing of one’s passion brings real lasting warmth to the heart, far beyond the superficial swipe of a ‘social’ network. I began to wonder how many others in this room have something like this to offer? Tony dived back into his prosciutto preparation and I had to know more.

Weeks later, we visited Tony at his home in Morwell. Warmly greeted, before we’d even stepped from the car, we were soon introduced to Tony’s lovely wife, Coralie. Tony was visibly proud as punch to be interviewed, and it clearly meant a lot to him that Coralie was also there for our visit.

Their home is very much the house of an Australian-Italian, and in particular, a Gippsland Australian-Italian. Soon, I and my photographer Andrew (who’s also a half-Italian by way of being my cousin) were knocking back an espresso and some beautiful home-baked biscuits. The smells and setting were enhanced by Tony’s incredible spirit. This was a very familiar setting for us and having travelled the world to meet our extended Italian heritage, I can assure you what we have here in this thin slice in the passage of time is rare and special. We were loving being there.

Perhaps it’s my own Italian heritage that sparked my interest in this man’s story, but his passion for curing meat goes far beyond just producing something edible. His skills in charcuterie are a gift that’s bringing joy to many others, as well as adding improved direction and purpose to his own life.

Tony has endured more than his fair share of tough times. Born to a hard-working immigrant family, he worked throughout Victoria in a number of industries, including; electronics, textiles, hospitality, and dairy production. He was once a breeder of American Polled Herefords, but lost the business when the market dropped and the beasts were more valuable on the hook than in the paddock. He’s endured bouts of depression throughout his life and believes that one of his greatest achievements has been overcoming an accident, that could’ve taken his life, while working in dairy production.

“I was working up on the milk dryer. Concentrating. I caught my feet, slipped, and fell two whole stories.” His injuries: severe and impactful. His recovery: courageous and honourable.

Years on, it is to Tony’s credit that he’s now able to stand proudly, a smile brimming from ear to ear, happily sharing the products of his labour and craft to close friends and selected connections.

He recounts the story of a successful local businessman: “I was on the phone to this guy and I was shitting myself,” he says. “The guy says to me ‘I have to talk to you about your meat, my mother’s in tears’.” “‘Oh no!’ I thought to myself. What have I done?!” It turned out those were in fact tears of joy. The flavours of the meat that Tony was able to produce had been the closest thing she’d ever had to that of her late husband’s. They’d joked that she thought her husband had been reincarnated and gotten to work on making one last immaculate salami for her lunch.

Sitting there, polishing off our espresso, we acknowledge the bulging bookshelf to our right. Tony, is clearly very well read. A quick scan across the tomes and you’ll quickly see an impressively organised collection of written knowledge on all subjects, topics and matters to do with sausage making (including Polish sausages), butchering of livestock and game, charcuterie, smoking, marinades, BBQ techniques, all methods of preservation, dry-curing pork, bacon curing, and jerky, and that’s just the meat section! “I’ve read them all cover-to-cover. I can’t get enough. I’ve got just about every book on the subject that I can buy,” explains Tony.

There’s also shelves dedicated to cheese-making, bread making, cakes, chutneys, jams, ice cream, and so on. This guy not only likes food, he knows food. A quick estimation of what’s contained on the shelves brings me to a rough tally of about 300- 360 publications. One of his favourites, Preserving the Italian Way, by Peter Demaio, is a classic.

Over three hundred books read on a selected topic isn’t something people typically embark on, unless they’re researching for something specific, such as higher education. I was interested in learning if there was a method or insight that could quantify the significance of the volume of reading on a subject in relation to the knowledge gained. This lead me to a rather intelligent gentleman, Garth Zietsman, a specialist in psychometrics and statistics, with a reported IQ of 185 — which is higher than Stephen Hawking and Albert Einstein — so I’m happy to assume this guy is an authority on the matter.

Zietsman has published a piece called, “How Much Reading Makes You Educated, Expert or Erudite?” In which he states that “It’s hard to deny that skill acquisition depends on practice, and that knowledge depends on expose...by no means are all extremely erudite individuals university educated”. Zietsman then proposes that, “achieving a Bachelor of Arts is the equivalent of reading 116 books on a topic”, and that, “a PhD, is the equivalent of reading 704 books”. As we let Zietsman’s idea simmer, I’ll continue to describe our tour of Tony’s shed.

The shed is where all the preparation happens, and it’s where Andrew got busy documenting Tony explaining his craft. Inside the shed, we were surrounded by a neatly organised, Tetris-like arrangement of smokers and tubs, slicers, boilers, fridges, and freezers, as well as sacks and jars of well-labelled herbs and spices. The term homemade’ lives here.

“I don’t use any chemicals. I couldn’t do it.” Tony muses, as he proudly holds up an 18kg prosciutto leg masterpiece. His knowledge starts to leak out; “You gotta get the blood outta the bone or the whole thing’s ruined.” “A bit of mold is normal. It’s okay. The white and green (mold), that’s healthy; it’s the brown and black that you gotta be worried about!”.

As we begin to leave Tony, clearly in his element, ushers Coralie to dig deep in a freezer, and she then hands Andrew and I some bags of frozen pork-and-fennel sausages. His generosity is as contagious as his eagerness to please. “I’d love to write a book. Maybe expand it into an actual business. Maybe even do some classes. I’ve got so much knowledge and I just love sharing.”

Now, back to the stack bookshelf. Let’s assume Tony’s bookshelf holds 360 publications, and that he’s read them all cover-to-cover. The first part of Zietsman’s statement suggests that Tony’s self-education on food preparation gives him the equivalent knowledge of someone with no less than three university degrees. The second, puts him over halfway into what would be a PhD (on prosciutto?). Wow! That’s a profound and immense body of knowledge that Tony’s developed over the years, not that’s overtly on display, such is the man’s humility and grace.

As we left Tony and Coralie’s home, our faces and bellies smiling, I realised that the visit had taught me one very key thing - passion drives this region.

As different industries and corporations come and go, it’s guys and gals like Tony that will ensure the heart of Gippsland continues to beat, strong and proud. Tony’s craft is world-class, and we’re lucky to have this guy in our community. Let’s give him, and all the other local champions like him, a big, long, round of applause.