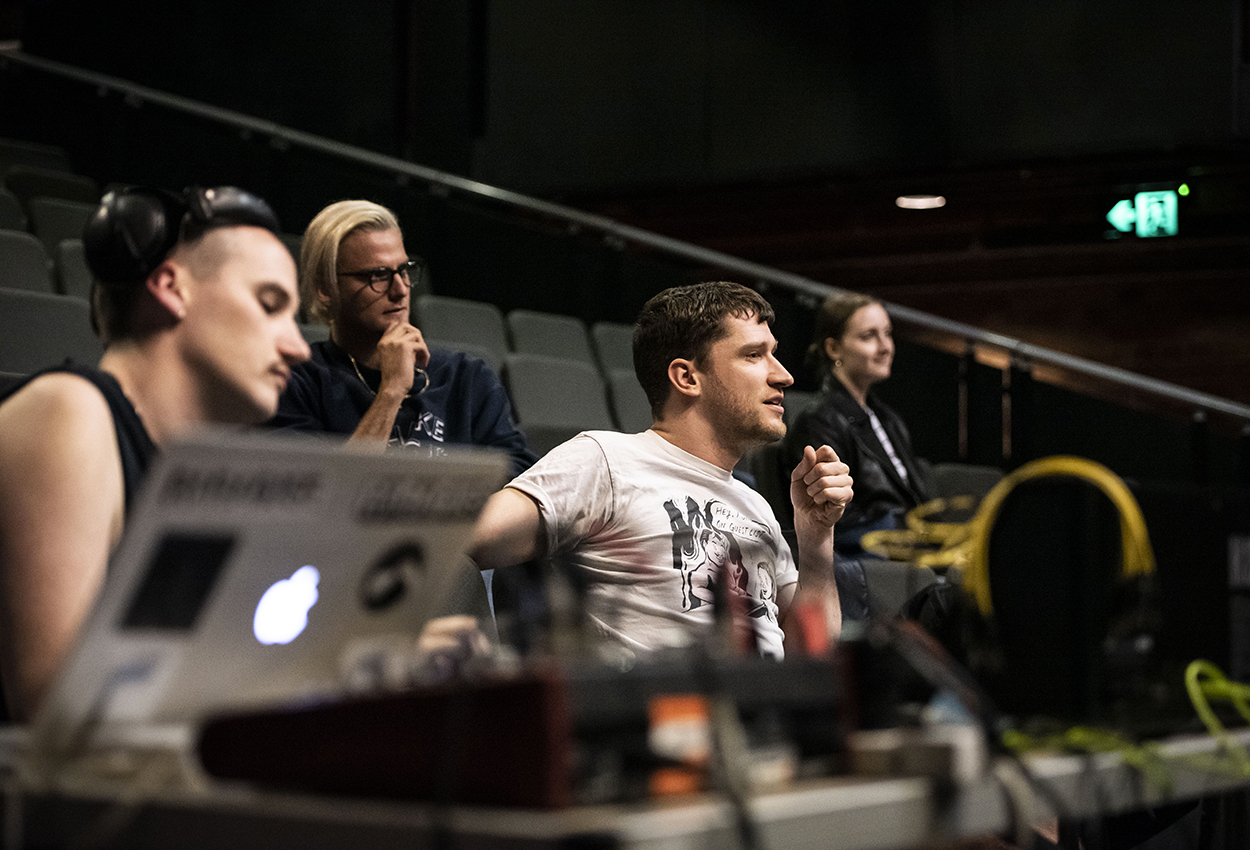 Loving art yourself, and not yourself in art.

Theatre-maker, Declan Greene is toiling away at shaping the stories that will make the Australian theatre industry more vibrant.

Despite being in the background, Declan Greene doesn’t take the backseat. He’s toiling away at shaping the stories that will make the Australian theatre industry more vibrant, provocative, engaging and hilarious. Declan’s a theatre-maker, director, playwright, screenwriter and dramaturge.

Aside from a multitude of diverse shows under his belt, in collaboration with his best mate, Ash Flanders, he runs Sisters Grimm, an independent queer theatre company, and is currently is a resident artist at the Malthouse Theatre.

In the late ‘90s, Declan’s family moved to a small hobby farm in Iona. At the cusp of adolescence, 11-year-old Declan learnt to explore his identity, the ideology of queer culture and the disposition of his disconnected environment.

“One of the interesting things living out there was when you’re a teenager and a gay weirdo, like I was… I was pretty far away from the people like… You don’t get to fit in quite right. I didn’t know any gay people until I moved to Melbourne, even though I had a lot of friends growing up in the country.

“You feel separation of your people, so you tend to live vicariously through the people as much as you can through film or music. Being removed, it becomes a weird version of the culture. It was sometimes beneficial living in your own dream land. It helped with the imagination”.

It was his incessant imagination in his teenage years that allowed Declan to find a knack for writing in high school. The theatre was a home to nurture creativity and work with like-minded students. Declan loved to act and thought that’s where he’d end up, but he had a wise cheerleader in his corner that thought there was another field he could flourish in.

“One of the most interesting things that happened to me when I was at St. Paul’s [Grammar School] [was that] I had an amazing drama teacher, Prue Vermay, that ran extra co-curricular theatre. She really changed my life. I wrote so much in high school and she supported me, [saying] that I should be writing. It really encouraged me to do that… when you’re young you need someone to cheer you on. It’s a massive thing”.

Funnily enough, Declan tried to resign from theatre life at the ripe age of thirteen by handing in his notice to discontinue drama lessons. But when Prue learnt of this, her “whole being screamed”. She knew he had a future in the performing arts. She intervened (thank goodness!) and took him on board as a student, where she saw this talent — which she described as, “obvious, challenging and exciting” — grow and blossom.

In his final year at St Paul’s, Declan was the school drama captain and he directed the middle school musical, Smithy. In Prue’s words, Declan’s early deftness with the craft shone through, “His creativity of presenting this play, including the staging and construction of the set was remarkable’’.

Following high school, while studying arts history in Melbourne, Declan did theatre as a hobby. After seeing himself acting in a film he realised… it wasn’t great. So he slowly stopped performing, yet kept writing plays. It’s where he grew confidence. This hobby gradually turned into a paid gig, and from there it has been his job ever since.

While in school, Declan showed a natural ability to work and inspire the younger students, thanks to his own passion, Prue recollects, and this leadership proved to be, “[the] next string in his bow that was developed and appreciated”. You get the impression that Declan’s inclination is to still act as a cheerleader for his actors and crew through encouragement, kindness and their mutual love of creativity.

For the past decade, Declan has run Sisters Grimm with Ash. It’s bizarre. It’s trashy. It’s minimally resourced theatre that’s thrown together, but it’s great. It’s a project that focusses on making theatre that you don’t normally see.

“It started as a weird hobby, as we (Declan and Ash) had a fairly antagonist relationship in the mid-2000s with the kind of theatre we’d like to see. We began to sharpen the quality in 2013 with an invitation [to work with] the Sydney Theatre Company. We now collaborate with many others”.

Throughout the early beginnings with Sisters Grimm, it was roping in friends and the broader queer community to act in and produce shows. The origins of Sisters Grimm was to make themselves and others laugh. They began creating their own world on- and off-stage, then through word of mouth and artistic collaboration they started to make a name for themselves that extended beyond their immediate network.

“I’m fairly lucky to have people who have taken me to where I am. I still work in the main stage — theatre companies working on non-commercial theatre. Within those companies, it’s sort of the reputation of the work that’s more enforced, not the popularity or hype of the commercial sector”.

Declan recently scored a huge gig in adapting Lars Von Trier’s Melancholia. The moody, apocalyptic drama presents interpretations of depression and anxiety. The story follows the complicated relationship of two sisters, Justine and Claire. As they prepare for Justine’s wedding, a rogue planet (Melancholia) heads toward an impact with Earth. The anticipation for the collapse of the world sits heavily with the audience, heightened by the prelude to Richard Wagner’s opera Tristan and Isolde recurring prominently throughout the film.

Declan believed the story had the stamina for the stage, and he wanted to be the one to put it there. He partnered with director Matt Lutton to what Stage Noise described as, “a great piece of theatre”, especially considering the heft of Lars’s star cast and lavish cinematic production. The Guardian saw the adaptation as an “Accomplished, evocative stage debut”.

“When I first saw Melancholia, I thought it was incredibly effective and could be a really great play to adapt. The characters were trapped in one location with the end of their privilege, witnessing the crumbling of their world.

“I wanted to convey contemporary arguments relevant to film politics. It was really important to try and say something: ‘how is this relevant to the world at the moment?’ The major apocalyptic change on the horizon… the world we know is ending… systems are declining… reinforced in the design of the universe. That was really important to us, it felt like it was something of human interest in Melancholia, with the main character, Justine, being a dreamer and an idealist and [someone] who wouldn’t compromise”.

Declan was a little stumped when asked about what he does outside of his theatre life. He said there isn’t much time, that it’s complicated to work in professional theatre as the hours are so long. But he also can’t help himself, ‘cause when another project comes across, he says, “I am also really bad at saying ‘no’. If a project sounds cool to me, I will say ‘yes’ to it”.

Little Mercy, 2010, Declan Greene, Cara Mitchell, Ash Flanders, Susie Dee, Sean James Murphy, Katie Sfetkidis. This was the cast and crew of a show we made in a carpark. Photo by ISKA photography.

Similar to many creatives, Declan offered that he’ll ‘procrastinate then panic’ as a description of his approach to his artistic practice. The drive of an approaching deadline gets the adrenaline pumping. But underpinning that is the unconscious need to communicate and explore ideas: to tell stories.

He is currently directing two productions at the Malthouse Theatre: a one-woman remake of Wake In Fright, an Australian gothic horror classic performed by Zahra Newman; and Blackie Blackie Brown: The Traditional Owner of Death, a fast-paced comical adventure of our nation’s favourite Indigenous superhero.

When he was young, Declan’s imagination provided an escape. Now, he uses it to achieve so much more, tapping into the nuances of the human condition from numerous angles to either challenge the audience or have them disintegrate in laughter — frequently both, simultaneously. Yet, layered underneath his work, there is relevance and connection.

More information on his upcoming shows can be found at www.malthousetheatre.com.au for both Wake In Fright and Blackie Blackie Brown: The Traditional Owner of Death.