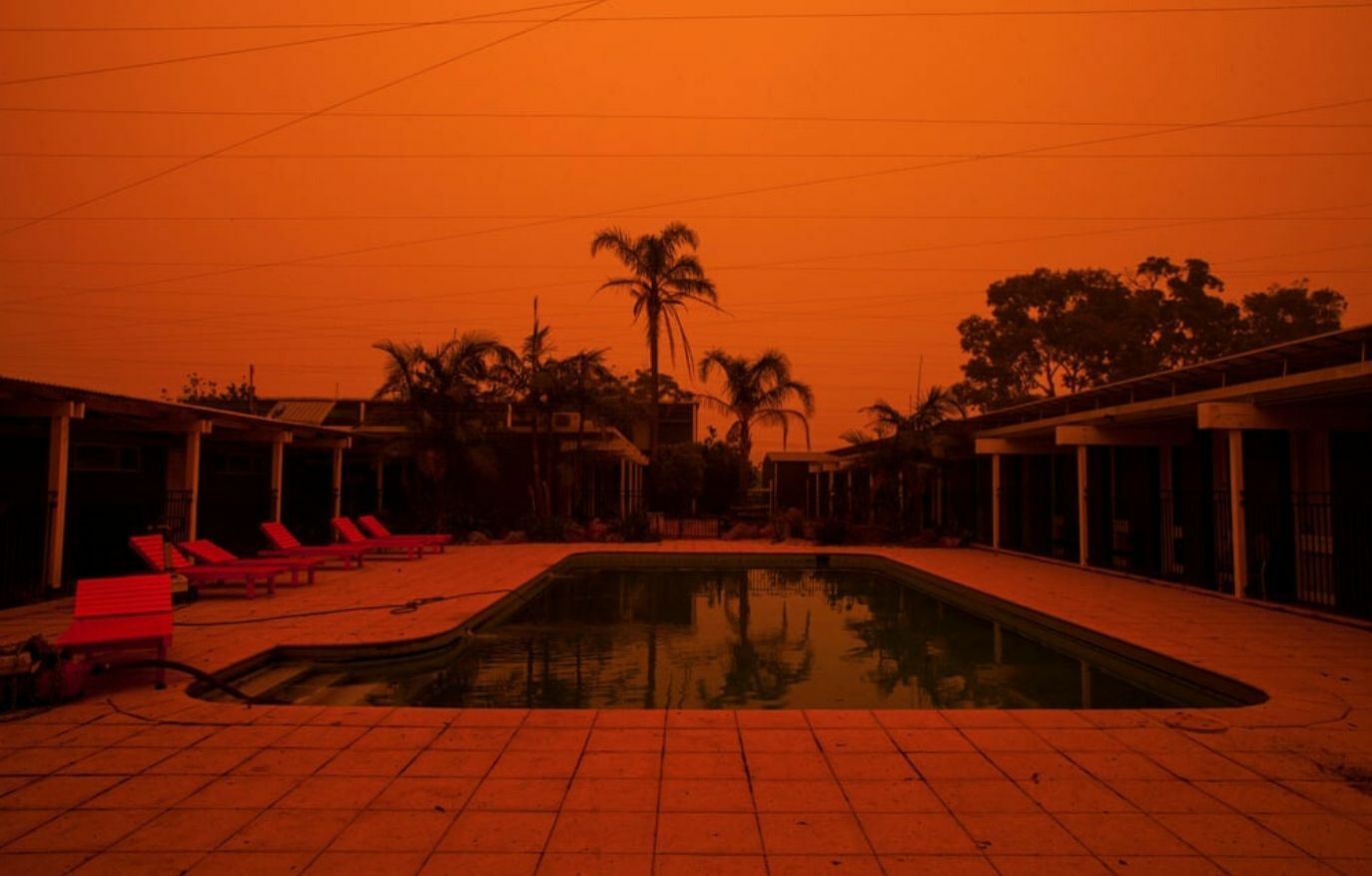 New Year’s Eve 2019. Mallacoota. The headline of the New York Times reads “Apocalyptic Scenes in Australia as Fires Turn Skies Blood Red”. And, as if that wasn’t enough, there’s a photo of a kangaroo, mid-skip, silhouetted by a blazing house fire. It makes it all feel too real.

Al Jazeera, CNN, the BBC, The Guardian, the LA Times, Le Monde, BuzzFeed; you name it. Every major news outlet on Earth leads with the story, broken by our very own ABC Radio Gippsland, of the fires encroaching Mallacoota. Images of Gippsland ablaze are tweeted by everyone from Greta Thunberg to Hilary Clinton. The colour of NYE 2019 around the world is blood red.

The Australian bushfire saga would unfold over the following month and the world’s eyes stayed transfixed. Gippsland would be on the tip of the global tongue.

The central thread through all the reporting was the terrifying photos telling Mallacoota’s story to the world.

Rachel Mounsey is a photojournalist from Mallacoota who has her work published in The Guardian, The Australian, The Sydney Morning Herald and The Age. She was in Far East Gippsland as the fire front approached.

“A photo is hard-hitting. It comes straight at you. It’s exactly what’s going on. It doesn’t lie. Images like the ones of the bushfires have the potential to change situations.”

She commends the photojournalist community for the “momentous effort” of capturing this moment in history.

“Altogether, the photographers of Australia, at this moment, have created an incredible body of work collaboratively and have told all different angles of the fire story.”

As a photographer, Rachel was compromised as the fire front approached. With her family’s best interests at heart, she took refuge in a hall, observing all she could.

“I could see through the skylight, and the sky was changing. I couldn’t get out, but it was beautiful for a photographer. I absolutely loved what the sky did. I don’t think I was frightened of it, I was more in awe.”

In the days to follow, Rachel focused on capturing the humanity of what was happening around her like, “photos of kids playing in the lake trying to catch ashes on their paddles.”

The photos taken during the Black Summer fires capture a terrifying time in human history. With entire towns trapped for the duration of the fires, we saw more shocking photos of the bushfires than we have ever seen before. Similar to the Vietnam War being the first photographed war, this was the first bushfire that has been photographed from inside the moment.

Livia Albeck-Ripka, a journalist for the New York Times, chronicled much of the Mallacoota story. She says climate change was a big contributor as to why Americans watched this space. “The New York Times, along with every major international outlet, paid major attention to Australia’s unprecedented fire season, because the ferocity and scale showed just how devastating the impacts of climate change could be.”

Canadian photographer Jen Osborne worked on the Mallacoota frontline on assignment for numerous publications, including the animal welfare organisation Humane Society International. She reflects on seeing the viral picture (first published by ABC Gippsland) of a boy escaping Mallacoota by boat under that red sky — you know the one I mean.

“When I saw this photo, I knew I had to report on this issue. I was heartbroken. The story of climate change is very new to media — I’m not sure why we ignored it before — but it’s a hot topic now and I feel a duty to report on it.”

She reflects on the impact of the story on her fellow Canadians watching from home.

“Many Western viewers just couldn’t compartmentalise and ignore the effects of climate change in Australia. It felt very real for us to see a Western country suffering in this post-apocalyptic way, especially since we are struggling with a battle around an oil pipeline development in Western Canada. This was a wake-up call.”

Her photography focused in particular on the effect of the fires on Australia’s indigenous fauna that are, as she says, “those who suffer the most.”

“Animals give a vulnerable face to the story of climate change. Unless one is a psychopath, one feels immediate sympathy for a cause when witnessing an animal in distress.”

The photos of the tragic toll on animals taken by Jennifer and her colleagues have transcended language, culture and nationality, and have certainly invigorated the story around the world.

Dr. Eddie Clarke is a lecturer on social and political psychology at Federation University Gippsland. Like Livia and Jennifer, he believes the fires “hit home” the issue of climate change.

“I felt like there was an extra level of consciousness on this particular issue. People were starting to feel the tangible effects. It felt like some sort of dystopia.”

Meanwhile, climate change had already been thrust into the forefront of the news media in the weeks preceding. “The bushfires coincided with the global school climate strike, the California wildfires and Greta Thunberg."

"The fact that this all happened simultaneously drew so much more attention to our situation.”

I asked Eddie about the volume of the climate change denialists during the 2019/20 fire season. “In most of the rest of the developed world you don’t see it, and you don’t see it in opinion polling. There seems to be a somewhat high rate of climate denial in Australia and, of course, the USA.”

Curiously here, where we feel the immediate effects of climate change more than perhaps most nations, the science of climate has become a politically polarised issue.

Eddie says, “It’s something that’s gone on for the last decade. Once upon a time, there was a lot more consensus on the issue. From 2007 onwards, you start to see a polarisation at the top of politics… that moved down to the general population”.

“Media representations in Australia tend to give climate change deniers and scientists a fairly even rating. You don’t see it with other areas of scientific consensus. For instance, Covid-19 deniers haven’t been given any rating by the media.”

The coverage of the Black Summer fires was enough to sway even the most staunch climate change sceptics. In January 2020, Andrew Bolt infamously admitted that climate change is occurring, stating, “The Liberals’ response has been hopeless and MUST change”.

The journalism coming out of Gippsland during our Black Summer changed the world. Our home became the ‘dropping penny’, an immediate face of the ever-looming climate change our planet is enduring. Our stories of despair and hope, destruction and resilience, nature and humanity were terrifically told. Thanks to the storytellers, the message spread far and wide. 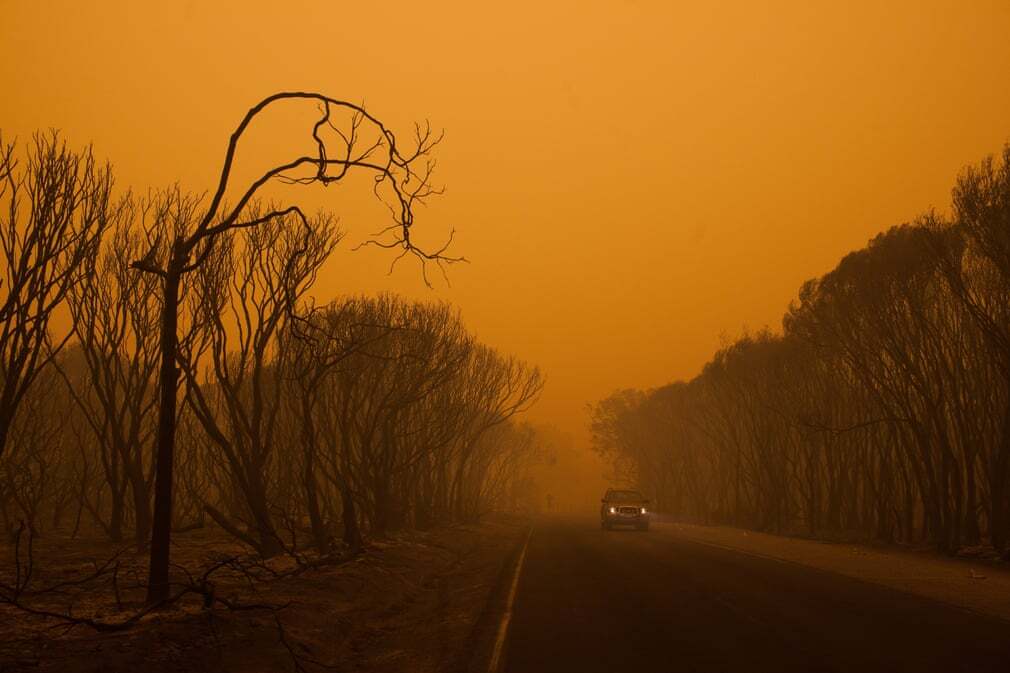