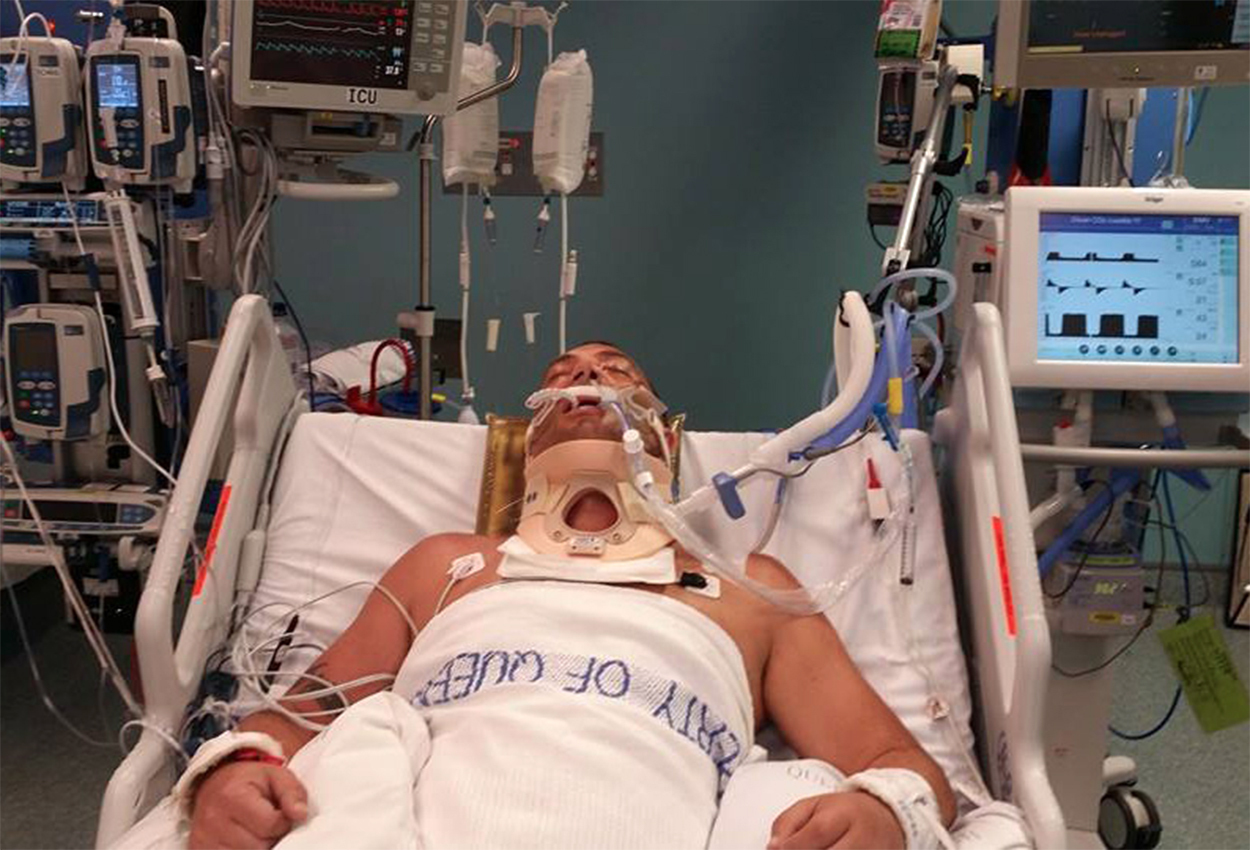 Almost instantly, Darron Eastwell went from working as a successful banking executive to being in an induced coma.

“The man I married left that day, never to return. While this may sound strange and unfamiliar, or even perhaps even a bit like a sensationalised overstatement, it is not. Such is the power of a traumatic brain injury to completely reshape an individual.

“And as it reshaped Darron, it has changed virtually everyone who knows him.” - Bianca Eastwell on her husband, Darron, from The Day I Broke My Brain.

Darron doesn’t remember the mountain bike accident. Just like, when he got out of hospital he didn’t remember the layout of his own home or even which kitchen cupboard housed the crockery. He wouldn’t until months later, such were the effects of his severe brain injury. For his therapy, Darron was supposed to jot notes in a diary, which would be a significantly easier task if he could remember where he put the notebook! Once the idea to write a book on his experiences had crystalised, he still couldn’t remember how to switch on his computer and type, hence the initial draft was hand-written. In a recent podcast interview with Matt Collins, Darron laughs as he admits that he can’t remember how he came to naming his book, The Day I Broke My Brain.

From a near-death experience to becoming a writer and a public speaker, Darron’s recovery is remarkable.

Darron was born and raised in Moe. After high school, as his peers were either set to get jobs with the State Electrical Commission (SEC), or heading off to university, Darron instead decided to put his natural mathematical skills to practical use. He first became a trainee at the Warragul branch of the National Australia Bank then in 1994, after working there for 18 months, he landed a transfer to the Sunshine Coast—Queensland’s balmier temperatures luring him north. This began a life split between Gippsland and the north, as Darron alternated between being closer to his family and enjoying the beaches and life in the warmer climate.

In 1997, while getting his hair cut, Darron met his future wife, Bianca, who’s originally from Traralgon. Then in 2014, he secured a promotion to Senior Business Banking Manager at Airlie Beach, Queensland, managing a $150 million commercial banking portfolio. The Eastwells have been based in the northern state ever since, and currently reside in Buderim, however, Darron is quick to point out that he’s still a “Gippsland boy at heart”.

Darron believes he didn’t exist after his accident on the 23rd of May, 2015, instead, a new Darron has come into being. This new Darron doesn’t dwell on the past but continues to look forward. The last memories Darron has before his accident are of another ride with Bianca, a whole two weeks beforehand.

On the day of the accident, Darron had been itching to go for a ride, having not hit the trails properly in a month, due to a recent relocation. Darron states he enjoys mountain bike riding, as it gives, “a bit of adrenaline, but I’m not crazy. I was a conservative rider”. He likes exploring local trails in the bush and rainforest.

Ironically, Darron began mountain biking as he was “looking for a non-contact sport” after enduring a couple of frustrating sports injuries. Breaking his own rule, he headed off to the Wooroi Trails in Tewantin National Park, without a riding partner.

Darron had ridden for two uneventful hours on the park’s established trails. As Mount Tinbeerwah is a feature in the park, the ride had included plenty of climbs. Then had come the downhill, with the GPS speedometer recovered from his bike showing that he had gone from 8 to 60km/h in no time at all. It happened then.

“My speedometer shows that I went from very fast to not moving at all”.

Darron’s bike was found 30 metres away from his body. He has no idea what he hit. His helmet was smashed, but without it, he would’ve died. The rider that found Darron said that he was drifting in and out of consciousness and was groaning on the ground. A 4WD ambulance was required to retrieve him and get him to hospital.

He was in a medically induced coma for seven days. It was likely that Darron wouldn’t wake up. He had suffered a diffuse axonal injury. The term ‘diffuse’ means that the injury occurred all over the brain, and the ‘axons’ refer to the nerve shafts that transmit impulses from one nerve body to another. As Darron describes it, ‘the brain exploded in his skull’, due to repeated internal collisions with both the front and rear of the skull. It was a ‘shearing injury’, disconnecting white matter from the grey matter in the brain. You don’t need to be a doctor to have an idea that this is very bad.

He’s learning guitar, as a health specialist said that’s one of the only activities that light up your entire brain. As explained to Matt Collins, Darron’s also undertaken ‘therapy’ under a tattoo artist’s needle. Darron can’t remember it, but sometime before his fateful ride, he’d booked time with a local tattooist, only to have Bianca cancel the appointment as he was still in a coma. Twelves months after the accident, he was ready again to get inked and has since spent 80 hours in the tattooist’s chair, getting pieces that cover his arms and back.

Darron’s remarkable recovery has been punctuated by his efforts in writing and publishing The Day I Broke My Brain, which he worked on from January to June 2017. He hopes that it can be a helpful resource to people that may be experiencing a similar situation to him and his family. Darron’s sold over 400 copies of his story, with copies sold in the US, England, Italy, Bali, Australia and more. To his amazement, he’s received words of praise from many people through Facebook, a cool benefit of today’s connected world.

In two years, Darron Eastwell has gone from a successful banking executive to being in an induced coma with a severe brain injury—lucky to be alive—to the author of his own book. It’s a remarkable tale.

“Thank God for my wife, Bianca. Brain injury affects the entire family as we learned over time. Bianca took care of our kids, had to deal with the horror of my accident, and attend to our financial matters… not to mention driving me around to appointments, putting up with my changed personality, my bad jokes, sickness and my moods.”

“I don’t know how she held it all together… I love her and my two kids deeply. I love my family and extended family so much and believe that this is why I pushed myself mentally and physically to continue to recover… I can honestly say that without the love and support of my family, I would not have made it this far.”