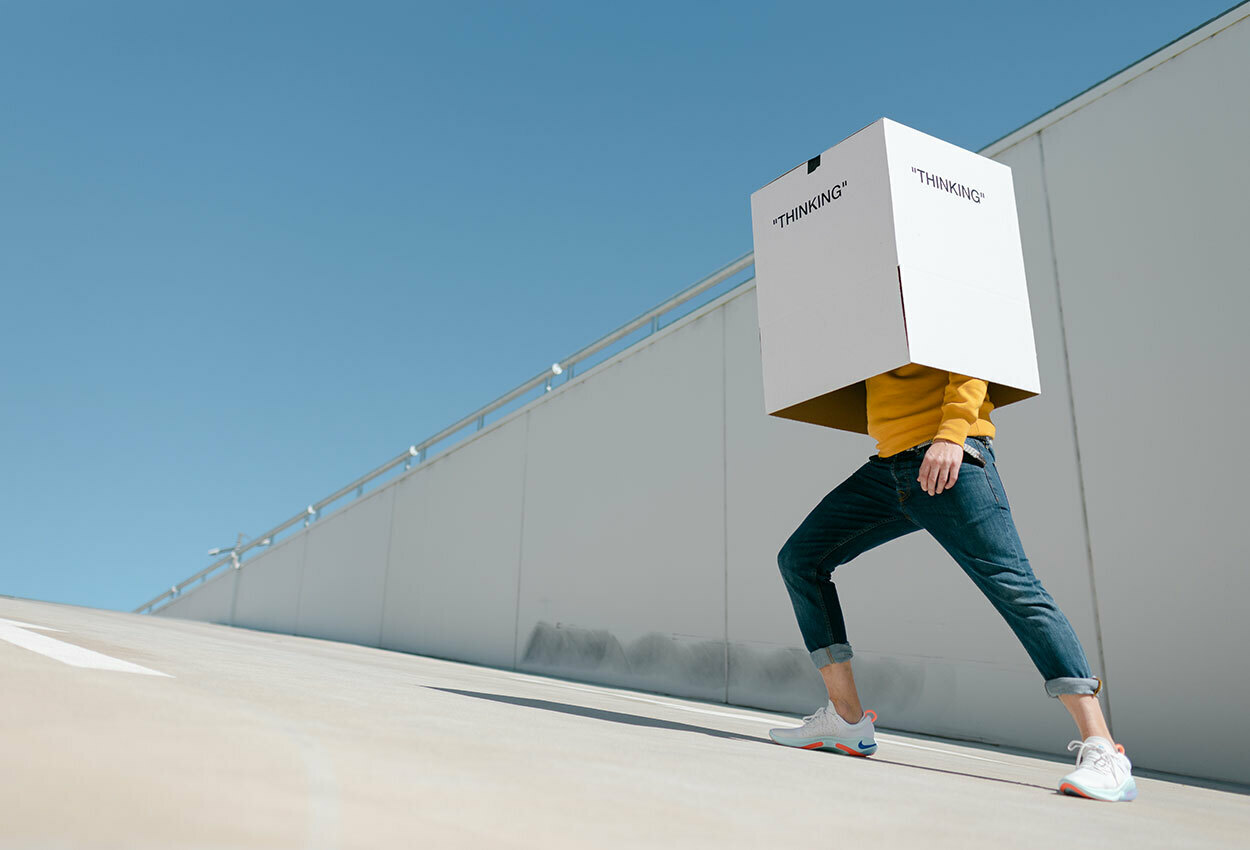 Let’s build a box to think inside of.

Me, Myself & Si explores the life of an introvert in the creative wilderness.

Today, the creative industries are a minefield of ideas, opinions, agendas, egos, whiteboards, markers and milestones. It’s an amazing place to spend one’s time, but if you’re a particular personality type, it doesn’t come without its pitfalls — especially when you’re an introvert.

Here’s a bit about me — my backstory and why I feel the need to write about the other side (not the ‘dark side’, the quiet side). My boyish good looks hide the true wealth of experience I’ve accumulated by working in the creative industries. On a global scale, in design terms, I’ve pretty much done it all, and by all, I mean everything. I’ve found important in terms of my goals. You’d never really know, because I rarely raise it, but then I’m not a big talker… shocker, huh?

My working in Gippsland is a bi-product of an initial employment opportunity in Melbourne, an opportunity that brought me to this amazing country. It’s a far cry from where the Skype-based job interviews took place from my ‘petite maison’ in the rural outskirts of the great industrial city of Leeds in the UK. At the time I was, and had been for the previous five years, running my own successful design studio — successful in that I had global clients, great work and it supported my growing family.

But there was a burning desire to relocate to Australia and embark on a new challenge in design, something I needed to tick off, which was working on a continent other than Europe. Around the same time there was talk and early negotiations to move stateside, to Atlanta, and work full-time with the Global Design team at Coca-Cola Headquarters. This was a team I’d been a part of for about three years as an outside contractor and, mostly notably, I had designed the whole wayfinding system for that particular headquarters. But the move came unstuck due to visa requirements and associated legal costs.

Australia won, and in late 2014 the opportunity that threw me out of my comfort zone was a new role: leading a design team, mentoring and ‘doing what I do’…

Fast forward three months and I was not living the dream that I’d signed up for. In my haste to move across the globe, I’d assumed that my experience, knowledge and creativity had bought me the divine right and privilege to work, think and lead as I saw fit. This process had served me well in the past, as I’d built my own business and client base. The reality I now faced was much different. I was bound by the in-house processes—which relied on strict deadlines, zero margin for error and even less time for experimental work (key to pushing your own boundaries)—leaving me unable to really push my creativity. I felt I was trapped in a creative straitjacket.

Introverts really suffer when speed and time constraints heavily influence creative challenges. Quickly, I realised I was in the wrong place to work my best, but I couldn’t understand why a company that sold creativity couldn’t allow me to work in my most creative way. For six months I tried, and then failed to fit in. I couldn’t do what I naturally fought against. Dictatorship in design is not for me. I couldn’t help thinking was I a failure, did they fail me, or did we just fail to understand each other?

All I needed was the freedom to work how I work best. Sounds easy right…

Hands up if you’re an introvert? My name is Si(mon) and I’m an introvert. I accept it. I fucking love it.

In my research of what it means being an introvert — a definition that is somewhat vague due to so many variables — I learnt about a philosophy called ‘New Groupthink’ that is being built into schools and learning environments to encourage group learning versus individual problem solving.

Now, this seems like a great way to lift the average aptitude of a group of individuals, but what happens to the ones that excel when they are left to think, immerse and drive themselves forward through their own appetite for learning and problem solving? What happens when ‘group thinking’ actually prohibits the best possible outcomes? How often do quiet students or colleagues get to told to “be more vocal”, “find your voice” or “participate”, like they have some sort of personality defect? The simple fact is that, as an introvert, we are more inclined to ‘think first, think more, then speak’. Simply speaking just to prove you’re present is not a yardstick for actually listening.

Take working environments, for example: previously, workplaces were filled with smaller individual work areas, be they micro offices or cubicles, where they could work in silos and get shit done. We now work in environments on the opposite end of the spectrum, where physical walls come down and everyone sits together and hears and sees everything that everyone else is doing.

Yay! We can eat together, slurp coffee together, laugh together, think together, even take a shit together. The problems start when we want to be alone together (for ‘alone together’, see noise cancelling headphones)… Being together together is distracting. Think of all those digital startup companies that have ping-pong tables, Playstations, Xboxes, bloody scooters to ride around the office. They are all there to distract you from the fact that working there sucks and the work you are doing is boring. If, like me, you like working, those things only distract from what you enjoy doing — being creative, thinking and doing. Some people really need to be ‘alone-alone’ to get shit done.

When I ran my own studio, I allowed myself the freedom to work how I felt necessary at any given time: an organically augmented structure that had me on a self-guided trajectory. Yeah, I had targets to meet financially, but I always knew that I could have fun with my work along the way to getting paid — no ‘Groupthink’, no whiteboards and no one as the self-designated task master. I allowed the designers I was paying to think how they wanted to think and not follow a rigid, predefined path.

I want to make it clear that I’m all for collaboration. Collaboration yields great results. But collaboration is not the same as Groupthinking or learning. Collaboration is awesome, because it’s inherently organic and not forced upon you — there’s no hierarchy in collaboration. Groupthinking, or what we used to call ‘brainstorming’ in the UK before it was deemed politically incorrect, is not the key to great ideas, it’s a way to generate ideas by people who like to be vocal. It doesn’t teach everyone to think deeper. It merely teaches those who are not vocal to just let the vocal ones lead. One size does not fit all.

I’ll tell you what works for me — alone time.

I’ve always been a runner, from representing my home county and district cross-country team as a schoolboy, to running for general fitness, but I also always hated it with a passion. As I was good at it, I was picked to represent the school, then the county and district. But it wasn’t until my thirties that I actually started to enjoy going out and running. No one really enjoys the running part of running, there’s always some other part of the activity they enjoy. Beating a time, going a longer distance, discovering a new route…but the pain of running — NO ONE enjoys that, EVER.

For me the enjoyment came from being alone in my head with no distractions. When you’re out running with your headphones on, no one interrupts you to ask if you got the email they sent you even though they’re sat right next to you, no one calls up to mention you forgot to attach a PDF that needs to be at the printers before 5pm and no one hassles you in for a meeting when you’re trying to be ‘alone together’. Hell, even cars stop for you when they see you’re in the zone, or physical pain.

Running to think. That’s my thing. Hey, let’s do a group run? No thanks! You can catch me on Strava or whatever app you use.

I’m not saying that the ‘New Groupthink’ is wrong. I’m saying that’s designed to cater for a certain type of person and those it doesn’t work for shouldn’t be discouraged from working the way that yields their best results. The world is already becoming remarkably generic, so let’s not do the same with thinking. Are we in danger of overthinking thinking? Or are we undervaluing learning to think deeper? Are we somehow more focussed on someone’s ability to talk about an idea rather than the ability to generate great ideas? Do we just need managers that are aware of different personality types and the expectations on both sides? One thing we need to acknowledge is that even the best ideas don’t come on demand, they take time, and for many, they come when you least expect it. Nurture your process and the ideas will take care of themselves.

Being alone in the creative wilderness is not scary, it’s empowering and it’s incredibly productive. As an introvert, it’s a vast landscape of intrinsically internal possibilities — the freedom to think and do.

—
Have you ever wondered why there’s no social groups dedicated to introverts? They wouldn’t bloody turn up.