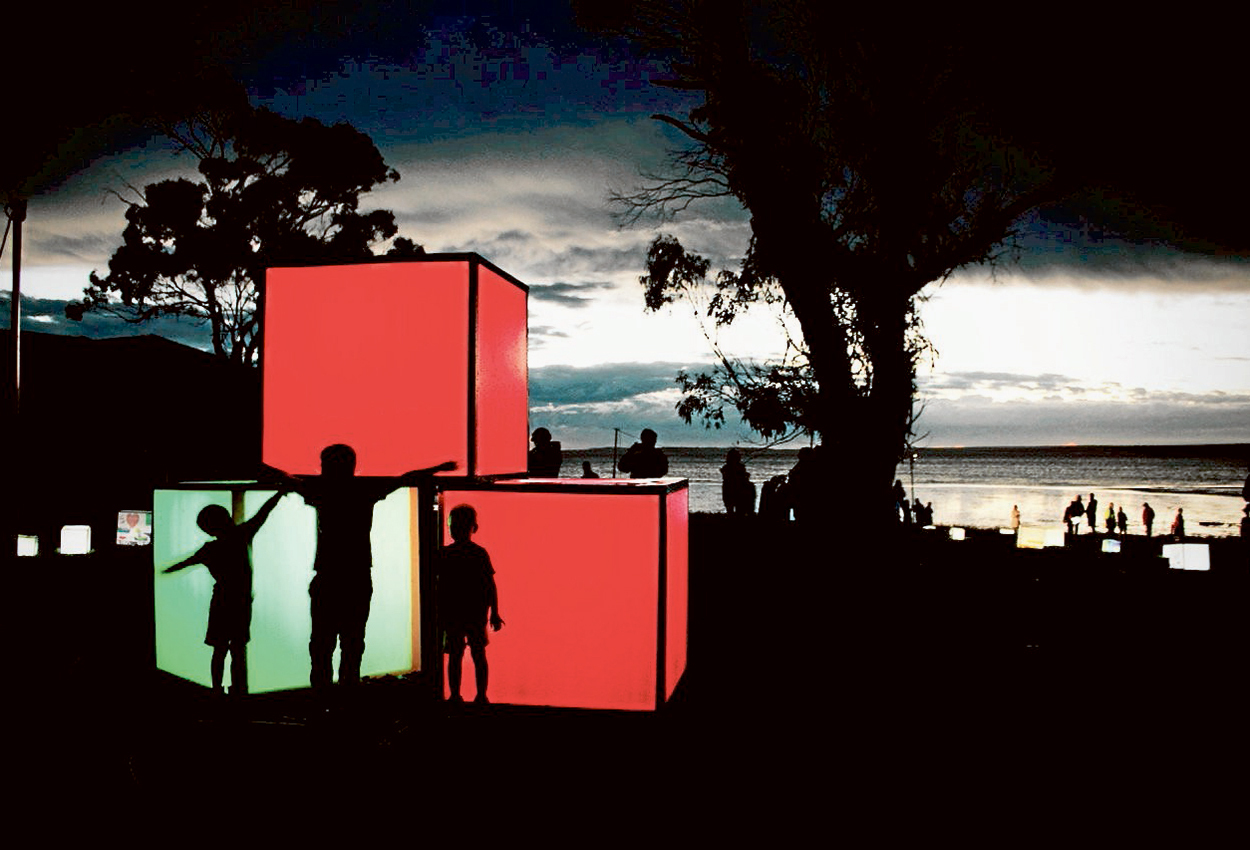 Let there be light.

"Wow!" they exclaimed on a deeply dark and chilly night in April. "This is something!" Together we'd created it.

“Wow!” they exclaimed on a deeply dark and chilly night in April, “This is something!” Together we had created it. Now one-by-one and in groups; by foot, car or bus, others came to our creation.
—

Only an hour before the opening of Luminous Streets, a dramatic storm with thunder, lightning, high winds and an extensive downpour, had left our artworks saturated with many of them on the ground. Then, as fickle as the elements can be, like turning off a tap, the truly magnificent natural light and sound show we thought had scuppered a year’s planning and hard work, gave way to a clear, peaceful and refreshing silence. Those in Corinella witnessed a full rainbow that framed the entire district, moments before the skies darkened for nightfall. 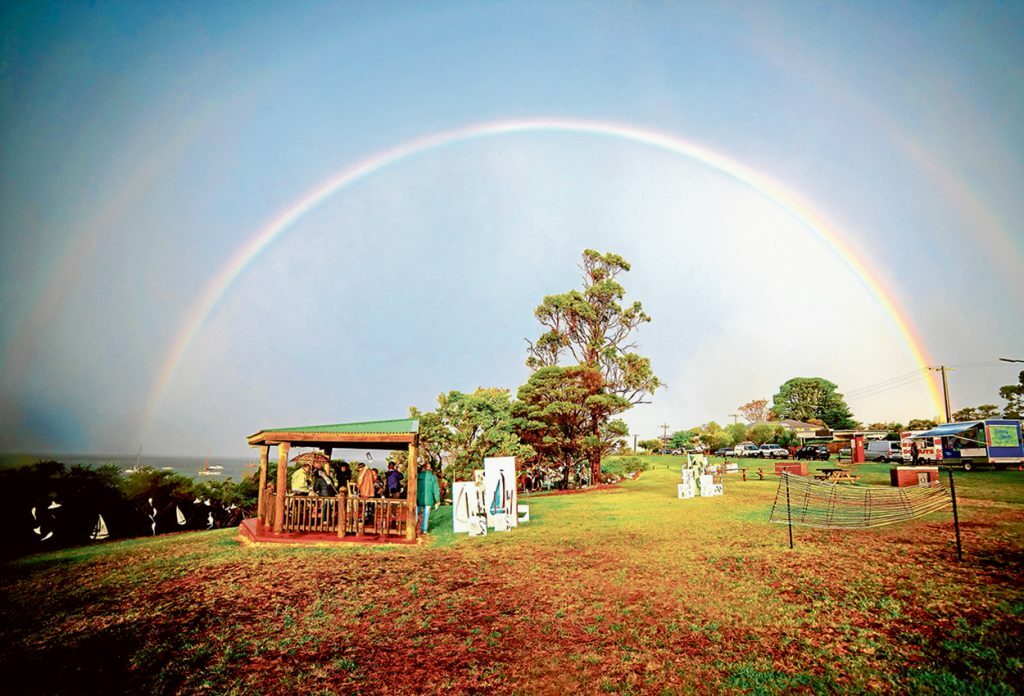 The rainbow over Corinella.
Photograph by A Carson

Within minutes organisers declared the Luminous Streets event back on. The parks and shorelines burst into frenzies of activity. Tired and wet people scurried with armloads of signs, tools, pegs and batteries to finish erecting and mending installations, connecting batteries and lightworks, and driving minibuses to the various pick-up destinations. Brave hearts emerged from their houses and cars and gathered for the opening of proceedings, ready for the Boon Wurrung welcome to country ceremony, and the flare to be fired above Westernport Bay.

The crazily ambitious quest to simultaneously light up five tiny townships with outdoor galleries full of artworks created by artists and the local communities was the first stage of one of the area’s Small Town Transformation project, The Edge Of Us. Small Town Transformations, a Victorian Government initiative managed by Regional Arts Victoria, will see six small towns from across the state undertake creative transformations. The Edge Of Us has been jointly created by the towns of Coronet Bay, Corinella, Tenby Point, Grantville and Pioneer Bay, five towns along the Westernport seafront in Bass Coast Shire. 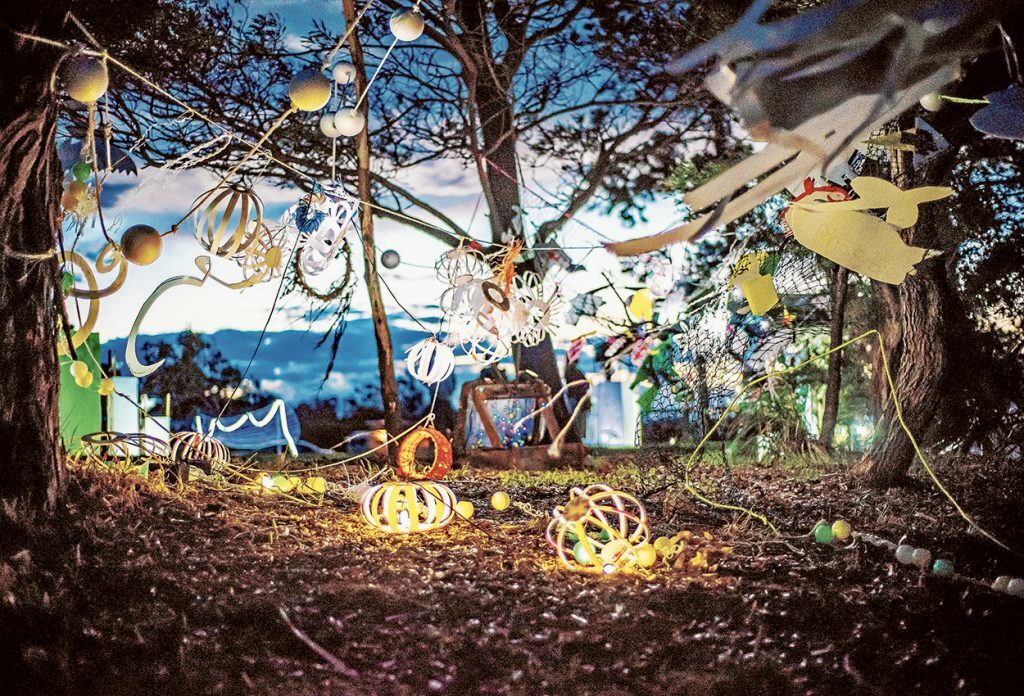 The creative teams were thrilled to watch the faces of those who’d initially been puzzled by the whole concept suddenly light up. The ‘ah-hah. I get it!’ moment, when they finally understood the power of some lights and batteries, combined with hard work, fun and communities working together.

“Sometimes there’s a need to show, not tell,”, one of the creative team members Jeannie Haughton said “Sometimes all the explaining in the world doesn’t help others picture something that really hasn’t been done before.”

Photos and film give a glimpse of the magic of that first night. The wonderful diversity of the artworks; the hubbub of excitement of children and adults discovering their own and others’ work, perhaps lit and in public for the first time; and the scope of creativity and endeavour in our small waterline places. 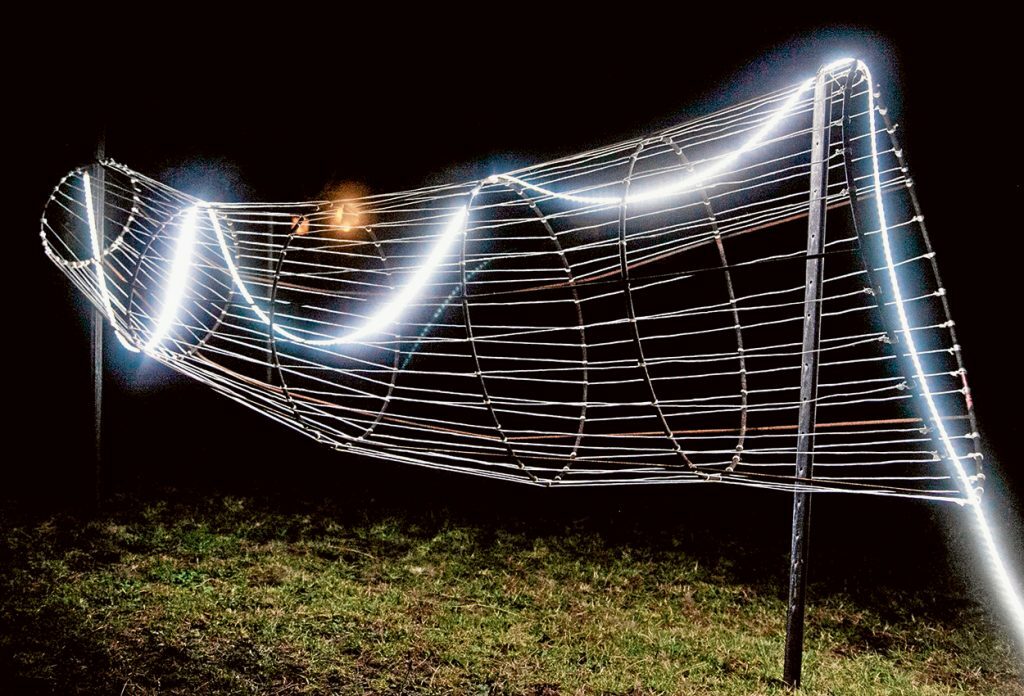 However, cameras haven’t captured the mellowness of curious families, who wandered chatting together after dark, across the six nights, sometimes venturing into tiny hamlets they’d never visited before. There are few images of the feverish, last minute work involved, the problems encountered and solved so often on the run, nor of the saturated tracksuit pants and bad-hair worn for the entire night because there was no time to change outfits after the downpour. These tales are the stuff of legend, laughed about every time a local group gathers and remembers the night, that storm and the amazing light galleries.

Proponents of Small Town Transformation believe that being involved in the arts can bring about change in towns and individuals. It offers a chance for communities to work with professional artists, to dream up ideas, to analyse needs and strengths of their local place and its people, and to speculate on what could actually become a reality. The creation of the artwork then breaks people out of the mundane; it coaxes them to take risks and push themselves. It can actually change the way people view themselves and the place they live in. Projects such as this can make a difference.

Luminous Streets’ extraordinary success was due largely to the work of extraordinary people, and a vision that still wasn’t totally clear until it finally happened. A core creative and management team of Jessica Wilson - Artistic Director – Jeannie Haughton, Assistant Artistic Director and Mary Sullivan, Project Manager – worked with two further artists – Lisa Burrell and Andreas Diesner – and a Community Steering Committee. Thanks to the communities and organisations of the five towns, Bass Valley Primary School, and the assistance from Bass Coast Shire, five enchanting spaces were created.

Overall, the event created a sense of adventure, some whimsical and playful experiences, and some unexpected, transformed open air spaces. From the planning for a funding application, through to the final demount, the local community has been wonderfully involved and thrilled with the results. 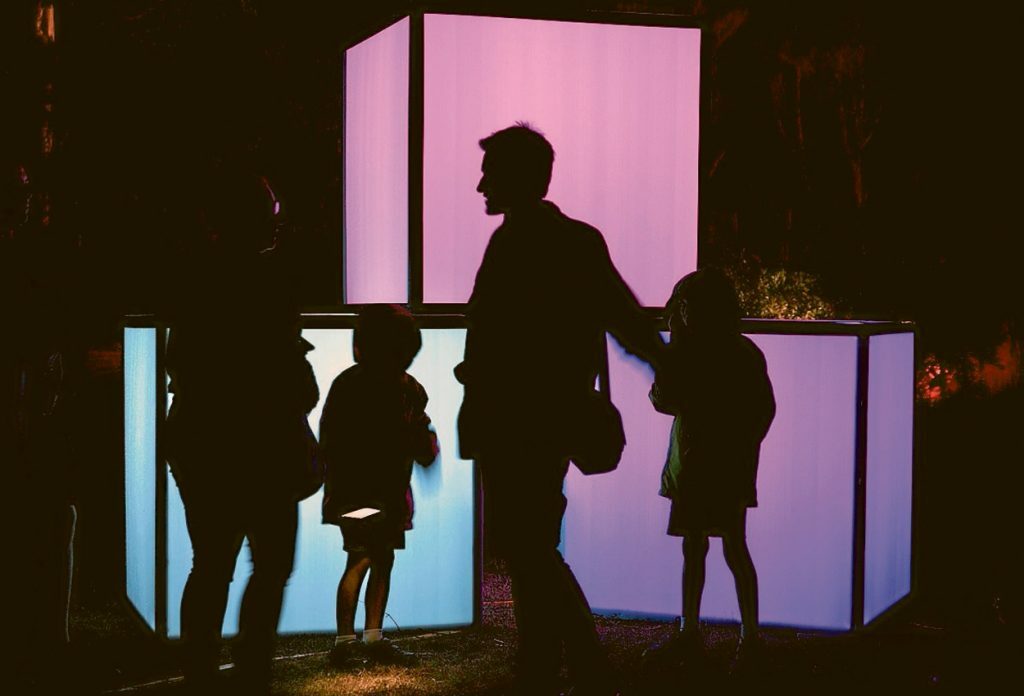 During workshops in one town, a group of women working in a beach BBQ shelter, lashed by a sudden
storm straight off the sea, continued to work on their art, drenched, engrossed and laughing with each other. In their own backyard workshops Tenby Point men created artworks out of donated red buckets, beer cans and bottles left on the foreshore by fishermen.

“I just wanted to make something really beautiful, and we’ve done it. I’m so happy,” Jill Spitz’s eyes were glistening as she watched the connection of batteries for the first time. Her idea and determination led to an entire jellyfish garden on her front fence.

“We moved the waterline communities outdoors, away from televisions and screens, and venturing into each others’ towns, looking at what each had created, and simply talking to each other. We connected people and communities in a very original way. We pushed our boundaries and stretched people’s imaginations,” observed Mary Sullivan, Project Manager and artist for Coronet Bay.

In all Small Towns Transformation projects there is an emphasis on transforming an element of life. The Edge Of Us project has chosen to place most of the investment, so far, into people. Involving as many people as possible in creating a connection to their place and each other. This is the key transformation that will hopefully pay off over time, by helping the communities to work together to create gatherings and events for the halls and community spaces that are so often left empty.

Here on the Westernport Waterline, we’re only half way through our two-year project. Planning is again underway and the best is yet to come. 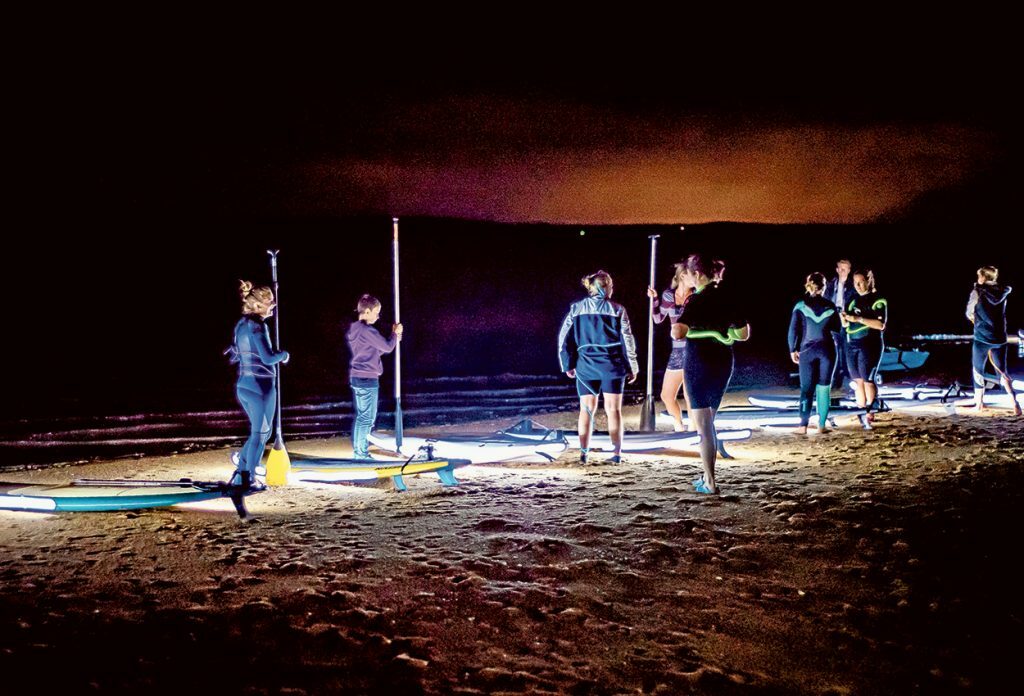