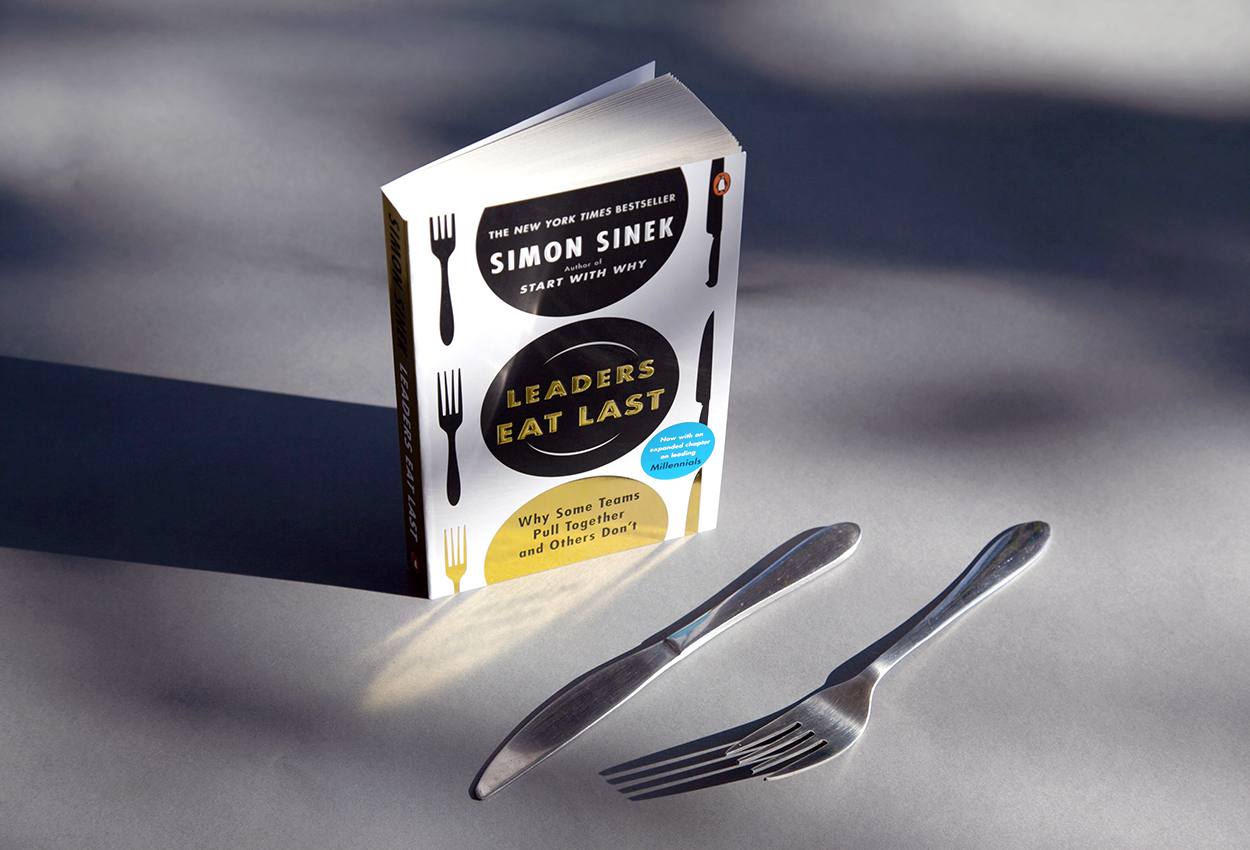 Author Simon Sinek noticed that real leadership was actually a by-product of a person’s caring behaviour towards others.

Leaders Eat Last: Why some teams pull together and others don’t.

In a world that is so busy talking about what needs to be done, it is refreshing to have a voice talking about leadership. Not only to remind us that we appreciate real leadership, but why it is sorely needed.
—

Simon Sinek tackles the subject of leadership on several different levels. He looks at how we are designed to thrive under good leadership; how our brain chemistry reinforces our desire for leadership. He reminds us that real leadership has brought us through hard times. And with stories both historical and current, he demonstrates what true leadership is. But the two things that stand out in Leaders Eat Last are Simon’s definition of leadership and the parallel he draws between being a leader and being a parent.

While trying to understand why some teams pulled together, he noticed that some people, who weren’t in positions of authority, were still leaders to those around them. Through these observations, he realised that leadership was not a position but an attitude. Simon noticed that real leadership was actually a by-product of a person’s behaviour towards others. It was their care and empathy for those they were responsible for, alongside a personal “commitment to human beings”, that brought people together to follow them.

Simon also observed that the vision of leaders who were committed to people extended beyond how people were treated, but also included aspects of health care, environmental care and wise resource management. It was a holistic view of caring for people.

In Start With Why, Simon’s first book, he inspired us to provide people with a sense of belonging through shared values. In Leaders Eat Last, he shows us how a leader’s care and empathy removes fear and uncertainty and “dramatically enhances trust, cooperation and problem solving”. Simon shares some brilliant stories that demonstrate the difference this kind of leadership makes. Two of my favourite anecdotes are of leaders who saw their workforce as extended family.

It was at his daughter’s wedding that Bob Chapman, CEO of Barry-Wehmiller manufacturing technologies, realised that just as he was handing over his daughter to be protected and cared for by her husband, his employees were also being handed over to his company to be protected and cared for by him. This insight caused Chapman to see his company as a family and “A group of people to serve and keep safe [rather than] just a labour force to be used to serve the company”.

It comes as no surprise then that when a stock market crash affected the financial success of his company, Bob chose to find other ways to keep the company going rather than sack employees. “We would never dream of getting rid of one of our children in hard times”, he said. “If anything, the whole family would [pull] together, maybe suffer together, but ultimately work through the hard times together”.

Charlie Kim from Next Jump has a similar story. Believing that “raising children provides many lessons for a company”, he chose to commit to the wellbeing of his employees for life, choosing to train and care for the people he was responsible for rather than asking them to leave if they made mistakes or did not perform well. He found that his ‘Lifetime Employment’ policy caused his managers to make better decisions about who they employed and how they handled difficulties when they arose. The result of this care was that people pulled together, and Next Jump’s growth leapt from 25% to 60% the following year.

Simon’s conclusion was that, “Everything about being a leader is like being a parent. It is committing to the wellbeing of those in our care…” and having the willingness to serve others ahead of ourselves — or eat last.

Today, a “commitment to human beings” may not be our experience, either in our families, community or workplace, but that is why now, more than ever, we need to care for each other — be willing to learn how to be “the leaders we wish we had” — and lead with compassion.

You can purchase Leaders Eat Last: Why some teams pull together and others don’t by Simon Sinek at the Reader's Emporium, Traralgon.