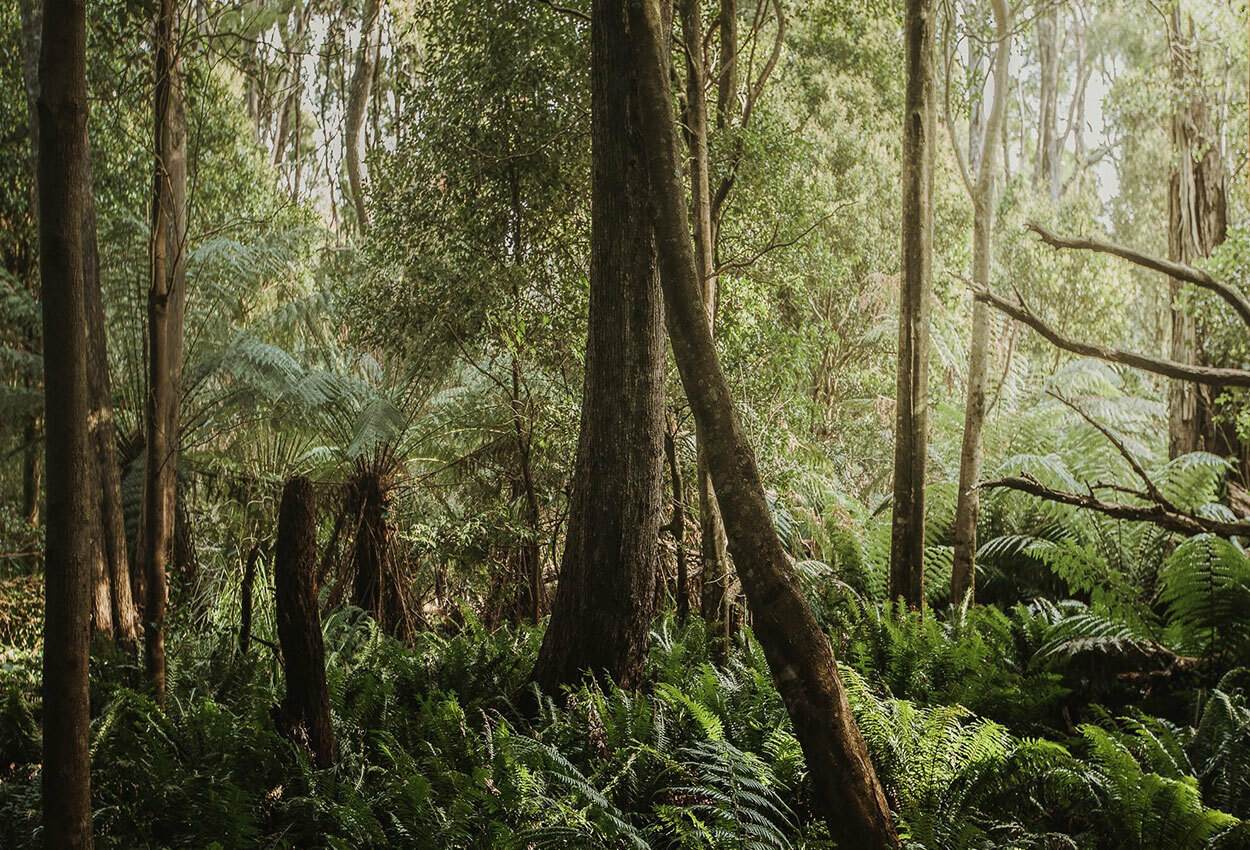 How do you see Gippsland’s forests?

The future of our forests depends on how we understand their impact on our lives. Sure, they can be places of leisure, but what about their potential to address mental health, promote community wellbeing, build new sustainable regional economies and create jobs for young people?

A Prelude — Time to Breathe.
Wherever you’re sitting right now, I invite you to experience a short breathing meditation. You’re going to take three deep breaths … As you breathe in, imagine that you’re breathing in the scent of eucalyptus oil from leaves that you’ve just crushed in your hands. When you breathe out, imagine that you’re exhaling a mouthful of dark, black smoke. In your own time, take these three deep breaths. Now we’re in a headspace for contemplation.

Introduction
Recently, I walked into an art gallery on the industrial outskirts of Copenhagen and became intrigued in an exhibition by contemporary artist Claudia Comte, titled — ‘I have grown taller from standing with trees’. Almost instinctively, my mind was transported to the grand forests of Gippsland, where mountain ash trees guard walking trails like giants and purify the air in a way that it almost becomes medicinal.

The future of our forests depends on how we understand their impact on our lives. Sure, they can be places of leisure, but what about their potential to address mental health, promote community wellbeing, build new sustainable regional economies and create jobs for young people? Let’s walk a little deeper and challenge our perceptions of the bush.

Retreat destination for your mental and physical wellbeing?
Let’s start by considering the Royal Commission into Victoria’s Mental Health System. We have some serious issues at hand: (2)

The suicide rate among Aboriginal and Torres Strait Islander people was approximately twice that of non-Indigenous Australians.
The impacts of suicide pervade our society, 25 years ago my father took his own life after a long battle with depression and anxiety. What makes me really frustrated is that 25 years later, a young teenage boy from my high school tragically fell to the same battle. Whatever we’re doing to help these people, it’s not working! Maybe it’s time to take a step back and take a fresh look at things. Many argue that the root causes of this suffering is a severe disconnection from community and nature. So, could spending time in Gippsland’s forest assist people suffering anxiety and be used as a preventative practice for those in good health?

Japanese people believe so. In the 1980s their government department for agriculture, forestry and fisheries started advocating for a form of exercise called Shinrin-yoku (forest bathing). Essentially it means ‘to take in the “atmosphere” of a forest’. Fast forward 30 years and now Professor Qing Li, Vice-President of the International Society of Nature and Forest Medicine, is sharing the concept with the world. In his 2018 book, Forest bathing: How trees can help you find health and happiness (1) Professor Li lists the following benefits of forest therapy:

OK, sounds good, but what do you actually do? Firstly, leave your clothes on! Secondly, forest bathing is not like typical bushwalking so you’re not in a hurry to get to the top of a mountain. Instead you’re invited to walk mindfully through a forest and breathe in special oils that are naturally released from plants. These oils are called ‘phytoncides’ and plants use them to protect each other from bacteria, insects and fungi. It turns out they that can protect us too. Remember the bottle of eucalyptus or tea tree oil in your cupboard? Perfectly applied in aromatherapy or perhaps for household cleaning.

The importance of the air we breathe certainly isn’t limited to our potential exposure to positive phytoncides, the World Health Organisation (WHO) states that, “of all the air pollutants, fine particulate matter has the greatest negative effect on our health, contributing to higher incidence of asthma, lung disease, heart attacks, cancer and strokes. About 90 per cent of people living in cities are exposed to particulate matter in concentrations that are higher than those allowed in the air quality guidelines set by the WHO. It was estimated that air pollution from particulate matter caused three million premature deaths in 2012, and that pollution from particulate matter will claim 6.2 million lives a year by 2050, when so many more of us will be living in cities and megacities”.

Simply, clean air is our lifeblood. Gippsland’s forests provide us, locals, with clearer air but it’s possible that city-based people will soon want to start travelling to our region to experience this undervalued resource. Northwestern Tasmania and King Island have marketed the merits of unsullied air for a while now, could we do similar? Especially if we make a push to protect and expand more regions of our bush.

These concepts centred around boosting our mental and physical health through time in the trees is taking off elsewhere too. While researching world-leading wellness tourism benchmarks, supported by the Victorian Tourism Industry Council’s Lynette Bergin Fellowship, I came across a fascinating healthcare initiative called ‘social prescribing’. In Cornwall, local doctors prescribe patients experiencing anxiety and high levels of stress a visit to an extraordinary English garden called the ‘Eden Project’. About 100 patients per week partake in the social prescriptions program called ‘Nature’s Way’, where they attend group gardening sessions, to build new relationships, get creative and help with their physical or mental health and wellbeing. The Scottish National Health Scheme prescribes ‘birding, rambling and beach walks’ in the same way.

Twenty years ago, the Eden Project was a desolate coal mine, but through bioremediation techniques the site now boasts vast Rainforest, Mediterranean and English-themed landscapes. What an incredible transformation. I’m right behind the proposal to establish the Great Latrobe Park at the former Hazelwood Coal Mine site.

It turns out that innovative leaders like Neil McCarthy of consultancy firm Mosaic Insights are already exploring what a similar social prescription program could look like in Australia. Neil was part of the team responsible for coining Parks Victoria’s tagline ‘Healthy Parks, Healthy People’ and is now advocating for what he calls ‘green scripts’.(3)

“Victoria has the opportunity to establish an evidence-based nature health script system that is comparable to the scripts we get for medication from our GPs. The evidence that exposure to nature improves human health and wellbeing has been well established for decades, and significant progress has been made around the world. Green Scripts need to be designed based on rigorous scientific evidence to the same standard we expect when we have open-heart surgery or a knee reconstruction. Building on Victoria’s emerging spa and wellness tourism products and their broader interconnection with nature will be an important element in developing the Green Script concept in Victoria.”

Green Scripts could become another recognised tool in our toolbox for addressing mental health.
More systematic changes could be made too. The New Zealand government recently announced their new Wellbeing Budget, which aims to measure community health alongside financial indicators and then push the growth of both metrics. Between us, I think we’ve stolen a couple of great ideas from our cousins across the ditch before - why don’t we consider ‘borrowing’ this one too?

Carbon bank?
Another perspective on Gippsland’s forests is that given the United Nations and local municipalities like Melbourne City Council have declared a state of ‘climate emergency’, we sit on a knife’s edge. (Picture the queendoms and kingdoms in Game of Thrones preparing to fight the ‘white walkers’ … or maybe that’s just my imagination running wild). In a region where people have spent more than a hundred years trying to cut all the trees down, is it too radical to think that we could now see these trees as our greatest asset?

What if protecting our existing forests and planting new ones was a way of balancing the books for Victoria’s carbon expenditure? What if carbon banking was the newest arm of the Parks Victoria’s business model? If so, we could start looking at proposals for the Great Forests National Park or the East Gippsland Forests National Park with new eyes.

Future office?
Gippsland is in a state of rapid change. It is challenging our identity and the industries that we’ve grown up depending on. Through my tourism research, I noticed that young people around the world are disrupting the market by using Airbnb Experiences to kickstart new tourism businesses at relatively low cost. Here’s an idea for any budding Gippslandian entrepreneurs, why not start your own forest bathing tours using this global marketing platform? An easy first step could be posting stunning photos of our local forests on your new business Instagram account. Why not reach out to the team at Startup Gippsland and see if they can help you map out a business plan? While you’re at it, why not advocate for Destination Gippsland to mark out some stunning forest bathing trails on its next tourist maps?

Wrapping Up
Gippsland’s forests are not only beautiful and rich in biodiversity but they also embody opportunities for future healthcare, tourism and carbon economics. Challenging our perceptions about how we live with ‘wilderness’ could help us overcome some of the grand challenges that the world currently faces. I see, and genuinely believe, in Gippsland’s potential to become a world leader in regenerative tourism and land management. We can simultaneously increase biodiversity, wellbeing and the economic growth of our vibrant region.

Acknowledgement
I acknowledge the Aboriginal people of our beautiful region, who have cared for its land and seas for millennia.